Canberra Airport comeback continues; traffic up 5.0% during first half of 2018, 10 direct routes served this summer 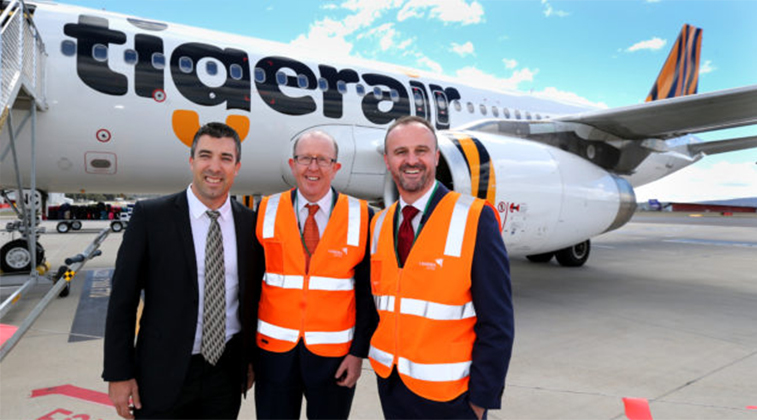 Canberra Airport welcomed 3.11 million passengers in 2017, 6.7% up on the previous year. Results for the first half of 2018, suggest it will enjoy its third successive annual increase in traffic this year. Domestic links continue to dominate the departure boards, accounting for 97% of all passengers in 2017. Tigerair Australia added a new service from Brisbane last September.

Canberra is located in the Australian Capital Territory in the southeast of the country, between Sydney and Melbourne. The capital city’s airport was the eighth largest in Australia in 2017, based on passenger numbers, placing it between Cairns, which was seventh in the rankings, and Hobart in ninth.

In 2008, Canberra handled 2.98 million passengers and this had increased by 4.1% to 3.11 million per year in 2017. However, this only tells one part of the airport’s growth story during this period. From 2008 to 2010 Canberra saw an 11% increase in traffic, with passenger numbers rising to 3.30 million in 2010. They have not reached this level again since. From 2010 to 2015 traffic was in constant decline, with five consecutive years of negative growth. Passenger numbers subsequently fell 15% over the period, reaching a low of 2.81 million in 2014 and 2015. One of the main factors in this drop-off was the reduction and eventual withdrawal of Tigerair Australia capacity. The LCC cut back its seat numbers at Canberra from 2009 to 2011 and withdrew services altogether from 2012, before recommencing flights in 2016. This corresponded with the airport’s first year-on-year increase in traffic since 2010. A second consecutive year of growth followed in 2017, which led to passenger numbers exceeding the 3.00 million mark for the first time since 2012. 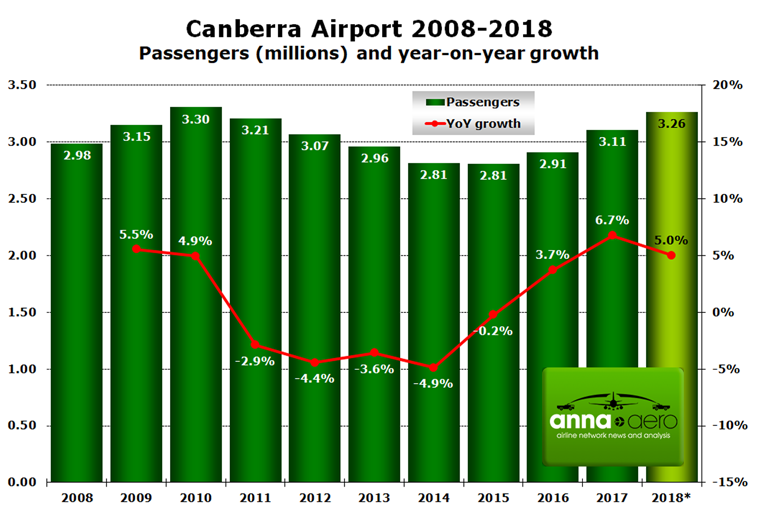 Source: BITRE. 2018 figure is based on anna.aero forecast.

Traffic figures for the first half of 2018 suggest that Canberra is in line for its third straight year of growth. During the period January to June, passenger numbers are up 5.0% compared to the equivalent period last year. If this growth rate is maintained for the rest of the year, the airport can expect to welcome around 3.26 million travellers in 2018 (highlighted in light green), its highest number since 2010.

Domestic services provide the overwhelming majority of Canberra’s passengers There were no international travellers at all from 2008 to 2015, and in 2017 they only accounted for 2.7% of the airport’s total traffic.

Six carriers offered direct scheduled services from Canberra over the course of S18, of which four are Australian-registered operators. Four of the serving airlines are full-service carriers, while there is also one LCC and one regional operator. Qantas and Virgin Australia Airlines are the largest carriers at Canberra, accounting for 86% of the airport’s departing seats combined in S18. Both carriers operate purely domestic networks from the Australian capital, and they compete with each other on the links to Adelaide, Brisbane, Melbourne, Perth and Sydney. Despite operating 625,000 fewer seats than Qantas on flights serving Canberra, in S18, Virgin Australia offers six destinations, compared to five from the flag carrier. Qatar Airways is the largest international operator at the airport this summer, despite only commencing services in February 2018. The Middle-Eastern airline offers daily services to its Doha hub, with flights to and from Canberra operating via Sydney. 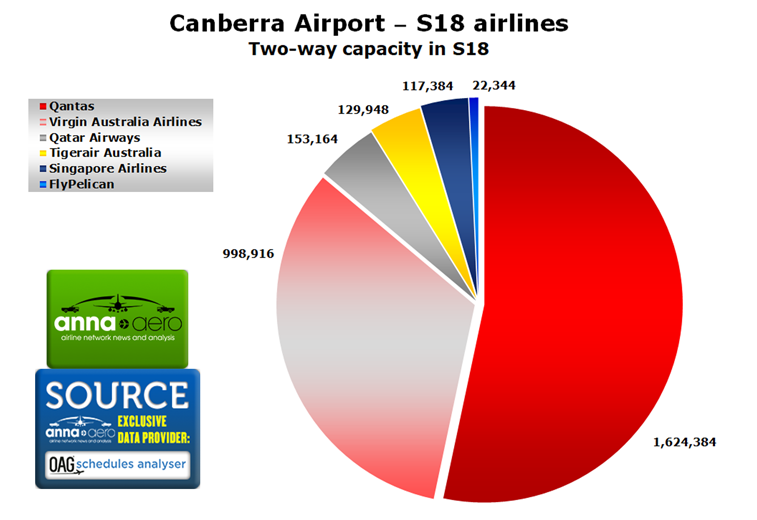 Of the five airlines that served Canberra in S17, Tigerair Australia and Virgin Australia have added capacity this summer, FlyPelican and Singapore Airlines have cut seat numbers and Qantas has maintained the status quo. The biggest increase in seats came from Tigerair Australia (45% up), with the LCC adding capacity on its domestic connections to Brisbane and Melbourne. The biggest cuts came from FlyPelican, which actually added flights to Newcastle, but reduced its capacity to Dubbo, resulting in an overall reduction in seats of around 12.5%.

There are 10 direct destinations on offer from Canberra in S18. Nine of these are domestic links, with Melbourne and Sydney seeing by far the most available capacity this summer. OAG data shows that three airlines will offer 110 combined weekly scheduled flights from Canberra to Melbourne. Although schedules show that there are around 485,000 one-way seats available to Sydney in S18, it should be noted that about 16% of these (highlighted in purple) are flown by Qatar Airways as part of its one-stop service to Doha. Qatar Airways does not sell capacity on the Canberra to Sydney sector, so these seats are essentially an indirect offering through to its Doha hub. The only direct international link from Canberra is Singapore Airlines’ service to its home hub, which was the airport’s fifth largest route in S18. 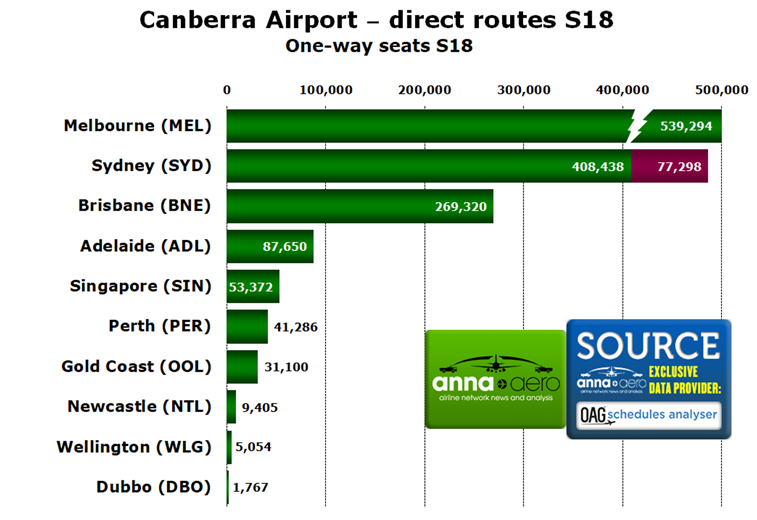 All 10 routes offered from Canberra this summer were also operated in S17. Most of these saw an increase in capacity in S18, with the largest growth coming on services to Singapore (73% up), due to additional frequencies from Singapore Airlines. The Singaporean flag carrier also amended its itinerary between Canberra and its home hub in May. Previously sold as the Capital Express service, the route operated Singapore – Canberra – Wellington – Canberra. The new itinerary operates Singapore – Sydney – Canberra – Singapore. The only two destinations to experience a reduction in capacity were Wellington (81% down) and Dubbo (55% down). The New Zealand capital is no longer served after Singapore Airlines changed its itinerary for its hub link in May. 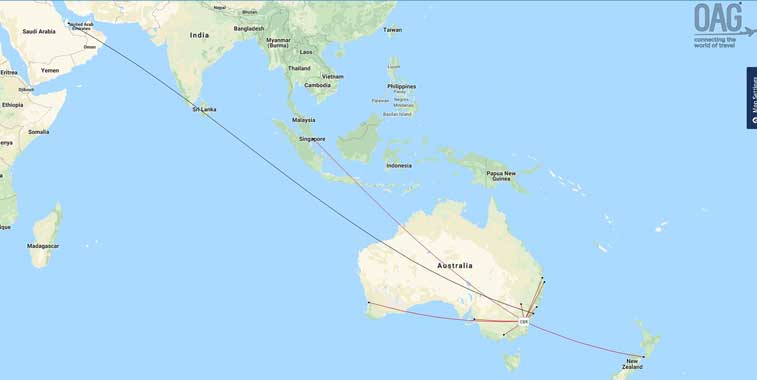 There are 10 direct routes from Canberra in S18, nine of which are domestic links. The biggest routes by capacity are Melbourne and Sydney. The only direct international connection is Singapore Airlines’ daily service to its home hub. Qatar Airways introduced an indirect link to Doha in February (highlighted in black), but this operates via Sydney in both directions.