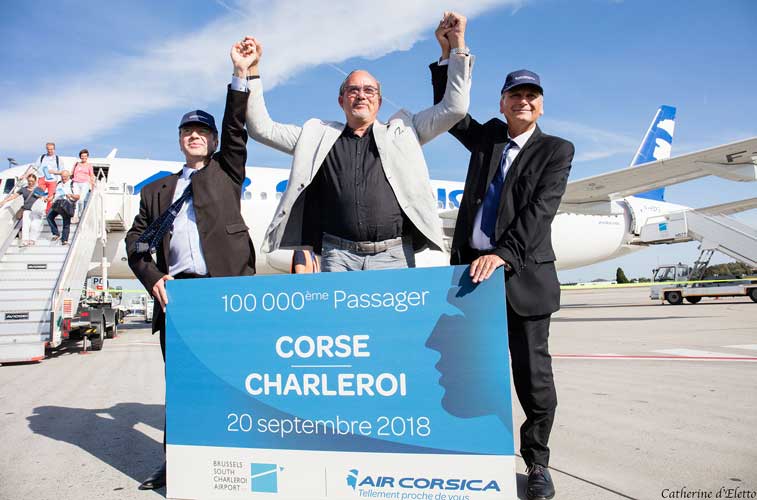 On 20 September, Air Corsica and Brussels Charleroi celebrated hitting the 100,000 passenger mark on services between the Belgian airport and Corsica. The winning traveller was on-board a flight from Ajaccio to Charleroi and received the prize of a year of free flights from the Brussels airport to the French island. Greeting him in Brussels were: Hervé Pierret, Member of the Board, Air Corsica and Philippe Dandrieux, Chairman of the Board, Air Corsica. The Corsican carrier has been flying from Charleroi since March 2017, beginning with services to Ajaccio and Bastia, before adding a link to Calvi in S18. Jean-Jacques Cloquet, CEO, Brussels Charleroi Airport, said: “After just over a year of activity, and an excellent partnership between Air Corsica and Brussels Charleroi Airport, we are absolutely thrilled about the milestone that we have reached today. We are proud to have made it possible for more than 100,000 passengers to travel between Corsica and Belgium. This shows that demand for the Isle of Beauty really was there, and passengers were keen to make the most of the opportunity. Air Corsica is one of Brussels Charleroi Airport’s finest successes, and Corsica, with its many beautiful attractions and lovely climate, boasts huge potential for Belgian travellers. We are thrilled with the growth of Air Corsica’s operations at Brussels-Charleroi, and the decision to expand flights to Corsica to cover the whole year”. 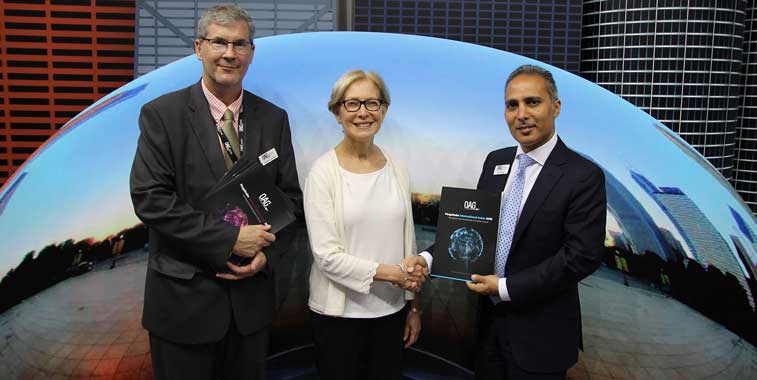 OAG’s Chief Product Officer, Vipul Nakum (right) congratulates Chicago O’Hare International at World Routes in Guangzhou for being the most connected airport in the US, and second best connected in the world, according to OAG’s Megahubs Index 2018 report. This is O’Hare’s third successive stint at the top of the US rankings. 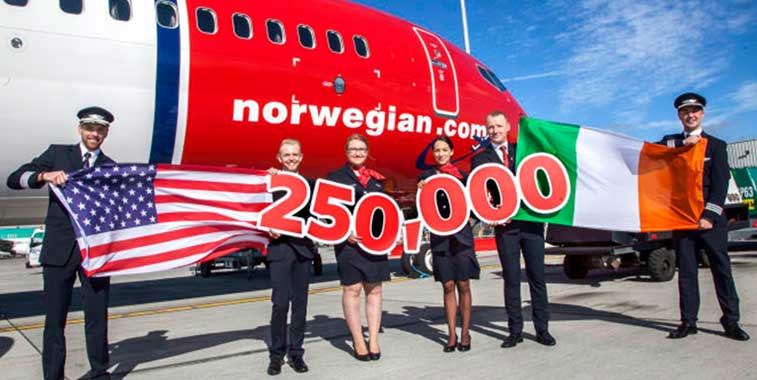 Norwegian and Dublin Airport celebrated a significant milestone on 25 September when they marked flying more than 250,000 passengers from Irish hub on transatlantic services to the New York and Boston areas. This has been achieved in the space of 14 months on its connections to Providence and Stewart. “Reaching the 250,000 passenger milestone on two new services to the US in a 14 month period is a remarkable success story,” said Vincent Harrison, MD, Dublin Airport. “We are delighted to play our part in offering US pre-clearance facilities to Norwegian’s US passengers so all the necessary customs and immigration checks are completed at Dublin Airport before arrival into the US. We wish Norwegian continued success on its route network at Dublin Airport.” To celebrate the passenger milestone, Norwegian will give away a pair of tickets to its newest destination from Dublin Airport – Hamilton which is located nearby Toronto, Canada and other tourist attractions including Niagara Falls.