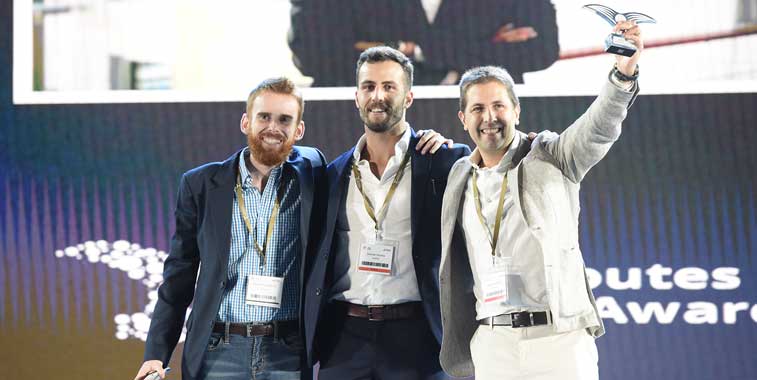 Vueling’s Director Network Strategy, Development & Planning, Gabriel Schmilovich (right) won the individual prize at the World Routes Marketing Awards in Guangzhou on 17 September. His airline is one of the biggest LCCs in Europe with a fleet of 113 aircraft. Its third largest base in 2018 is Paris Orly.

Vueling is one the biggest LCC’s in Europe, with data from Flightradar24 indicating that it currently operates a fleet of 113 aircraft including: five A319s, 92 A320s, 15 A321s and a single A320neo. Paris was the location of the Spanish-registered airline’s first foreign base back in 2007, but that was at Paris CDG. In 2009 Vueling also began scheduled services from Paris Orly. The French capital’s secondary hub is now the LCC’s third largest base, and its second biggest outside of Spain, according to schedule capacity data. This places it after Barcelona and Rome Fiumicino, but ahead of Palma de Mallorca in the carrier’s base rankings. anna.aero takes a look at Vueling’s Orly operations over the past 10 years.

In 2008, Vueling did not offer any scheduled services from Orly. This changed the following year, with flights being introduced from July onwards, and the carrier has been growing its presence at the Parisian airport ever since. From 2009 to 2018 it consistently increased its annual capacity at Orly, with growth peaking at 132.6% in 2010. This clearly needs to be seen in context, since the carrier was only operating from the airport for six months in 2009. Since 2010, the annual year-on-year growth rate has been an impressive 10%, although this is slightly skewed by a 39% boost in capacity during 2012. Capacity has more than doubled from 1.74 million two-way seats in 2010 to 3.59 million in 2018. 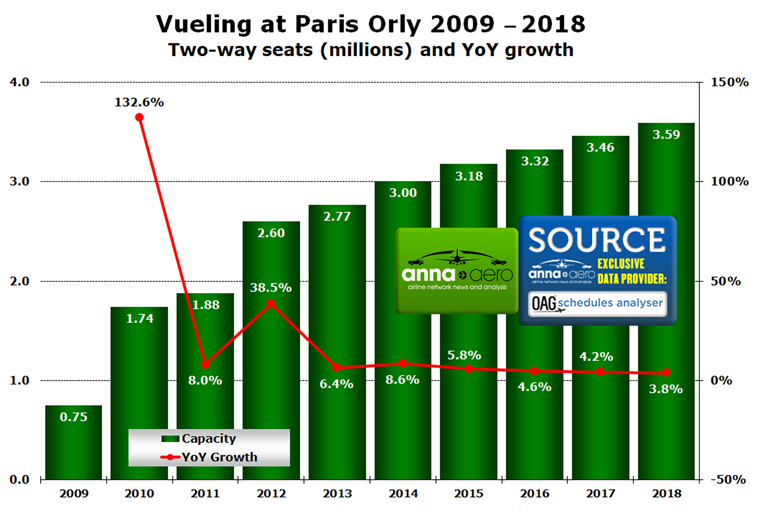 Vueling is the fourth largest carrier at Orly based on available seats in 2018. It offers considerably less capacity than Air France and Transavia France, but only marginally less than easyJet. For the four-year period of 2011 to 2014, it was the third largest carrier, before being overtaken in 2015 by Transavia’s French unit. Vueling’s market share of all scheduled two-way seats serving Orly has increased from 2.3% in 2009, to 8.7% this year.

Vueling will operate scheduled flights to 19 destinations over the course of 2018, although two of these are no longer served. Regular flights to Birmingham ended last October, although several flights were scheduled around the Christmas holiday and new year period. The Catania connection was also ended in January. The peak number of scheduled destinations served from Orly was 27 in 2015. Although seat numbers continue to increase, the number of direct destinations the airline offers has declined in recent years. It should be noted that over the period 2009 to 2018, some of the destinations recorded here may have been served by limited or irregular flights, possibly because they were scheduled charters. All of the LCC’s routes from Orly since 2009 have been international links. 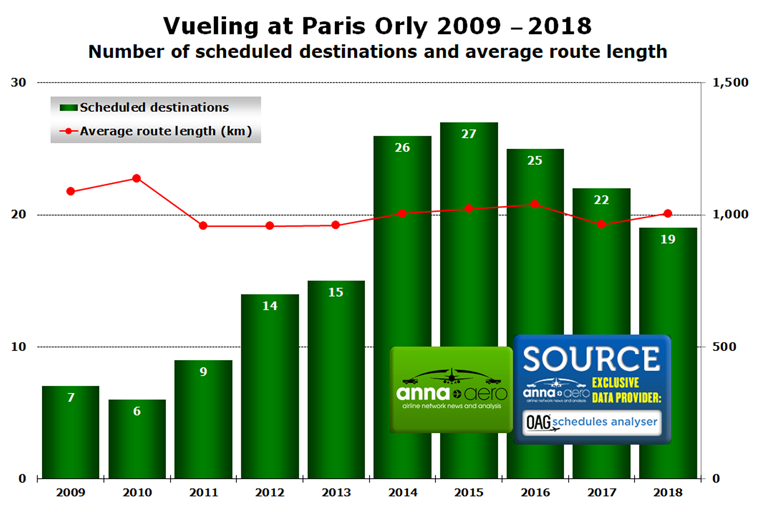 Vueling’s top 12 routes from Orly in 2018, based on one-way seats, include six Spanish destinations, three in Italy, two in Portugal and one in Denmark. These are the only four country markets served by the carrier from the Parisian airport. Spain is the biggest destination market, accounting for 62% of the LCC’s departing seats from Orly this year. Barcelona is the largest route by a long way, representing one-third of Vueling’s capacity from the airport in 2018. During the week commencing 25 September, the LCC will offer 67 flights to the Catalonian city, with the number daily departures ranging from eight to 10 depending on the day of week.

Vueling currently operates from CDG as well as Orly. Over the course of S18 there were five destinations that the carrier served from both Parisian airports: Malaga, Barcelona, Bilbao, Fiumicino and Ibiza. There were a further 12 routes operated from Orly that were not flown from CDG and 10 links from CDG that were not offered from Orly. 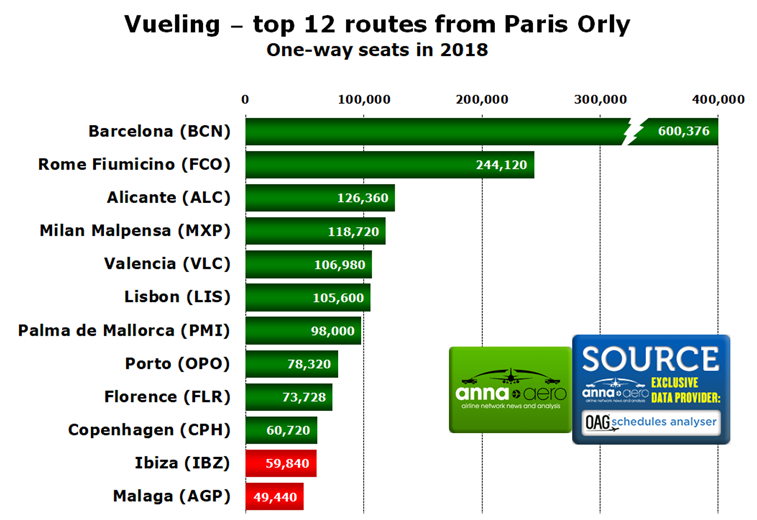 The LCC’s 10 largest links from Orly all experienced an increase in capacity for 2018, compared to the previous year. The strongest increase among these came on services to Copenhagen, but this is due to the fact that the Danish destination was only inaugurated in late October 2017. The biggest growth among the more established routes came on flights to Valencia, which saw an 18% year-on-year boost in capacity. Only two of the top-ranked routes witnessed a decline in seat numbers (highlighted in red). The largest cuts came on the Malaga route with capacity down by nearly one quarter. 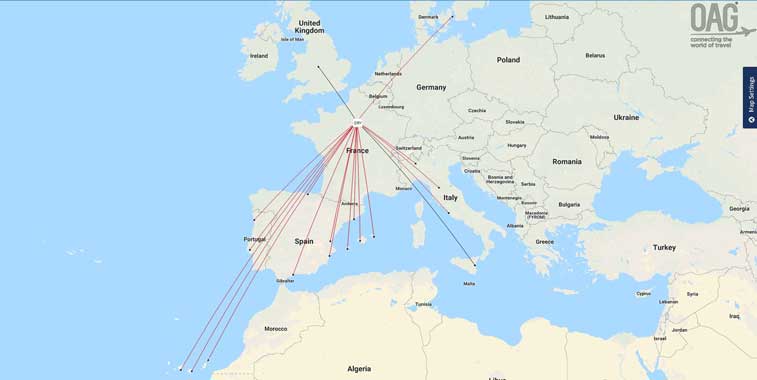 Vueling’s Paris Orly network map for 2018 emphasises the predominance of Spanish services. The LCC serves four country markets from Orly, with Spanish links accounting for 62% of its departing seats from the Paris airport in 2018. Services to Birmingham and Catania (highlighted in black) have subsequently been withdrawn.