Phuket Airport traffic grows 195% in 10 years; LCCs account for 44% of passengers; VietJetAir among many carriers launching flights in 2018 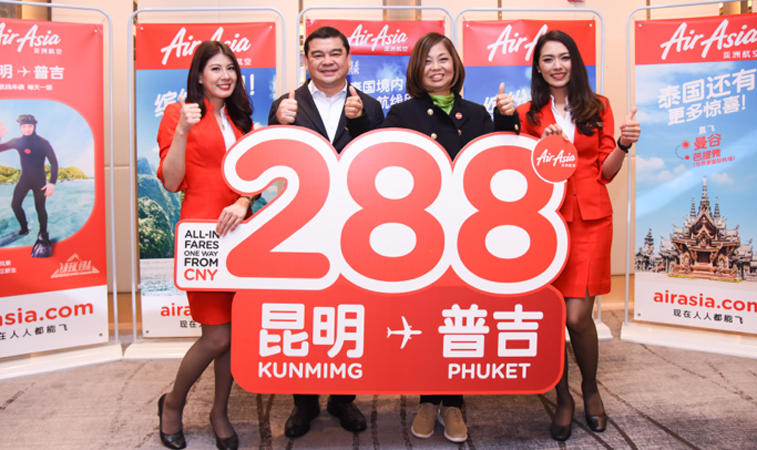 Back in February Thai AirAsia launched a daily service between Phuket and Kunming in China. Among those at the launch along with the crew were Santisuk Klongchaiya, CEO of Thai AirAsia, and Kathleen Tan, President China, AirAsia. Last year Phuket handled just under 16.85 million passengers, with 44% of those travellers flying on low-cost carriers.

Phuket Airport lies on the island of the same name in Southern Thailand, and its serves a market which greeted 8.4 million incoming tourists in 2017, up 11.3% versus 2016. This was mainly driven by a 20% surge in Mainland Chinese travellers to the island and a rising number of visitors during the low season according to a report by consulting group C9 Hotelworks. The popularity of Thailand with the adventurer and young traveller has become evident in recent years, and the results of this growth is clearly seen in Phuket Airport’s booming passenger statistics.

Phuket Airport handled 16.85 million passengers last year, up by over 11% versus the 15.11 million it handled in 2016. Of those passengers that passed through the airport in 2017, 44% flew on a low-cost carrier. Back in 2008, 28% of passengers from Phuket flew on LCCs, with the business model increasing its market share by 16 percentage points during the past decade. Overall since 2008, the number of passengers passing through Phuket during a calendar year has risen 195%, with the airport having processed only 5.70 million passengers in the earliest year analysed (2008). 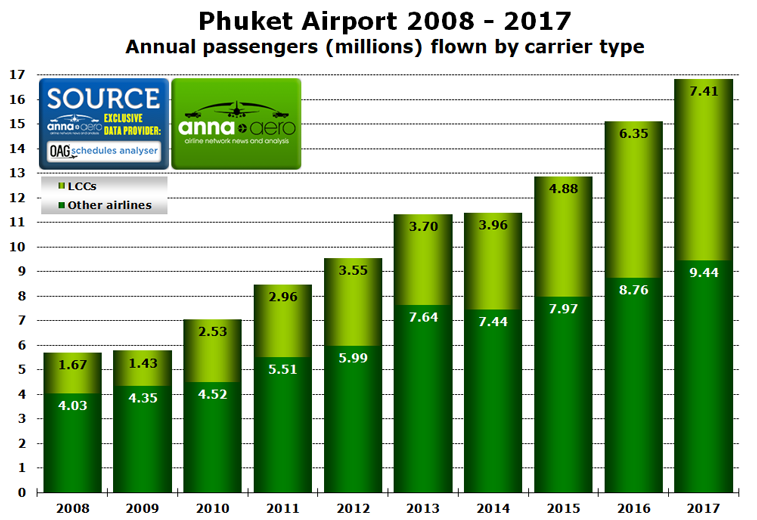 Phuket’s leading airline is Thai AirAsia, with the AirAsia Group carrier presently operating 11 routes from the Southern Thailand airport, utilising 198 weekly flights. It’s leading service from Phuket is Bangkok Don Mueang, with the link to the Thai capital accounting for 59% of the airline’s departures from the former airport. After Don Mueang, Chaing Mai, which will host Routes Asia in 2020, is the second biggest service, with the route to the Northern Thailand airport representing 11% of the carrier’s departures. Overall Thai AirAsia has grown seat capacity from Phuket by 10% this summer versus S17. 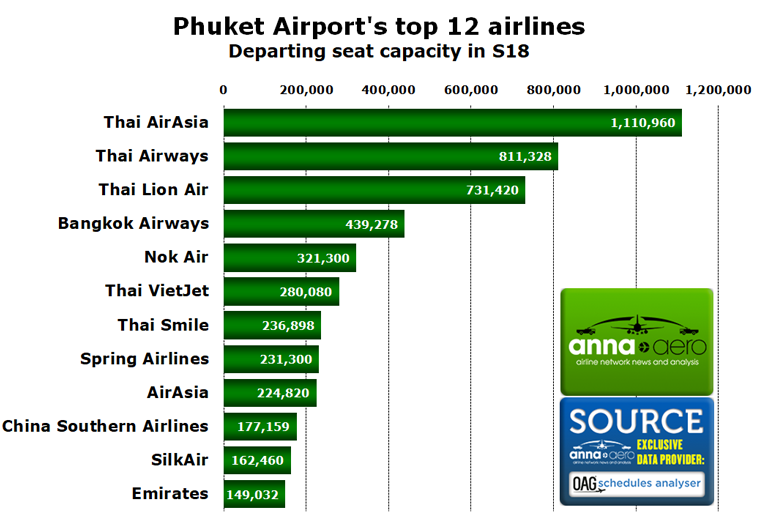 The airport’s second largest airline is national carrier Thai Airways, with the Star Alliance member operating four routes from Phuket this summer, including a three times weekly long-haul service to Frankfurt. It’s other routes are to Bangkok Suvarnabhumi (66 weekly flights), Beijing and Hong Kong (both daily in S18). The airline’s low-cost subsidiary Thai Smile also operates from Phuket, with it offering 36 weekly flights to Suvarnabhumi, plus a daily link to Chiang Mai and a weekly route to Lanzhou during the week commencing 2 October. From 28 October, the airline will launch a daily connection to Hong Kong. The largest international carrier at Phuket is Spring Airlines, with it offering 20 weekly flights from Shanghai Pudong, along with a daily connection from Chengdu. It also offers regular scheduled charters to a number of destinations from its home market of China.

The biggest new airline at Phuket this summer is VietJetAir, an associate company of Phuket’s sixth biggest airline Thai VietJet. The Vietnamese airline added Phuket to its network in December, launching a daily connection from Ho Chi Minh City. Along with VietJetAir, other carriers which have launched flights to Phuket since S17 include Nord Wind Airlines, Hebei Airlines and Myanmar National Airlines. Unfortunately the latter carrier, which launched flights to Phuket on 25 March, only operated 20 flights on its service from Yangon before pulling the route. It flew the 2,235-kilometre connection twice-weekly using E190s.

Bangkok is by far the leading destination from Phuket, with the two airports serving the capital of Thailand taking the top two places on the network podium. Between Suvarnabhumi and Don Mueang, the two account for 40% of all seats flown from Phuket. The number of seats being flown to Suvarnabhumi this summer increased by 11% versus S17, while capacity to Don Mueang grew by 7.5% during the same period. This led to a 9.2% increase in capacity to Bangkok from Phuket this summer. 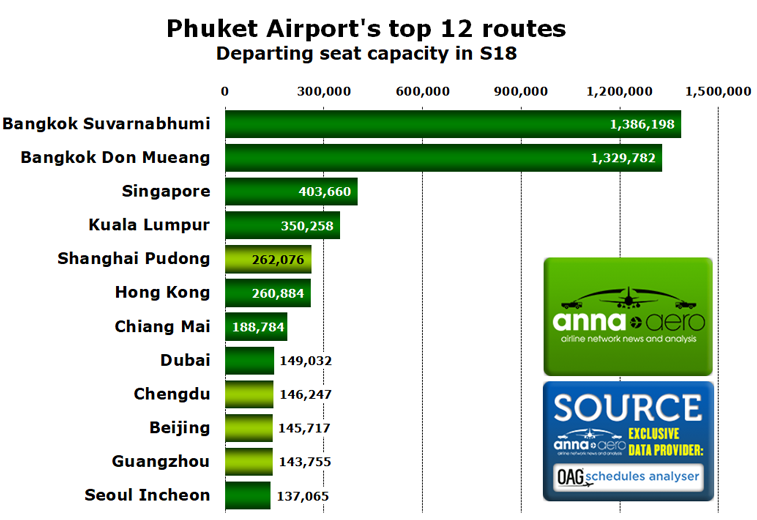 Of Phuket’s top 12 routes, four of them (highlighted in light green) are destinations in China, with the latter nation the leading provider of international tourists to Thailand, with just under 9.81 million Chinese tourists heading to Thailand in 2017, according to the latter nation’s Ministry of Tourism & Sports statistics. Of the four routes, new to the top 12 for S18 is Chengdu, with seat capacity to the Sichaun Province city having more than doubled, a result of Spring Airlines launching daily flights on the city pair on 25 March, while Nok Air also operated more weekly flights this summer versus S17. Overall 24% of departing seats from Phuket this summer were designated for routes to China.

The only long-haul connection to make the top 12 at Phuket is Dubai (eighth largest route), a link flown daily by Emirates. When referencing OAG Traffic Analyser data, the carrier’s top five connection points for traffic via Dubai in 2017 included Paris CDG (14,140 one-way passengers in 2017), Munich (10,070), Frankfurt (9,990), London Gatwick (8,920) and Manchester (8,140). Along with Emirates, Phuket is also served by fellow MEB3 members Qatar Airways and Etihad Airways. 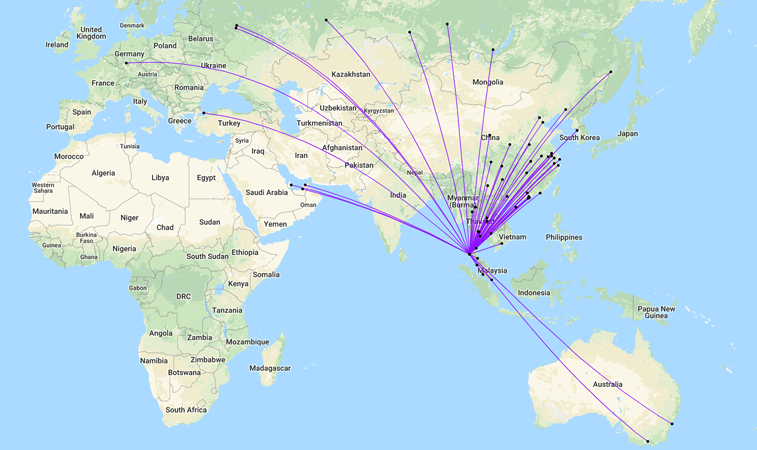 Phuket Airport’s route map shows the domination of the Chinese market at the airport. In S18 Chinese routes accounted for 24% of all departing seats from Phuket, with Chengdu becoming a new destination in the Thai airport’s top 12 destinations, with capacity to the Sichuan Province airport more than doubling when compared to S17.