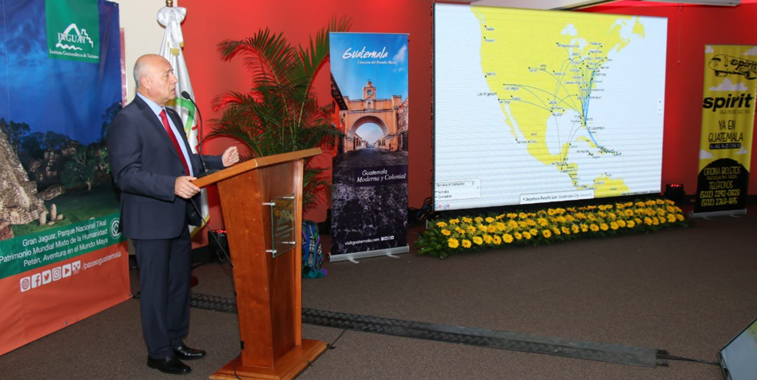 In July, Spirit Airlines announced that it would launch flights to Guatemala City from Houston Intercontinental, a route that began on 7 September. Pictured at the press event to confirm the news is Manuel Jaquez, Senior Manager Commercial, Latin America, Spirit Airlines. The route is one of two new additions to the carrier’s route map from the Texas airport in 2018, with the other being San Salvador. Both are routes presently flown by United Airlines, and when the ULCC ends flights to Oakland next month, the USB3 carrier will compete on all of Spirit’s routes from Houston.

Spirit Airlines is one of the leading airlines at Houston Intercontinental (IAH), and data for 2018 confirms that the ULCC is the airport’s second largest operator behind United Airlines, with the former accounting for 5.6% of departing seats this year. While on this view the carrier’s market share at IAH is very small, when you look at just the low-cost seats from the airport, Spirit controls 80% of the sector. It should also be noted that Southwest Airlines has a major base at Houston Hobby Airport, meaning that the LCC market at Intercontinental is minimal at present, accounting for just 7.0% of all seats.

During the first quarter of this year, Spirit transported 450,275 passengers from IAH, an 18% increase versus the 381,955 people it flew from the Texan hub during the same quarter of 2017. The result is also 4.6% greater than the number of passengers that flew with the ULCC from Houston in Q1 2016. The reason this is significant is that, during the first part of 2017, the carrier reported a dip in traffic, with passenger numbers falling 11% in Q1 2017 versus Q1 2016. 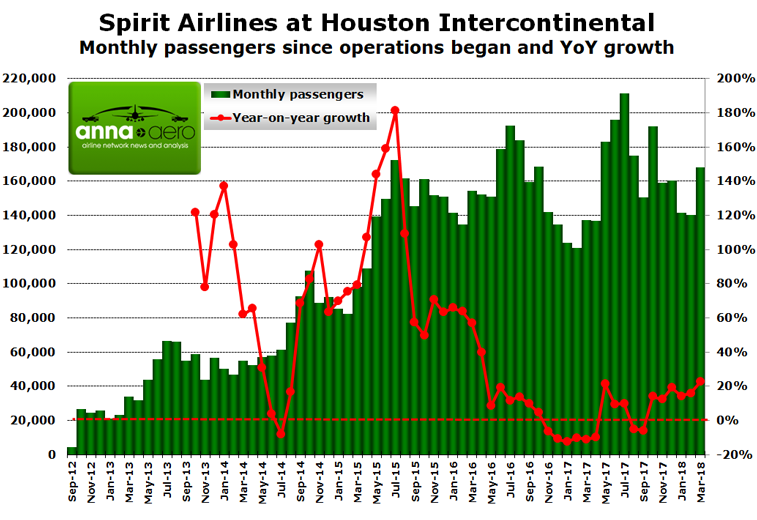 Overall last year Spirit Airlines carried just shy of 1.95 million passengers from IAH, meaning 8.2% of all the airline’s traffic flew on services to and from the airport in 2017. Last year, 40.73 million passengers travelled through Intercontinental, meaning that 4.8% of the airport’s customers will have flown on a flight operated by Spirit. The market share achieved by the ULCC is a 0.2 percentage point improvement from the 4.5% it recorded in 2016, with this a result of the airline growing its passenger numbers from IAH, but also due to the airport seeing its overall numbers falling by 2.3% from a total of 41.69 million in 2016.

Spirit Airlines has grown its network to 20 destinations from IAH in 2018, with this year’s additions being Guatemala City and San Salvador, both having launched in early September. However as most network planners will know, networks need to be constantly monitored and reviewed, and unfortunately not all routes flown in 2017 made it into this year’s schedules, with services to Pittsburgh having ended on 6 November 2017. An analysis of the carrier’s schedules for W18/19 also indicates that the airline will be ending non-stop services between IAH and Oakland on 5 November, with this being the last day available to book a direct flight when referencing the airline’s booking engine. Other routes also not operating this winter are Minneapolis-St Paul and San José del Cabo, however it would appear that these routes are flown on a seasonal basis.

Looking at the airline’s current network from IAH, six of the 20 routes it operates see more than a daily frequency, with the top destination being Las Vegas, with the carrier operating a three times daily service between Thursdays and Mondays, while Tuesdays and Wednesdays see a twice-daily service during the period analysed. Along with Las Vegas, Los Angeles, Baltimore/Washington, Chicago O’Hare, Orlando and Fort Lauderdale are the other routes to see more than one daily rotation. 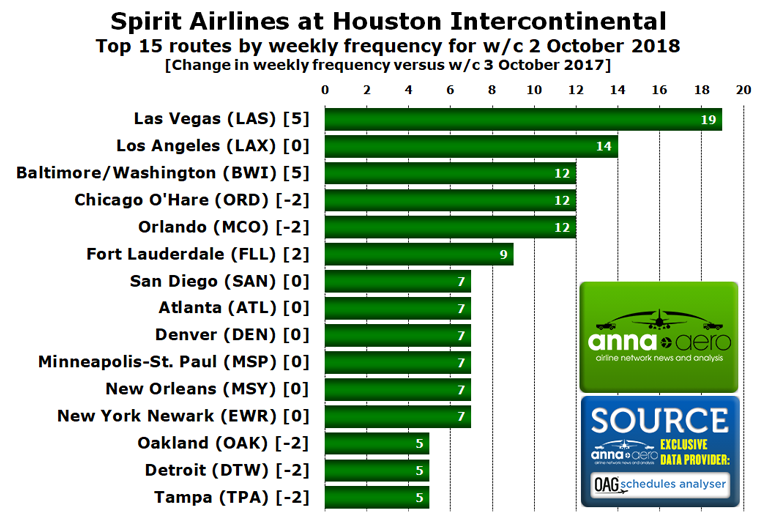 Las Vegas was one of two routes in the carrier’s top 15 from Houston to see a solid increase in services this year, with this connection, along with Baltimore/Washington, seeing an extra five weekly flights. However, five routes within the top 15 have also seen a cut in operations, with Chicago O’Hare, Orlando, Oakland, Detroit and Tampa all seeing two weekly flights dropped. Overall however, during the week commencing 2 October 2018, the number of weekly flights departing IAH has increased by 5.7% versus the same week of 2017.

All routes compete with United

Once flights to Oakland end next month, it will mean that all routes flown by Spirit from Houston this winter will face direct competition from United. The latter offers three and a half times as many rotations on the routes, with 664 weekly departures versus the ULCC’s 148. 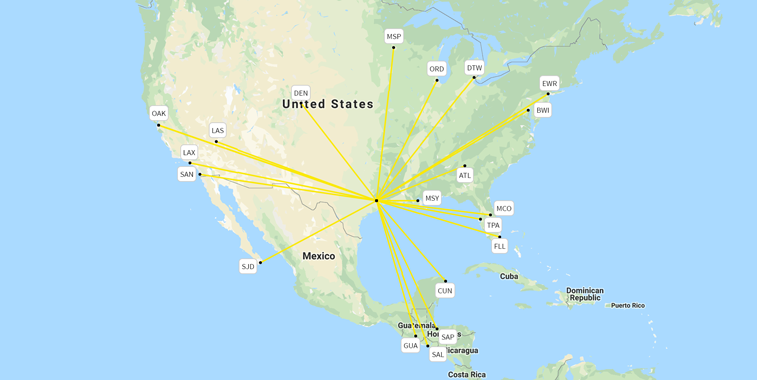 Spirit Airlines launched from Houston Intercontinental in 2012. During the six years it has been serving the airport it has grown its network to 20 routes, with new additions in 2018 being Guatemala City and San Salvador. One route that will be dropped from the network in W18/19 is Oakland, with the last non-stop flight showing to be operating on 5 November. It should be noted that Minneapolis-St Paul and San José del Cabo are operated on a seasonal basis.