Tchadia Airlines takes flight from Chad with an initial network of 11 routes; will increase seat capacity from Chad this winter by 56% 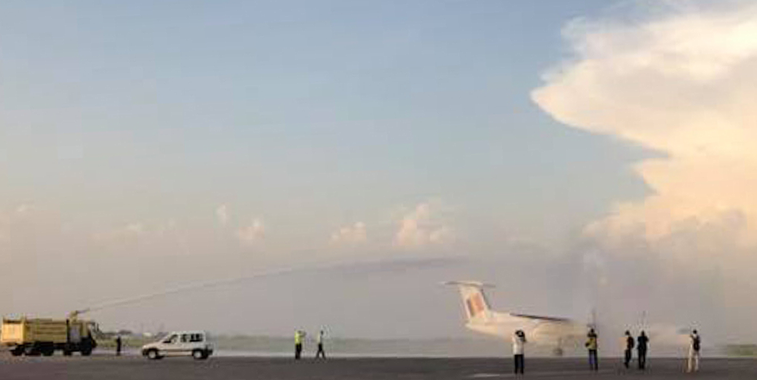 Tchadia Airlines launched on 1 October, with the carrier’s first Q400 having been welcomed to its new base at N’Djamena with a water arch salute two days previous to the airline’s first commercial flights. The carrier will operate two Q400s which have been provided by 49% owner of the company, Ethiopian Airlines. Overall Tchadia this winter will offer around 109,300 seats to/from and withing Chad, increasing the African nation’s winter commercial aviation market by 56%.

Tchadia Airlines is a new regional operator based at N’Djamena Airport in Chad, a company that is backed by fellow African operator Ethiopian Airlines. According to various sources, 51% of Tchadia is controlled by the Chad Government, while the remaining 49% is owned by the Star Alliance carrier. Tchadia will initially have two Q400s in its fleet, with these being transferred from Ethiopian Airlines. The Chad-based carrier will also use Ethiopian’s ET flight numbers on its services.

11 routes to begin with

Tchadia commenced operations on 1 October, initially with flights to Abéché, Douala, Faya-Largeau (via Abéché), Moundou (via Sarh) and Sarh from N’Djamena. In total the airline will offer nine routes non-stop from the capital of Chad, while also linking Abéché with Faya-Largeau, plus Moundou with Sarh. The latter two routes will operate as triangular services from N’Djamena four times weekly, with two flights each week in either direction. Along with these routes, the carrier will also link N’Djamena with Bangui, Kano, Khartoum and Niamey. Presently only two of the routes launched by Tchadia will face direct competition, with Tarco Air currently offering a weekly flight between N’Djamena and Khartoum, while ASKY Airlines offers four weekly flights from the Chad capital to Douala in Cameroon, while Air Cote d’Ivoire offers three weekly flights on the sector as well. Below is the carrier’s weekly schedule for w/c 16 October.

What is evident from the current operation is that there are still some gaps for potential services if needed, with afternoon slots available on Mondays and Saturdays for aircraft one, with Tuesdays and Thursdays free for aircraft two after 13:45. Based on the schedule above, aircraft one will conduct 49.8 hours of flying time, while aircraft two is poised to fly for 52.7 hours a week. The longest sector that the airline will operate is between N’Djamena and Khartoum, a route that spans 1,926 kilometres, which takes the Q400 to its maximum range potential from its home base.

Overall Tchadia will add around 109,300 seats to the Chad market this winter season, effectively increasing the size of Chad’s commercial aviation market in W18/19 by 56% versus the capacity flown in W17/18. When referencing OAG Schedules Analyser data, Chad is currently the 49th largest aviation market in Africa, accounting for just 0.2% of departing seats from the continent this year. Chad has a population of around 13.68 million people, accounting for 1.2% of Africa’s total population. 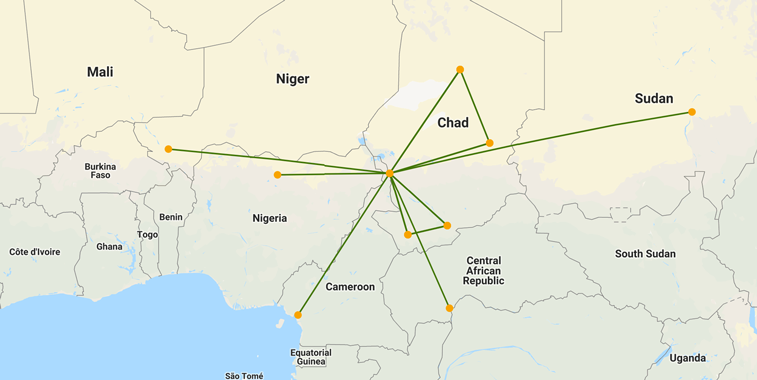 Tchadia Airlines’ initial route map consists of 11 sectors, with nine originating from the capital of Chad  – N’Djamena – to Abéché, Bangui, Douala, Faya-Largeau, Kano, Khartoum, Moundou, Niamey and Sarh. The Q400-operator will also offer domestic servcies in Chad between Abéché and Faya-Largeau plus a link between Moundou and Sarh.