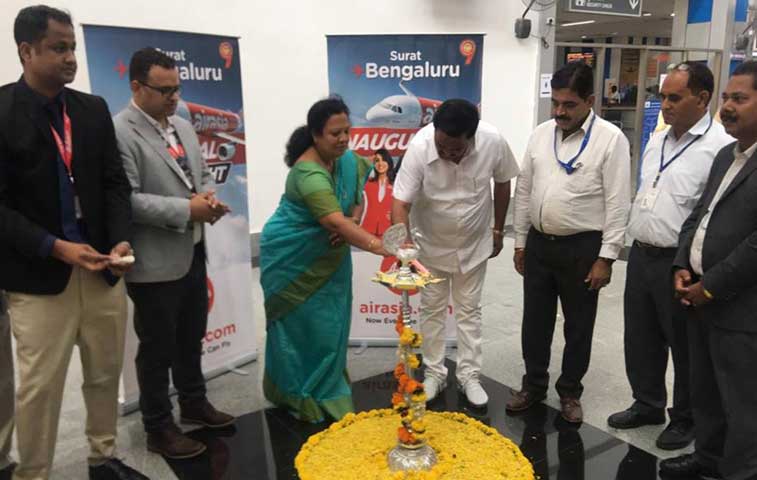 The seven largest airlines at Bengaluru, according to available capacity in S18, are all Indian-registered operators. Four of the top five are LCCs. AirAsia India became the third largest operator at Bengaluru in S18, overtaking SpiceJet in the process. The LCC has added eight new routes from its Bengaluru base since last summer including this connection to Surat which launched in June. The carrier has increased its summer seat offering from the airport by 75%.

Bengaluru Airport (Kempegowda International) claims to be the first in India to be built as a result of a public-private partnership (PPP). The Government of India signed a concession agreement with Kempegowda International Airport Bengaluru in July 2004 and the airport opened for operations in May 2008, replacing the city’s previous facility which was operated by Hindustan Aeronautics. Bengaluru was the third busiest airport in the country in FY17/18, behind Delhi and Mumbai but ahead of Chennai. It was the third busiest in terms of domestic traffic but only the fifth biggest for international passengers. anna.aero has examined Bengaluru’s network trends since the current facility opened, including its domestic and international traffic growth rates, plus the airport’s leading airlines and routes for S18.

The current Bengaluru Airport first welcomed commercial airline services in FY08/09. According to data from the Airports Authority of India, Bengaluru handled 8.76 million passengers during that 12-month period (it is unclear if this includes data for the old airport for April to May, prior to the new facility opening on 24 May 2008). Traffic has trebled since then, with 26.91 million travellers using the airport in FY17/18. Bengaluru has only witnessed one year-on-year decline in passenger numbers over the 10 financial years it has been operating, with this taking place in FY12/13 when traffic fell by 5.5%. The largest single increase occurred in FY15/16, with passengers up 23% compared to FY14/15. The airport has enjoyed particularly strong growth over the past four financial years, with an average growth rate of 23% over this period. Traffic levels have doubled at Bengaluru since FY13/14. 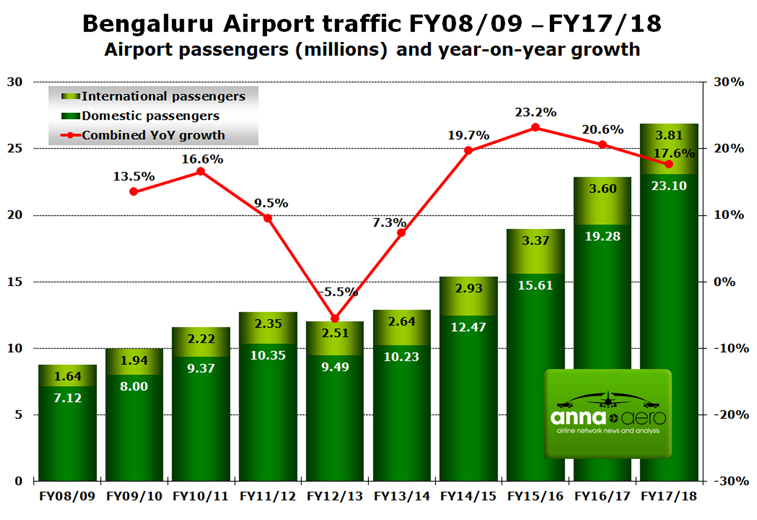 Domestic services make up most of Bengaluru’s traffic and the percentage of travellers catching internal flights has been increasing. In FY08/09, 7.12 million passengers flew on domestic links and this had grown to 23.10 million by FY17/18, representing an increase of 224%. Over the same period, international passenger numbers grew by 132% rising from 1.64 million to 3.81 million. The proportion of Bengaluru’s total traffic taking domestic flights has subsequently increased from 81% in FY08/09, to 86% in FY17/18.

According to OAG Schedules Analyser data, 34 different airlines offered at least one scheduled service from Bengaluru in S18, although some of these operations were limited or irregular. The seven biggest operators, based on available capacity this summer, are all Indian-registered carriers. The remainder of the top 12 are foreign airlines, including all three airlines of the MEB3 (Emirates, Etihad Airways and Qatar Airways). Four of Bengaluru’s 12 biggest airlines are LCC’s, while the other eight are full-service carriers.

IndiGo is Bengaluru’s biggest operator, accounting for 43% of the airport’s departing seats in S18. India’s largest airline (based on available seats) will offer scheduled services to 40 destinations during the summer season, including four international links. This includes a new route to Bangkok Suvarnabhumi, which is due to launch on 27 October. Indigo will offer 989 departures from Bengaluru during the week commencing 9 October. The largest non-native carrier at the airport is Emirates, which operates three daily flights to its Dubai hub. 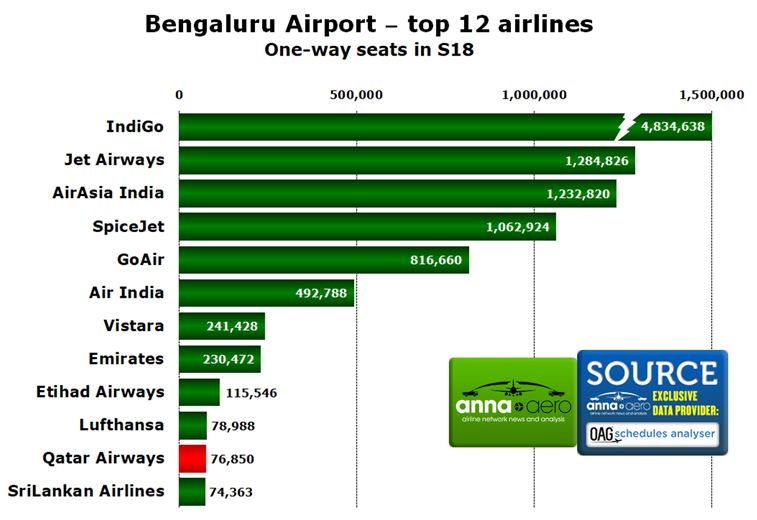 Most of Bengaluru’s top airlines increased their capacity from the Indian airport this summer when compared to S17. The biggest percentage growth came from AirAsia India, which increased its departing seats by 75% and, in the process, overtook SpiceJet to become the airport’s third largest operator. The LCC added frequencies on some existing routes, but also offered eight new destinations compared to last summer. It operates a purely domestic network from Bengaluru in S18. The only airline in the top 12 to see a decline in capacity was Qatar Airways (highlighted in red), but even then, this was an exceptionally marginal reduction of 0.2%. The MEB3 carrier offered the same frequency as in S17, indicating that the slight drop in seats was due to an aircraft change on a small number of flights.

There are scheduled seats available to 64 destinations from Bengaluru in S18, including 41 domestic connections and 23 international links. A small number of the international destinations were only served by a limited number of flights. Domestic destinations dominate Bengaluru’s departure boards, accounting for 11 of the airport’s top 12 destinations. Delhi is the busiest connection based on available capacity, accounting for 14% of all departing seats this summer. Seven different airlines will offer flights to India’s biggest hub during the week commencing 9 October, providing 282 combined departures.

Dubai is the biggest international route from Bengaluru in S18 and the 11th busiest link overall. The UAE is the biggest international country market from the Indian airport, accounting for 28% of Bengaluru’s departing seats on foreign flights. In addition to Emirates, IndiGo also offers flights to the Middle East hub. The next four biggest country destinations are all in the Asia Pacific region (Singapore, Sri Lanka, Thailand and Malaysia), while Germany is the largest European market. 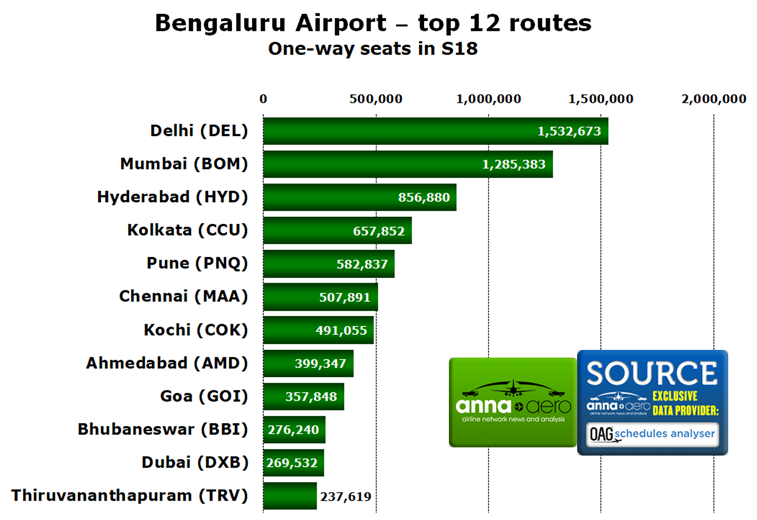 None of Bengaluru’s top 12 routes suffered capacity cuts in S18 when compared to last summer. All but one saw seat numbers increase by 5.0% or more, with only Dubai maintaining the same capacity as in S17. Bhubanesawr witnessed the largest percentage increase in available seats (up 164%) due to a significant increase in flights from both AirAsia India and IndiGo, while Air India has also introduced services on the route since last summer.

According to anna.aero’s New Routes Database, 13 new airline services have already been launched from Bengaluru in 2018 and a further four are scheduled to start before the end of the year. These include three international links, with IndiGo planning to launch Bangkok Suvarnabhumi and Kuala Lumpur on 27 October and 15 November respectively, and Air India Express due to commence operations to Singapore on 29 October. 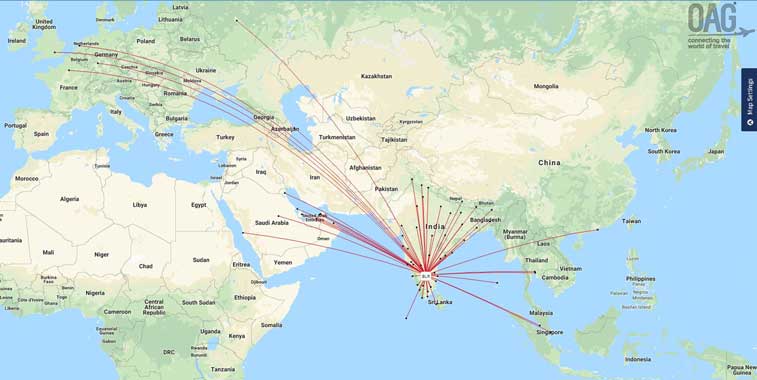 Bengaluru Airport’s route map for S18 shows the emphasis on domestic connections which account for 41 of the 64 destinations available this summer. About 86% of Bengaluru’s passengers in FY17/18 flew on domestic links. The biggest international route in S18, based on available capacity, is Dubai which is served by Emirates and IndiGo.