Wizz Air grows by 12% from Gdansk in 2018; seventh aircraft to be based from S19 with three new routes already confirmed for next year 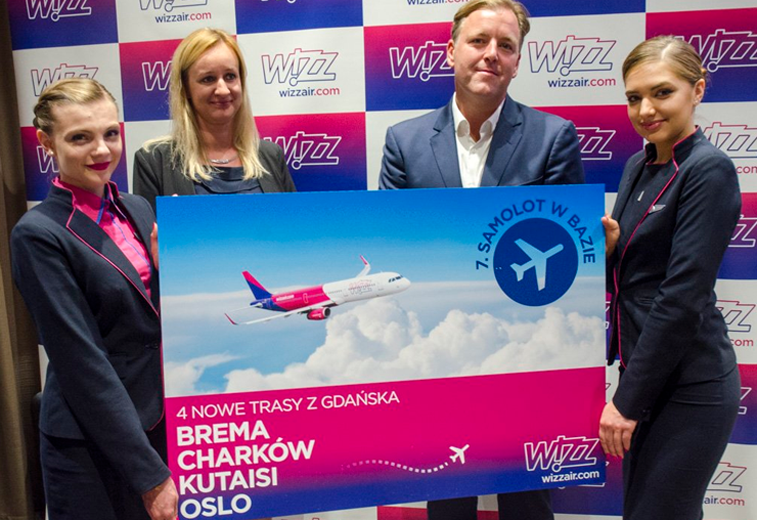 Wizz Air recently confirmed that from the start of S19 it will base a seventh aircraft at Gdansk Airport, allowing the airline to open new routes including Bremen, Kutaisi and Oslo Gardermoen. From this winter the airline will inaugurate services to Kharkiv, a route it will operate twice-weekly. Based on current schedules, WIzz Air will grow by 12% from Gdansk this year, with the airline occupying a 48% market share of all scheduled seats from the Polish airport in 2018.

Gdansk is Wizz Air’s fifth largest base, with OAG schedules indicating that the ULCC has between five and six aircraft stationed at the airport depending on the day of operation (based on schedules for w/c 9 October), made-up of two A321s and four A320s. For next summer, the airline will station a seventh unit (an A320), allowing the carrier to launch an array of new routes, with these detailed further below.

Capacity up 12% this year

In 2018 Wizz Air is set to operate 2.77 million seats from Gdansk, with this representing 48% of all seats being flown from the Polish airport the year. The carrier has doubled the size of its Gdansk base since 2011 with regards to capacity, having flown 1.39 million two-way seats that year. Overall since 2008, Wizz Air’s base has grown by 159%. 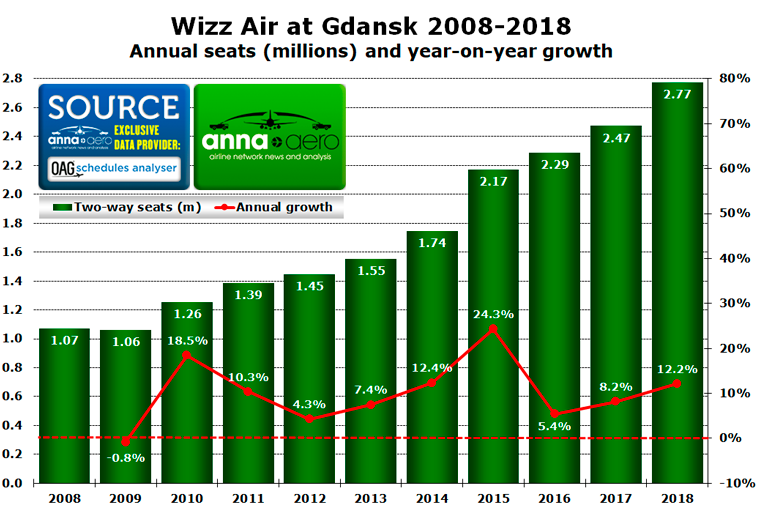 Back in S08, Wizz Air offered a network of 16 destinations from Gdansk. Rewind to S18 and this has grown to a network of 30 routes. However, of the 16 airport pairs flown in 2008, only nine are still flown in S18, namely Cologne Bonn, Doncaster Sheffield, Dortmund, London Luton, Liverpool, Malmö, Oslo Torp, Stockholm Skavsta and Turku. Some routes from 2008 have been switched to other airports in the city the carrier serves, including Gothenburg City moving to Gothenburg Landvetter, Hamburg Lubeck to Hamburg, Girona to Barcelona, and Glasgow Prestwick to Glasgow, although the latter example has now closed too. The other three routes which Wizz Air flew from Gdansk in 2008 were Bournemouth, Cork and Coventry. Other routes that the airline has flown from Gdansk during the past 10 years, but did not in S18, include Aarhus (S11), Malta (S14-S16), Rome Fiumicino (W08/09-S15) and Tampere (S10 and S11). The airline has revamped its services from Gdansk over the past 12-18 months, with the latest changes detailed below.

While flights to Kharkiv in Ukraine are poised to launch on 28 October, Wizz Air has already added new nodes to its Gdansk base in 2018. On 27 April it began a four times weekly service to Vienna, while a month earlier on 26 March it inaugurated a twice-weekly service to Lviv. Along with these new summer additions, Wizz Air added three new routes from Gdansk in W17/18, namely Tromso, Vilnius and Lisbon. However, while these five routes have all been added since last October, five routes have also been dropped from Gdansk, namely Brussels Charleroi, Frankfurt Hahn, Groningen, Glasgow and Molde. Looking ahead to this coming winter (W18/19), it appears Wizz Air will be ending its Lisbon service after just 12 months of operation, based on the airline’s booking engine. For next year the airline has already confirmed it will begin flights from Gdansk to Bremen, Kutaisi and Oslo.

Along with the new route additions for 2019, Wizz Air will also increase the frequency on four of its existing services from the airport. In S19, Aberdeen services will go from twice-weekly in S18 to three times weekly, while Lviv will go from two to four weekly, Gothenburg from four to five weekly, and Kiev Zhulyany  from twice to three times weekly. 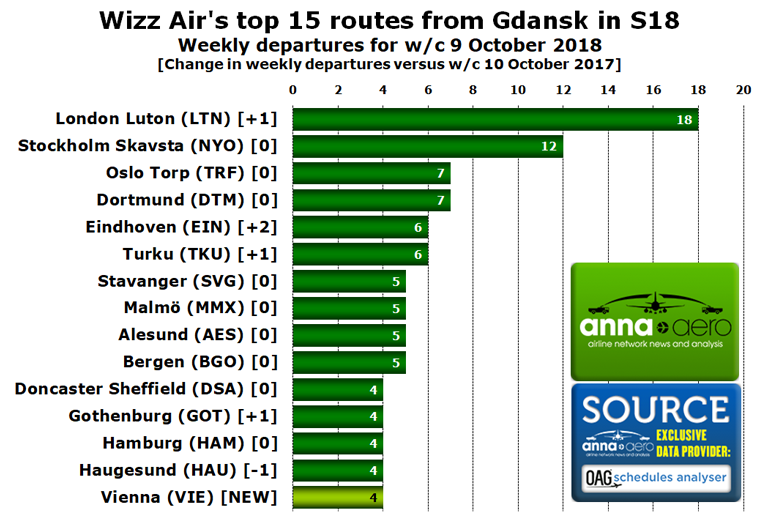 The leading connection for Wizz Air from Gdansk is from its largest base – London Luton – with an additional weekly frequency having been added since last summer. Of the airline’s top 15 routes from Gdansk, one is new, namely Vienna (highlighted in light green). Overall during the week analysed, Wizz Air is operating five more departures than it did in the same week of 2017.

When looking at Wizz Air’s network from a country market view, the top destination is Norway. This is not surprising given that seven of the airline’s top 15 routes from the airport are in the nation. In S18, of the 148 weekly departures being offered by the carrier, 26% were destined for Norway, with Wizz Air operating to eight airports in the nation from Gdansk, with this growing to nine in S19 with the addition of Oslo. Second to Norway was the UK (four airports) which accounted for 20% of departures, although over half of these were to Luton, while the third biggest country market was Sweden, accounting for 17% of rotations. 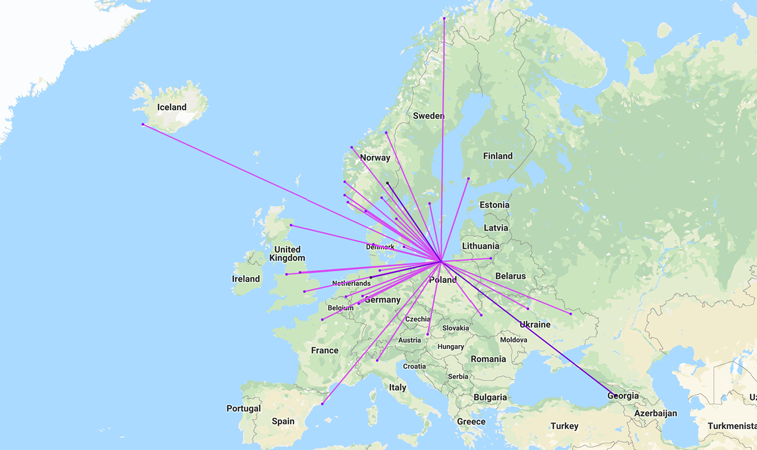 Wizz Air’s summer 2019 route map from Gdansk currently consists of 33 routes, including new services to Bremen, Kutaisi and Oslo which will launch at the beginning of the summer season (highlighted in dark purple). Another new route for next summer is Kharkiv which begins on 28 October. One route which appears not to be returning for next summer from Gdansk is Lisbon, a link that will end on 26 October.