With an average score of 27.6 out of 40 from the seven water entries that anna.aero has received in the last seven days, it has certainly been a week of par performances from the world’s firefighters. While it has been a quiet week for route launches in Europe and Asia, 21 of the 33 routes launched over the last seven days involved a US airport, with the North American region growing its market share of all Arch of Triumph entries so far in 2018 to 20%, however Europe is still way out in front on 56%. The question is though, did any of the North American airports do enough to claim victory this week? Keep Monitoring!! 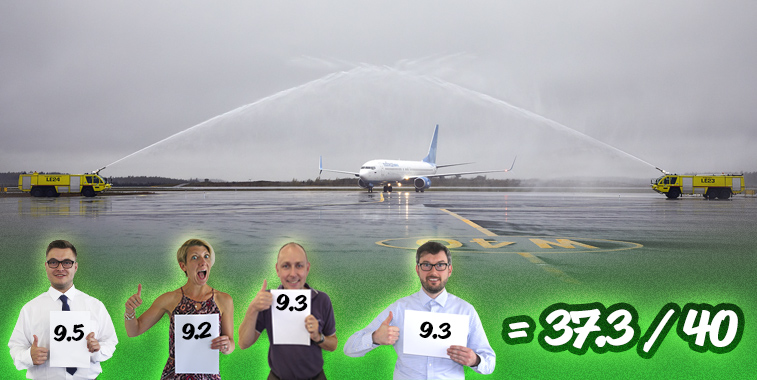 This is literally a knockout FTWA!

Judges’ comments: This superb effort from the firefighters up in Helsinki, greeting Pobeda’s first service from Moscow Vnukovo, was certainly a strong contender this week, and it’s score of 37.3 has not only claimed victory for the Finnish capital, but it has also placed it sixth on the overall leaderboard for 2018. With that, this FTWA has knocked out not just one, but three airports that were tied for tenth place, namely Salvador de Bahia, Hua Hin and the current table toppers, Lisbon! 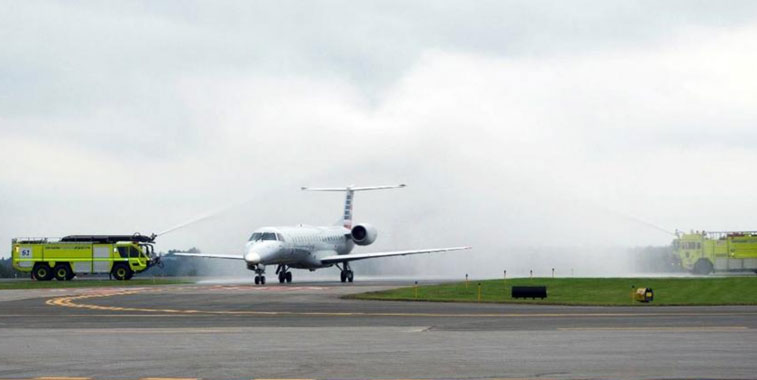 Judges’ comments: Worcestershire sauce is a fermented liquid condiment of complex mixture originally created in England by the Worcester chemists John Wheeley Lea and William Henry Perrins, and it is indeed a favourite among the anna.aero judges when it comes to beans on toast. It seems then that the Worcester Airport firefighters in Massachusetts could have done with a bit of the stuff in its tenders in order to give this FTWA attempt more of a kick! 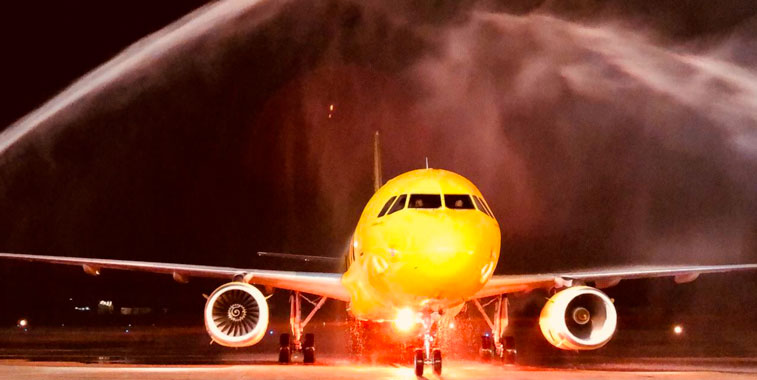 Captain: “let me just back-light the scene a bit more for the photographer.”

Judges’ comments: This is one of the brightest night shots that anna.aero has ever come across. Given that the first flight touched down in Aguadilla in Puerto Rico just after 23:00, it was always going to be a challenge for the photographer to get a great shot of the water salute. Luckily the cockpit crew left all landing lights on, and with the picture taker also managing to get the shot with the beacon flash, it has made for a well lit scene. If only the zoom was not so focused on the aircraft. 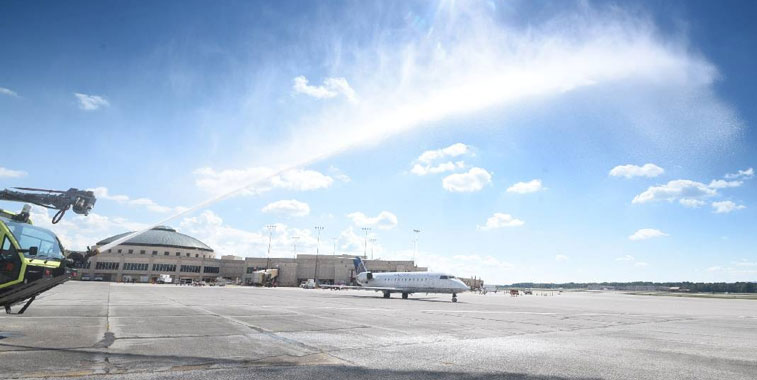 Perfect half arch…but only means half score.

Judges’ comments: This half arch that anna.aero has been sent from Chattanooga is absolutely stunning. Great light catchment from the sun, perfect angle from the tender’s front jet, ideal water pressure and a nice backdrop of the airport’s terminal. It’s just a shame that one only tender was in place. If Chattanooga had another tender (or just placed a mirror at the other end of the apron, it would have likely been 10s all round from the judges… 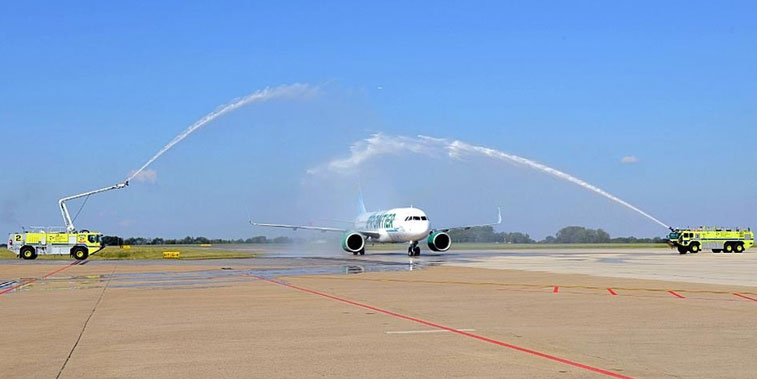 The left hand tender is aiming for the stars!

Judges’ comments: Dr. Wernher von Braun and his team of scientists transformed Huntsville in Alabama, known in the 1950s as the “Watercress Capital of the World,” into a technology centre that today is home to the second largest research park in the US and to the US Space & Rocket Center. So with the city being known for wanting to reach for the stars, it looks as though the left hand tender at the airport was trying to do the same when performing the FTWA greeting Frontier Airlines’ first flight from Denver. 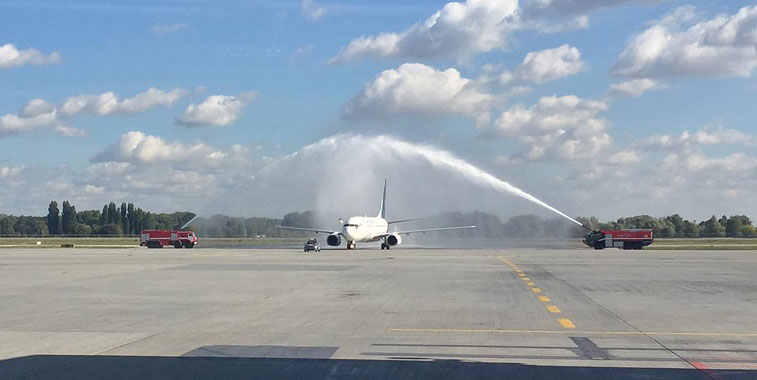 Only 0.8 points stood between second place and victory this week.

Judges’ comments: Kiev Boryspil Airport scored a very respectable 36.5 from the anna.aero judges for this arch greeting Myway Airlines’ inaugural flight from Tbilisi, which would have been enough for it to place tenth on the leaderboard this week had Pobeda not had a better water salute in Helsinki. Either way, the Ukrainian airport should be very happy with its performance. What is it they say…first is worst, second is best…third’s the one with the hairy chest! If that’s the case, San Pedro Sula best get ready for a waxing…. 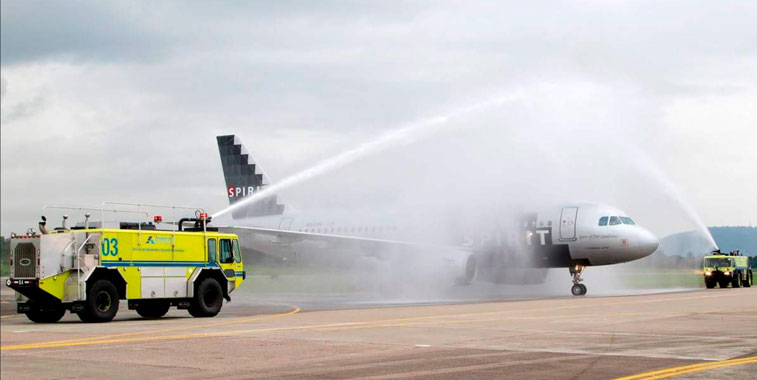 Judges’ comments: According to anna.aero’s database, this is the first ever Arch of Triumph entry that we have received from San Pedro Sula in Honduras. Scoring a very respectable 35.5, this could have well been a weekly winner, however is has to settle for third in Week 39 of the competition. If Spirit had sent one of is newer bright yellow A320neos, the aircraft could have brightened this image up a bit more to claim the weekly win!