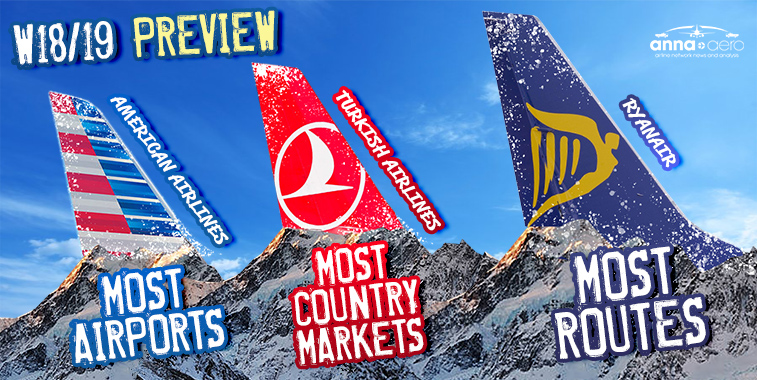 The 2018/19 winter schedule is set to kick off in less than three weeks, so anna.aero has taken an early look at airline networks for a typical week in January. The results show that Ryanair will offer the most routes with more than 1,350 on offer, Turkish Airlines will serve the most countries, and American Airlines will operate from the most airports. All three carriers maintain their leads in the same categories they topped during the equivalent week in W17/18.

Winter is approaching in the Northern Hemisphere and the W18/19 schedule will commence on Sunday 28 October and run through to Saturday 30 March next year. An early analysis of global schedule data for a typical week in January 2019 reveals that Ryanair will offer the most routes, Turkish Airlines will serve the most countries and American Airlines will operate from the most airports. All three airlines topped the charts in the same categories for a typical peak week in S18, when anna.aero previewed the summer season back in February. as well as during the equivalent January week during W17/18. This emphasises their year-round consistency as market-leaders in these respective categories. More detailed listings of the top carriers in each category can be found in the charts below.

This analysis covers global data so the Southern Hemisphere will clearly be enjoying its summer during the W18/19 schedule. The analysis does not account for all flights scheduled for the entire winter season, but is based on a typical week in January, in this case the week commencing 8 January 2019. These dates were chosen since they should include most of the flights operating during the peak European ski season, (which typically runs between December and April) and because they should not be impacted by capacity adjustments related to the Christmas and New Year holidays. Some airlines may not have filed their entire W18/19 schedules yet, but taking this week as an example should provide an accurate cross-section of what is to come, with the caveat that more routes may yet be added. The W18/19 data is compared to the week commencing 9 January 2018. The results are organised by published carrier, so some flights will be operated by partner operators or subsidiaries. It should be noted that the data only accounts for direct, non-stop services.

Ryanair will serve more routes than any other airline during the week commencing 8 January 2019. It also topped this category during the equivalent period in W17/18. The Irish ULCC has increased its winter route portfolio by 11% and will offer 360 more airport-pairs than second-placed American Airlines. Five of the 15 airlines offering the most routes this winter are based in Europe (highlighted in blue), with a further five registered in North America (highlighted in red). The remaining third (highlighted in green) include four Chinese operators and one from South America. Five of the top 15 operators offering the most routes are LCCs, with four of these being registered in Europe. Southwest Airlines was the only non-European LCC to feature in the top table. The other 10 airlines are full-service operators, with the USB3 carriers featuring prominently in the top four. The only full-service carrier to make the cut from the European region was Turkish Airlines in 11th place, although Lufthansa only narrowly misses out in 17th spot. 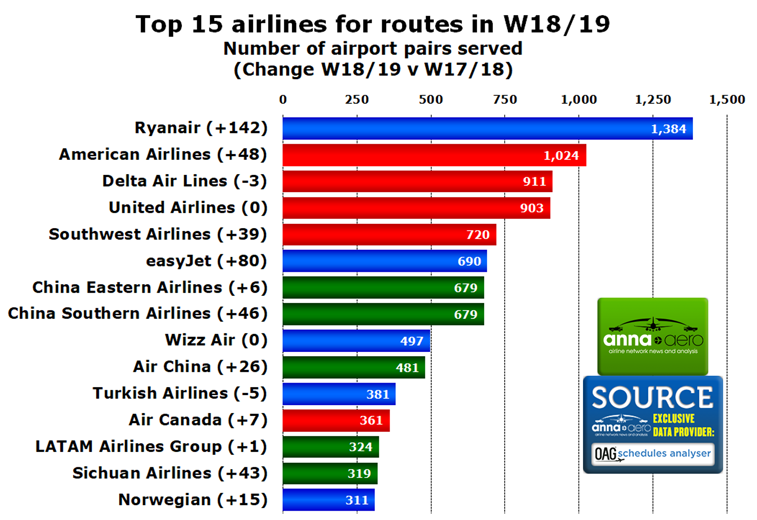 Most of the top-ranked route providers have increased the number of airport pairs in their networks for this winter, when compared to W17/18. In total, 11 of the 15 airlines have added to their networks, with Ryanair and easyJet witnessing the biggest net increases of 142 and 80 routes respectively. United Airlines and Wizz Air will both operate exactly the same number of airports pairs as last winter, while just two carriers have cut the number of links available for W18/19. Turkish airlines is scheduled to serve five fewer connections during the week under analysis, while Delta Air Lines will offer three fewer routes in its network compared to the equivalent week last winter.

Turkish delights with most country markets

Turkish Airlines once again tops the table as the airline serving the most country markets. It will fly to 30 more countries than second place Air France, maintaining the same lead it enjoyed over the French flag carrier in W17/18. Both carriers have increased their winter country counts by three. Turkish Airlines has added Gambia, Sierra Leone and Zambia to its network. The top three carriers offering the most country markets and five of the top 15, are based in Europe (highlighted in blue). The other airlines marking up the top 15 include all members of the MEB3 (highlighted in orange) and four major North American network carriers (highlighted in red). The remainder includes two African operators and Russia’s Aeroflot. Interestingly, there are no airlines from the Asia Pacific region, which includes two of the world’s fastest growing air transport markets in China and India. Although operators from both countries are increasing international links, in most cases their large domestic markets still account for the majority of available capacity. 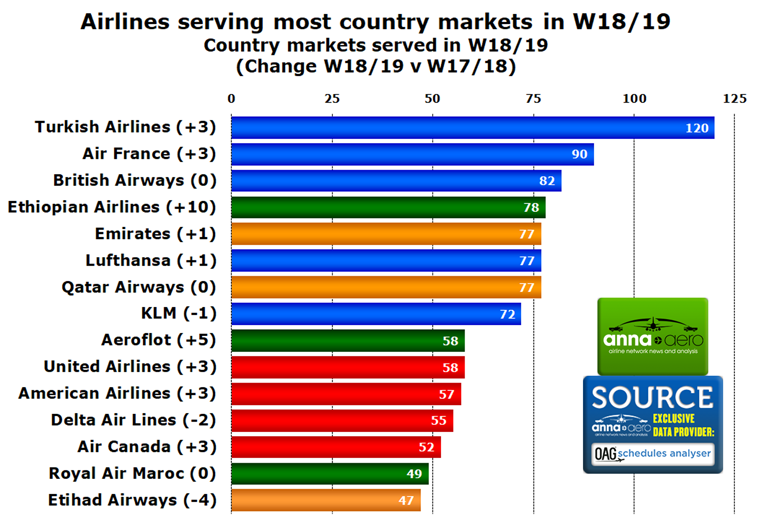 Nine of the top 15 airlines will operate to more countries in W18/19 than they did in the previous winter, according to data for the week commencing 8 January. Ethiopian airlines has added the most countries to its network since W17/18 with 10 more markets available this winter. This includes the addition of services to the Central African Republic by Tchadia Airlines, a new regional operator based at N’Djamena Airport in Chad which is 49% owned by Ethiopian Airlines and operates under the ET flight code using Q400s transferred from the Star Alliance carrier. Three of the top 15 airlines (British Airways, Qatar Airways and Royal Air Maroc) will serve the same number of country markers this winter, while three others have reduced the number of international markets in their schedules. The largest cuts have come from Etihad Airways which has reduced the number of countries served by four compared to the equivalent period last year.

The USB3 carriers sit at the top of the rankings for most airports served in a typical week during W18/19, occupying exactly the same positions they did in the equivalent period last year. A large percentage of the airports these American majors fly to are domestic facilities in the US, and some will only see flights from their regional subsidiary or partner carriers. More than two thirds of the airports served by each of the USB3 airlines are located in their home market. Delta has the biggest proportion of US airports in its schedule, with domestic facilities accounting for 70% of the nodes in its network during the week under analysis. American Airlines has extended its lead in airports served over second-placed carrier United Airlines, growing its advantage from five last winter, to eight in W18/19. The top 15 carriers include four from North America (highlighted in red), six from Europe (highlighted in blue), plus three from China, and one each from Russia and Qatar. Ryanair is the the only LCC to feature among the top-ranked carriers for airports served. 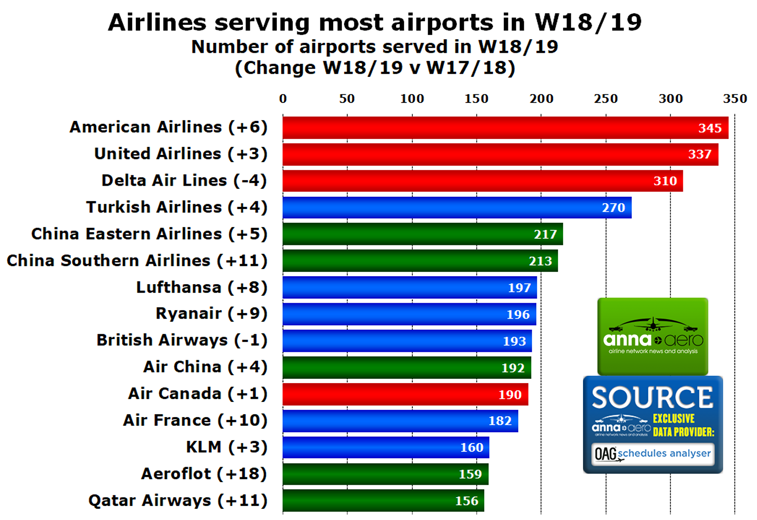 The vast majority of the top 15 airlines, based on airports served, have increased the number of destinations in their networks since last winter. In total, 13 of these operators have added more airports for W18/19. The biggest increases have come from Aeroflot (18 more airports), China Southern Airlines and Qatar Airways (both up 11). The only top-ranked carriers to reduce the number of destinations this winter are Delta (four fewer airports) and British Airways (one less).

anna.aero will keep you in touch with latest W18/19 developments including details and images from the most significant route launches and announcements as they happen. 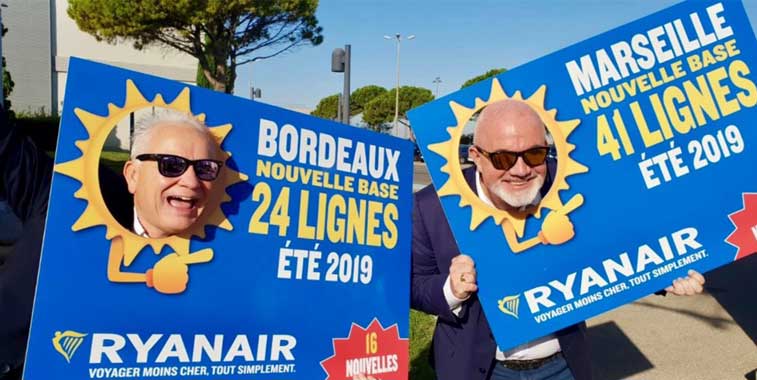 Ryanair serves more airport pairs than any other carrier from around the world in W18/19. The Irish ULCC recently announced it will open bases in Bordeaux and Marseille from S19. However, both airports will welcome new Ryanair routes this winter, including  Bordeaux to Fez, Marrakesh and Valencia plus Marseille to Bucharest and Budapest.