Vietnam’s international visitors up 23% for first nine months of 2018; commercial aviation market quadruples in size over past 10 years 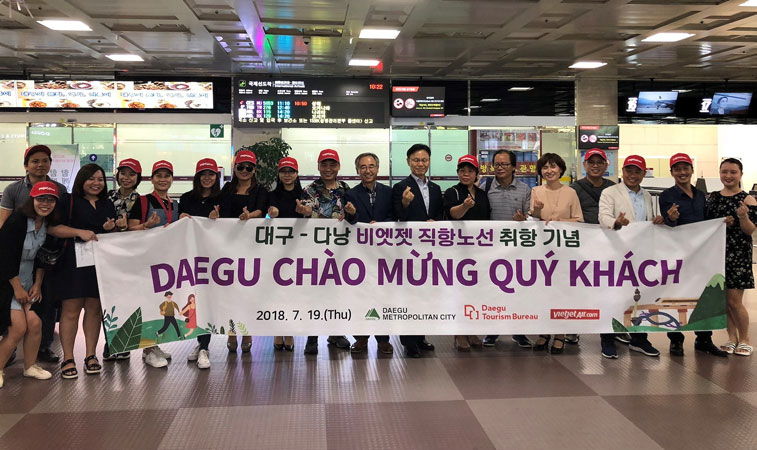 Back in July VietJetAir launched its latest route from Da Nang, a daily link to Daegu in South Korea. South Korea is the leading international market for annual departing seats in 2018, with capacity between the two countries having grown by close to 45% this year versus 2017. This is supported by the news that international visitor numbers from South Korea to Vietnam rose by 50% based on data obtained from Vietnam’s Ministry of Culture, Sports & Tourism.

Vietnam is a market which has truly tapped its potential in recent years, evident by the nation’s surging tourism industry. For the first nine months of 2018, just under 11.62 million international visitors have been to Vietnam, representing an increase of 23% versus the same nine-month period of 2017, according to data from Vietnam’s Ministry of Culture, Sports & Tourism. This level of growth that was encountered last year as well. A total of 12.92 million international guests arrived in Vietnam during 2017, up 29% versus 2016, while the latter year reported a 26% increase in international visitors when compared to the levels of 2015, growing from 7.94 million to 10.01 million in 2016. As a result of this exceptional growth, the World Travel & Tourism Council expects tourism’s total contribution to the nation’s GDP to be around $34.6 billion (9.2% contribution to GDP) in 2027, up from $18.4 billion (9.1%) in 2016. Tourism is just one factor supporting Vietnam’s growing aviation market.

OAG Schedules Analyser data states that 121.07 million seats will be flown to/from Vietnamese airports during 2018, up 9.9% versus 2017. In terms of net seats, this is a rise of 10.88 million. Of the 121.07 million two-way seats being flown from Vietnam in 2018, 65% are on domestic services (78.89 million seats), however it should be noted that these seats are technically double counted, on both departure and arrival from a Vietnamese airport. While the domestic market share is still quite high, it should be noted too that the 65% market share that has been recorded this year has fallen from a 70% share held in 2015, the highest percentage share recorded during the time analysed. 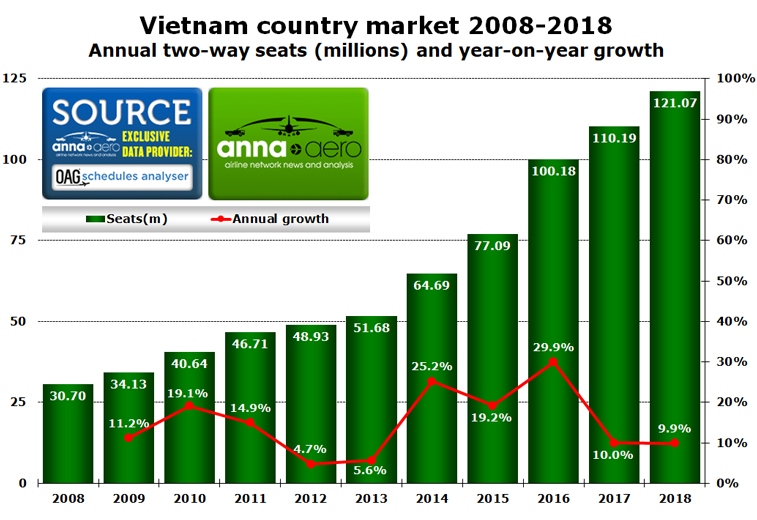 Since 2008, the Vietnamese aviation market has quadrupled, going from 30.70 million seats in 2008 to 121.07 million this year. The biggest growth has come from the LCC sector, which has increased its market share from 13% of all seats in 2008, to just under 48% this year. 10 years ago there were just 4.08 million two-way, low-cost seats flown from Vietnamese airports, with this having risen to 57.65 million this year, representing a whopping 1,312% increase in the volume of low-cost capacity. Low-cost capacity in Vietnam has grown 4.5 times faster than the overall market average, with the number of total seats in the Vietnamese market having increased by 294% between 2008 and 2018.

Ho Chi Minh City will offer 46.22 million two-way seats in 2018, up 5.8% versus 2017, further cementing itself as the leading airport in Vietnam. Second to Ho Chi Minh City is the capital, Hanoi, which will see seat capacity grow by 8.3% this year. Overall the nation’s two leading airports account for 65% of all seats this year. While this is a sizeable proportion of the overall market, it should be noted that the two airports have seen their combined market share fall from 82% in 2008. As can bee seen in the graph below, a number of airports across Vietnam are seeing the benefits of it’s booming aviation industry, with five of the 10 leading airports reporting double-digit growth in capacity for 2018. 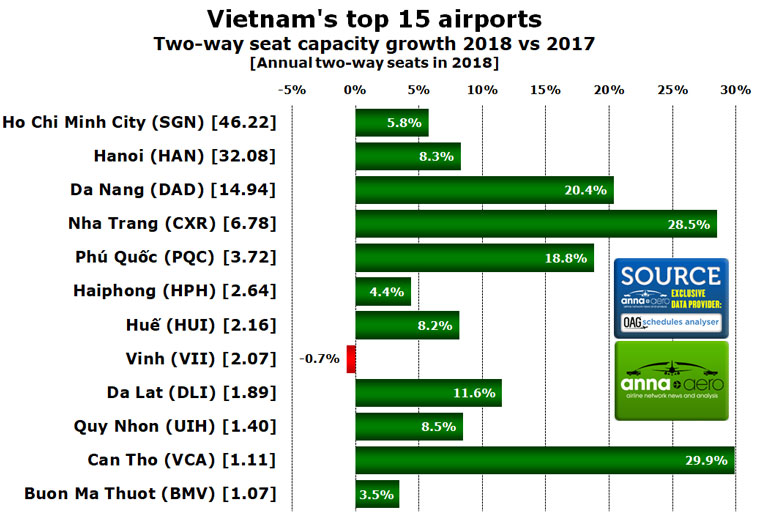 One of the airports leading the capacity growth charge is Nha Trang, with the nation’s fourth busiest airport reporting a 29% increase in capacity this year, with one of the major reasons for this growth being the popularity of the city with the Russian market. Nha Trang will see direct flights from 13 Russian airports during the w/c 9 October, with 29 weekly departures being offered. This compares to zero scheduled departures during the same week of 2017 based on OAG schedules. According to data from Khanh Hoa Province’s Department of Tourism, of the 574,164 Russian national’s to visit Vietnam in 2017, 70% went to the area around Nha Trang, with various sources reporting on Russia’s close ties with the city over the past 70+ years, both political and in the form of a navy base.

VietJetAir is creeping up on national carrier

In 2018, Vietnam Airlines is the largest airline in its home market, with it increasing its seat capacity from its native country by roughly 0.7% this year when compared to 2017. However, the nation’s biggest LCC – VietJetAir – continues to expand at a blistering rate, with it having increased its seat capacity by 22% this year. While Vietnam Airlines’ capacity this year is still 25% greater than VietJetAir’s, it should be noted that in 2017 the national carrier’s capacity was 52% greater than the LCC’s, highlighting the speed at which the the nation’s second biggest airline is growing. Overall these two carriers, along with third placed Jetstar Pacific Airlines, command 79% of all seats from Vietnam in 2018. 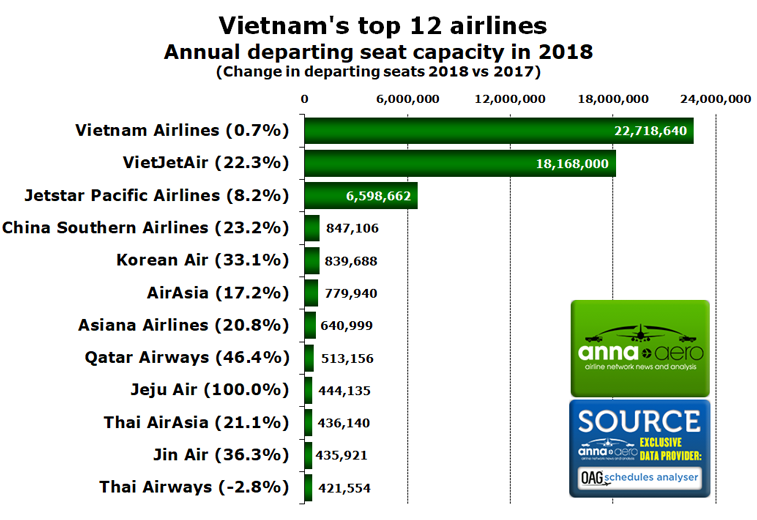 The biggest growth from the nation’s leading airlines was reported by South Korean LCC Jeju Air, which increased its seat offering to Vietnam this year by 100%. It has opened two new routes from its home market to Da Nang this year, launching services from Busan in March and from Muan in May. The airline has also increased the weekly frequency on its services from Seoul Incheon to Da Nang and Hanoi, while in late December it launched flights from the South Korean capital airport to Ho Chi Minh City and Nha Trang, routes that were inaugurated with a daily frequency.

International seat capacity from Vietnam will grow by 17% in 2018, with all leading markets showing very healthy growth. The biggest international market from Vietnam is South Korea, with seat capacity between the two nations increasing by close to 45% in 2018. While this is a sizeable jump, it should be noted that during the first nine months of this year, international visitor numbers from South Korea to Vietnam rose by 50% based on data obtained from Vietnam’s Ministry of Culture, Sports & Tourism. While no brand new routes were opened between the two countries, new carriers have entered existing markets. The biggest expansion between the two nations has come on the route between Da Nang and Busan. Asiana and Jeju Air both launched daily flights between the two airports on 25 March 2018, and due to their arrival on the city pair, capacity on the route has grown by 86%. 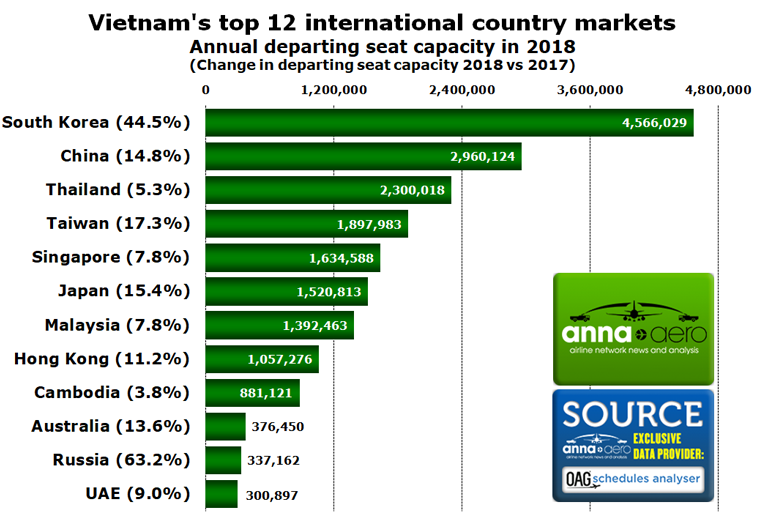 When referencing Vietnam’s Ministry of Culture, Sports & Tourism, the sixth largest market for international visitors is a nation which has no direct route to Vietnam, the US. According to the ministry, 614,117 US visitors arrived in Vietnam during 2017, up 11% versus 2010. Based on data from OAG Traffic Analyser data, 1.33 million people travelled indirectly between the US and Vietnam in 2017, with 19% of these passengers travelling between Ho Chi Minh City and Los Angeles, the leading unserved city pairing between the two markets. With Vietnam Airlines having informed anna.aero last year that it was looking at the possibility of flights to the US West Coast from 2019, could this be their first route? Be sure to check anna.aero to find out. Following the US, the next leading country market for visitors without a direct flight to Vietnam, is Canada (16th; 138,242 visitors in 2017; up 13% over 2016) followed by the Netherlands (19th; 72,277 visitors in 2017, up 12% versus 2016). 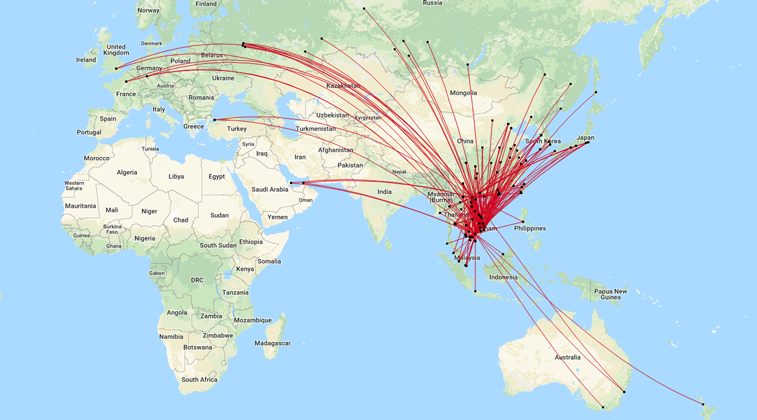