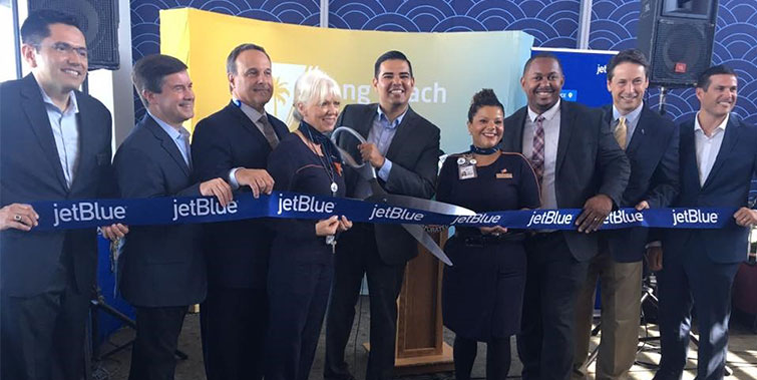 JetBlue Airways launched flights between Long Beach and Reno-Tahoe in 2016, while the carrier added Fort Lauderdale services last year. In December the airline will add seasonal routes to Bozeman in Montana and Hayden/Steamboat Springs in Colorado. While these routes are being added, the carrier is cutting its Long Beach winter capacity by over 30%, with this coming on the back of a year (2017) where it flew 2.90 million passengers, a record for the past decade.

Long Beach is JetBlue Airways’ leading airport on the US West Coast with regards to annual seat capacity, and overall it is the fifth largest base for the airline after New York JFK, Boston, Fort Lauderdale and Orlando. OAG Schedules Analyser data suggests that the airline has between four and five night-stopping aircraft at the LA airport, while a few of the aircraft that operate Long Beach services also night-stop at other airports, with 9 October showing that an aircraft night-stops at both Seattle-Tacoma and Portland.

Traffic surge in 2017 comes at a price

Last year JetBlue grew seat capacity from Long Beach by a solid 47%, and the investment resulted in a 33% increase in traffic, hitting a high of 2.90 million passengers. However the sudden surge did dampen the overall performances for the carrier, with its average theoretical Long Beach load factor going from 84% in 2016 (the highest during the 10-year period analysed) to below 76% last year (the worst recorded during the same period). As a result of this reduction in filled capacity, it is not surprising that the airline has decided to scale back the number of flights it operates from Long Beach, with OAG schedules indicating that, this winter, JetBlue’s seat capacity from Long Beach will reduce by 34%. 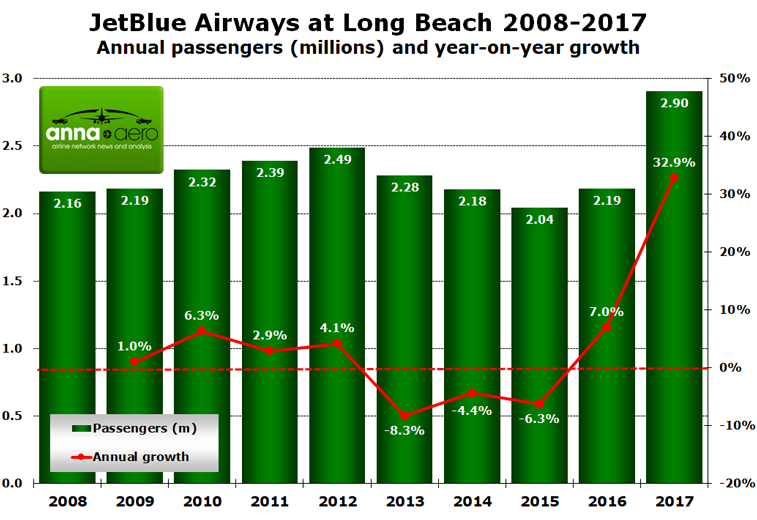 “The majority of the change in Long Beach is being driven by the rejection of the customs facility,” said Marty St. George, JetBlue’s EVP Commercial and Planning Operations, back in April, with the airline wanting to establish international links from the airport to destinations in Mexico. Because of the airline’s tiff with Long Beach Airport, it has decided to increase its flying operation from Burbank Airport in LA by 189% this winter, albeit with this being from a low base of 22,000 one-way seats in W17/19 to 63,700 in W18/19. Ontario Airport is also an addition to the winter schedule, with the airline having launched services from JFK back in September. The airline will also increase its Los Angeles LAX flying programme by 7.2% this winter, with over 429,500 one-way seats being operated between 28 October and 30 March.

As a result of JetBlue’s decision to cut capacity from Long Beach, the number of weekly flights it is offering from the airport has been impacted in a big way. An analysis of schedules data shows that for the w/c 9 October, the airline will be offering 88 fewer departures than it did during the same week of the previous year, a 34% drop in weekly movements. The two routes which have taken the greatest impact are Las Vegas and San Francisco, with both seeing at least three daily services being cut, while Oakland and San Jose have seen two daily services chopped. 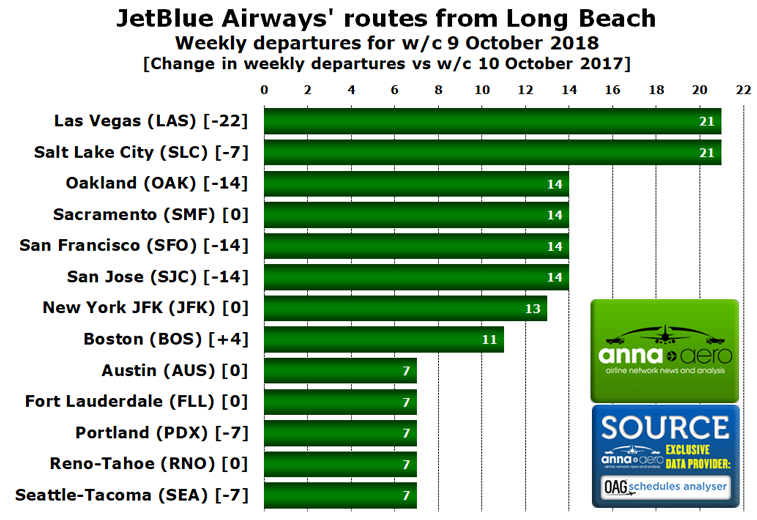 Along with the routes which are seeing at least two daily rotations canned, a further three services are seeing a daily rotation being pulled. Salt Lake City has gone from four to three times daily, while Portland and Seattle-Tacoma have gone from a twice-daily to a single daily departure. While seven of JetBlue’s routes from Long Beach have seen heavy cuts, one service has encountered different fortunes, with Boston growing from daily to an 11 times weekly service.

While no routes have been dropped by JetBlue from Long Beach, it should be noted that a number of routes have been cut from the network during the past 10 years. Chicago O’Hare and Washington Dulles were both served in 2008, but both routes ended in June 2012. JetBlue also operated a summer seasonal service to Anchorage in Alaska between S11 and S16. During the past 10 years the route to Fort Lauderdale has also been cut and then returned, having been suspended between 2011 and 2017.

As a result of JetBlue’s decision to scale back at Long Beach, the airport’s second biggest carrier, Southwest Airlines, has picked up some of the slack. Currently the LCC competes with JetBlue directly on three routes, namely Las Vegas, Oakland and Sacramento, while Southwest also flies to Denver. During the week analysed (w/c 9 October), Southwest will offer 25 more weekly departures when compared to the same week of 2018, an increase of 54%. The biggest increase will come on its route to Las Vegas, which is growing from four times weekly to a 19 times weekly frequency, representing a 375% increase in the number of flights. This commitment by Southwest means that overall this winter, there will only be seven less rotations per week between Long Beach and the Nevadan city.

Along with Las Vegas, Southwest will also increase its Sacramento service from twice-daily to 24 times weekly, a 71% increase in weekly flights and intensifying the battle with JetBlue, which will not cut services to Sacramento versus last winter. Southwest’s Oakland (26 times weekly) and Denver (twice-weekly) services remain at the same frequency as last winter. Southwest launched operations to Long Beach in June 2016, and last year it carried 436,000 passengers from the airport, while for the first six months of 2018, it transported 262,600 people, an increase of 34% over the same period of last year. 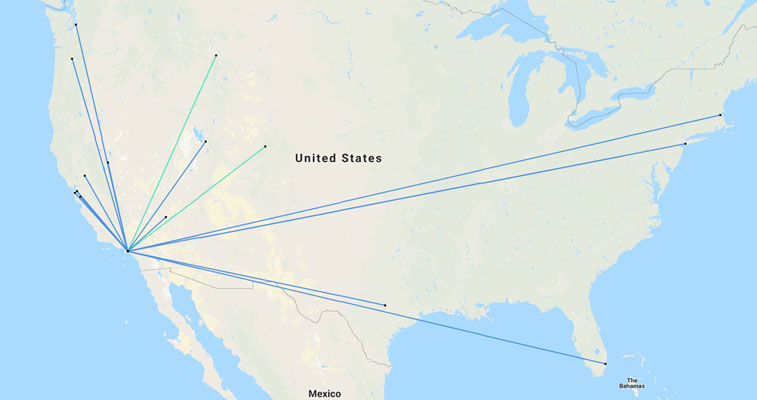 JetBlue Airways’ Long Beach route map presently consists of 13 destinations, consisting mainly of links to key US West Coast airports and the airline’s leading bases on the East Coast. From December, routes 14 and 15 are poised to be launched, namely Bozeman in Montana and Hayden/Steamboat Springs in Colorado (both highlighted in light blue).