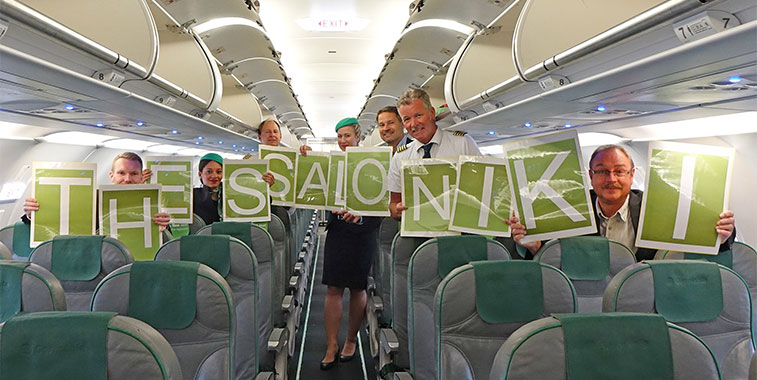 Münster/Osnabrück welcomed 963,000 passengers in 2017, representing an impressive 23% increase on the previous year. One of the main contributors to this growth has been Germania, which is now the second largest carrier at the airport. The German leisure airline opened this new route to Thessaloniki on 22 June.

Münster/Osnabrück Airport borders the regions of North Rhine Westphalia and Lower Saxony in Northern Germany and is close to the border with the Netherlands. It has a one-hour drive time catchment population of approximately 3.12 million people, including residents living in the eastern region of the Netherlands. The local area features both manufacturing and service industries, as well as one of the largest universities in Germany, namely the University of Münster. anna.aero has examined the airport’s fortunes going back to 2008 to see how traffic trends have developed during the past decade.

Münster/Osnabrück handled around 1.57 million passengers in 2008 but, as with many airports around the world, traffic levels dropped as the global economic downturn took hold. The airport witnessed five consecutive years of declining traffic from 2008 onward, with passenger numbers dropping to about 850,000 in 2013. During this five-year period, the largest net contributor to the reduction in capacity was the airport’s then largest operator, airberlin, which cut its number of departing seats from more than 600,000 in 2008 to 164,000 in 2013. The German carrier cut all flights from Münster/Osnabrück in 2016 before ceasing operations entirely the following year.

Recent figures are far more positive and paint the picture of an airport on the up. In 2017 Münster/Osnabrück enjoyed an impressive 23% increase in traffic compared to 2016 figures, handling 963,000 passengers in the process. It claims to have been the fastest growing airport in Germany last year (based on percentage growth). The strong increase in traffic in 2017 was largely the result of an 86% increase in departing capacity by Germania, along with the introduction of services by NIKI and Eurowings. According to Münster/Osnabrück, passenger numbers for January to September 2018 are up 4.8% compared to the equivalent period last year. The airport expects overall growth of around 5.0% this year and expects to welcome about 1.01 million passengers during 2018. 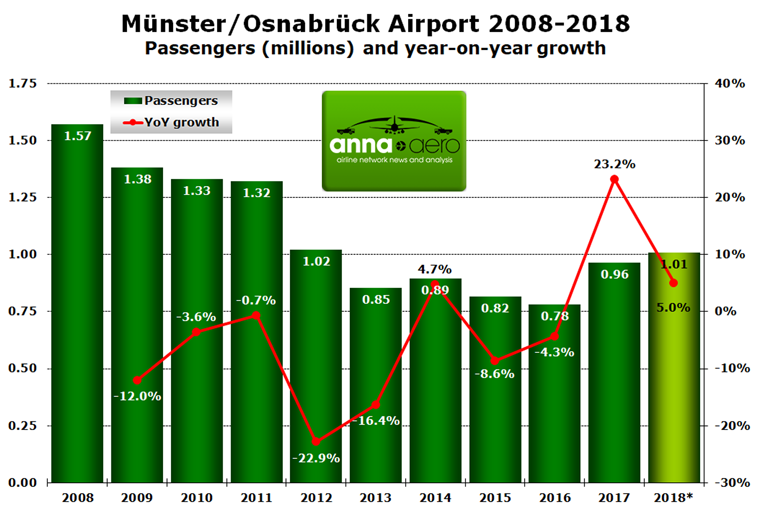 Lufthansa leads but Germania is gaining

According to OAG data, 10 airlines will offer some form of scheduled service from Münster/Osnabrück over the course of 2018. Four of these are German-registered carriers. The airport’s five biggest airlines, based on departing seats (Lufthansa, Germania, SunExpress, Eurowings and Laudamotion) will account for 96% of its total capacity in 2018. Lufthansa is the largest operator and offers flights to its two hubs at Frankfurt and Munich. The German flag carrier will account for 44% of Münster/Osnabrück’s departing seats this year. Germania is the second largest carrier at the airport and will offer scheduled flights to 19 international destinations over the course of 2018. This includes three new services that are due to launch during W18/19 (mentioned below). The largest non-native operator is SunExpress, which offers flights to four destinations in Turkey. 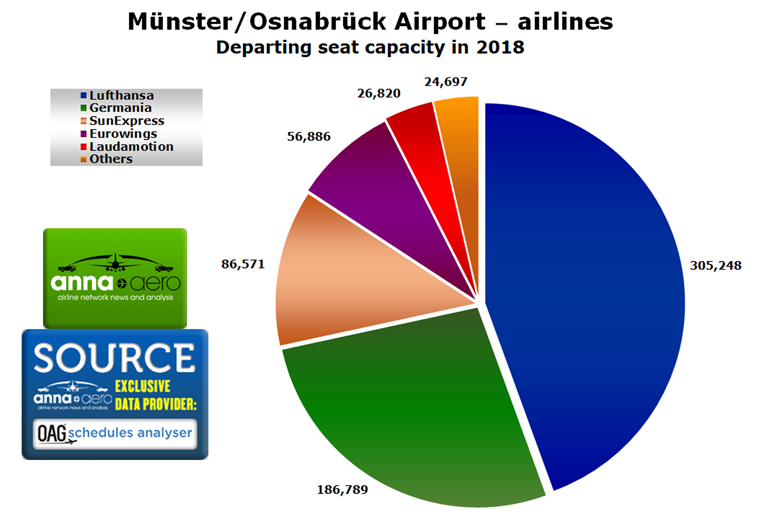 Most of Münster/Osnabrück’s airlines have increased capacity in 2018, compared to the previous year. Eurowings almost doubled the number of seats available, increasing capacity by 97%, having begun scheduled services from the airport in April 2017. SunExpress also grew its seat numbers by 64% this year. Germania further increased its seat offering by 8.3% and has expanded rapidly at Münster/Osnabrück. It now accounts for 27% of the airport’s departing annual seats. New carriers for 2018 include SundAir and Laudamotion, although the latter has obviously picked up some of the capacity lost when NIKI ceased operating.

Up to 27 destinations will be offered from Münster/Osnabrück over the course of 2018, including regular charter flights. This includes three domestic and 24 international connections. Two of the three largest scheduled links are domestic connections to Lufthansa’s major hubs at Munich and Frankfurt. The flag carrier will offer 34 departures to Munich and 28 to Frankfurt during the week commencing 16 October.  According to data from OAG Traffic Analyser for 2017, the number one destination for connecting traffic from Münster/Osnabrück via Munich was Vienna (8,240 two-way passengers in 2017), while the Austrian capital is also the third most popular connection via Frankfurt (5,170 two-way passengers in 2017). Since Vienna is not currently served by a direct service, this link might be one for airlines to look at in the future. Berlin Tegel was the top onward destination for those travellers choosing to transfer via Frankfurt (7,570 two-way passengers in 2017), suggesting there is also some demand for a German capital connection.

The largest international destinations, based on available capacity in 2018, are Palma de Mallorca and Antalya. The Spanish Island link will be served by five different carriers over the course of the year, with Eurowings and Germania offering the most seats. The Turkish connection is flown by three carriers, with SunExpress operating the most capacity.

Eight international country markets will see scheduled flights from Münster/Osnabrück in 2018. The largest of these are Spain and Turkey, which between them account for 84% of the airport’s international capacity this year. Scheduled flights are available to six destinations in each country in 2018. About 20% of the airport’s total scheduled seats are offered on Turkish links, which it claims is above average for a German airport. The fastest growing international market from Münster/Osnabrück is Egypt, with a large increase in available seats on flights to Hurghada taking place in 2018. 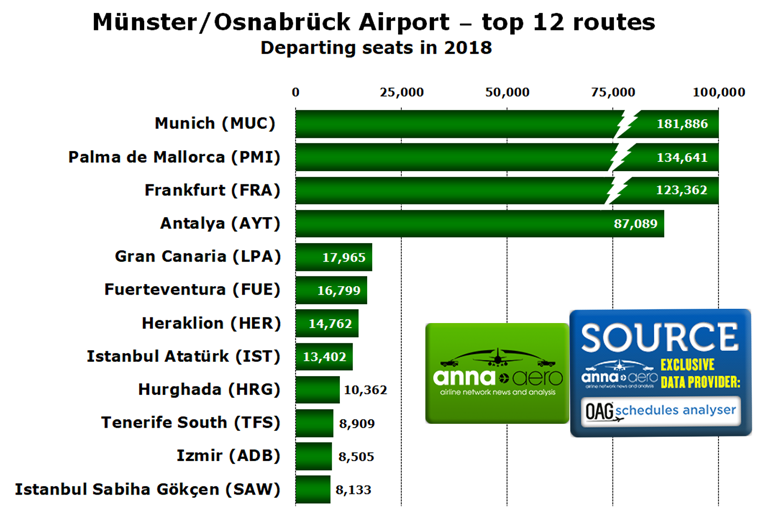 Most of the top 12 routes from Münster/Osnabrück have experienced an increase in seat numbers for 2018, compared to last year. Hurghada saw the biggest percentage growth (678%) due to extra capacity from Germania and the introduction of services by Small Planet Airlines. Hurghada is also served by FlyEgypt during the winter season, on behalf of a tour operator. The next largest percentage increases came on services to Izmir and Antalya, which both benefited from capacity growth from SunExpress.

According to anna.aero’s New Routes Database, four new services have already been launched from Münster/Osnabrück in 2018 including a new destination in Thessaloniki, which was launched by Germania.  A new charter service was also introduced to Bodrum by Tailwind Airlines. Three more services will be launched by Germania during W18/19 in the form of Agadir, Salzburg and Funchal. The German leisure operator has also announced its intention to add services to Larnaca, Ibiza and Zonguldak in Turkey during S19. The carrier plans to add a third aircraft to its Münster/Osnabrück base for next summer.

The German airport has clear ambitions for future growth. “Our aim is to add further destinations to our network with new and existing airlines,” explains Andrés Heinemann, VP Marketing and Communication, Münster/Osnabrück Airport. “City destinations are a main focus with key targets including Vienna, Berlin, London, Barcelona and Athens.” Mathias Richter, Manager Aviation Marketing, Münster/Osnabrück Airport adds: “We see further demand to expand our leisure portfolio with destinations in Italy and Croatia and would also like to launch more links to Central and Eastern Europe, plus an additional hub connection.” 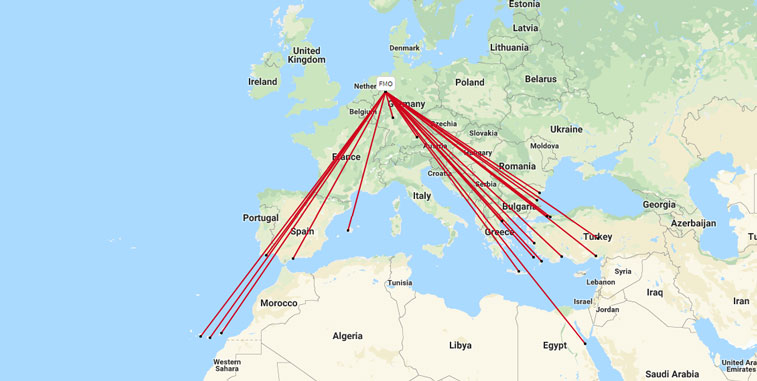