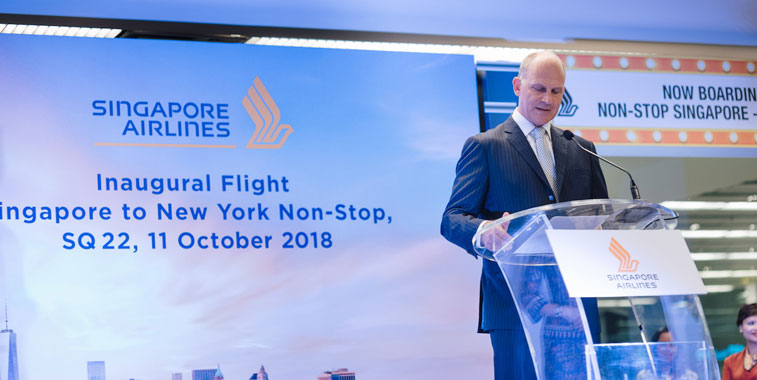 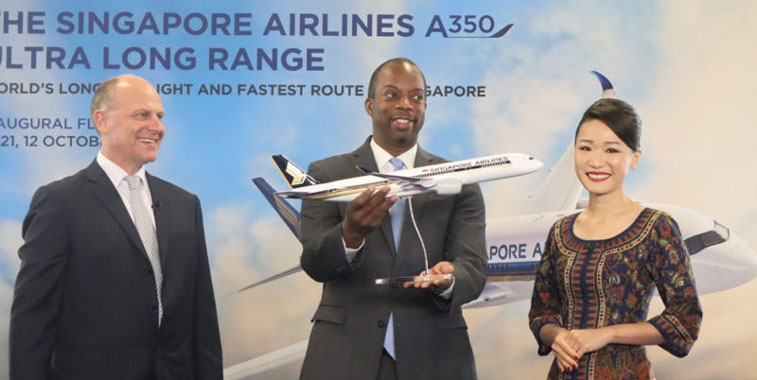 At the latter end of the route in New York, a gift giving exchange took place between Campbell Wilson, SVP Marketing & Sales, Singapore Airlines and Huntley Lawrence, Aviation Director, Port Authority of New York and New Jersey, with the airline presenting the airport authority with a model A350-900. Photo credit: Sam Chui. 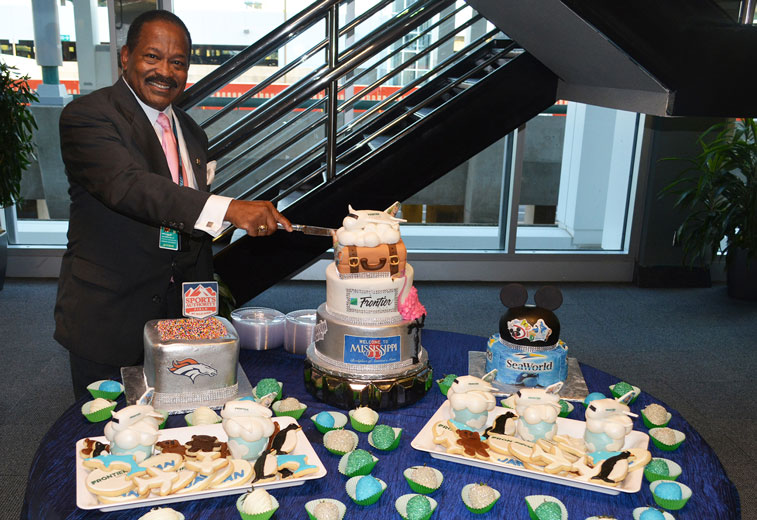 Frontier Airlines launched flights to Jackson in Mississippi from Denver on 13 October, with the airline also poised to begin operations to the latter airport from Orlando on 22 October. To celebrate the occasion of the ULCC’s arrival, Jackson commissioned three brilliant cakes, with one depicting the Mile High Stadium in Denver, while another showcased the many attractions of Orlando. Finally a central three-tier cake was the main event showstopper. The lower tier was dedicated to Mississippi, the middle tier Frontier Airlines, and the top a suitcase encouraging passengers to take advantage of the airline’s ultra-low fares. Cutting the cake is Commissioner Lee A. Bernard Jr,  Vice Chairman of Jackson Airport’s Board of Commissioners. Frontier Airlines will operate both routes twice-weekly using its fleet of A320s. 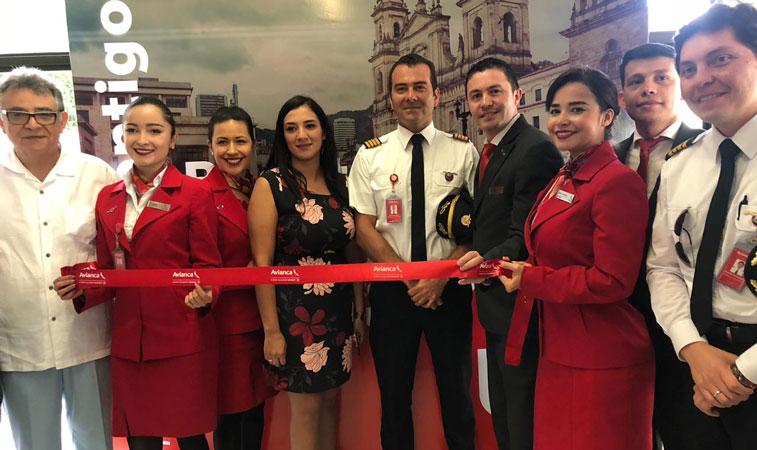 Avianca commenced operations on a new Colombian domestic route between Bogota and Corozal on 12 October, with the later airport holding a ribbon cutting ceremony to mark the opening of the new connection from the nation’s capital. The Star Alliance member will use its fleet of A318s on the route, facing competition from SATENA. 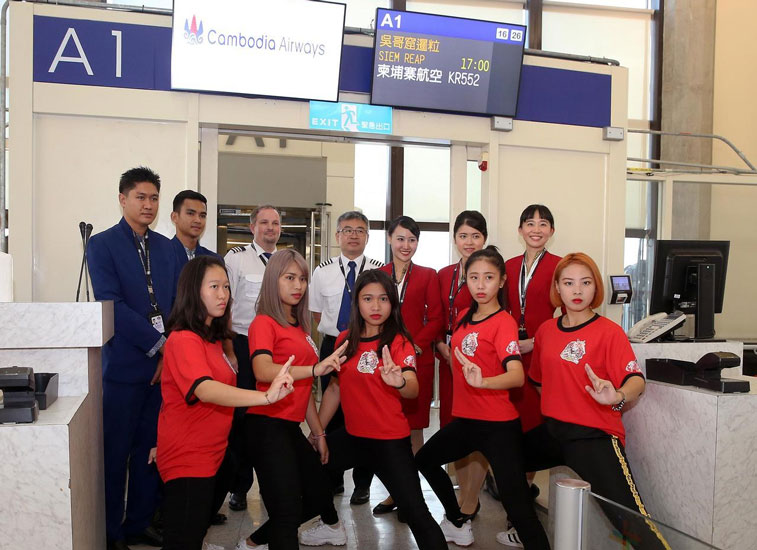 Cambodia Airways launched operations between Siem Reap and Taipei Taoyuan on 9 October, with the latter airport having a small gate ceremony to mark the start of the airline’s operation on the Asian city pair. The carrier will offer a twice-weekly (Tuesdays and Fridays) service on the 2,235-kilometre route using its fleet of A319s. 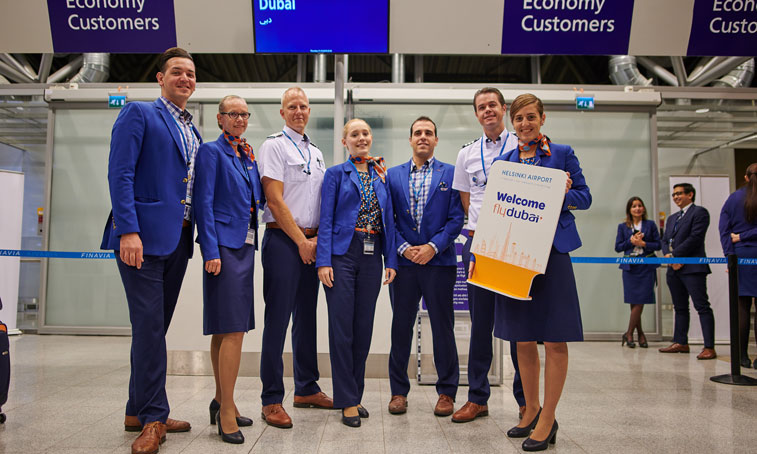 flydubai commenced flights to its latest European destination on 11 October, beginning a daily service between Dubai and Helsinki. The carrier will operate the 4,535-kilometre route using its 737 MAX 8s. 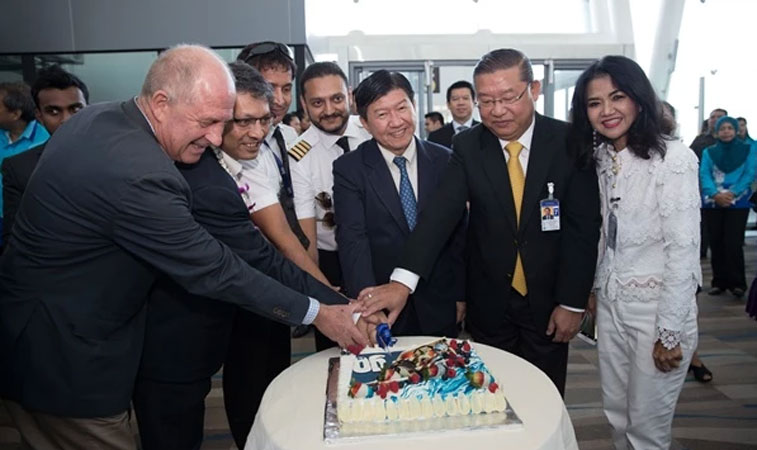 GoAir launched its first international route on 11 October, with the Indian LCC commencing operations between Delhi and Phuket. The latter airport celebrated the arrival of its newest carrier with a cake cutting ceremony. Along with launching Delhi flights, Phuket Airport also welcomed GoAir’s first flight from Mumbai the following day. 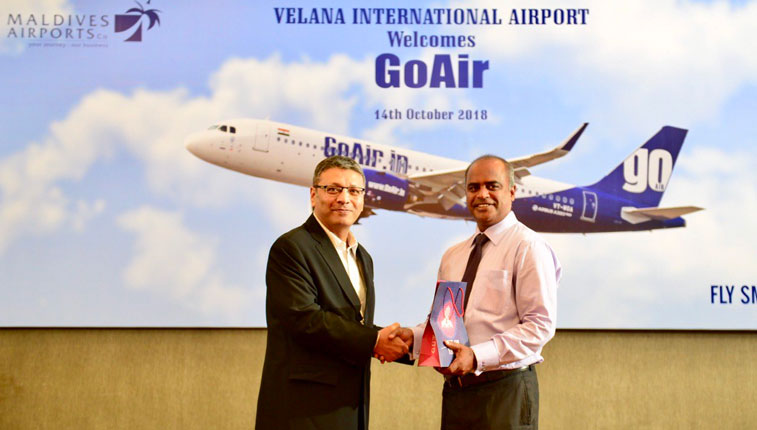 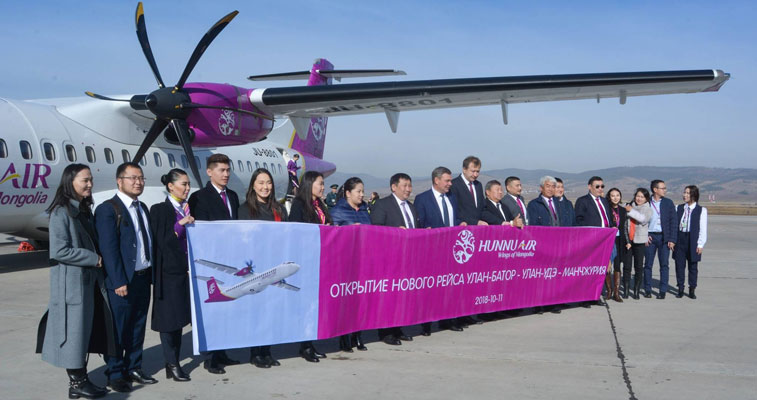 Hunnu Air launched operations between Ulan-Ude in Russia and Manzhouli in China on 11 October, a route that originates from the carrier’s home base of Ulaanbaatar. The Mongolian carrier will connect the Russian and Chinese cities twice-weekly (Thursdays and Sundays) using its fleet of 72-seat ATR 72-500s, of which it currently has two. 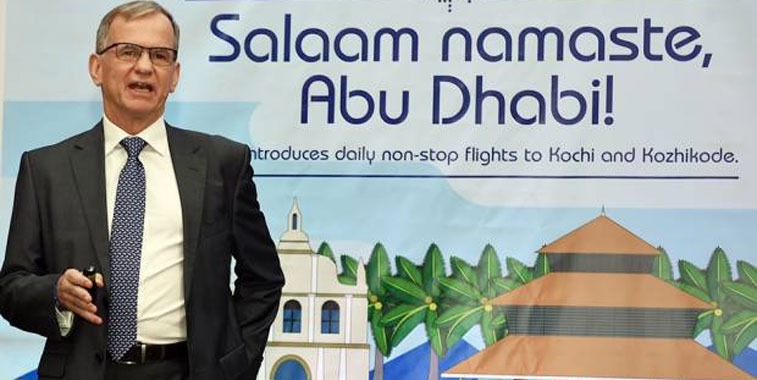 Seen speaking at the launch press event covering IndiGo’s first flights to Abu Dhabi is William Boulter, CCO of IndiGo. On 15 October the carrier launched daily flights to the UAE airport from Kochi, a route flown using A320s. The airline will also add flights to Abu Dhabi from Kozhikode from 16 October, a route also flown daily. 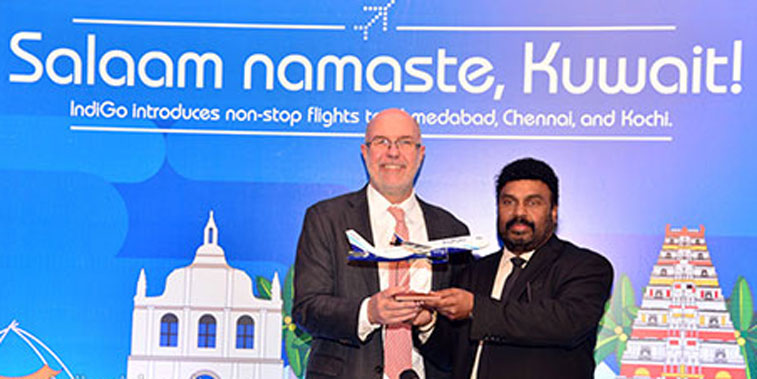 Anoth press conference was held by IndiGo to promote its new services to Kuwait City. The airline launched daily flights from Chennai on 15 October, while routes from Ahmedabad and Kochi will begin in November. Pictured at the launch event for the flights are Michael Swiatek, Chief Planning Officer, IndiGo, and P.N.J. Kumar, CEO, Caesars Travel Group. IndiGo will face direct competition from Kuwait Airways on the 3,776-kilometre route from Chennai. 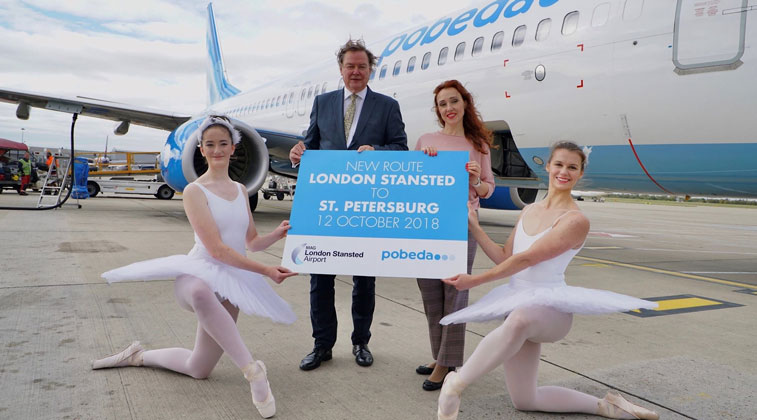 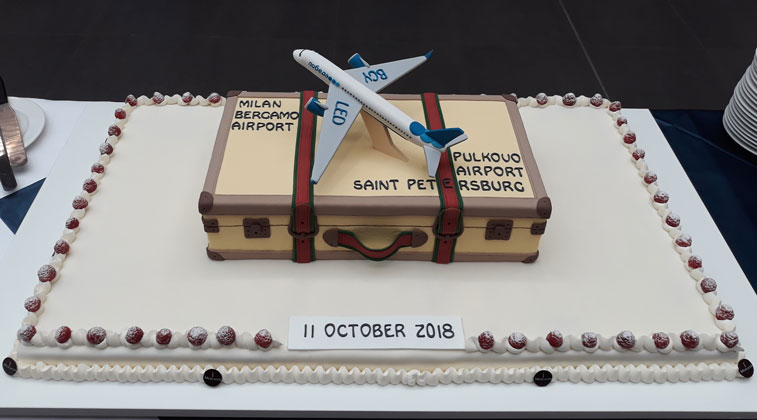 Milan Bergamo celebrated the start of Pobeda’s first flight from St. Petersburg with this impressive suitcase-themed cake, with this being the airline’s second route to the Italian airport after Moscow Vnukovo. Pobeda will offer three weekly flights between St. Petersburg and Bergamo, with the route adding an extra 27,000 seats to the Italian airport’s winter schedule. The carrier is also increasing the number of flights between Moscow and Bergamo in W18/19. 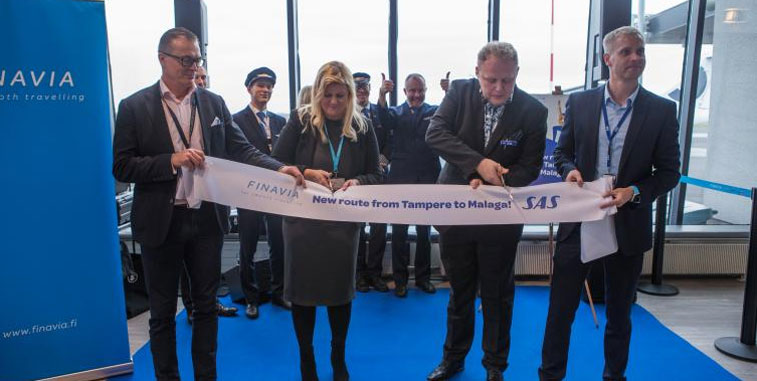 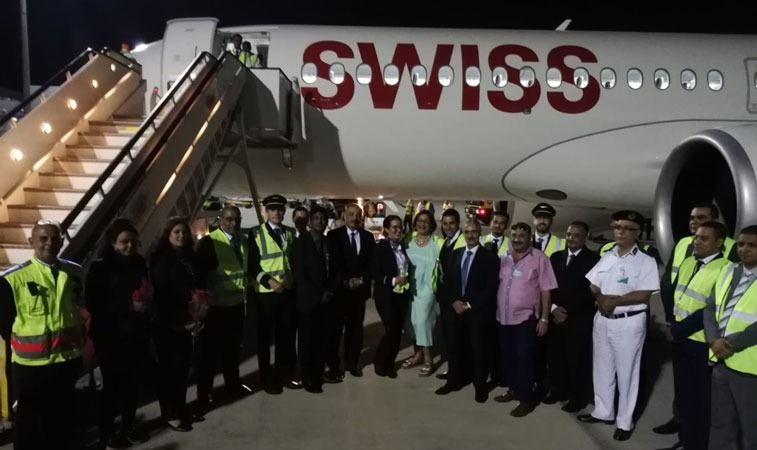 SWISS commenced operations on a weekly (Saturdays) service between Geneva and Hurghada on 13 October, with a welcoming ceremony made-up of various airport and ground handling staff greeting the first flight. The carrier will operate the 3,222-kilometre route using its fleet of 145-seat A220-300s and faces competition from easyJet. 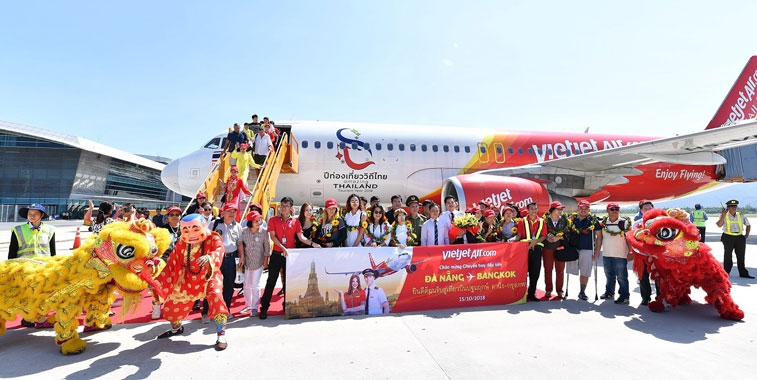 Thai VietJet Air commenced flights on a new daily service between Bangkok Suvarnabhumi and Da Nang in Vietnam on 15 October. The airline will face direct competition from Bangkok Airways on the airport pair. Krakow Airport welcomed the arrival of Transavia’s new service from Eindhoven on 9 October, with a ribbon cutting ceremony taking place to officially open the route, with a traditional cake also being present. Pictured cutting the ribbon is Radoslaw Wloszek, CEO of Krakow Airport, plus the crew of the first flight: Mattijs Notkamp; Niels Huber; and Crystal Franken. Transavia will operate three weekly flights on the 1,022-kilometre sector, facing competition from Ryanair. 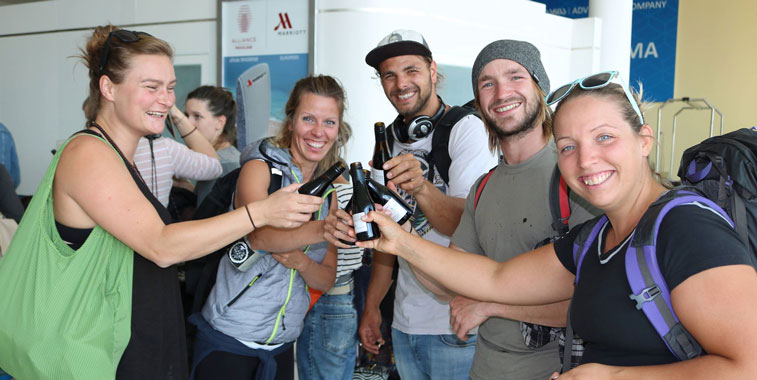 Passengers on the first Wizz Air flight between Vienna and Kutaisi were handed a small bottle of Georgian wine as they touched down at the latter airport on 11 October. The route between the Austrian capital and Kutaisi will be flown by Wizz Air twice-weekly (Thursdays and Sundays) using its fleet of 180-seat A320s.