American Airlines remains top carrier at Washington Reagan with 50% of annual capacity since 2016; airline’s seats static at capital airport in 2018 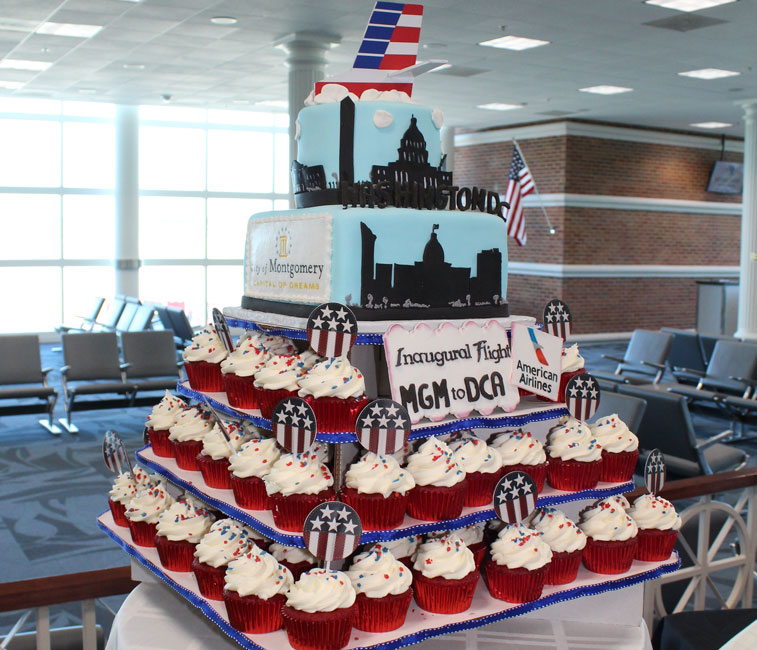 American Airlines is the largest carrier at Washington Reagan, accounting for half of the airport’s two-way capacity in 2018. The airline offers 69 destinations from Reagan during the week commencing 16 October, with 68 of these being domestic. American initiated a route between Reagan and Montgomery on 7 June, with the Alabama airport producing this eye-catching sweet treat showstopper alongside US-themed cupcakes.

American Airlines is the largest US-registered airline, according to available capacity in 2018, with 256.9 million seats on flights across its route map, compared to 233.8 million for second placed Delta Air Lines. Washington Reagan is the eighth biggest base in American’s network in 2018, based on available departing seats. Reagan handled around 24 million passengers in total in 2017. Compared to the other airports in the Washington area, it welcomed fewer passengers than Baltimore/Washington (26.37 million) but more than Washington Dulles (22.79 million).

American Airlines offered 3.87 million two-way seats on flights serving Reagan in 2009. Over the next five years its capacity at the airport experienced some minor fluctuations. In 2013, it provided 3.78 million two-way seats on its Reagan services, making it the third largest published carrier at the airport. In December of that year, American officially merged with US Airways to form the American Airlines Group. US Airways was by far the biggest airline at Reagan in 2013, accounting for 46% of the airport’s two-way capacity. The two carriers continued to operate under their separate brands in 2014, so there was no impact on American’s Reagan operations that year. However, on 16 October 2015, the last flight was flown under the US Airways code, with all future flights operating under the American code and brand. The incorporation of the US Airways network from that date onward had an immediate effect on the carrier’s capacity at Reagan, with a 67% increase in two-way seats taking place in 2015. The full impact was felt the following year when American and former US Airways services were combined under one code for a full year for the first time. American’s capacity at Reagan leapt up 145% in 2016, with 14.86 million two-way seats available. It has remained relatively stable since then, with only a marginal decline to 14.67 million seats in 2018. 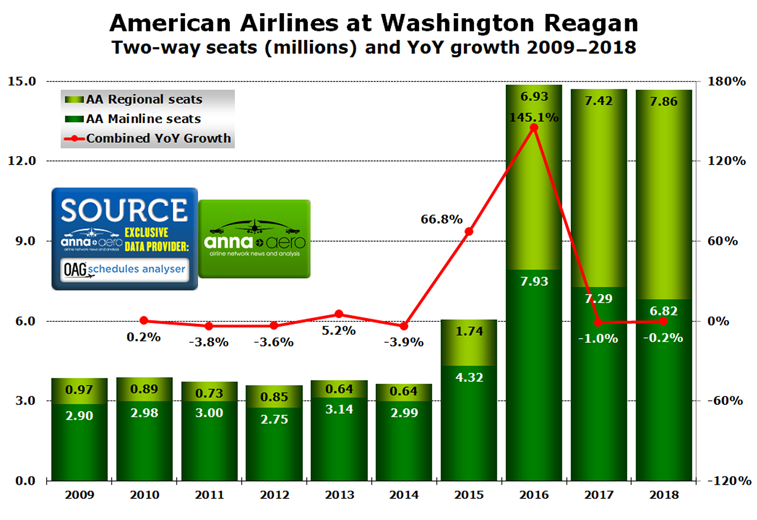 Over the past 10 years, American has always deployed a mix of mainline and regional operations on its Reagan services. Regional operations include flights provided by regional subsidiary or partner carriers under the American brand and AA code. The proportion of the carrier’s Reagan capacity provided by regional operators increased significantly following the merger with US Airways. In 2013 regional carriers accounted for just 17% of American’s seats serving the Washington airport. The proportion of total seats provided by regional operators jumped to 47% in 2016, and has continued to increase, reaching 54% in 2018. All of American’s regional flights are currently operated under the American Eagle brand and the AA published flight code. The partner carriers operating these American Eagle flights from Reagan in 2018 are Republic Airlines, PSA Airlines, Trans States Airlines and Envoy Air. For the purposes of this analysis, where we refer to American’s operations and capacity from Reagan, this includes all mainline and American Eagle services unless otherwise stated.

Half of airport’s capacity operated by American Airlines

In 2009, American’s operation at Reagan only accounted for 15% of the airport’s total capacity and it was the second largest airline at the hub, based on available seats. In 2018 American is the largest carrier and accounts for half of the facility’s arriving and departing seats. Unsurprisingly, the largest single jump in market share occurred between 2015 and 2016 as the full effect of the US Airways merger became apparent. The carrier’s share of seats jumped up by 29 percentage points from 2015 to 2016. 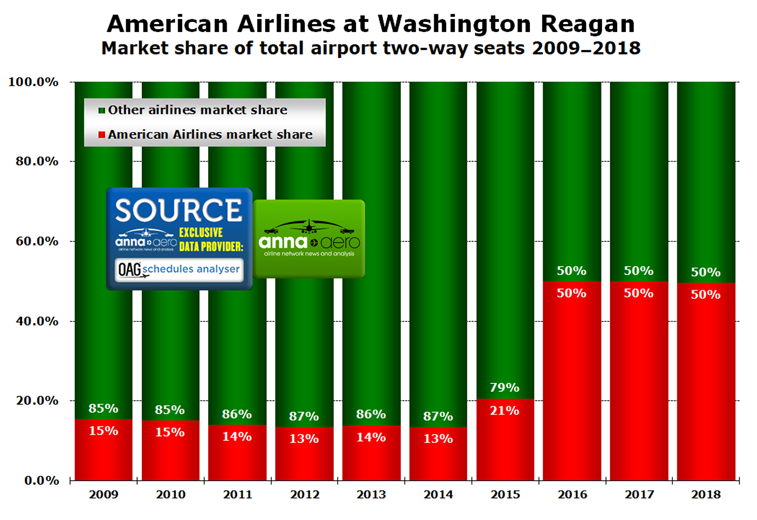 According to OAG data, American will serve 69 scheduled destinations from Reagan during the week commencing 16 October. Its biggest link from the US capital airport, based on weekly departing seats, is the connection to Boston, on which it provides 16 daily departures on week days, with five flights on a Saturday and 12 on a Sunday. It offers 11,000 weekly departing seats on this service, 7.7% of its total from Reagan.

Most of the destinations served from Reagan fall within a 1,250 statute-mile radius of the airport. This is due to the ‘Perimeter Rule’, a federal regulation that restricts the non-stop flights that can be offered from the Washington hub to a maximum sector length of 1,250 statute miles, with the odd exemption. As a result of federal exemptions, the airport’s website points out that flights are now permitted to a number of airports outside of the ‘Perimeter’. These are: Austin, Denver, Las Vegas, Los Angeles, Phoenix, Salt Lake City, San Francisco, San Juan, Seattle and Portland. Reagan itself highlights how it serves primarily as a short-haul airport while Dulles serves as the region’s long-haul facility. The Perimeter Rule explains why American has only one international destination among it network of Reagan routes, with this being the relatively short 576-kilometre connection to Toronto Pearson. 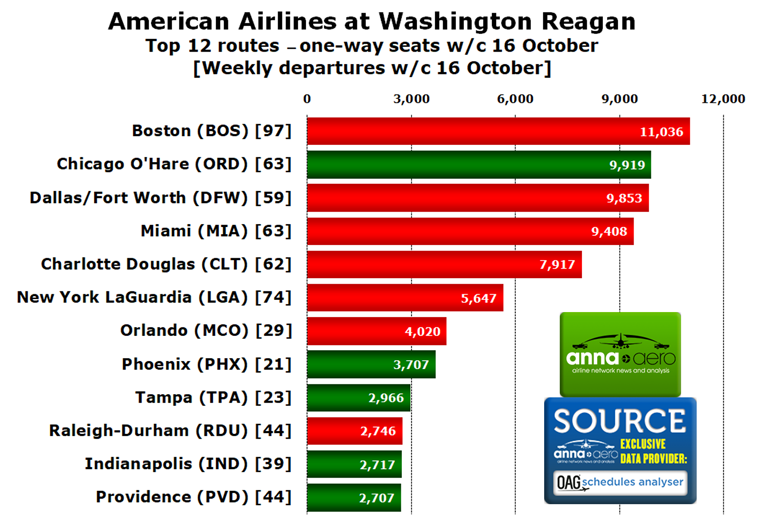 Five of American’s top 12 Reagan routes have seen an increase in capacity in 2018, when the week commencing 16 October is compared to the equivalent period last year (highlighted in green). The strongest percentage increase in departing seats has come on services to Chicago O’Hare, with weekly capacity on the Windy City connection up 16% as a result of nine additional frequencies being added to the schedule. Seven of the top-ranked routes have witnessed a decline in weekly capacity (highlighted in red) since last October. The largest percentage cuts have come on the links to Orlando (down 7.4%) and Charlotte Douglas (down 7.1%). American has increased its net route count at Reagan by two destinations in 2018, compared to the equivalent week in October 2017, adding new connections to Little Rock, Tallahassee and Montgomery, but dropping a link to Southwest Florida.

According to anna.aero’s New Routes database American will launch another new connection from Reagan in February 2019 when its starts a service to Oklahoma City. This will be operated daily by Republic Airlines, which will operate E175s on the sector under the American Eagle brand. 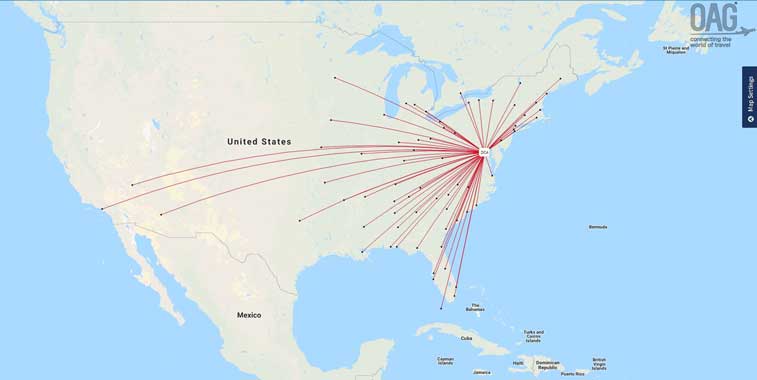 Most destinations served from Reagan fall within a 1,250 statute-mile radius of the airport due to the ‘Perimeter Rule’, a federal regulation that restricts non-stop flights that can be offered from the Washington hub to a maximum sector length of 1,250 statute miles. There are some exemptions, with routes now permitted to a number of airports outside of the ‘Perimeter’, including Austin, Denver, Las Vegas, Los Angeles, Phoenix, Salt Lake City, San Francisco, San Juan, Seattle and Portland. American only offers one international service from Reagan, with that being Toronto Pearson.