MEB3 carriers’ leading airport pairs via hubs revealed; Manchester-Bangkok only link to appear in top 20 connections for all three 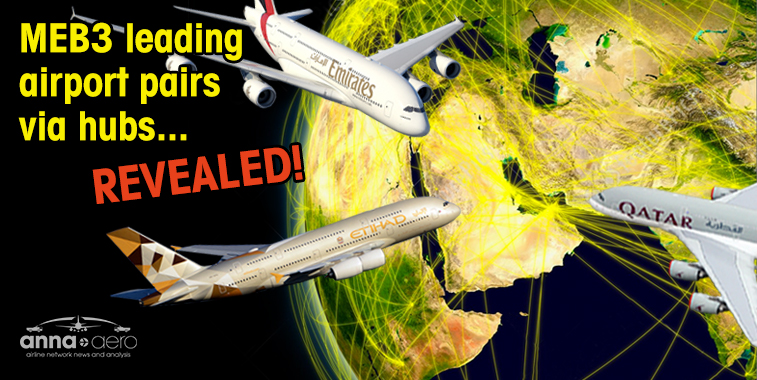 In 2017 roughly 147 million passengers passed through Abu Dhabi, Doha and Dubai airports, with many of them flying on MEB3 carriers Emirates, Etihad Airways and Qatar Airways. In this report, anna.aero confirms the city pairs which are the most lucrative for the airlines via their respective hubs in the Middle East based on 2017 data.

The previous time that anna.aero looked at connecting flows for Emirates, Etihad Airways and Qatar Airways via their respective hubs in Dubai, Abu Dhabi and Doha, the research looked in-depth at the leading airports for generating connecting traffic for the MEB3 members. This time anna.aero has gone further, looking at the leading airport pairs for traffic via the airlines’ hubs. An initial look shows that the three combined offer over 20,000 unique city connections via the Middle East, with only one airport pairing appearing in all three of the carriers’ individual top 20 connections. It should be noted that these figures exclude non-revenue passengers.

Emirates takes advantage of unserved Bangladesh to US market

London Heathrow was the leading destination for connections by Emirates passengers in 2017, accounting for 2.83% of the airline’s connecting traffic last year. However, among the airline’s top 20 airport pairs via Dubai, it only appears twice when referencing OAG Traffic Analyser data. When looking at the top 20 airport pairs for Emirates passengers, it shows that the top link, between Karachi and Jeddah, is already served by multiple carriers, while the second leading airport pair, from Dhaka to New York JFK, is the largest city pair which is currently unserved. Along with the latter airport pair, a further six of Emirates’ leading services via Dubai (highlighted in light green) are not served direct by another carrier. While the top 20 routes show strong levels of demand, it should be noted that, as a collective, these airport pairs accounted for just 2.5% of Emirates’ total connecting traffic in 2017. 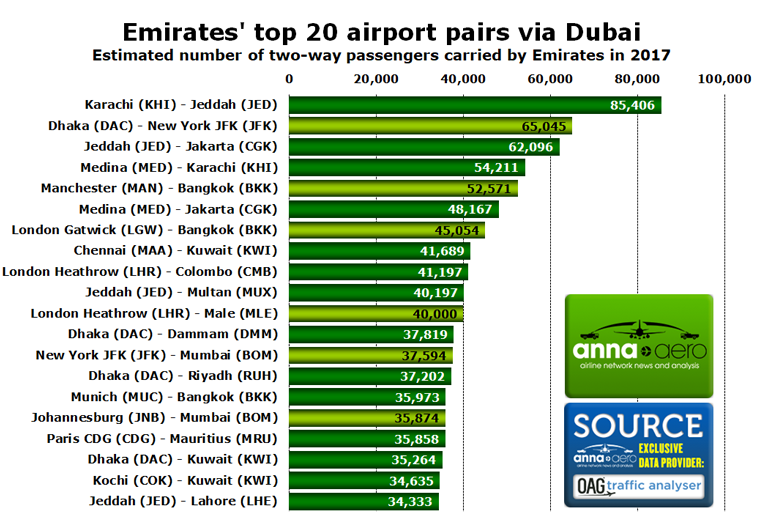 While Jeddah to Lahore is the last airport pair to make the top 20 with over 34,000 two-way passengers with Emirates last year, there are still a further 15 airport pairs that are bookable with Emirates which saw a two-way passenger flow count of over 30,000 in 2017. Just missing out on the table was the airport pairing of Delhi and JFK, with a reported 34,280 people flying between the two destinations with Emirates last year. Of the 15 airport pairs with over 30,000 Emirates customers outside the top 20, five involve the airline’s leading connection destination – Heathrow – with these traffic flows linking from Auckland (33,500 passengers in 2017; 26th largest city pair for Emirates connections), Sydney (32,900; 27th), Hong Kong (32,300; 29th), Cape Town (32,100; 30th) and Bangkok Suvarnabhumi (31,000; 33rd).

While Emirates’ top 20 airport pairs only see six routes which are not served directly by another carrier, in Qatar Airways’ top 20 connection flows 13 routes (highlighted in light green) are unserved direct markets. Qatar Airways’ leading airport pair is between Heathrow and Colombo, with this also being the top airport pair for Emirates from Europe’s largest airport. The leading unserved route is a surprising discovery, with it being between Lagos and Guangzhou, with the Doha-based operator carrying an estimated 41,600 passengers indirectly between the Nigerian and Chinese cities in 2017. While this city pairing is interesting, it should be noted that Guangzhou has a strong history with Africa, while the Guangzhou Municipal Public Security Bureau reports that over 10,000 Africans reside in the Asian city. 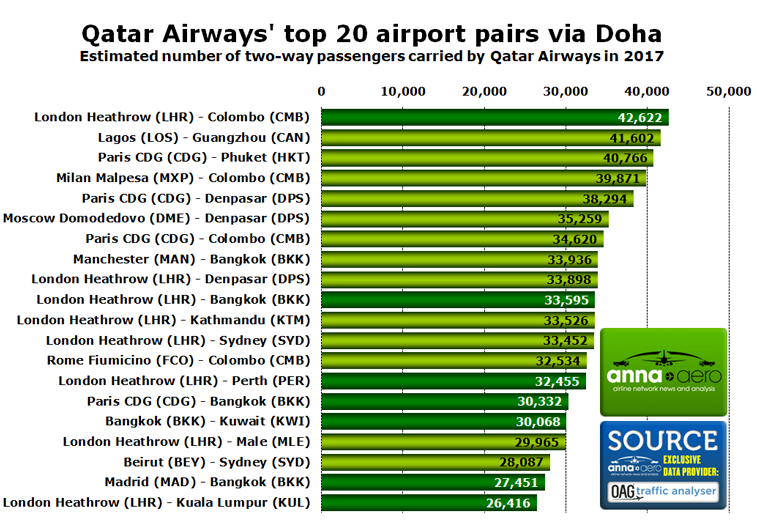 Like Emirates, Qatar Airways’ leading destination for connections in 2017 was Heathrow, accounting for 3.4% of traffic, followed by Kuwait (2.8% of connecting traffic) and Bangkok (2.6%). While the London hub was top for Emirates, it only appeared in two of its top 20 connecting airport pairs. For Qatar Airways the story is different, with it being involved with eight of the top 20, with the leading service from Heathrow for Qatar Airways being Colombo which was also the same for Emirates. In fact, it would appear that the Doha operator transported more people between Heathrow and Sri Lanka, albeit by just 1,400 passengers (3.5% more). Colombo was also a popular route for passengers from other cities, with it appearing in the top 20 more than once, with passenger flows from Milan Malpensa (39,800 indirect passengers in 2017), Paris CDG (34,600) and Rome Fiumicino (32,500) being high.

In 2017 Etihad Airways’ top connection was between Jeddah and Kozhikode in India, with it transporting over 90,000 passengers on the city pair via its Abu Dhabi hub. However, while for last year this was certainly impressive, the result for 2018 will be impacted. The airline has cut its capacity to the Indian city by 37% in 2018, with it going from up to four daily flights in October 2017 to just a twice-daily rotation in October this year. Interestingly, this airport pair was also the largest for passenger flow across all MEB3 members, with it being the only one to break the 90,000 passenger barrier according to OAG Traffic Analyser data. It is also one of seven routes (all highlighted in light green) in Etihad Airways’ top 12 which are not flown non-stop by another carrier this year. 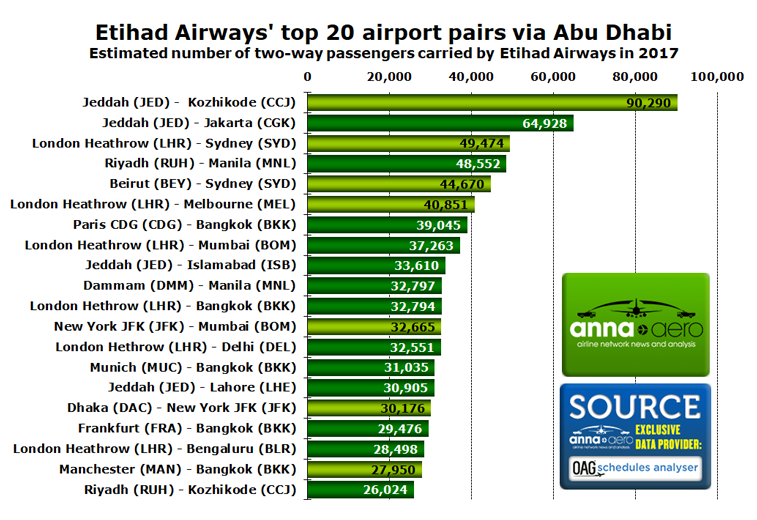 While Heathrow was the leading destination overall for all three MEB3 carriers, when it comes to total connections it was another UK airport which has claimed the title of being the only airport to be involved with an unserved connection to an Asian city which appears in all of the airlines’ individual top 20 connections. When looking at the MEB3’s city pair rankings, the only one which appears in all three is the route between Manchester and the Thai capital, Bangkok. A further look into the market between the two airports shows that just under 150,000 passengers travelled indirectly between them in 2017 via one connection, with Emirates (34% of the market), Qatar Airways (23%) and Etihad Airways (19%) being the three leading airlines to connect the two. In fourth place was another Middle Eastern operator – Oman Air – which captured 5.7% of the market in 2017 according to MIDT data. KLM was fifth (3.3%), with British Airways sixth (2.9%). Interestingly, Turkish Airlines, a growing rival for the MEB3, only managed to capture 1.9% of traffic between Manchester and Bangkok in 2017.

The combined route map for the MEB3 is evidently impressive, with the trio combined offering over 20,000 different airport pair connection options between them via their respective hubs at Abu Dhabi, Doha and Dubai.