Jet2.com to grow 12% in S19; Birmingham poised to be fastest-growing base; London Stansted to be busier than home base of Leeds Bradford 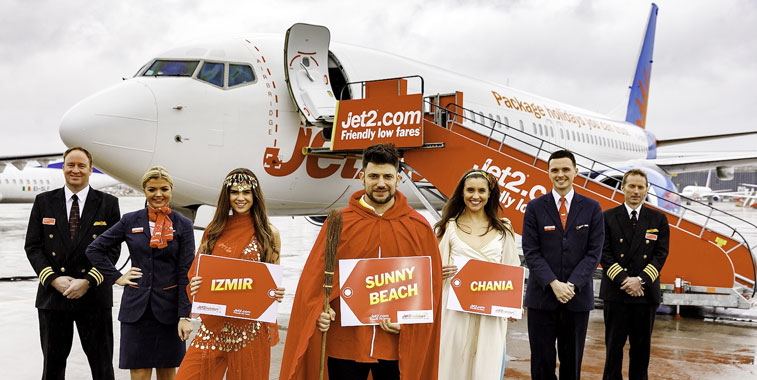 Jet2.com will be adding Bourgas, Chania and Izmir to its route map in 2019, as the carrier continues to expand rapidly from the UK. For S19, Birmingham will be the airline’s fastest-growing base, with it’s capacity poised to grow by 26% from the airport, while it will be offering 41 routes, eight more than it operated from the city in S18.

Jet2.com is an airline which has made big strides in recent years, having ordered 30 new 737-800s in 2016 and growing the number of scheduled passengers it carries from 5.79 million in 2015 to 9.64 million in 2017, a 66% increase withing two years, which is impressive considering that the airline has been operating since 2003. Within the past two years the airline has also opened two new bases, one in Birmingham and the other at London Stansted, and in 2019 both will see over 10 based units for the summer season. Currently the airline has 87 aircraft, made-up of 62 737-800s, 14 737-300s and 11 757-200s, while based on Flightradar24.com data for November 2018, it is also operating an A321 on lease. It should also be noted that during the peak summer season, Jet2.com wet-leases additional aircraft. With the airline’s expansion having been rapid in recent years, anna.aero has decided to see if this growth will continue into 2019, with an initial look at schedules showing that it certainly will.

Birmingham capacity to grow 26% in S19

Birmingham is forecast to be the fastest-growing UK base for Jet2.com next summer, with the airline scheduled to operate over 795,000 one-way seats, up 26% versus its offering in S18. Along with Birmingham, only a further three bases, namely Manchester, London Stansted and Newcastle, will see double-digit growth from Jet.com in S19, with Stansted’s growth pushing it up the base rankings, resulting in it overtaking Jet2.com’s home base of Leeds Bradford. The airline’s five other bases (highlighted in light green) will grow between 4.8% and 8.8% next summer season. Overall, Jet2.com is poised to grow its seat capacity by just over 12% in S19 versus its offering this summer. 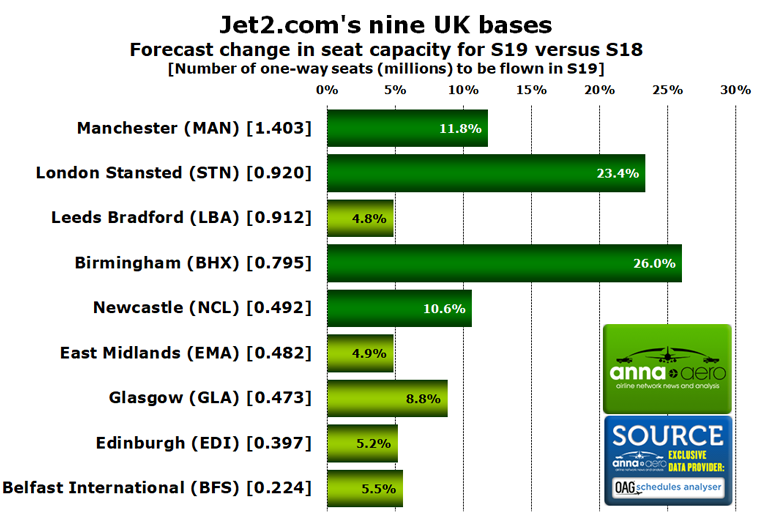 Jet2.com will be welcoming four new airports to its destination map in 2019, namely Bourgas in Bulgaria, a new country market for the airline, Chania in Crete, and Izmir in Turkey, while it will also operate from the new airport in Murcia from S19. Of the airline’s leading country markets from the UK, the one which is scheduled to see the greatest growth in S19 is Poland (11th largest market), with the carrier planning to offer 66% more seats to Krakow (only airport in Poland) next summer versus S18. Another market seeing a big boost is Turkey, with Jet2.com planning to offer 45% more seats in S19 than it did this summer. Greece (second largest market; 20% growth in departing seats next summer), Portugal (third; 13%), Cyprus (sixth; 15%) and Czech Republic (ninth; 11%) are the only other nations that are poised to see double-digit growth in S19 along with Poland. However, Spain remains the airline’s leading market, with it scheduled to account for 53% of all seats in S19, down from a market share of 55% in S18.

More than 300 routes during peak summer

S18 was the first summer season to see Jet2.com pass the 300-route threshold, with the airline poised to offer 329 routes during peak S19 based on the current published timetable. In terms of route count, the top bases for Jet2.com next summer are Leeds Bradford (49 routes in S19), Manchester (46) and Birmingham (41), with the latter base having only opened in 2017. Birmingham is presently the base to see the most new routes in 2019, with it expected to welcome eight additional summer destinations, namely Bergerac, Bourgas, Chania, Izmir, Kefalonia, Pula and Verona, while Prague will be converted from a winter seasonal to a year-round service. Overall Jet2.com has increased its peak summer route count by 205% since S10, however this does not take into account routes from the airline’s Blackpool base that closed in 2014. 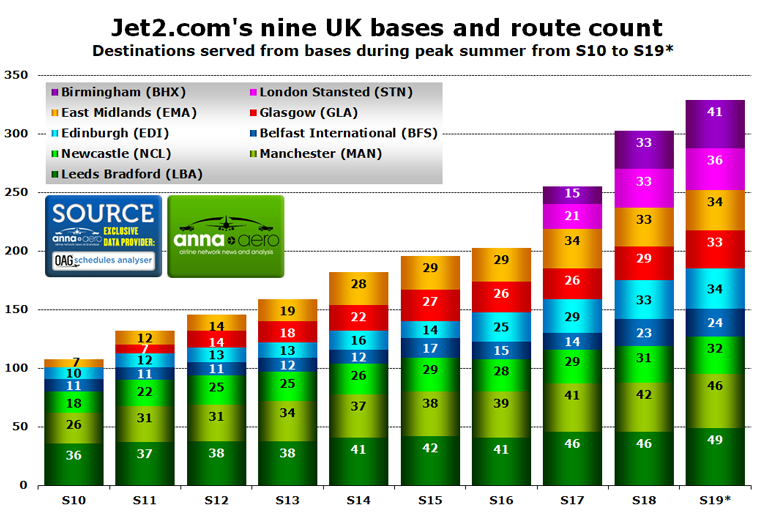 One of the key significant factors for Jet2.com in S18 is that, based on OAG data, it overtook TUI Airways in terms of one-way seats being flown, making the Leeds-based carrier the UK’s biggest leisure operator. Jet2.com offered just under 5.44 million departing seats from the UK in S18, up 25% versus S17, while TUI Airways flew 4.62 million one-way seats, with this only being a 2.6% increase against last summer when it offered more seats that Jet2.com. Overall Jet2.com was the UK’s fifth largest carrier with regards to flown seats this summer after British Airways, easyJet, Ryanair and Flybe. With the latter UK regional carrier consolidating in the coming months, and Jet2.com planning further growth in S19, it is likely that the leisure carrier will become the UK’s fourth largest airline next summer season.

Jet2.com is a very seasonal operator, with UK CAA data showing that in 2017, just under 7.94 million passengers flew with the airline between 1 April and 31 October. This means that over 82% of Jet2.com’s passengers last year flew within the summer season. However, while this is very high, it should be noted that this percentage has fallen from 85% in 2015 and 84% in 2016, meaning that the airline’s seasonality profile is steadily reducing as a result of its recent expansion. 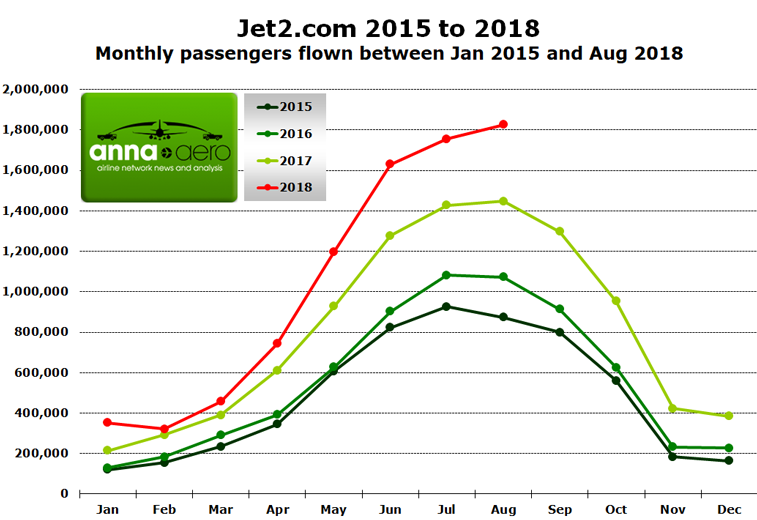 For the first time this year, Jet2.com carried over 1.80 million passengers in a month, with this recorded in August. This result is 26% greater than the number of passengers it carried in August 2017, and 109% better than the airline’s total during August 2015. According to the parent company’s last financial statement covering the period year-ending 31 March 2018, average load factors, including its new operating bases at Birmingham and London Stansted airports, increased to 92.2% versus 91.5% during the previous 12-month period. 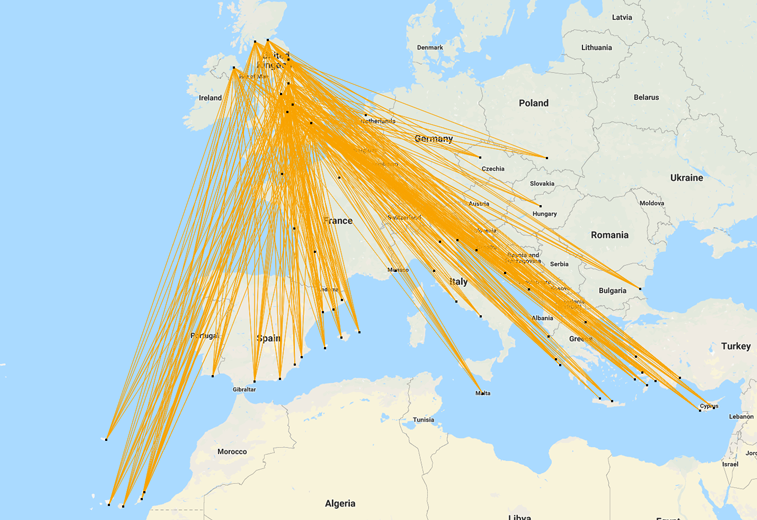 Jet2.com’s route map next summer will see four new airports added, namely Bourgas, Chania, Izmir and the new airport in Murcia. In total the carrier will offer 329 routes from its nine UK bases, with Birmingham being the biggest recipient of new services, with it offering eight additional routes in S19 versus S18.