Wizz Air to open Krakow base, stationing two A321s and opening 12 routes; leading airport in CEE nations not yet served by carrier 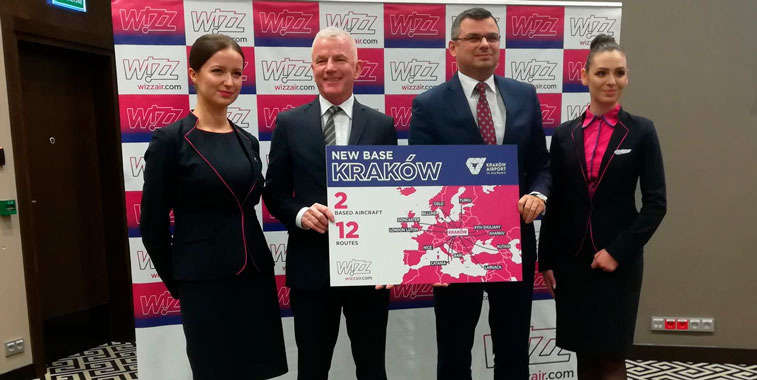 Wizz Air announced on 21 November that it will open its 26th base at Krakow Airport in Poland, stationing two A321s and opening an initial 12 routes. Pictured at the base announcement with two of the airline’s crew are Stephen Jones, EVP and Deputy CEO, Wizz Air, and Radoslaw Wloszek, CEO of Krakow Airport. Based on OAG Schedules Analyser data for 2018, Krakow Airport is currently the largest of all airports in CEE nations to not be served by Wizz Air.

Wizz Air confirmed on 21 November that it will open its 26th base at Krakow Airport. The airline stated during the press briefing that it would station two A321s at the airport, with this investment allowing the carrier to open 12 new routes. Of the routes which the airline has confirmed, only two are presently flown by other carriers, with services to London Luton and Oslo Gardermoen going head-to-head with easyJet and Norwegian respectively. More detail of the new routes, days of operation and launch dates can be found in the following table. Interestingly Ryanair is currently the largest airline at Krakow, occupying just under a 47% market share of seats in 2018, but Wizz Air will not compete directly with the airline on any route.

Once Wizz Air has based its second aircraft at the airport, it will offer a total of 45 weekly departures from Krakow, offering over 20,000 weekly two-way seats based on the 230-seat configuration of the A321. Commenting on the base announcement, Stephen Jones, EVP and Deputy CEO, Wizz Air, stated: “We chose Krakow to be our newest base in Poland as we see the potential and the demand for low-cost travel in this city which is one of the most popular tourist destinations as well as a rapidly developing business hub.” Jones’ statement is supported by the fact that low-cost seats from Krakow have grown at a double-digit rate since 2014, with 2015 (11% growth in LCC seats versus 2014), 2016 (17%), 2017 (22%) and 2018 (21%) showing strong gains on the previous year. Further support for Krakow’s demand for low-cost travel is also reported in the business model’s market share of all seats from the airport, growing from 50% in 2008 to just under 70% this year.

Based on OAG Schedules Analyser data, when looking at the top airports within the CEE nations, Krakow is presently the largest to not be served by Wizz Air. The only other airport within the top 15 airports within the CEE not yet served by the ULCC is Zagreb. Of the remaining 13 airports within the category, all are served by Wizz Air, with the airline’s average market share of seats from these airports in 2018 being just over 21%, with Budapest (30% Wizz Air market share in 2018), Bucharest (24%), Sofia (31%), Gdansk (48%), Vilnius (26%), Katowice (60%) and Wroclaw (21%) seeing a greater or equal share to the average. What is interesting to note is that Wizz Air has the greatest market share at Katowice, an airport that is situated just 90 kilometres away from Krakow. 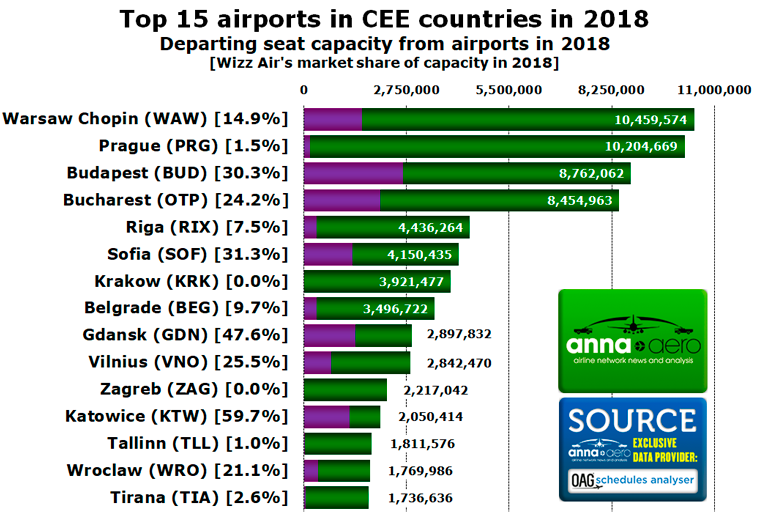 Stopping Ryanair in its tracks

Another reason for Wizz Air’s decision to enter the Krakow market is to stop Ryanair from taking further control of the market. In 2018, Europe’s largest low-cost operator will occupy just under 47% of all seats from Krakow, with this having grown from 44% in 2017 and 41% in 2016. Ryanair also has operations from Katowice Airport, where it has maintained just a 10% share of seats between 2015 and 2018, while Wizz Air during the same period has seen its market share of Katowice seats go from 68% in 2015 to 60% this year, showing that it has lost market power in this part of Poland in recent years. 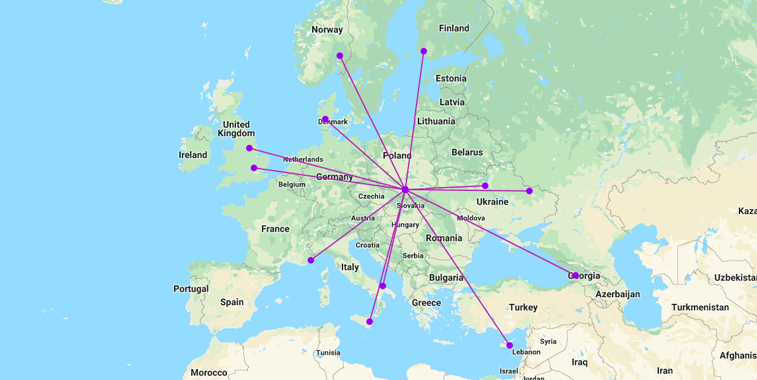 Wizz Air will open its newest base at Krakow in 2019, with the airline committing two A321s to the airport, opening up at least 12 new routes, namely London Luton, Doncaster Sheffield, Billund, Oslo Gardermoen, Turku, Kiev Zhulyany, Kharkiv, Kutaisi, Larnaca, Catania, Bari and Nice. Only two of the routes will face direct competition, while it is interesting to note that none of the routes will go head-to-head with Ryanair, the largest operator at Krakow in 2018.