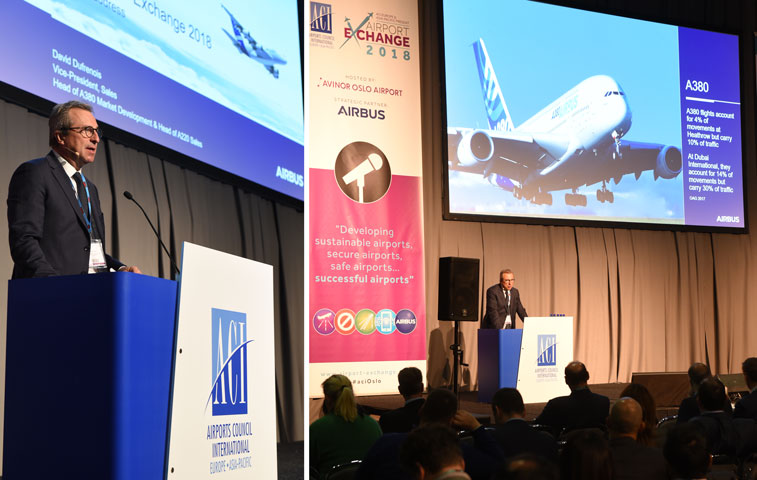 Airbus Keynote Address: David Dufrenois, VP Sales, Head of A220 Sales, Qatar and A380 Market Development. Addressing the Keynote Arena (total event visitation 1,207) Dufrenois reflected how passenger global traffic had grown 36% over 10 years, whereas aircraft movements have only risen by 14%. However, the A380 has helped to grow passengers at capacity-constrained airports. Dufrenois cited Heathrow as an example where the A380 only accounts for 4% of movements, but for 10% of total traffic.

28 November; Lillestrøm: Airbus held its first-ever Airports-Devoted Conference at ACI Airport Exchange in Oslo, with the symposium focusing on: “New possibilities for airports by Airbus”. The event centred on the development of the Airbus programme, and how the manufacturer can work with airports and airlines to further develop new routes and make existing routes even more efficient and successful.

The “New possibilities for airports by Airbus” conference included the following content: Dr Michael Kerkloh, CEO Munich Airport and President ACI EUROPE, spoke about Munich’s experience with the A380 after Lufthansa transferred five of its double-decked flagship units to the hub for S18. Kerkloh said how the A380 helped to improve efficiency and competitiveness through lower unit costs. He added that the aircraft can stimulate both transfer and O&D traffic, quoting growth on Lufthansa’s service between Munich and Hong Kong as a key example. Lander Dominguez-Ruiz, Director Fleet Planning, Acquisition and Contracts, Aer Lingus spoke of the IAG airline’s game-changing transatlantic operations using the soon-to-arrive A321LR. “Over the next few years we will grow our transatlantic fleet to 30 aircraft, which includes a narrow-body fleet of up to 14 units from Airbus.” Dominguez said the A321LR will be “a narrow-body aircraft with wide-body economics”. Wolfgang Reuss, SVP Network Planning, airBaltic, talked of the airline’s decision to develop into an all A220-300 carrier, with the airline expected to have up to 80 in operation over the coming years; transitioning to an all-A220-300 fleet by 2024. Reuss said the improved range of the A220-300 will allow the airline to connect to more non-stop destinations than ever before, and that the aircraft makes more thin, medium-haul sectors viable from Riga. From the environmental perspective, Reuss also highlighted how the A220-300 produces 20% less CO2 than its current 737 and Q400 aircraft. Peter Downes, Aviation Director, London City Airport explained that part of his airport’s new aviation strategy includes a step-change in long-haul expansion. Downes highlighted how the A220 could be used to open up new routes from London City, including an all-premium non-stop service to New York, with up to 50% more seat capacity than British Airways’ current one-stop A318 service. Downes also said there could be potential for all-premium A220 services to other Eastern US and Canadian destinations such as Boston and Toronto. In addition, he believes there is the potential for expanding this all-premium product on flights from London City to the Middle East hubs. Downes also suggested that the A220 could unlock a higher-density two-class operation to Istanbul. 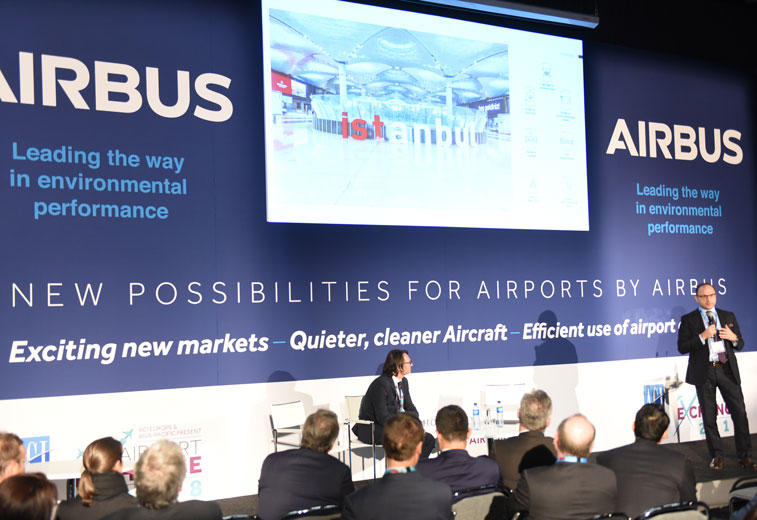 İGA’s Mert Başar, CCO of the new Istanbul Airport, explained the future potential of the world’s newest mega-hub and its advantages over others, plus Istanbul’s potential as an A380 market as a result of its spacious new capacity. Başar later took part in a one-to-one on stage interview with anna.aero’s Publisher, Paul Hogan. The full interview will be available in the next edition of anna.aero (the Official Airbus Media Partner). 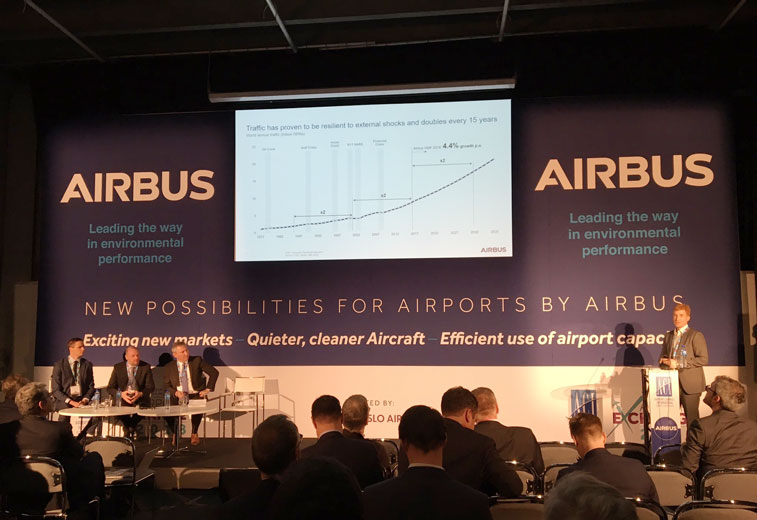 Fabrice Valentin, Head of Market Research and Forecast, Airbus, presented the development of air travel over the next decade. “We expect air traffic to grow at 4.4% per annum through 2032.”  He added that, while over the past 30 years air transport’s centre of gravity has moved South and East away from its traditional location between North America and Europe, that by 2037 this centre of gravity movement is expected to slow as air traffic equalises globally. 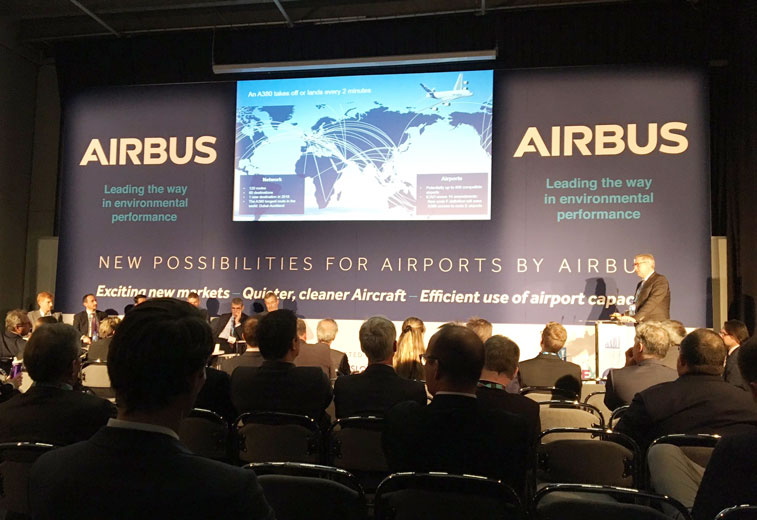 Laurent Boisson, Deputy Head of Air Transport Affairs, Airbus. Boisson presented the airports with ‘A family of aircraft matched to market needs and sustainable air transport growth’. He made the case for how the Airbus family can offer new long-haul route opportunities, network flexibility, environmentally friendly operations and solutions for both city airports and congested mega-hubs. 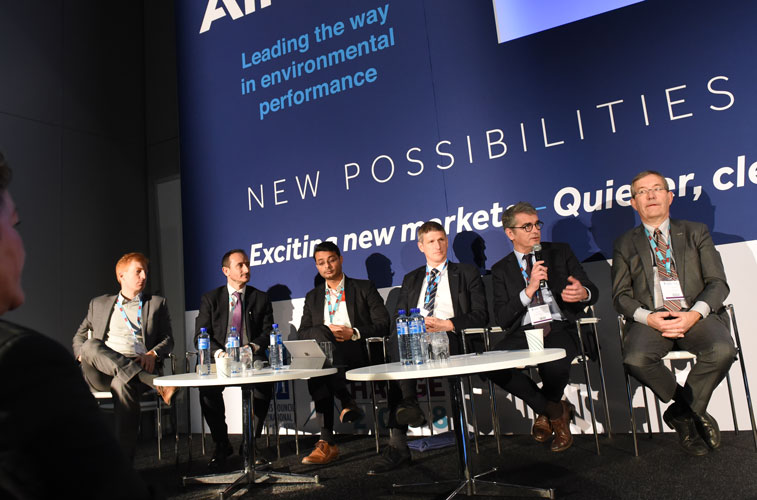