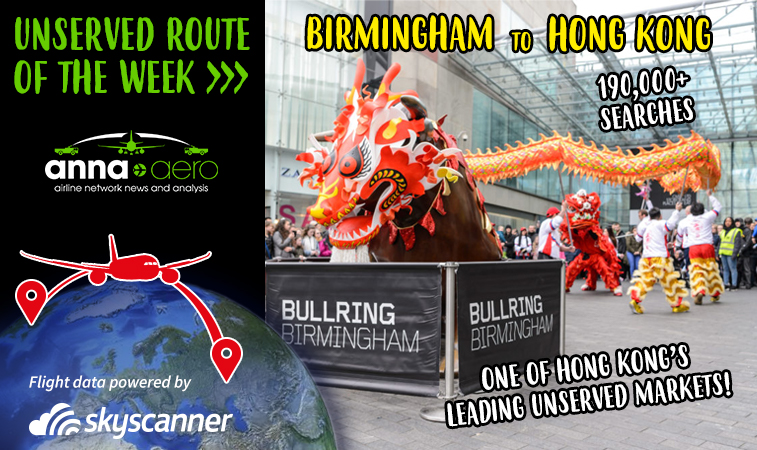 anna.aero is happy to bring back its popular Unserved Route of the Week feature, brought to you in partnership with Skyscanner, one of the world’s leading flight search engines which has 70+ million unique visitors per month. The first route that is being undertaken in this return is a connection between Birmingham and Hong Kong. Data from Skyscanner shows that during the past 12 months (November 2017 to October 2018), some 190,000+ people have searched for a direct flight between the two cities.

Looking at the breakdown of data in more detail, it shows there to be a higher demand for the link from Birmingham, with the search split being 72% versus 28% in favour of the UK city. Overall though, the average number of searches for this route per month is 16,096. If this was looked at in terms of potential passenger numbers, it could result in an average annual PDEW figure of 264 people. 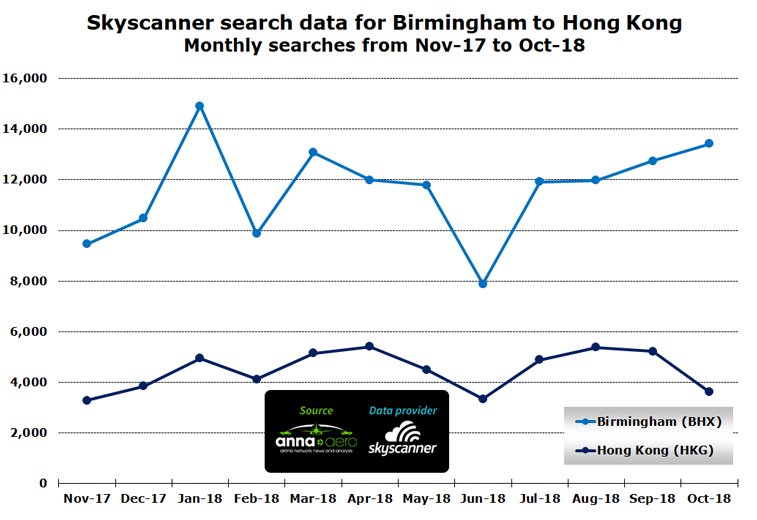 Along with this data from Skyscanner, anna.aero’s analysis of OAG Traffic Analyser data reveals that Birmingham is currently the sixth largest unserved market from Hong Kong, with some 38,000 passengers travelling via the two airports between July 2017 and June 2018. This also makes Hong Kong the second largest unserved market from Birmingham in the world, after Bangkok, a previous Unserved Route of the Week.

Commenting on the reason to support a direct service between Birmingham and Hong Kong, Tom Screen, Acting Aviation Director, Birmingham Airport, stated: “The Birmingham-Hong Kong route is key to our aspirations, not just as an airport, but as a region. HSBC have recently moved their UK head offices to Birmingham and they have engaged with us regarding a direct service already. As well as this, connectivity to mainland China is hugely important to other significant corporate organisations including Jaguar Land Rover and Caterpillar, and obviously Hong Kong is the key hub in that part of the world.”

A breakdown of UK CAA data shows that 1,865,704 passengers travelled indirectly between the UK and Hong Kong in 2017, up 7.8% versus 2016. This is a growth trend that has continued into 2018, with data for the first nine months of the year showing that traffic has risen 3.5% versus the same period of 2017. What is interesting to note, is that of these passengers, about 78,000 leak from Birmingham’s core catchment. Currently there are 70 weekly departures between the UK and Hong Kong, with Cathay Pacific offering a daily service to both Manchester and London Gatwick, along with five daily departures from London Heathrow. Along with Cathay Pacific, British Airways also offers a twice-daily service from Heathrow to Hong Kong, while Virgin Atlantic provides a daily rotation. Hand-picked by HSBC, Birmingham will soon become the new UK HQ for the banking giant. With the company replacing its London base with a new facility in the UK’s second city, could Cathay Pacific Airways be tempted to switch some of its London capacity to Birmingham? With 116,000 passengers from Birmingham’s catchment taking either a London service or an indirect flight, there is certainly a sizeable market to support a direct connection with Hong Kong.

Presently the leading carrier for connecting passengers between Birmingham and Hong Kong is Emirates, with the Dubai-based operator responsible for carrying 45% of the 38,000 passengers between the two cities from July 2017 to June 2018. It was followed by Lufthansa (14% of passengers) and Air France (11%). Interestingly, based on OAG Traffic data, Qatar Airways is growing its share of traffic between the two cities, which is interesting due to the airline’s affiliation with oneworld, an alliance in which Cathay Pacific Airways, Hong Kong’s biggest airline, is a member. In the past 12 months it has grown its share of the market between Birmingham and Hong Kong via Doha from 7.6% to 8.2%.

Given that Birmingham sees 78,000 passengers annually leak from its core catchment for a direct flight to Hong Kong, and that 38,000 additional passengers take an indirect flight from the UK’s second city to the Asian hub, a direct service would currently cater for a market of 116,000 annual passengers, not taking into account a market stimulation factor if a direct flight was introduced.

Whichever airline decides to pick-up this unserved route, it would not only be looking to capture O&D plus Chinese traffic, but also further passengers which currently fly from Birmingham to other destinations in the Far and South East of Asia, plus down into Australia and New Zealand, with these markets also growing from Birmingham.

Direct service could stimulate traffic by 34%

When looking further at Skyscanner data, it shows that the average search to ticket conversion rate at Birmingham and Hong Kong for a direct flight is just over 13%, while the number of conversions for an indirect route between the two cities is 9.9% This means that if a carrier was to introduce a direct flight between Birmingham and Hong Kong, it could see a 34% increase in ticket sales without increased marketing.