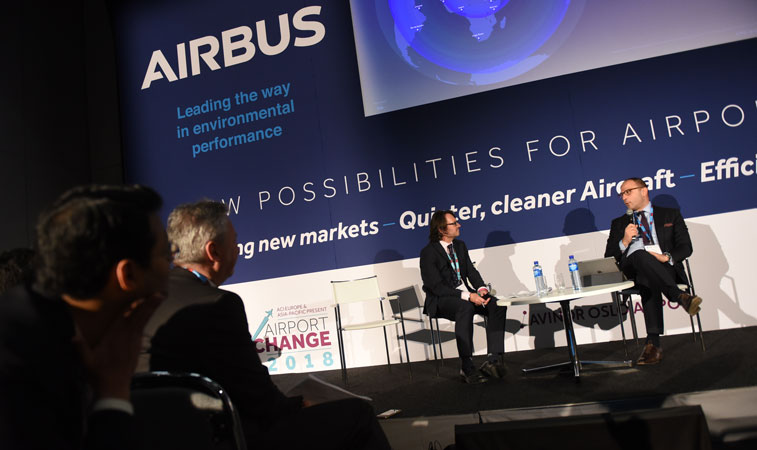 Mert Başar, CCO of the new Istanbul Airport interviewed on stage by anna.aero Publisher Paul Hogan at last week’s Airbus Airports-Devoted Conference at ACI Airport Exchange 2018, Oslo. The discussions included: Istanbul’s potential as an A380 destination, not just as a hub connector, but also with real O&D possibilities; plus how Istanbul’s geographical position makes it suitable for even more (Airbus) narrow-body feeds to major markets.

Along with Istanbul Airport, other key airports from around Europe taking part in the Airbus Airports-Devoted Conference included the CEOs of Munich and Oslo Gardermoen, plus senior operations and aviation development directors from London City Airport, Geneva, and Rome. Both Aer Lingus and airBaltic also laid out key new route plans with the A321LR and A220-300. You can find out more about these presentations at this link.

Başar on A380s and having “no slot limitations”

anna.aero: “Istanbul is the fifth largest hub in Europe, but the only one which doesn’t have A380 services. It must be the perfect hub for the A380?”

Mert Başar: “Yes. We believe so, and we want it to be. Atatürk was not ready for the A380 – the runways, ramps, jetbridges were not ready. With the launch of the new airport, we are now prepared for all commercial aircraft types. If you have enough space, like we do, then you don’t have many limitations left. If the A380 does not come with Turkish Airlines, we’re positive other airlines will be bring the A380 to Istanbul.”

anna.aero: “Give us a flavour of the 350 destinations that have been discussed as the aspirational future network of the new Istanbul Airport. What sort of destinations are you expecting to add?”

Mert Başar: “Today we have 300 destinations – 251 international destinations and 50 domestic destinations. With no slot limitations, it won’t be hard for us to reach 350. The Chairman of Turkish Airlines, İlker Aycı, says they will start developing further long-haul services, including Australia, and in 2019 they are planning to grow in Asia and Latin America, so with that strategy we can easily make 350 in the medium term.”

anna.aero: “You mention slots. You have six runways under construction, two already active. Is it good news for nearby regional airline operators; will they be able to get access to Istanbul?”

Mert Başar: “The answer is yes. Let me tell you, today I took a flight from Atatürk Airport in the morning. We were in the aircraft and the captain came on the tannoy and said we were number 17 for departure, and it would take 30 minutes for take-off. Atatürk Airport was built for 38 million passengers, but this year it is going to be almost 70 million. So even if we had the chance to double everything at the Atatürk Airport site, that expansion would only cater for today’s needs. It was a wise decision to build a new airport and overcome all of these difficulties. There are no slots left at Atatürk, and it’s hard to find new ones, even though we do not have a night curfew. With the new airport, these problems will be solved.”

anna.aero: “You have talked before of the geographical advantages that Istanbul has in being able to link many places with single-aisle and new technology aircraft. Do you have a vision about all these new destinations that the airport will be able to open up in India and elsewhere using these aircraft?”

Mert Başar: “Again the answer is yes. 70% of international traffic from Istanbul is by narrowbody aircraft, It is mostly Europe, Africa and the Middle East, along with some routes into Asia and India. We are trying to create one of the best hubs in the world, as well as the best passenger experience. Bringing those factors together, we believe that we’re going to attract many different airlines to fly short- and long-haul routes from Istanbul.” 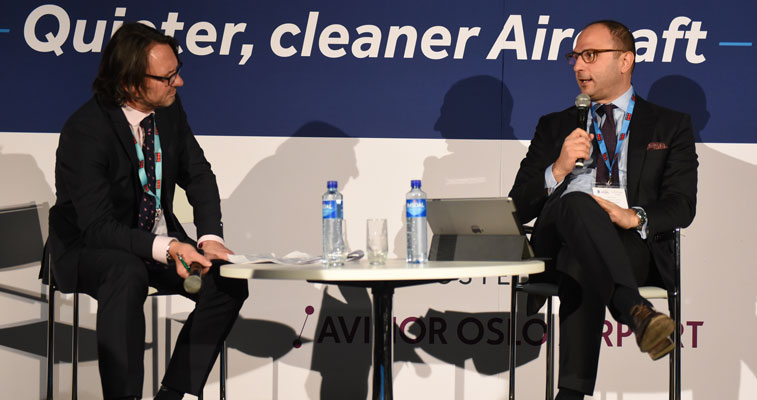 Mert Başar, CCO of the new Istanbul Airport, tells the delegation at the Airbus Airports-Devoted Conference, that the new airport will not only allow Turkish Airlines to continue pushing forward with its major growth strategy, but also opens up many new opportunities for potential carriers to serve Istanbul.

anna.aero: “You talked of Turkish Airlines and Australia, again with a geographical advantage of connecting the world. Are you seeing the possibilities of non-stop service to that part of the world with new (Airbus) equipment?”

Mert Başar: “Geographically Istanbul has the advantage, while Atatürk Airport last year enjoyed a 9%-10% increase in passengers, despite all of the limitations that it has. Turkey saw over 32 million tourists last year, a figure which will grow to 40 million in 2018. So Istanbul’s new airport is aiming for long-haul carriers to maintain this growth and new technology aircraft, including the A350 as an example, will be an instrument for us, and for all the other airlines, operating from Istanbul Airport.”

anna.aero: “Turkish Airlines is a very dominant user of the hub, but do you think that there is going to be a re-balancing slightly, and there will be a lot of opportunities for other airlines, perhaps not necessarily with Star Alliance, but other carriers interested in interline opportunities with Turkish Airlines?”

anna.aero: “To summarise, you are obviously very optimistic. You don’t build an airport like this unless you’re optimistic, but we have all had upsets and disruptions over the last few years. You’ve seen the figures showing Turkey’s return to growth, across all airports, not just Istanbul, and the return of tourists to Turkey in great numbers.”

Mert Başar: “Of course! As a matter of fact, we have completed our work on the world’s largest terminal, which has a 90 million passenger capacity, in 42 months. I think that we have done our part. From now on, it all depends on the economic conditions of the world. Should we face a new crisis that we cannot control, then that will be an issue for everybody in the world. But when I check the numbers, when I look at the infrastructure that we have, when I see the plans to operate it, when I look at the city, the potential, along with Turkish Airlines’ potential, and when I talk to different airlines around the world, I am very optimistic.”