India international capacity up 5.6% in 2018; IndiGo adds most foreign seats while Sri Lanka sees the most growth this year 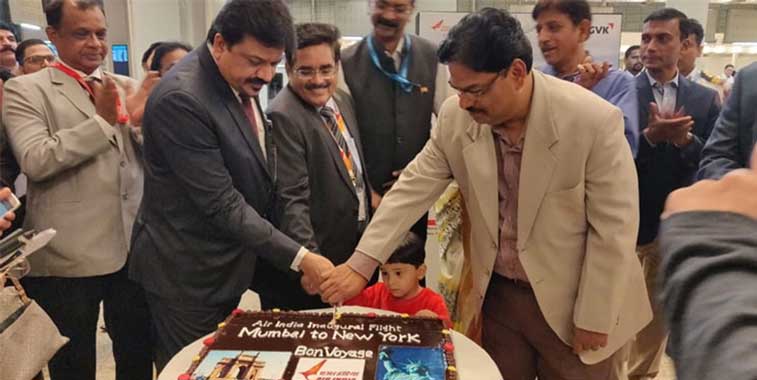 The number of two-way seats available on international flights from India grew by 5.6% in 2018 to 80.63 million. Air India witnessed the second biggest net increase in international capacity. On 7 December, the Indian flag carrier restored non-stop flights between Mumbai and New York JFK, a route it last operated in October 2010.

International capacity to/from India is continuing to grow. From 2009 to 2018, the number of two-way seats available on international services grew by 76%. In 2018, 80.63 million two-way international seats were scheduled on flights serving India, a 5.6% increase on the previous year. In the past week alone, more notable international routes have been introduced, including Air Italy and WOW air beginning services to Delhi from Milan Malpensa and Reykjavik/Keflavik respectively, plus Air India restoring a non-stop link between Mumbai and New York JFK. IndiGo also launched a new link between Vijayawada and Singapore. With this in mind, anna.aero thought it was high time to take a look at India’s international route developments trends over the past 10 years.

Jet Airways offers the most scheduled seats on international flights from India in 2018, with 9.97 million, ahead of Air India on 8.63 million. Air India Express is treated as a separate carrier, since it operates under its own IATA code. If Air India’s capacity was combined with the 5.03 million non-domestic seats flown by Air India Express, then that joint entity would be the largest provider of international capacity serving India in 2018. IndiGo is the fourth largest provider of international capacity to/from India, but the LCC was the airline with the best net growth in international seats in 2018. It increased its two-way international seat count by 1.67 million in 2018. representing a 49% increase in IndiGo’s international offering versus 2017. According to OAG Schedules Analyser, IndiGo will offer scheduled seats on 28 new international routes in 2018. Eight new international destinations have been added to the LCC’s network this year, namely Abu Dhabi, Colombo, Dhaka, Hong Kong, Phuket, Kuala Lumpur, Kuwait City and Male. 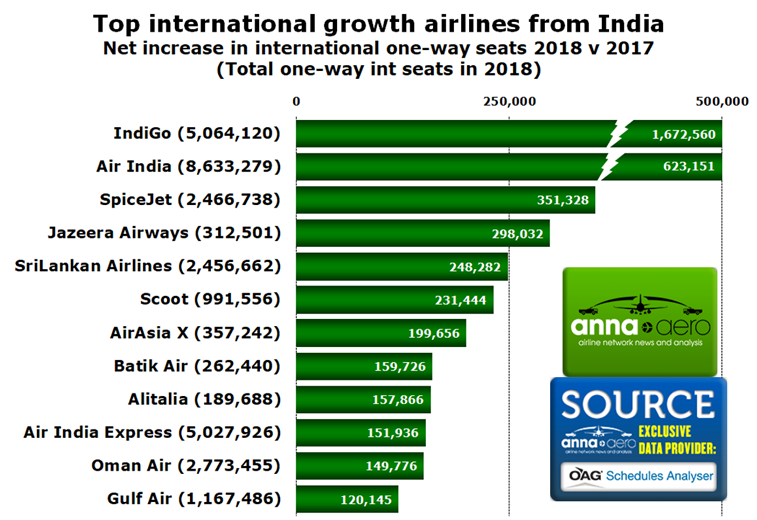 The three biggest net increases in international capacity all came from Indian registered carriers, with SpiceJet joining IndiGo and Air India to complete the top three. The only other Indian operator in the top 12 for net international increases is Air India Express, placing tenth. The eight remaining top growth carriers in 2018 include three from the Middle East, three from the Asia Pacific region, one from Europe and one from India’s near neighbour, Sri Lanka. The foreign carrier with the biggest net growth in international capacity to and from India this year is Jazeera Airways, which added 298,032 seats, after introducing a number of new routes from the country to its Kuwait City base.

The UAE is, by far and away, the largest international market from India, accounting for 28% of all one-way international seats. However, capacity to and from the UAE is down by 3.0% (11.12 million one-way seats) this year. The international country markets that have seen the strongest net growth in capacity from India in 2018 are Sri Lanka and Qatar, which have enjoyed respective net increases of 317,776 and 300,047 one-way seats. Services to Sri Lanka received a boost from IndiGo which introduced flights from Bengaluru and Chennai to Colombo, while SriLankan Airlines also added capacity in the market. Additional capacity from IndiGo was also the main factor in the increase in seats to Qatar. 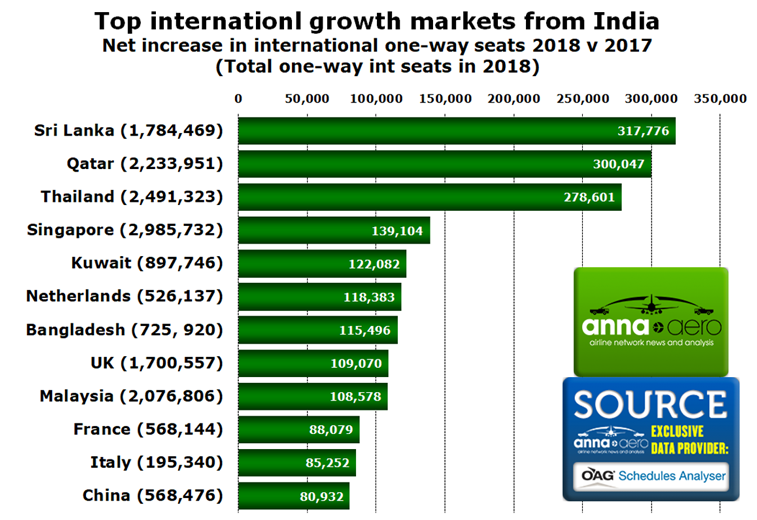 Four of the top 12 international destination markets that saw the biggest net growth in capacity from India in 2018 are in the Asia Pacific region (Thailand, Singapore, Malaysia and China), four are in Europe (Netherlands, UK, France and Italy) two are in the Middle East (Qatar and Kuwait) and two are neighbouring markets (Sri Lanka and Bangladesh).

According to anna.aero’s New Routes Database, 67 new international services have been introduced by airlines to/from India so far in 2018. A further four are scheduled to start before the end of the year including two IndiGo connections to Bangkok Suvarnabhumi from regional airports. 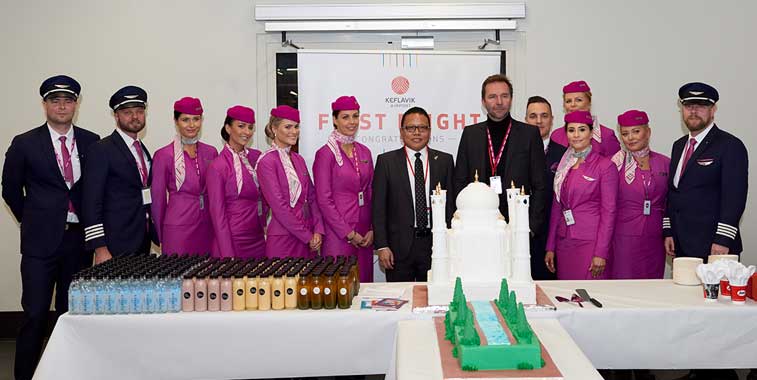 Eight of the top 12 carriers that witnessed the biggest net growth in international capacity to/from India in 2018 were foreign-registered airlines. A new entrant to the Indian market is WOW air, which began non-stop service between Reykjavik/Keflavik and Delhi on 6 December. Pictured before the inaugural departure with the airline’s crew in Iceland are T. Armstrong Changsan, Ambassador of India to Iceland, and Skúli Mogensen, CEO, WOW air.