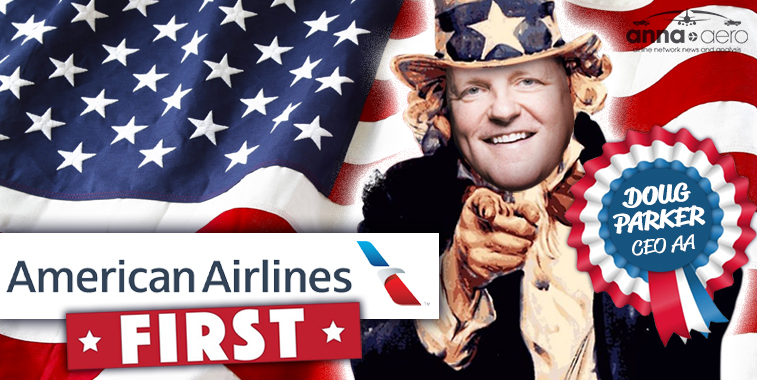 An analysis of the leading routes over the USB3’s biggest hubs reveal that it really is ‘American First’, with only three international airports making an appearance in the top 20 across Atlanta, Chicago O’Hare and Dallas Fort/Worth. Of the 60 city pairings across the three hubs, the biggest is from American Airlines, with over 32,000 passengers travelling between San Antonio and Washington Reagan via Dallas/Fort Worth in 2017.

anna.aero recently conducted an analysis of the MEB3’s leading airport pairs via their respective hubs in Abu Dhabi (Etihad Airways), Doha (Qatar Airways) and Dubai (Emirates). Due to the popularity of the feature, anna.aero has decided to carry out the same type of analysis for the USB3 at their leading airports, namely Chicago O’Hare (United Airlines), Atlanta (Delta Air Lines) and Dallas/Fort Worth (American Airlines). Unlike the MEB3, the US’ top three airlines all operate a multi-hub strategy, catering for different markets around the US. With that, this analysis should reveal some compelling insights into the airlines’ strategies via their busiest airports.

United Airlines’ biggest hub for departing seats in 2018 is Chicago O’Hare, with the Star Alliance member offering just under 44 million seats from the hub this year, up 4.9% versus the 41.96 million it flew to/from the airport in 2017. The airport is a key connecting point for United, and MIDT data shows that its leading airport pair via Chicago O’Hare is between Philadelphia and Los Angeles, with the carrier transporting over 20,000 people between the two airports via the Windy City in 2017. Of the airline’s top 20 connections via Chicago, six (highlighted in light green) were not flown non-stop by an airline in 2018. 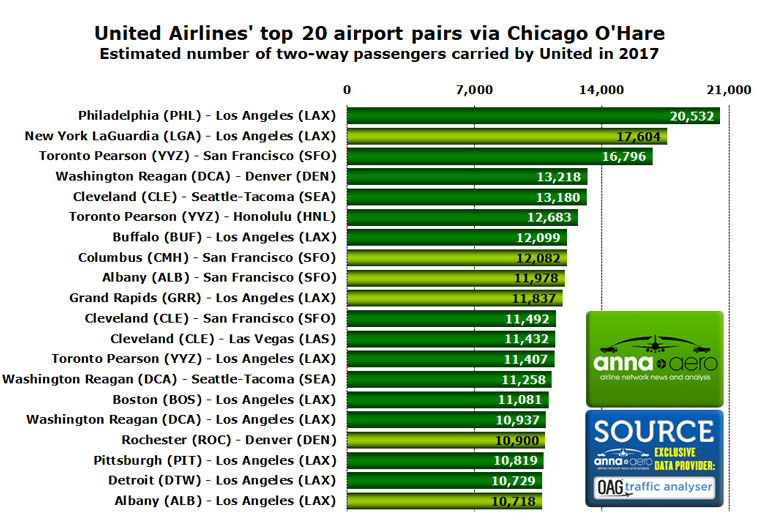 Of the top 20 connections via Chicago, four involve San Francisco and 10 Los Angeles as an O&D airport. It is not surprising to see that these two destinations are the top two routes for United from Chicago in relation to seat capacity, with the Californian airports combined accounting for 7.3% of the airline’s departing capacity from the Illinois hub in 2018. Interestingly New York LaGuardia, which is the third largest route from Chicago in 2018 with regards to departing seat capacity, is part of the second largest connecting airport pair via Chicago for United, with it connecting to Los Angeles. It is also interesting to note that this is an unserved route, however this is due to the operational limitations of the New York airport denying non-stop, full load flights to the US West Coast. In terms of connecting airports, the top destination for passengers over Chicago in 2017 was Los Angeles (2.7% of all connecting traffic in 2017), followed by San Francisco (2.4%), Cleveland (1.9%), Seattle-Tacoma (1.9%) and Boston (1.8%). 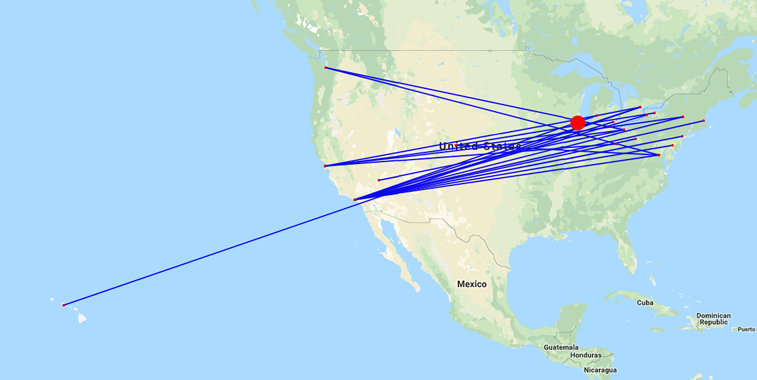 United Airlines’ top 20 city pairs via Chicago O’Hare (large red dot) in 2017 and geographical location of hub in relation to routes. The map clearly shows the hub’s positioning as a big generator of traffic between California and the North East US. The airline’s top connecting airports from Chicago include Los Angeles, San Francisco, Cleveland and Boston.

Delta Air Lines’ hub at Atlanta is the busiest in the world, with the SkyTeam carrier offering over 96.71 million seats to/from the airport in 2018, up 1.9% versus 2017. Of the airline’s top 20 connections via Atlanta, eight (highlighted in light green) were not flown non-stop by an airline in 2018, with two of the routes linking Jacksonville with West Coast cities. One of the connections involving Jacksonville, the route to Las Vegas which was the seventh biggest connection route over Atlanta in 2017, was picked up by Frontier Airlines in August. 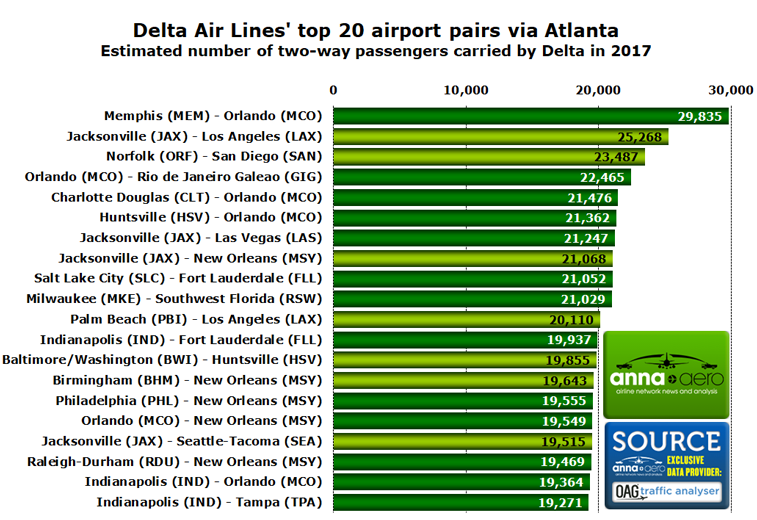 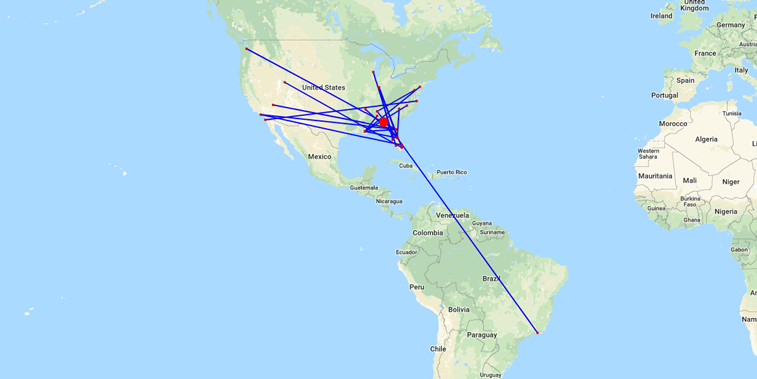 Delta Air Lines’ top 20 city pairs via Atlanta (large red dot) in 2017 and geographical location of hub in relation to routes. Florida airports play a key role in the airline’s hub network, with six of the top 10 connecting destinations overall for the airline from Atlanta being in the state, with the six accounting for close to 11% of all connecting traffic in 2017.

American links Texas to the capital via Dallas

American Airlines’ biggest hub is at Dallas/Fort Worth, where it is offering 68.13 million seats in 2018. Of American’s top connections via Dallas/Fort Worth, seven did not see a direct scheduled service this year, although it should be noted that the route between Las Vegas and Cancún will be operative as of 21 December, the day which sees Frontier Airlines begin a seasonal service on the route. It should also be noted that of American, Delta and United’s top connections via their busiest hubs, it is the former carrier which has the busiest connection, with that being the link between San Antonio and Washington Reagan, a pairing which saw over 32,000 connecting passengers with American over Dallas in 2017. In fact, the US capital airport features in the top three connecting pairs via Dallas, all going unserved. What is interesting to note is that, although it is responsible for the top three routes, when it comes to top connecting destinations overall, it places 20th out of Dallas. 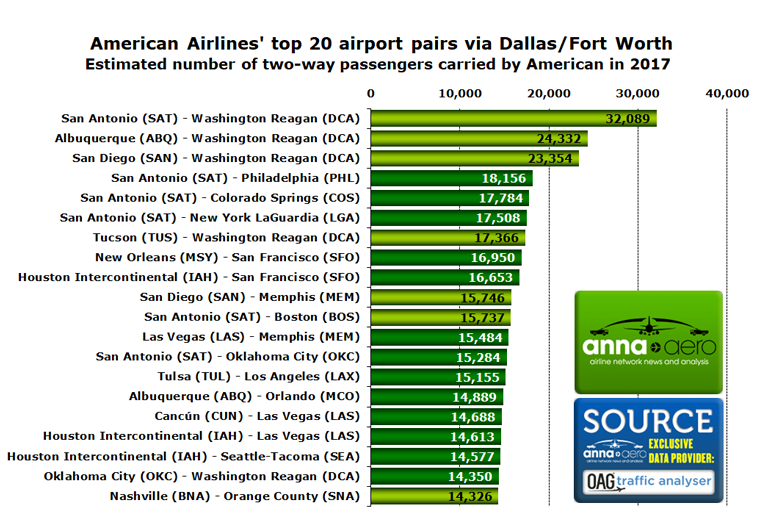 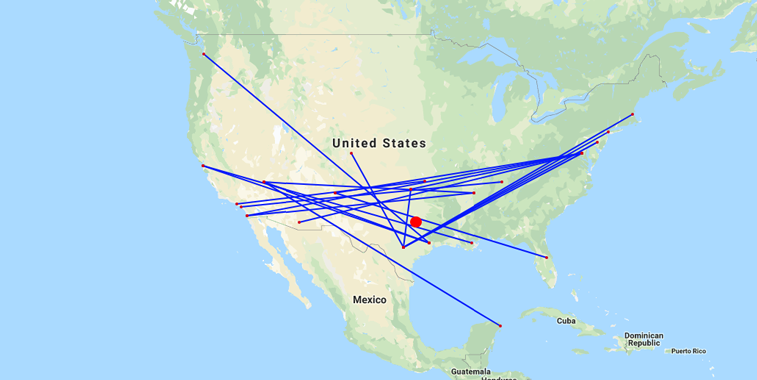 American Airlines’ top 20 city pairs via Dallas/Fort Worth (large red dot) in 2017 and geographical location of hub in relation to routes. Of the three hubs analysed in this feature, the busiest connecting route was with American between San Antonio and Washington Reagan, generating over 32,000 indirect passengers last year.