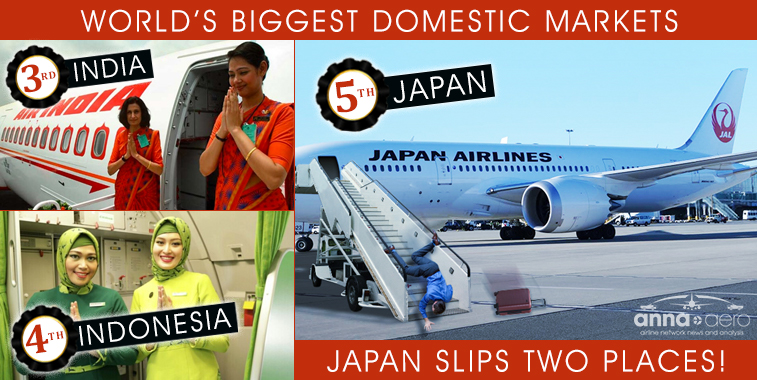 The number of available seats on worldwide scheduled domestic flights grew by 6.2% in 2018 to 3.31 billion. The US and China remains the largest domestic markets, but there have been significant changes elsewhere, with India and Indonesia both overtaking Japan in the domestic capacity table. Nepal and Bolivia are the fastest growing markets in 2018, based on an analysis of countries which supported a minimum of one million domestic seats in 2017.

There were 3.31 billion scheduled seats available on domestic flights around the globe in 2018, a 6.2% increase on the 3.12 billion flown in 2017. Up to 160 countries witnessed some form of domestic service this year, although some of these were limited and irregular. Even so, 119 countries saw more than 100,000 seats available on domestic routes, with 67 witnessing more than one million seats on internal flights. The following analysis of the largest and fastest growing domestic networks uses OAG Schedules Analyser’s definition of what constitutes a domestic service. Some links that operate between different countries, but under certain classifications are still considered domestic flights, may not qualify as domestic services here. It should also be noted that one-way seats account for all domestic seats in both directions in this analysis.

It is no surprise that the US remains the largest domestic market, accounting for 29% of all global domestic capacity in 2018. The number of seats on US services grew by 4.4% this year, increasing from 917.8 to 958.1 million. China remains in second place in the rankings but has closed the gap on the US slightly due to its stronger net capacity growth. In 2017, the US market offered 293.7 million more domestic seats than its Chinese counterpart. This difference has decreased slightly to 273.1 million seats in 2018. In total, seven of the top 15 domestic markets are located in Asia or Asia Pacific regions, while the remainder include three countries in Europe (including Turkey), two each in North America and Latin America, plus Russia, with OAG classifying half of the latter nation n Europe and half in Asia. 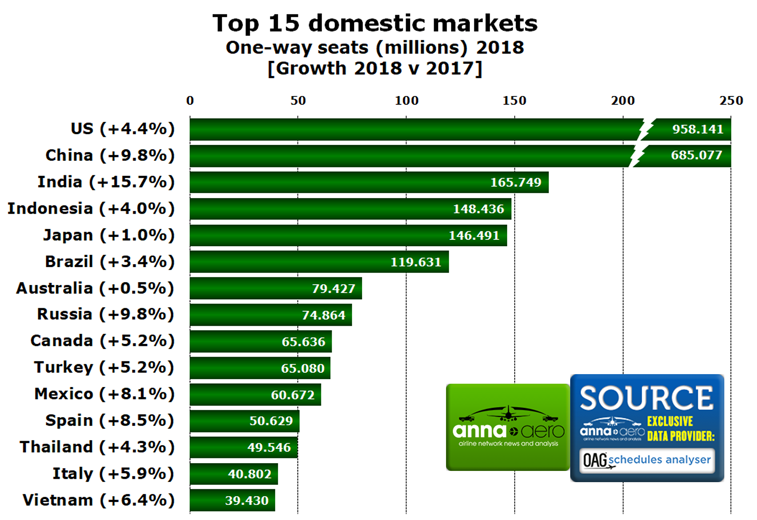 The top 15 domestic markets in 2018 consist of the same countries that made the list last year, but there has been some movement in terms of ranking positions. Most notably, Japan has slipped from third to fifth, having been overtaken by both India and Indonesia. India enjoyed the biggest percentage growth among the top-ranked domestic markets in 2018, with a 15.7% increase in seats, while Indonesia also saw a positive 4.0% jump in internal capacity. In contrast, Japanese domestic capacity witnessed the second weakest growth among the top 15, increasing by just 1.0% in 2018. The only other change in ranking positions saw Spain jump above Thailand to claim 12th position.

anna.aero often considers Turkey as a European market for analysis purposes, despite its geographical proximity to the Middle East and Asia. If Turkey is considered as a European market, it would have the largest domestic capacity on the continent, followed by Spain. The only other European country to make the top 15 is Italy, which claimed 14th position. The remaining big European markets, namely Germany, France and the UK finished in 18th, 21st and 23rd respectively. The UK was the only country among the top 30 to experience a decline in domestic capacity this year, with seat numbers dropping by 1.6% to 29.6 million in 2018. Spain saw the biggest growth among the six biggest domestic markets (including Turkey) in Europe, with an 8.5% increase in internal seats.

To establish which domestic markets grew at the fastest rates in 2018, we took a look at annual percentage capacity increases for all those countries which offered a minimum of one million internal seats in 2017. Among these countries, Nepal and Bolivia experienced the biggest increases in domestic capacity, with internal seat numbers up 40.2% and 37.8% respectively. These two countries rank 46th and 37th in terms of 2018 domestic market size. There are four airlines serving domestic routes in Nepal and three of these increased their capacity on such services this year. The biggest net increase came from Shree Airlines which added more than 370,000 domestic seats to its network in Nepal. Five of the top domestic growth markets are located in Asia or Asia Pacific, five are in Latin America, three are in Africa and two are in the Middle East, with no representation from North America or Europe in the top 15. India is the only top 15 domestic market to also feature in the top 15 for percentage growth. 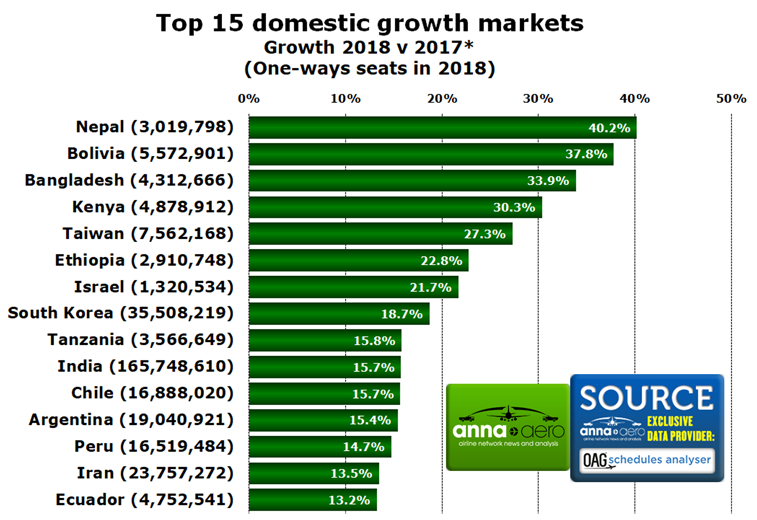 Source: OAG Schedules Analyser. *Only includes markets with a minimum of one million domestic seats in 2017.

Although other countries saw larger growth rates than those analysed here, the lower starting bases of those domestic markets means that they can have very high percentage growth figures for what in reality are fairly minor net increases in seats. Notable growth markets in 2018, which had fewer than one million seats in 2017, include Cambodia, Congo and Cameroon. These countries witnessed respective domestic capacity increases of 47.6%, 47.4% and 33.2%. Cambodia’s growth saw it break through the one million domestic seat threshold in 2018, having only had 730,000 internal seats on offer last year.

If net growth is taken into account, the country with the largest domestic capacity increase this year is China, which saw a 60.9 million expansion in domestic seats, followed by the US and India which added 40.3 million and 22.5 million respectively. The next largest net growth came in Russia, but this was a considerable way behind, with an increase of around 6.7 million domestic seats.

The world’s 15 largest domestic routes, based on one-way seats in 2018, are dominated by Asia Pacific connections. In total 13 of the 15 airport pairs are located in that region, with the remainder including one route in the Middle East and another in India. The biggest single domestic connection is between Seoul Gimpo and Jeju in South Korea. Seven airlines will offer 780 combined departures on this airport pair during the week commencing 18 December. This South Korean connection also saw the strongest percentage capacity growth among the top 15 domestic routes in 2018, with the number of available one-way seats up by 23% over the previous year. This was mainly due to an increase in capacity from LCCs including Jin Air and t’way air, which both offered more seats on this route in 2018, and Eastar Jet which began serving the sector this year. Only three of the top-ranked domestic links experienced a decline in capacity in 2018 (highlighted in red). In all three cases the drop-off was marginal, with Tokyo Haneda – Fukuoka witnessing the largest decline with a 1.4% cut in seat numbers. The biggest domestic route outside of the Asia Pacific region is the connection between Riyadh and Jeddah in Saudia Arabia. According to OAG schedules, this airport pair will be served by six airlines, offering a combined 345 departures during the week commencing 18 December. 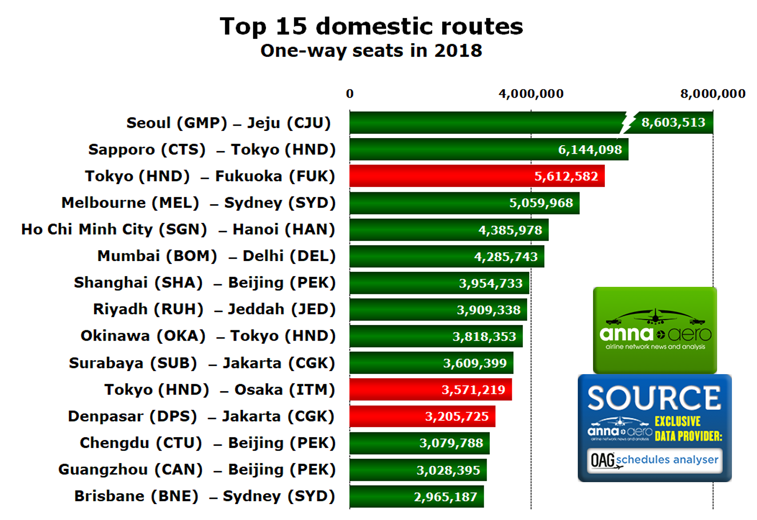 There are no North American or European airport pairs among the top 15 domestic routes. The biggest North American domestic links are those from San Francisco to Los Angeles and from Los Angeles to New York JFK, which are served by 2.48 million and 2.08 million one-way seats respectively in 2018. The largest domestic connections in Europe (including Turkey) are those from Madrid to Barcelona and from Izmir to Istanbul Atatürk, for which 1.82 million and 1.76 million one-way seats are scheduled over the course of 2018. It should be noted that many domestic routes do not have exactly the same capacity available each-way, and that the figures quoted here relate specifically to the given direction of travel.

Atlanta has more scheduled seats on domestic services than any other airport around the globe in 2018. The Delta Air Lines hub will see 54.4 million departing seats on domestic flights by the end of the year, comfortably ahead of second-placed Beijing with 45.4 million. Eight of the top 15 airports for domestic capacity are located in the US. Subsequently, it is not surprising that the top four airlines for domestic seats are all US-based. These include the USB3, plus Southwest Airlines, with American Airlines topping this particular table with 214.3 million seats available on internal US flights in 2018. The highest ranked non-US carrier for domestic capacity is China Southern Airlines, which claims fifth position. 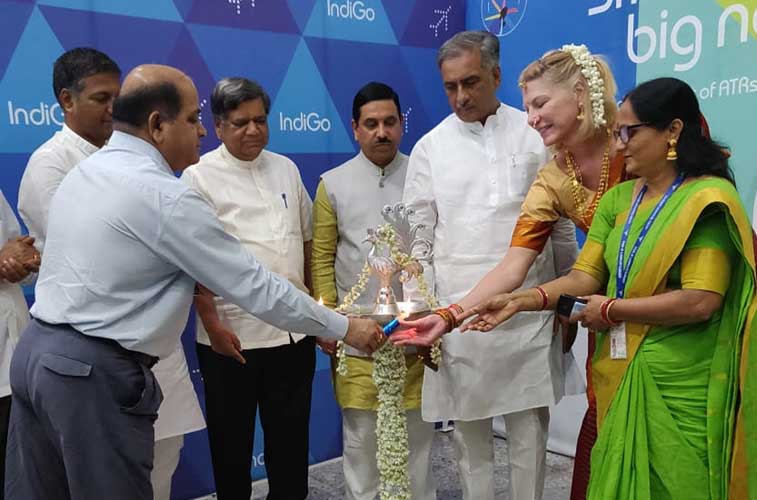 India has overtaken Japan to become the third largest domestic market in the world in 2018, based on available seats. Expansion from IndiGo played a large part in this rise. The LCC added Hubli to its network in S18, with the launch of five new connections in July. Performing the Diya lighting ceremony to mark the route launches was Cindy Szadokierski, VP of Airport Operations, IndiGo, (second right) who was accompanied by her team.