Ryanair passenger numbers set to grow by 26% from Seville in 2018; 53 routes scheduled to be flown in S19; Budapest next to be added 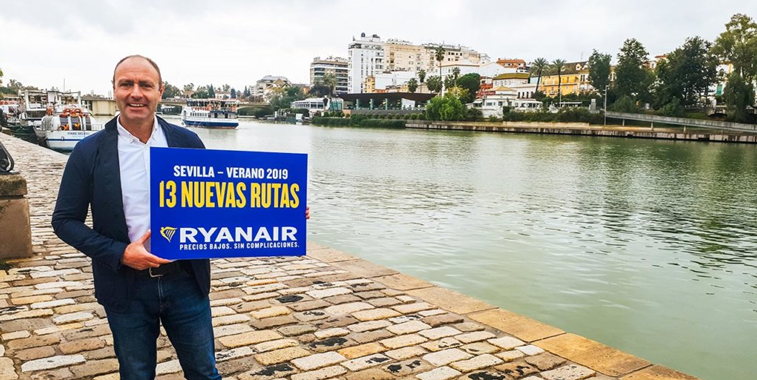 Ryanair recently confirmed that it will offer 13 new routes from Seville in S19, 12 of which were inaugurated at the start of the W18/19 season and will be flown for the first time during a summer season. In total, Ryanair is presently scheduled to offer 53 routes from Seville next summer, with the next new route to launch being Budapest in May. When referencing the airline’s booking engine, flights to Rome Ciampino will end on 31 March 2019.

Ryanair opened a base in Seville at the start of W10/11, initially with two aircraft, serving 29 routes from the airport that season. The airline’s first operations from the Spanish city commenced in February 2005, initially with three routes from Liverpool, London Stansted and Milan Bergamo. It grew its route count from the airport between 2005 and 2010 to 18 before confirming its intentions to base aircraft at the airport in the latter year. During 2010, the airline surpassed the one million passenger mark from the airport for the first time, while having operated a base for its first full-year during 2011, passenger numbers soared to over two million. However, it would appear that following the 102% growth in passenger numbers during 2011, the airline cut back on its services to Seville, with passenger numbers falling by 13% and 21% during the following two years, as shown in the graph below. 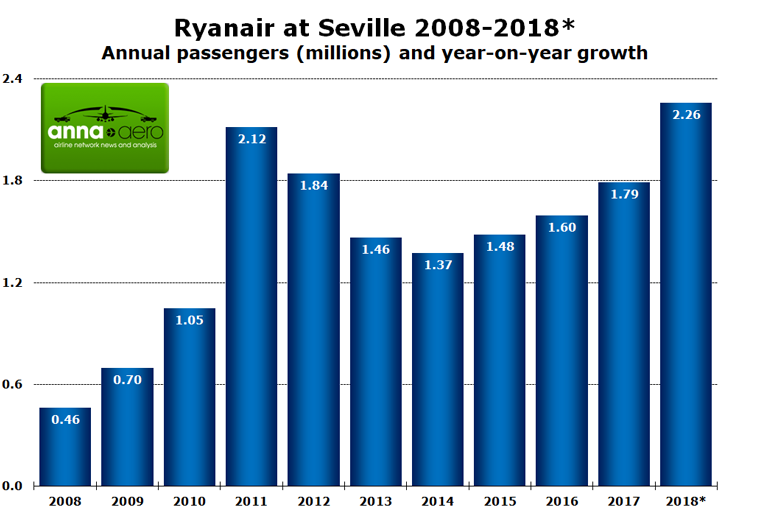 When referencing OAG Schedules Analyser data, in 2011 the airline cut eight routes from Seville, namely to Ancona, Bristol, East Midlands, Fez, Liverpool, Girona, Reus and Stockholm Skavsta. It should be noted that the airline was also operating flights to Venice Marco Polo during S11, however these flights were only in replacement for Venice Treviso which was closed due to runway works that summer. The following year also saw the airline chopping services to Alicante and Cagliari. As can be seen above, the airline has returned to growth following the three years of downturn between the end of 2011 and 2014, with the number of routes operating also increasing (more detail below).

Ryanair in 2017 was the largest operator at Seville, with it responsible for carrying just over 35% of the airport’s 5.09 million passengers last year. The airport’s second largest operator is Vueling, with the IAG LCC transporting just under 32% of Seville passengers. It operated 15 routes from Seville in S18, while from next year it will add a new service to Asturias, increasing its route count to 16, as it is not planning to cut any of its current services.

During the first 11 months of 2018, Seville handled 5.82 million passengers, of which just over 2.20 million flew Ryanair, representing a 38% share of the market, up three percentage points on the total market share outcome for 2017. Vueling transported 1.71 million of Seville’s passengers during the 11-month period between January and November, accounting for 29% of passengers, down three percentage points on its result of all passengers last year. While Ryanair has advanced its total market share of all passengers from Seville, it’s still far behind Vueling in the Spanish domestic market. The latter airline flew 51% of the 2.91 million domestic passengers that flew from Seville in the first 11 months of 2018, while Ryanair accounted for only 25%. Overall, around 33% of Ryanair’s Seville passengers flew to/from the city between January and November on domestic services, with Spanish links accounting for 12 of the 53 routes flown from the airport at present.

23 routes dropped since base opening, however 11 have returned

The relationship that Ryanair and Seville has appears to be the perfect love/hate story between an airline and an airport. Since the carrier opened its Seville base in W10/11, the carrier has pulled 23 routes from the airport, however of these 23, 11 have since restarted, namely: Alicante; Bari; Bristol; Cagliari; East Midlands; Fez; Ibiza; Malta; Rome Ciampino; Valencia; and Venice Treviso. The airline appears to have been working well with the airport during the past 24 months, with the last route dropping from Seville taking place in October 2016, when flights to London Gatwick ended. The following table gives an in-depth review of the routes that have been opened and closed since Ryanair inaugurated its Seville base in November 2010.

As can be seen in the table above, Ryanair has majorly advanced its portfolio of routes from Seville during 2017 and 2018, with a total of 33 routes being added from the base since 26 March 2017. This means that the number of routes flown by the airline from the city during the past two years has grown by 174%, increasing from 20 to 53. For 2019, Ryanair will open flights between Seville and Budapest, a route that is scheduled to begin on 2 May, however services to Rome Ciampino look poised to end on 31 March, meaning that the route count for next summer at the moment will be 53 once Budapest launches. It should be noted that Ryanair does operate a summer seasonal service between Seville and Rome Fiumicino. When referencing a recent press release sent out by Ryanair, the airline stated that it will carry 2.8 million passengers from Seville in 2019. The airline’s top routes from the airport are Barcelona, London Stansted, Milan Bergamo, Brussels Charleroi and Rome Fiumicino, with these five routes being the only ones to be flown with at least one daily frequency this winter. 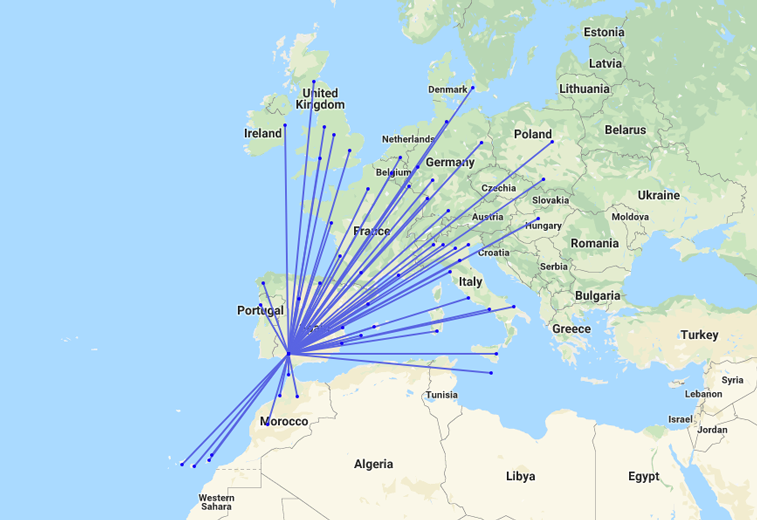 Ryanair will offer 54 routes from Seville in S19, with the next route launch poised to take place on 2 May, with that being to Budapest. In 2018, the airline will have carried around 2.26 million passengers from Seville.