Fukuoka Airport’s international traffic triples during past decade; 23.98 million passengers in 2017; AirAsia X and Thai Lion Air to serve in 2019 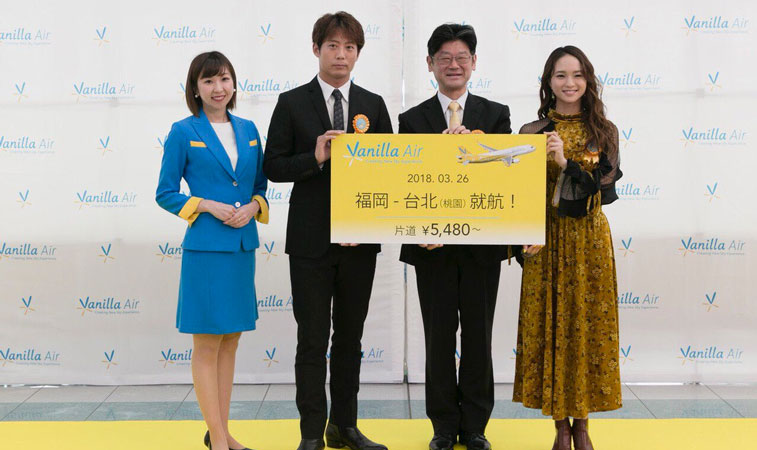 Vanilla Air launched flights between Fukuoka and Taipei Taoyuan on 26 March last year. Pictured at the inauguration ceremony among the crew and performers were Kuroki Keiko, member of Japanese band Exile The Second, and Katsuya Goto, Senior EVP, Vanilla Air. International traffic from Fukuoka has tripled during the past decade, growing from 2.04 million passengers in 2008 to 6.33 million in 2017. Overall the airport handled just under 23.98 million passengers in 2017.

Fukuoka Airport is the fourth largest in Japan after Tokyo’s Haneda (85.30 million passengers in 2017) and Narita (38.63 million), plus Osaka Kansai (27.89 million), with it transporting just under 23.80 million passengers in 2017. The airport serves the city of the same name, with Fukuoka having a metro area population of 5.6 million people, making it the fourth largest metropolitan area in Japan. Situated on the Japanese island of Kyushu, Fukuoka and the surrounding region had a total GDP of ¥51 trillion in 2017, equivalent to £376 billion or €416 billion. This means that the region has a larger GDP than the nations of Iran and Thailand according to Port of Hakata’s official website, which also states that Fukuoka Airport was responsible for 9.9% of Kyushu’s total trade value in 2017.

In 2017, Fukuoka Airport handled just under 23.80 million passengers, up 7.4% versus the 22.32 million that it processed in 2016. Following the 2008 financial crisis, Fukuoka was no exception to the downturn in air travel, with passenger numbers falling at an average rate of -2.0% between 2008 and 2011. However, while overall passenger numbers fell during this period, the international market continued to grow, going from 2.04 million international passengers in 2008 to 2.55 million in 2011, resulting in an average growth rate during this period of 7.8%. This compares to the -3.5% year-on-year average that was recorded by domestic traffic within the same time frame. 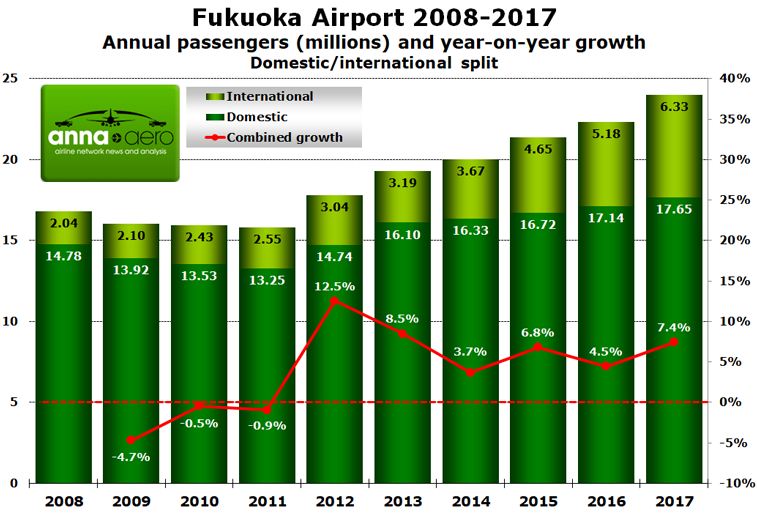 Since 2008, the number of international passengers travelling via Fukuoka has grown by 210%, with 6.33 million non-domestic travellers flying to/from the airport in 2017. The greatest growth has come within the last five years, with numbers doubling since 2013, while from 2014 to 2017 the average year-on-year growth rate for international traffic has been 19%. This compares to an average yearly growth rate of 2.3% in the domestic market for the same period, albeit from a much larger base. While there is no available statistics for 2018 for Fukuoka Airport, based on OAG Schedules Analyser data, the airport reported a 1.7% increase in capacity last year, comparing to a 2.9% growth rate in 2017 and 2.4% in 2016, suggesting that passenger numbers may not have grown as consistently as they have during previous years. However, while overall seat growth is not as strong, the international market continues to rise, with OAG indicating that international seat capacity from Fukuoka grew by 8.4% in 2018.

Fukuoka Airport’s leading route is to Tokyo Haneda, with this 879-kilometre sector accounting for over 36% of the airport’s total seat capacity in 2018. There are four airlines which operate between the two airports (w/c 2 January 2019), namely Japan Airlines (17 daily flights), All Nippon Airways (17 daily flights), Skymark Airlines (up to 12 daily flights) and StarFlyer (eight daily). It should be noted that in 2018, this airport pair was the third largest domestic route in the world, and second largest in Japan after the link between Tokyo Haneda and Sapporo Chitose, as confirmed by anna.aero. 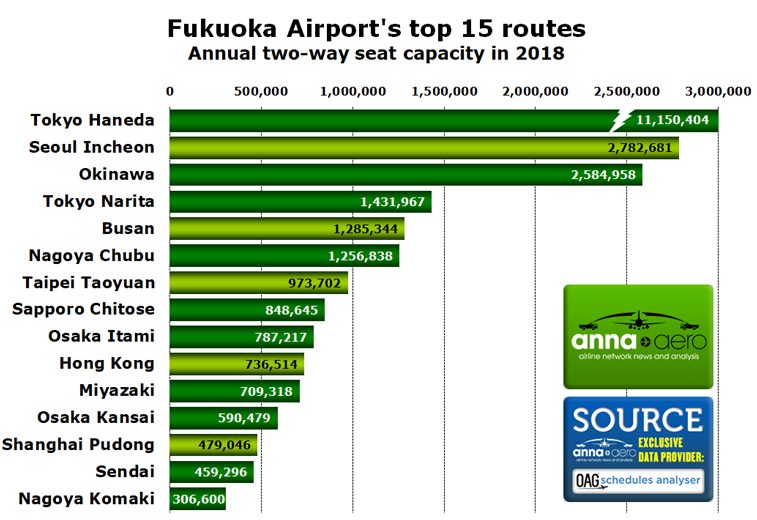 The development of the international market from Fukuoka is clearly evident in the graphic above, with five of the top 15 destinations (highlighted in light green) being airports outside of Japan. The leading international market is Seoul Incheon, with 2.78 million two-way seats being offered between Fukuoka and the South Korean hub in 2018. Seat capacity on the latter route rose by 6.9% in 2018, helped by Air Seoul beginning services between the two airports on 27 August. Another international route which saw a new entrant in 2018 was Taipei Taoyuan (seventh biggest route overall), with Vanilla Air beginning flights on the link on 26 March. Overall, 19 international routes were flown from Fukuoka in 2018, the same number flown in 2017. The airport’s longest international service is a 7,586-kilometre sector to Helsinki, a summer seasonal route flown by Finnair. OAG Traffic Analyser data reveals that the leading connections for Finnair passengers from Fukuoka via Helsinki in 2017 were London Heathrow, Rome Fiumicino and Milan Malpensa.

The airport’s largest operator is All Nippon Airways, with the Star Alliance member accounting for 28% of Fukuoka’s overall capacity last year, down from a market share of 30% in 2017. The reason for the fall in market share is due to the airline cutting capacity from the airport by -5.0% last year based on OAG schedules. Along with All Nippon Airways, a further three airlines (all highlighted in red) within the airport’s top 12 rankings cut capacity from Fukuoka in 2018. 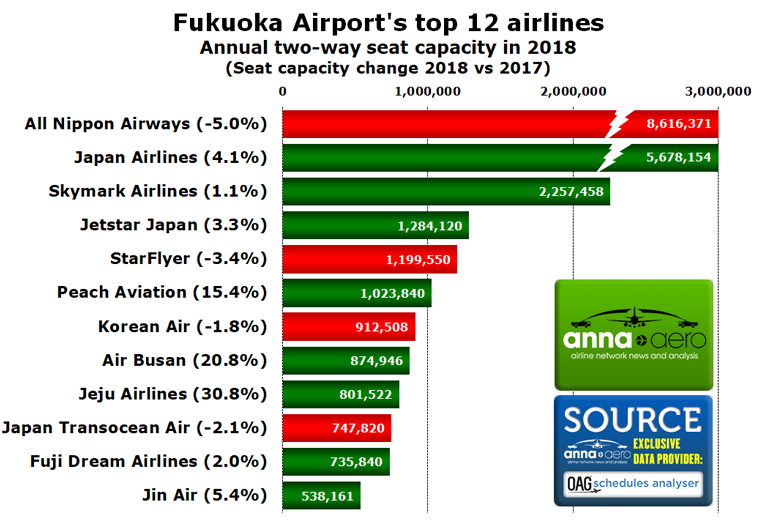 The airline within the top 12 to have grown the most from Fukuoka in 2018 was Jeju Airlines, which grew its seat capacity from the airport last year by close to 31%, a result of the carrier launching a seasonal service from Jeju last year, complementing its existing services to Seoul Incheon and Busan. Another airline in the top 12 showing double-digit growth last year was Air Busan, with it growing seat capacity from Fukuoka in 2018 by 21%. Since the start of 2017, only one airline has cut services from Fukuoka, with Juneyao Airlines having ended its daily service from Shanghai Pudong in March 2017.

The international market looks set to expand further in 2019, with two airlines already confirming that they will serve Fukuoka this year. Firstly, Thai Lion Air is poised to begin a daily service from Bangkok Don Mueang from 16 February, with the airline’s booking engine suggesting that the route will be flown using 737 MAX 9s, although the official aircraft type has not yet been loaded into scheduling data. The second new international carrier beginning flights to Fukuoka in 2019 is AirAsia X, which from 28 February will launch a four times weekly A330-300 service from Kuala Lumpur. Both routes being launched by Thai Lion Air and AirAsia X are currently unserved from Fukuoka, however Bangkok is connected to Fukuoka by Thai Airways which provides a daily rotation from Suvarnabhumi Airport. 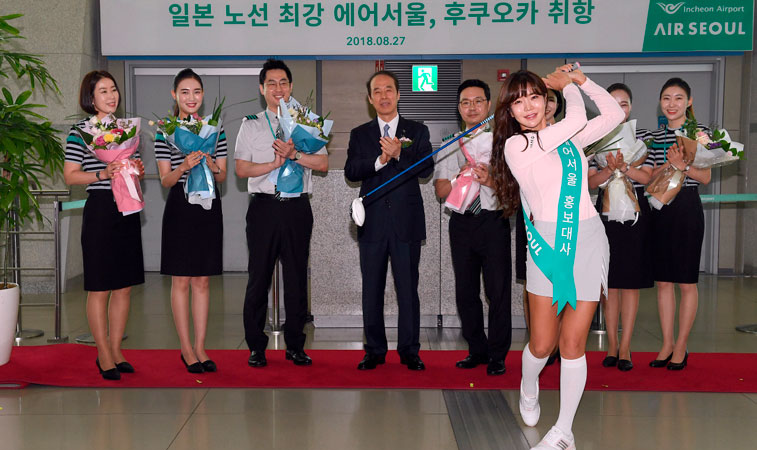 Air Seoul launched flights to Fukuoka on 27 August. Seen showing off her golfing skills to the media, inaugural flight crew and VIPs, is Shin-Ae Ahn, Professional Golfer and Ambassador for Air Seoul. Along with Air Seoul, another new operator to Fukuoka in 2018 was Vanilla Air, while Thai Lion Air and AirAsia X are new carriers confirmed for 2019.