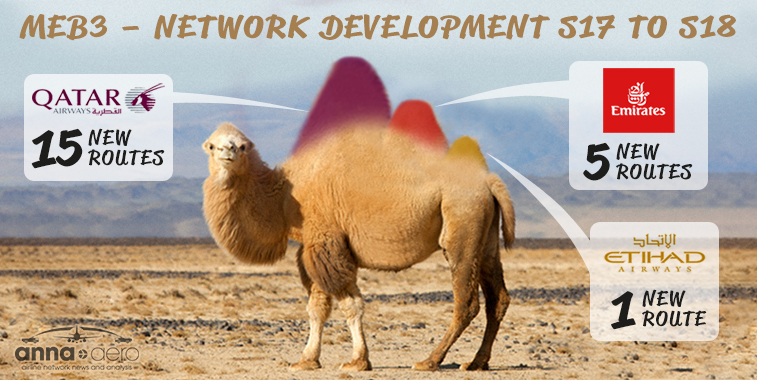 A review of the MEB3 carrier’s home hub networks for S18 shows that Qatar Airways added the most new direct routes since S17 with 15, followed by Emirates with five new connections and Etihad Airways with one. Etihad actually saw a net decline in direct destinations from Abu Dhabi from peak S17 to peak S18 since it dropped six routes. Read on to find out who operated the most weekly departures and which airline had the most direct destinations in S18.

It has been a little over a year since anna.aero last compared the networks of Emirates, Etihad Airways and Qatar Airways (the Middle East Big 3 or MEB3 carriers). We thought we would begin the new year by taking a look at how these three carriers developed their destination maps from their respective home hubs of Dubai, Abu Dhabi and Doha in 2018. The following analysis compares schedule data for a typical peak week in August 2018 to the equivalent period in the previous year, to help identify which of these long-haul leaders added the most new connections over the 12 month period.

The following table summarises the new direct destinations operated by the MEB3 carriers from their respective hubs in peak S18, which were introduced in the 12 months since August 2017. Some of these are resumptions on routes operated in the past, such as Qatar Airways’ return to London Gatwick and Emirates re-introducing flights to Istanbul Sabiha Gökçen. Others are sectors that have been upgraded from a one-stop to a non-stop service, such as Emirates’ connection to New York Newark. The Dubai-based carrier initially introduced an indirect link to Newark via Athens in March 2017. This service still operates, but the carrier added a non-stop service to the New York airport in June 2018.

Qatar Airways added the most new routes between peak S17 and peak S18, introducing 15 new direct destinations to its Doha departure boards. These include four new links to Turkey, two to Greece and two to the UK, including Cardiff Airport’s first service by an MEB3 carrier. Emirates added five new direct connections. Of these, London Stansted was the only destination that had not been served directly in the past, or which had not been upgraded from a indirect service. Etihad’s only new route added between peak S17 and peak S18 was the link from Abu Dhabi to Baku in Azerbaijan.

Of the 134 established routes Qatar Airways operated in peak S18, it offered increased weekly capacity on 64, compared to S17. It offered exactly the same capacity on a further 33 routes compared to the previous year, and reduced capacity on 37 connections. It should be noted that, on 14 of these routes, the capacity decline since S17 was marginal, at 3.0% or less. 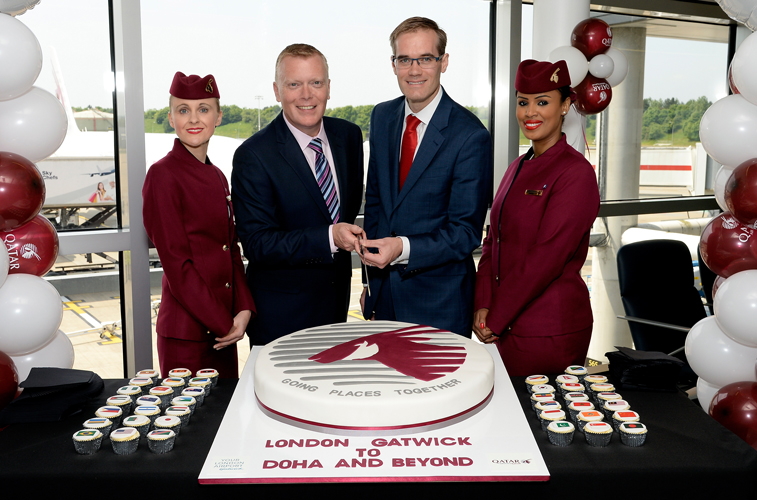 Qatar Airways returned to London Gatwick on 22 May 2018 after a seven year hiatus, with the UK airport’s COO, Chris Woodroofe (right) on hand to cut the ceremonial cake to mark the launch. The Doha-based carrier offered 149 destinations from its home hub in peak S18. It increased its weekly departures at Doha from 1,482 in S17 to 1,693 in S18. Its average weekly frequency grew from 11.1 to 11.4 over the same period.

Emirates increased weekly capacity on 66 of its established routes in S18, maintained the same number of seats on a further 33 connections, and reduced capacity on 25 airport pairs, when compared to peak S17. On 12 of the latter routes, the capacity cuts were less than 2.0%.

On the 78 established routes Etihad was still operating in S18, it increased weekly seat numbers on 35 connections, maintained the capacity status quo on 25 links and reduced seat numbers on 18 airport pairs, when compared to peak S17. On four of the latter routes the cuts were 3.0% or less.

Analysis of combined schedule data for the MEB3 carriers for all direct flights from their respective home hubs in S18 reveals that the leading country market as measured by ASKs (Available Seat Kilometres) is the US, followed by Australia and the UK. The top 10 nations remains unchanged since peak S17. Of the top 15 country markets, five are in Europe (highlighted in blue), while eight can be classified as being in Asia or the Asia Pacific (highlighted in green). The remaining two country markets are South Africa (highlighted in orange) and the US (highlighted in red). Three of the top 15 markets have seen a reduction in ASKs in the last 12 months. These were all fairly marginal, with the US seeing the most significant percentage cut in ASKs at 3.3%. The fastest-growing country markets for MEB3 ASKs from peak S17 to peak S18 were Spain (22.5%), Australia (15.7%) and Italy (14.4%). European markets saw good growth in general with the UK also witnessing an 8.3% boost in ASKs. 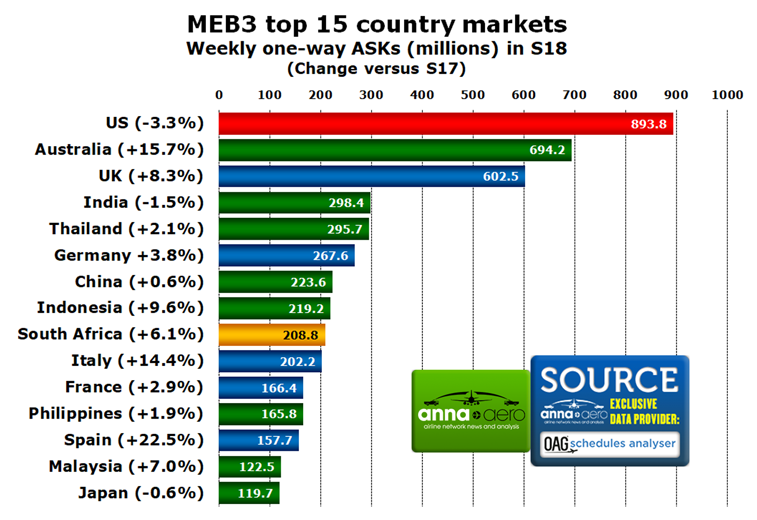 Malaysia was the only new entrant in the top 15 country markets in S18, with a 7.0% year-on-year increase in ASKs. It entered the top-ranked markets at the expense of Singapore which dropped to 16th position. In total the number of country markets served non-stop by the MEB3 airlines grew to 87 in peak S18, compared to 84 in S17. Bosina and Herzegovina and Ukraine were added to the destination board as a result of Qatar Airways introducing flights to Sarajevo and Kiev Boryspil. The third addition was Senegal, which became a direct destination with Emirates connecting Dubai to Dakar.

Since peak S18, all of the MEB3 carriers have launched additional direct routes. Qatar Airways has also announced further routes that are scheduled to begin operating in 2019. Details of these new routes are summarised below. 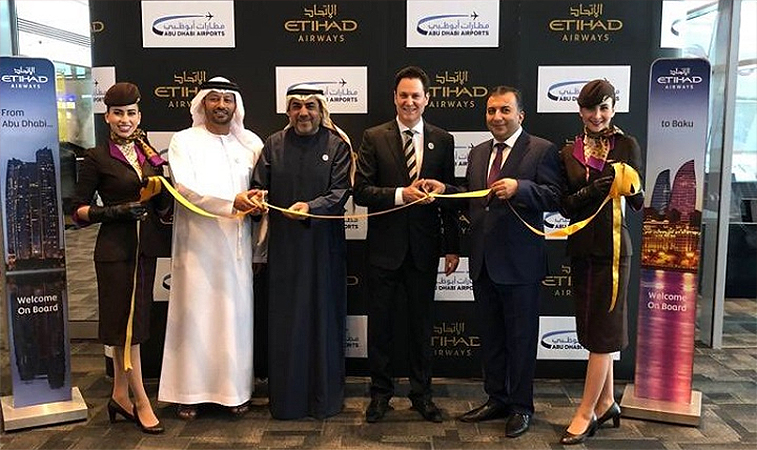 Etihad Airways commenced flights to Baku on 2 March, with the route officially being opened with a ribbon-cutting ceremony at the carrier’s Abu Dhabi hub. Among those conducting the cutting was Etihad Airways CEO Peter Baumgartner (third right). This was the only addition to Etihad’s network for peak S18, compared o the same period in S17. The carrier offered 954 weekly departures to 79 destinations from its home hub during August 2018.