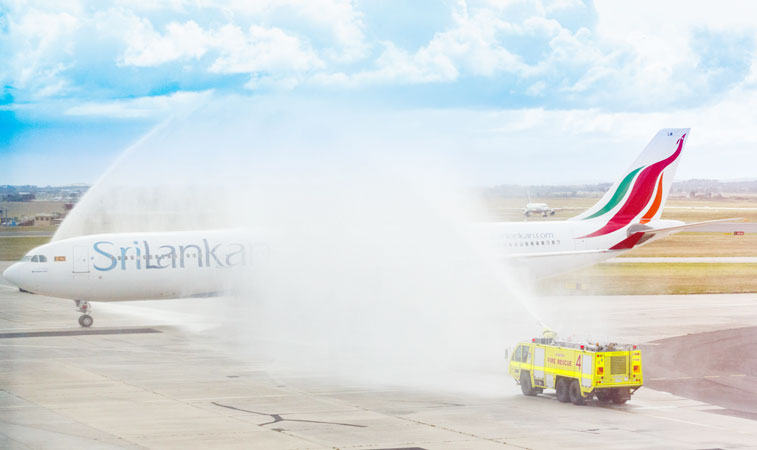 SriLankan Airlines commenced operations between Colombo and Melbourne on 29 October 2017, with the latter airport giving the inaugural flight a water arch salute. Data from the Civil Aviation Authority of Sri Lanka shows that during the first 12 months of operation, the oneworld member carried 157,342 passengers on the route. This service was also the last route that was introduced to the carrier’s network, with no new routes planned for 2019 so far either.

SriLankan Airlines is the flag carrier of Sri Lanka and a member of oneworld. It currently operates a fleet of 27 aircraft, made-up of seven A320s (of which two are neos), seven A321s (three neos), six A330-200s and seven A330-300s. It’s home base is Colombo’s Bandaranaike Airport, where in 2018 the carrier occupied 50% of seat capacity. According to data obtained from Sri Lanka’s Civil Aviation Authority (CAA), the airline flew just under 1.42 million passengers during Q3 2018, with this down 3.3% versus the 1.46 million that it flew within the same quarter of 2017. Between November 2017 and October 2018, the carrier flew just under six million passengers according to Sri Lanka’s CAA.

Chennai accounts for 10% of passengers

SriLankan Airlines’ leading route from Colombo is Chennai, with the airline having transported over half a million passengers on the route between January and October last year, accounting for 10% of the carrier’s total passengers flown within the 10-month period analysed. The airline currently serves the 647-kilometre route four times daily, using a mixture of its narrow- and wide-body fleet. India is the airline’s largest market, with it serving 13 destinations in India on either a seasonal or year-round basis during the time frame analysed, with six Indian cities placing in the airline’s top 15 destinations for passengers carried. Between January and October, 33% of the airline’s passengers flew on services to/from India. 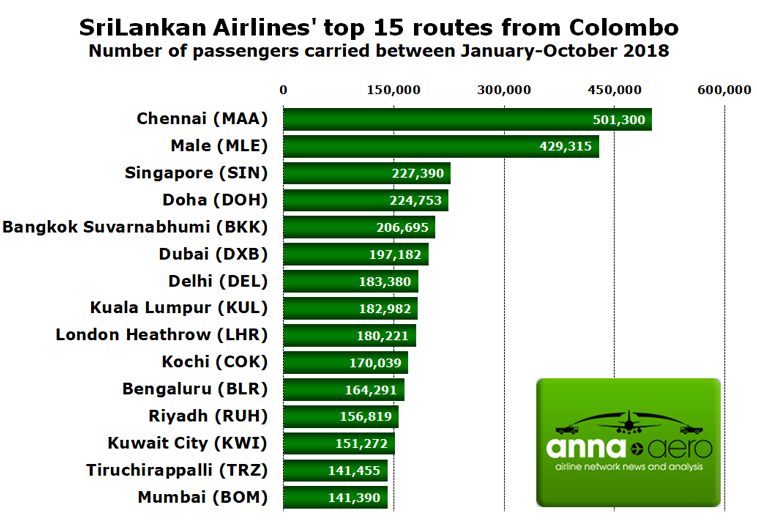 One route which just missed out on a place in the top 15 is the airline’s newest destination – Melbourne – a route that the airline launched on 29 October 2017. Placing 16th in the airline’s top routes relating to passengers carried, the link to Australia transported 129,110 passengers within the first 10 months of last year, while during its first full 12 months of operation (November 2017 – October 2018), the route carried 157,342 passengers. The airline’s other routes to carry over 100,000 passengers within a 12-month time frame (Nov 2017 – Oct 2018), were Jakarta, Guangzhou, Jeddah, Abu Dhabi, Thiruvananthapuram, Dhaka, Shanghai Pudong, Tokyo Narita, Bahrain and Beijing.

While SriLankan Airlines added its last new route in October 2017, it has since cut three routes from Colombo, namely to Hong Kong (ended 27 October 2018), Visakhapatnam (27 October) and Kunming (28 February). The loss of these routes means that in S19, the carrier is poised to offer a network of 38 destinations, with no new routes being planned or announced by the airline for this year.

Male was the leading destination for SriLankan Airlines’ connecting traffic between July 2017 and June 2018, with it accounting for 9.0% of one-way connecting passengers during this 12-month period, while Chennai was second, responsible for 7.6% of connecting traffic. With these routes being the airline’s top routes for total passenger numbers from Colombo, and having multi-daily frequencies, it is not surprising to see them top the list of connecting destinations as well. What is interesting to note is that, of the airline’s leading connections, all of them, bar Jeddah, are within a distance of 4,500 kilometres of Colombo, which anna.aero uses as the minimum sector length to determine a long-haul service. 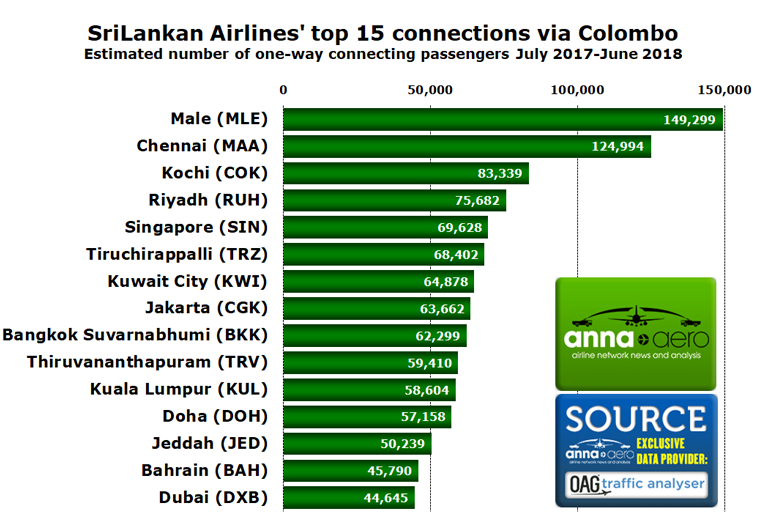 Of the airline’s top 15 routes for total passenger numbers, only Male, Chennai, Kochi, Riyadh, Singapore, Tiruchirappalli, Kuwait City, Bangkok Suvarnabhumi, Kuala Lumpur, Doha and Dubai were included in the top 15 connecting routes, with Delhi, London Heathrow, Bengaluru and Mumbai not making the connections cut. This suggests that the latter four destinations are more dominant for O&D traffic to/from Colombo then they are for connecting services via SriLankan’s hub.

During the past decade, SriLankan Airlines had a number of routes into Europe, however these we cut as a result of cost cutting measures for the airline as it re-focused its strategy in recent years. However, if it was to return to expansion in the long-haul market, OAG Traffic Analyser data indicates that strong destinations for the airline, regarding O&D traffic from Colombo, would be Paris CDG (70,000 one-way indirect passengers between July 2017 and June 2018), Frankfurt (58,100), Milan Malpensa (45,300), Rome Fiumicino (40,400) and Munich (35,900). 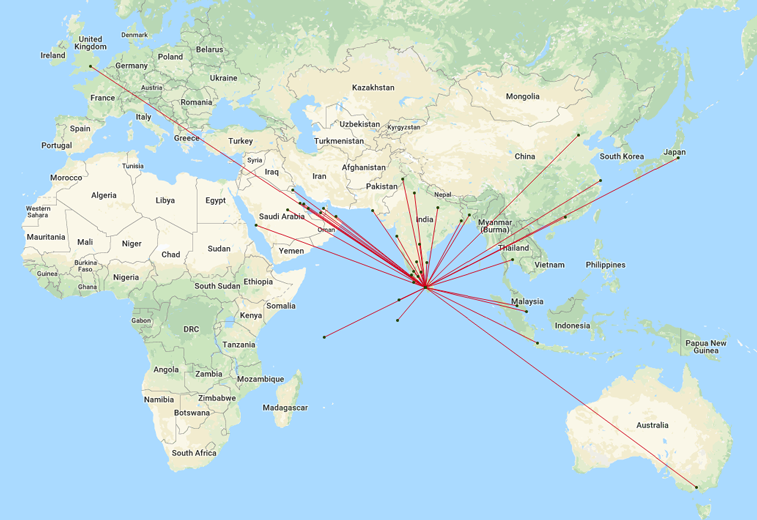 SriLankan Airlines’ route map clearly shows the importance of the Indian and Middle Eastern markets to the carrier. For 2019, the airline will offer a network of 38 destinations from Colombo, with routes to Hong Kong, Visakhapatnam and Kunming having been lost from the carrier’s route map since the start of 2018.