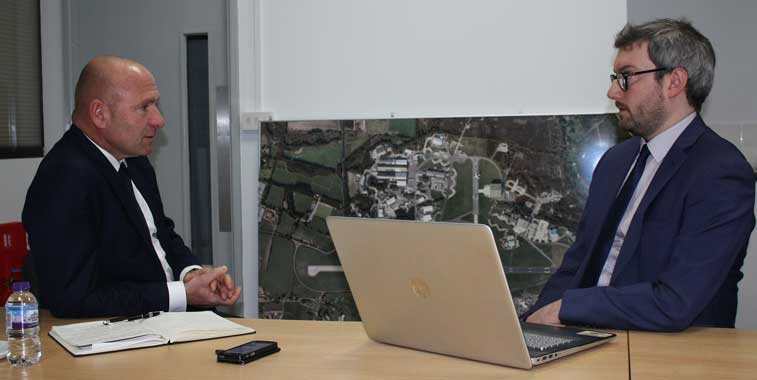 William Pearson became the new CCO at Regional & City Airports (RCA) in September 2018, having spent the majority of the previous 10 years in senior aviation development roles at both Manchester and Birmingham airports. anna.aero’s Chief Analyst met with the new CCO during a visit to Bournemouth in December, one of four airports owned by RCA.

Regional & City Airports (RCA) is part of the Rigby Group and owns the UK regional airports at Bournemouth, Coventry, Exeter and Norwich. It has management contracts to run the airports at Blackpool, City of Derry and Solent Daedalus. RCA has also established the XLR Executive Jet Centres, fixed-base operator (FBO) business, with centres currently located at Birmingham, Exeter and Liverpool. William Pearson became RCA’s new Chief Commercial Officer in September 2018 and brings a wealth of experience to the organisation, having spent most of the previous 10 years in senior aviation development roles at Manchester and Birmingham airports. anna.aero’s Chief Analyst Nick Preston met with the new CCO at Bournemouth Airport, RCA’s most recent acquisition, to discuss Pearson’s plans and how he aims to drive growth across its airport portfolio.

anna.aero: “How important are regional airports to their local economies?”

“Airports like Bournemouth and Norwich also have very large Maintenance Repair and Overhaul (MRO) and FBO operations and they’re crucial to these regions of the country in terms of the skilled labour forces and inbound investment they attract.”

aa: “Does RCA believe there will be further rationalisation in the UK regional airport landscape?”

WP: “As it stands, RCA is the largest regional airport group in the UK. We run airports in a profitable and sustainable manner. Our job is to make sure that regional airports do prevail, to make sure airport customers, both passengers and airlines, are supported properly. So, when we introduce commercial air services to our airports the most important thing we can do is make sure they’re going to be there for the long term. We don’t want a boom and bust economy, which is what we have seen at some regional airports in the past. We want a sustainable growth pattern. If the airline makes money it means they’ll continue the service and probably add additional services. Importantly the airport needs to make money as well, in order to sustain itself as a profitable entity.”

aa: “RCA currently owns and runs four UK regional airports and has management contracts for a further three. Are there any plans to make future acquisitions, either in the UK or abroad?”

WP: “If an airport fits with our model then it’s definitely something we would consider. We are an expanding business. The owned airports are very important to us, since they sustain most of the commercial airline activity that takes place across the group. Commercial passengers on commercial airlines are vital to the growth and sustainability of the business going forward. That said, some of our airports have a good balance between skilled labour bases, like MRO facilities. Certainly, here at Bournemouth that’s very prevalent, with recently invested MRO facilities. If an airport has sustainable prospects, I think that would be something we would be interested in. When we gain a critical mass of airports, sustainability becomes a little bit easier, because you can get efficiencies within the business.”

WP: “I think the airports we own have an ecosystem around them, where all the separate parts or activities make the whole. If you take Bournemouth for example, we’ve got commercial passenger activities taking place at this airport, we’ve got FBO activities, plenty of MRO facilities, we’ve got cargo facilities. There are business parks emerging in this part of the country which again are very important in terms of providing the work force and labour base. Commercial passenger activities underpin the airport and local economy. They are a very important part of the asset, but airports can and do live without them. All of the activities that take place at an airport are very important to us collectively.” 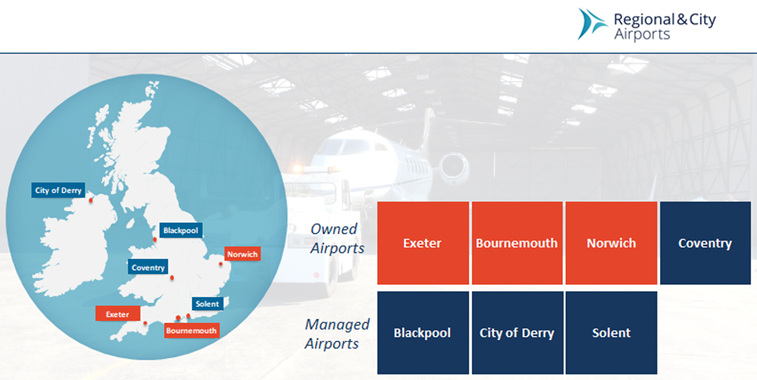 RCA owns the airports at Bournemouth, Coventry, Exeter and Norwich which are highlighted in red in the above location graphic. The group also has management contracts to run the airports at Blackpool, City of Derry and Solent Daedalus (highlighted in blue). Bournemouth, Exeter and Norwich account for the vast majority of passenger traffic among RCA’s airport portfolio.

aa: “What economies of scale do RCA’s airports benefit from? Which airport functions are centralised at group level?”

WP: “The benefit of having a group of airports is that costs are spread across multi-site locations. This makes things cheaper at the individual airport level, provided you have the right people at group level overseeing all the component parts. We already have a lot of synergies within the business. We’ve got a group CEO, a group CCO, and group finance, marketing, aviation development and commercial development functions. This structure works very well. We can also leverage our group synergies to build multi-level relationships with customers, such as airlines and commercial suppliers, across all our airports. These centralised relationships are efficient for us, but also allow airlines to see us as a larger component. The collective is greater than a single airport, and that’s important. We approach our commercial relationships with our in-terminal suppliers in the same way. We plan to expand airline relationships across the group of airports. Where one of RCA’s airports already has a relationship with an airline or commercial suppliers of catering, food and beverage and duty free etc, its better for us to have those relationships collectively, because those suppliers then see us as a more important part of their business.

“Where roles are centralised within the group, we make sure we regularly visit the individual airports. We have a lot of direct conversations with the individual MDs at those airports so that they are very aware of what we are trying to do. They then provide feedback from the regions in which the airports are located.”

aa: “Does RCA have plans to expand it XLR Jet Centres across other airports?”

WP: “Yes, we’re always looking to expand that business. It’s a successful part of our operation with centres at our own airport in Exeter, but also at third party airports in Birmingham and Liverpool. Where the XLR Jet Centres are in third-party locations, they are an important part of that airport’s business. It’s a prestigious part of the business but it’s also a necessity for airports to have a strong and successful FBO in situ. We’re always looking for opportunities for future growth for the XLR product and that can be at additional third-party airports as well as those we own and run.”

aa: “Does RCA have plans to bring any airport services (fuelling, handling etc) in-house across its airports?”

WP: “Small regional airports are about sustainable business and about making sure that we’re there for the long term. We also need to make sure that we deliver the service and the customer experience that passengers need and deserve when they are choosing to use one of the smaller airports rather than travelling some distance to go to a larger airport. It’s about making sure there are no long queues for passengers at check-in or at any other part of their journey, and that they have a great experience when using any of our facilities. This doesn’t only apply to passengers but to the airlines themselves. When airlines are receiving services like catering or fuelling etc, we need them to know that we are going to do everything within our power to make sure that aircraft gets away on time with the service level that they’re expecting and deserve. This approach is essential to ensure that customers continue to use our airports and that we become the airport of choice for those passengers and subsequently encourage further airlines to use our airports.

“We already plan to bring handling in-house at Bournemouth from 1 April 2019. We’ve got experience of how to do it. We already have a handling business at two of our other airports that has all the knowledge base we need in terms of procurement, operational best practices, contracting etc. It makes commercial sense to bring handling in-house at Bournemouth, but it also makes customer service sense. We want customers to have a great experience enjoying the facilities we’ve got here.

“We also recognise the importance of having well-known brands, particularly within the terminal. We have recently developed a new agreement with TRG Concessions where we’ve got brands that people know and recognise coming in like Costa Coffee and the Navigation pubs which will be in place at Bournemouth and Norwich from spring 2019. This means our passengers have got facilities from which they know exactly what to expect, what the options are, and that’s important for a customer. Having a collective group of airports allows us to grow relationships with suppliers that, ordinarily, if we were on our own, they may not be interested in providing.”

aa: “How much potential is there to develop new air routes across the RCA airport portfolio?”

WP: “The airports that we own are all in attractive locations in the southern half of the UK. The reason I joined RCA is because I believe there is a great opportunity to develop these airports. They have plenty of runway capability right now. We don’t necessarily need to build new runways to continue to develop the UK passenger infrastructure. We’ve done our homework on where we think the opportunities lie for our businesses and our airports. We know where customers want to travel to and from and we’re already putting a huge amount of effort into that. My ambition is to make sure that passengers can have the connectivity that they want and are asking for regularly, available from their local airport. We’ve got a strong passenger base and a strong demand case, and we are going to represent that to the airlines.

“I think the most important thing I want to get across is that we’ve got the ambitions to really develop these airports. We know there are significant numbers of passengers living in the regions that these airports serve and our aim is to make sure that we offer the air services that those passengers want. We are now doing everything we possibly can in terms of connecting ourselves with our markets, with the airlines, with tour operators and with travel agents, as we take this business forward.” 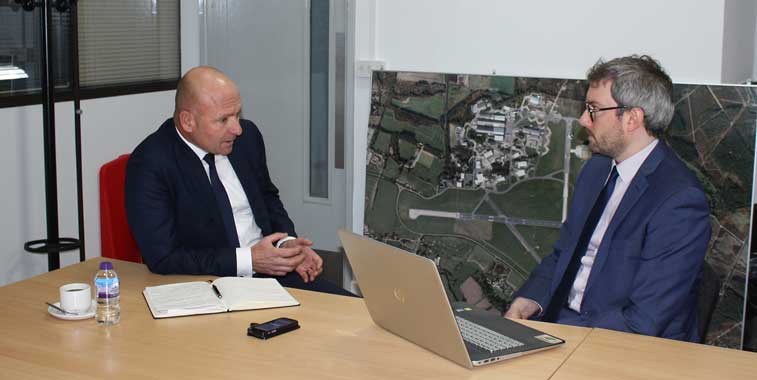 Pearson and Preston discussed RCA’s ambitions for growing passenger numbers across its airport portfolio. “The airports that we own are all in attractive locations in the southern half of the UK. The reason I joined RCA is because I believe there is a great opportunity to develop these airports.” explained Pearson.