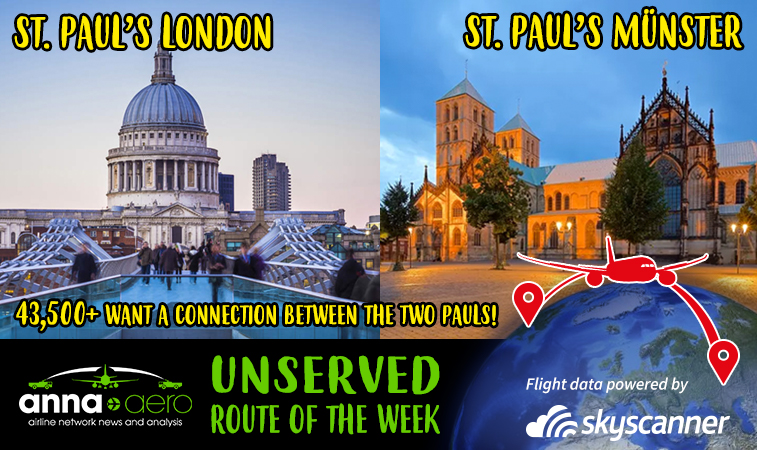 This week’s Unserved Route of the Week feature, brought to you in partnership with Skyscanner, one of the world’s leading flight search engines which has 70+ million unique visitors per month, analyses the unserved market between London and Münster/Osnabrück in Germany. Data from Skyscanner shows that during the past 12 months (January 2018 to December 2018), some 43,500+ people have searched for a direct flight between the two European cities.

Looking at the breakdown of data in more detail, it shows there to be a higher demand for the link from Germany, with the search split being 56% versus 44% in favour of the German city. Overall though, the average number of searches for this route is 3,629 per month. 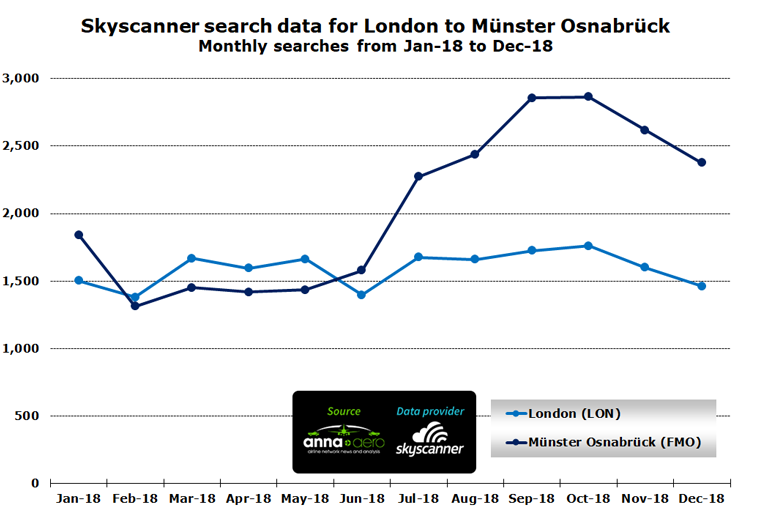 A regular scheduled service between London and Münster/Osnabrück was last flown on 3 January 2016 when Flybe, operated by Stobart Air, served a link from London Southend four times weekly using ATR 72s. During 2015, the service carried 13,761 passengers based on UK Civil Aviation Authority (CAA) data, up 24% from the numbers carried in the year before. Since 2000, services to Münster/Osnabrück from London have been flown by CityJet (operated at the time under Air France) between 2012 and 2014, while airberlin flew between the German city and London Stansted from 2002 until 2011, with it carrying over half a million passengers during its tenure on the service, hitting a high of over 72,300 annual passengers during 2006, again based on UK CAA statistics. This data is also confirmed by Münster/Osnabrück Airport. “The connection to London is a historically proven route with up to 73,000 passengers per year,” comments Mathias Richter, Manager Aviation Marketing, Münster/Osnabrück Airport. “It is a service which is supported by both business and leisure demand. London is currently the second most popular city destination for short breaks for German tourists, while according to a company survey for the business sector, there is a large number of internationally active companies in our catchment area which wish for London as a destination. These companies are mainly medium-sized and large companies within the manufacturing industry, including mechanical engineering, automotive suppliers and the food industry.”

While Münster/Osnabrück’s catchment does include a number of airports which presently have a route to London, data from OAG Traffic Analyser reveals that during the 12 months between July 2017 and June 2018, some 2,800 people still flew indirectly from the German airport to London, with over 90% of passengers using Lufthansa as their optimum carrier of choice. “Münster/Osnabrück is the closest non-UK airport without a London connection, taking into consideration airports with more than 500,000 passengers in 2017,” highlights Richter. During 2017 the airport handled 959,493 passengers, up 22% versus the 787,000 it welcomed in 2016. So while Flybe and Stobart Air’s route ended that year, demand for flights from Münster/Osnabrück saw a sharp increase. In 2018 demand grew again, with the airport now handling over one million passengers per annum.

A number of ideal carriers for the market

Looking at OAG Schedules Analyser data, there are a number of airlines based in the UK that would be ideally suited to this service. With regards to the current market between London and Germany, the leading provider of flights is British Airways. The UK flag carrier operates 36% of the 745 weekly departures that take place this winter, with it providing 115 more departures than second placed carrier Lufthansa. Currently BA’s mainline unit links London Heathrow to Berlin Tegel, Düsseldorf, Frankfurt, Hamburg, Hannover, Munich and Stuttgart, while it connects London Gatwick to Cologne Bonn, a recently launched service and, via a seasonal link, to Friedrichshafen. The carrier’s BA CityFlyer unit links London City, an airport previously connected directly with Münster/Osnabrück, to Berlin Tegel, Düsseldorf and Frankfurt, while it also links London Stansted to Berlin Tegel.

While BA is an optimum choice when it comes to connecting London with Germany, when we look at the market regarding number of destinations served, the leading airline is Ryanair, with it offering 11 routes from London Stansted to Germany. Although the airline does not operate from Münster/Osnabrück, its leading base of Stansted has proven to provide a market of close to 73,000 annual passengers from the days when airberlin used to link the airport with Münster/Osnabrück. The airline is no stranger to the latter airport though, having flown from the German facility to both Girona and Malaga between June 2013 and November 2015. With it having already established a brand presence in the region, it could be tempted to return to the market and establish a London link.

Along with BA and Ryanair, other notable airlines which could realistically look at a direct flight between the two destinations are easyJet (which will expand German operations from Gatwick next month when it launches flights to Düsseldorf), Eurowings, Flybe (re-launch from Southend) and Wizz Air which is ramping up its operations from London Luton, including more services to Western European destinations.