Yields in the bin: The Ryanair, Wizz Air, easyJet Brexit slide (according to RDC Apex data) 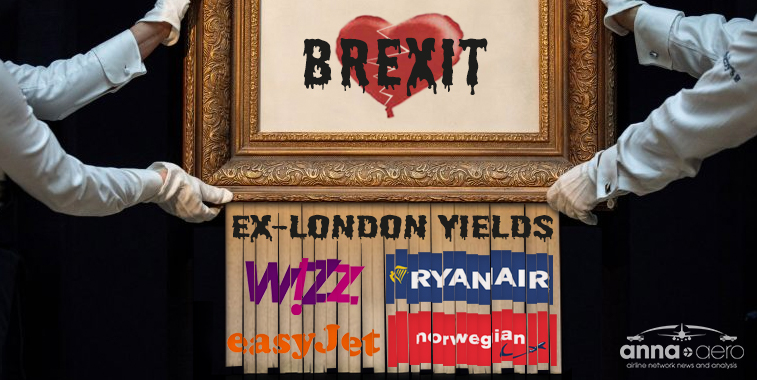 Shredded: The big London bases of easyJet and Ryanair have experienced double-digit yield drops (or near-10% for Wizz) since the 2016 Brexit leave vote. Only Norwegian improved with the anomaly of its long-haul services – although that’s tempered by its big losses from Gatwick operations. (Apologies to pro-Remain Banksy.)

anna.aero has partnered with RDC to bring you the latest in-depth aviation industry outlooks. In this first feature of the tie-up between the two companies, an evaluation of the four leading LCCs operating in London, namely Ryanair, easyJet, Wizz Air and Norwegian, has been conducted using route profitability and yield data from RDC’s Apex platform.

Collectively in 2018, these four airlines operated 474 routes from London, up from 404 in 2015, representing a net increase of 70 routes over the four-year period analysed, based on OAG schedules. easyJet operated 243 routes from London airports last year, while Ryanair operated 179 airport pairs, Wizz Air 56, and Norwegian 47, with the latter being the only airline of the four to operate from just one London airport, namely London Gatwick. Adding these numbers together, it totals 525 routes, which means that 11% of routes flown by these airlines face specific airport pair competition from each other, from London. In total, the four carriers transported 68.09 million passengers to/from London in 2018, an impressive 21% increase compared to the 56.35 million that flew with them from the capital in 2015.

In 2015, easyJet reported the greatest profit margin of all four airlines on London operations, with its profit some 71% greater than that of second placed airline, Ryanair, despite easyJet only carrying 21% more passengers than the Dublin-based airline that year from the UK capital. However, in the two years thereafter, easyJet’s profits dropped by 47% and 20% respectively, whereas Ryanair is estimated to have only encountered profit drops of 1.4% in 2016 and 14% in 2017 on London services, which resulted in it being the most profitable of the airlines at the time. However, 2018 appears to have been brighter for easyJet. While it is still reported to have encountered a 9.9% drop in profits from London in 2018, Ryanair noted a 30% decrease, its greatest during the time analysed, resulting in easyJet once again becoming the most profitable airline of the four from London. 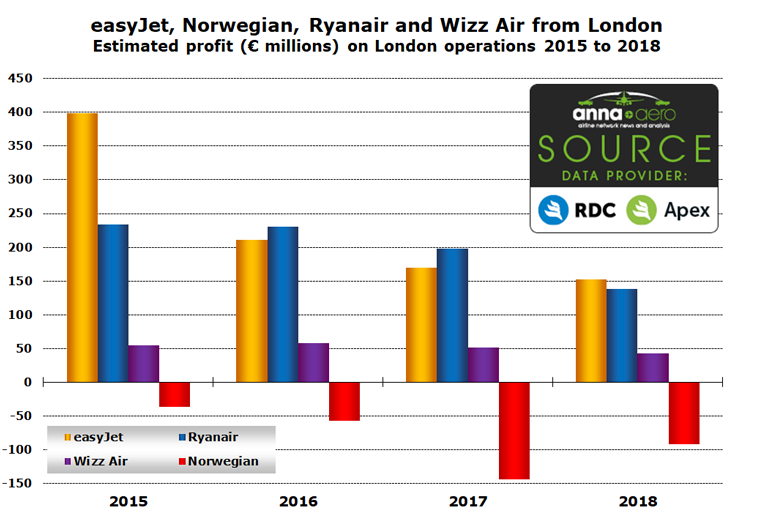 It is not surprising to see Norwegian is still in the red when it comes to its London performance, given its much-talked about loss-making operations on its long-haul services, although the outlook has got a bit better for the airline recently. While it still noted a loss of just over $92 million from its Gatwick base, it has improved by 56% when compared to the reported €144 million loss it made in 2017. This is a figure that the airline also recorded despite its operating costs increasing by a reported 49% last year as well, however the airline also increased its revenues from London by 77% in 2018.

When it comes to profit per passenger, the data reveals that Wizz Air is making the most money per customer, with it having claimed this feat since 2016 when it overtook easyJet. It would appear that easyJet’s profit per London passenger dropped by 66% between 2015 and 2018, while Wizz Air’s has fallen 50%. However, Ryanair in second place has encountered the smallest reduction, having fallen 49% over the past four years. With its losses, it is not surprising that Norwegian is fourth, however data shows that it has significantly improved on its results of 2017, suggesting that it is starting to manage its costs more effectively on its now-established long-haul services. 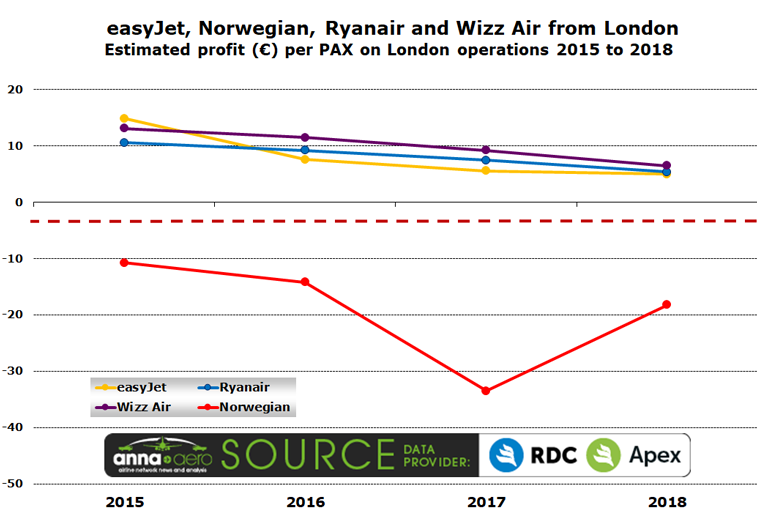 While profit per seat is a good measurement, another good understanding of the airlines’ performances from London is yield development. Interestingly between 2015 and 2018, Norwegian is the only carrier to report a marked improvement on its yields from London, growing by over 52% over the past three years, however, it is the only airline operating long-haul which has resulted in this change. When monitoring the other three airlines on their respective short-haul networks, all three have reported dips in average yield, with easyJet’s falling by 19% between 2015 and 2018, Ryanair’s by close to 18% and Wizz Air fairing much better at a 9.5% reduction over the time frame analysed, meaning that it is fairing well on its major expansion from London Luton in recent years.

To get more detail into the numbers behind this feature looking at easyJet, Norwegian, Ryanair and Wizz Air’s profitability from London between 2015 and 2018, go to RDC Aviation’s mini-site to learn more about their airline performance data. 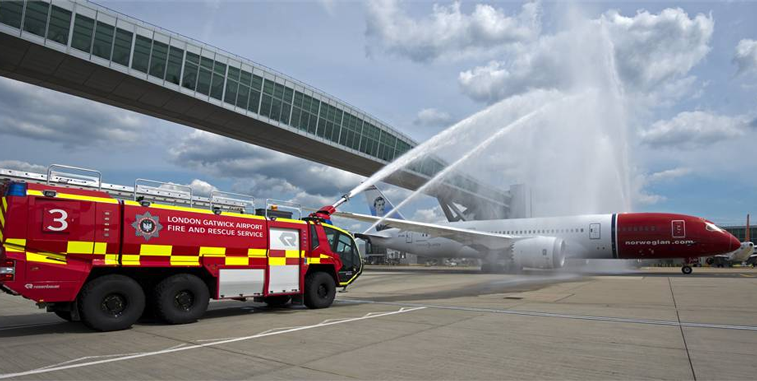 Norwegian is the only carrier to report a marked improvement on its yields from London, growing by over 52% over the past three years, however, it is the only airline operating long-haul which has resulted in this change.