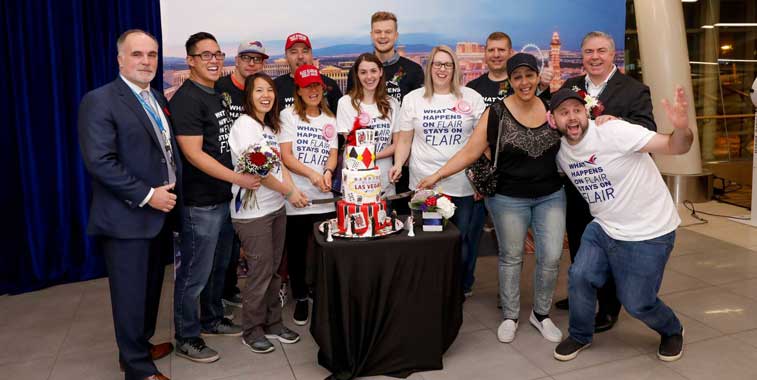 WestJet and Air Canada are the biggest operators at Edmonton but ULCCs Flair Airlines and Swoop have been responsible for much of the airport’s growth in recent times. Edmonton is Flair’s main base, with the carrier offering 14 routes from Albertan airport in 2018, including nine domestic and five international destinations. The airline’s new Las Vegas link launched in November 2018, with the celebrations including an impressive multi-tiered route launch cake.

Edmonton is the capital city of Alberta, Canada. Numerous sources identify it as the fifth largest city in the country. According to the city of Edmonton’s financial report for 2017, the Edmonton metropolitan area is home to nearly 1.3 million people. The city’s airport is the fifth largest in Canada based on available capacity and traffic figures, and describes itself as the North America’s northernmost major airport. It has two runways; 02-20 which is 11,000 feet (3,353 metres) in length, and 12-30 which is 10,200 feet (3,109 metres) long. This allows the airport to handle all sizes of aircraft without operating restrictions. anna.aero has examined Edmonton Airport’s passenger and schedule data for the past 10 years to see how traffic trends have developed since 2009.

Edmonton Airport welcomed 7.81 million total passengers in 2017, although it should be noted that this includes those travelling on private aircraft via fixed-base operators (FBOs). Since anna.aero is primarily concerned with commercial traffic, the following analysis only considers the airport’s terminal passenger growth over the past 10 years. Edmonton handled 7.38 million commercial terminal passengers in 2017, the last full year for which traffic statistics are available. This represented a 21% increase on the 6.09 million handled in 2009. From 2010 to 2014 the Albertan airport enjoyed four consecutive years of growth with passenger numbers peaking at 7.33 million in 2014, before dropping back to 7.03 million in 2016, after two straight years of decline. A 5.0% boost in traffic was experienced in 2017 and data for January to November 2018 suggests that the airport was on target to enjoy its second consecutive year of growth by the end of December. Year-on-Year comparisons for passenger numbers from January to November 2018 show that Edmonton was 6.3% up on the equivalent period in 2017. anna.aero has forecast that if the December traffic figures for 2018 grew at the same year-on-year rate as in December 2017, Edmonton should be in line to record about 7.83 million total passengers for 2018. This would represent a 6.1% increase on 2017. Even if December’s traffic was static at 2017 levels, Edmonton will have recorded total passenger numbers of about 7.79 million last year. 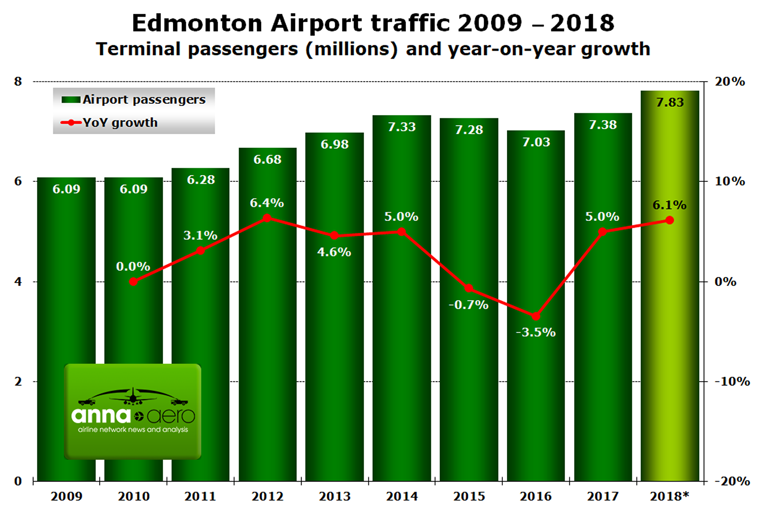 Domestic services account for the majority of passengers at Edmonton, and internal traffic has been growing at a faster rate than international journeys in recent times. From 2009 to 2017 the airport’s domestic traffic grew by 28% from 4.70 million passengers to 6.02 million. During the same period international passenger numbers declined marginally from 1.39 million to 1.35 million. The share of total terminal traffic travelling on domestic links subsequently increased from 77% to 82% from 2009 to 2017. Among the airport’s international links, traffic fell by 12.3% on trans-border links to the US from 2009 to 2017, but increased by 24% across all other international markets combined. The domestic dominance continued in 2018 with flights to Canadian destinations accounting for 82% of all traffic between January and November last year.

Edmonton saw 17 airlines provide some level of scheduled air service during 2018. WestJet and Air Canada are by far the largest carriers at the airport, accounting for 75% of all seats to and from the capital of Alberta last year. Air Canada increased its capacity by 200,000 seats in 2018, but much of the airport’s recent capacity growth has come from two ULCCs: Flair Airlines and Swoop. Edmonton is Flair’s largest base, with the carrier first offering scheduled services from the airport in early 2017. In 2018, it offered 14 routes from Edmonton, with nine domestic links and five international connections. Swoop, which is 100% owned by WestJet, only began operations in S18 and was the only new airline to join the Edmonton departures boards last year. It offered scheduled seats to five destinations, including three domestic and two international connections.

Eight of the top 12 carriers at Edmonton are Canadian-registered operators. The largest non-native airlines in 2018 were Delta Air Lines and United Airlines. The carrier offering the most seats from outside of North America was KLM. The Dutch flag carrier was the 11th biggest operator at Edmonton in 2018 based on available capacity. OAG schedules show that it will operate two flights to its Amsterdam hub during the week commencing 15 January. 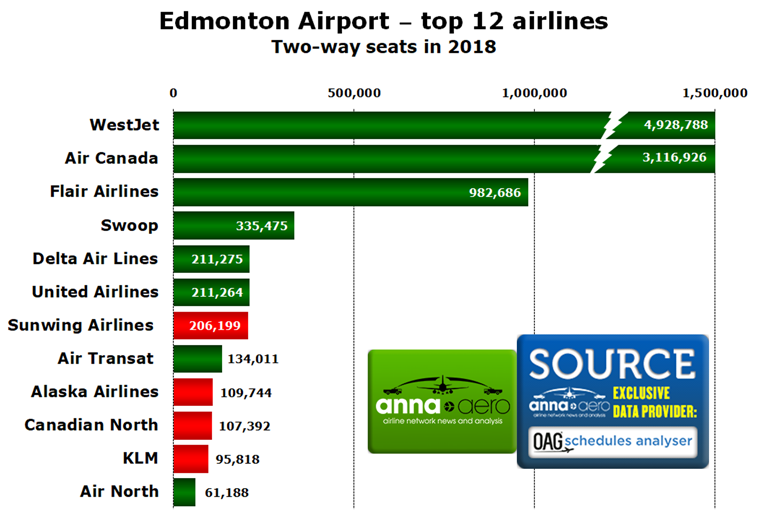 Swoop was a new entrant among Edmonton’s leading carrier’s last year and went straight in as the airport’s fourth largest operator. Where the remainder of the top 12 is concerned, seven carriers increased their capacity at the airport in 2018, when compared to 2017 (highlighted in green). The largest increase came from Flair which added a number of new routes and boosted seat numbers by a significant 465%. Four airlines cut capacity from Edmonton last year (highlighted in red). The biggest cuts came from Alaska Airlines which reduced its seat offering by 23% on flights to Seattle Tacoma, while the smallest decline was from Canadian North, which marginally dropped capacity by 0.5%.

There were scheduled services to 48 destinations from Edmonton in 2018, although several of these were limited in scope. Domestic links accounted for 23 of the airport’s scheduled connections, while destinations in the US represented 13 of the 25 international routes. Domestic services made up 11 of the top 12 routes from Edmonton in 2018. The biggest routes, based on departing capacity, were Vancouver and Toronto Pearson, which together accounted for 35% of the airport’s departing seats last year. OAG Schedules Analyser shows that three carriers will offer a combined 118 departures from Edmonton to Vancouver during the week commencing 15 January, while the Pearson sector will be flown by four carriers providing 103 weekly flights.

The only international link to feature among the top-ranked routes was Las Vegas, in 11th position. The highest ranked international connection outside of the US in 2018 was Cancún in Mexico, which finished in 19th position overall. 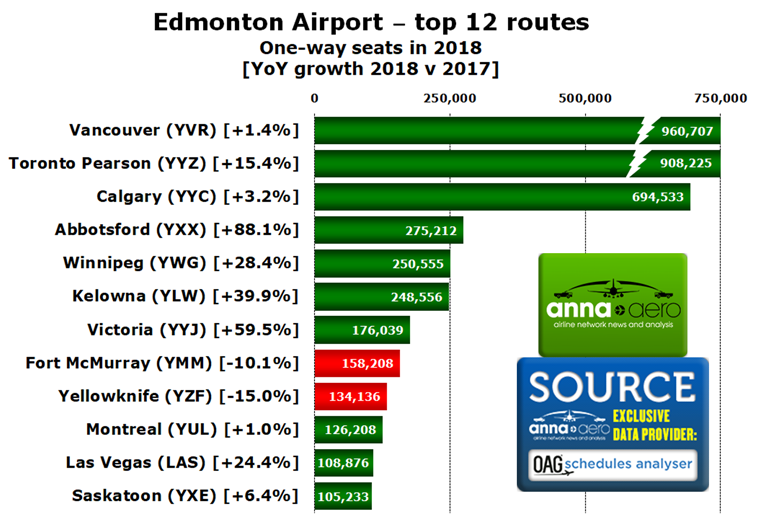 Most of Edmonton’s top-ranked routes enjoyed an increase in capacity from 2017 to 2018. The biggest increase among the top 12 came on services to Abbotsford, with seat numbers on that sector growing by 88%, due to Swoop entering the market and Flair increasing its capacity offering. Only two of the top 12 destinations experienced cuts last year (highlighted in red). The biggest decline came on the link to Yellowknife in the Northwest Territories with seat numbers down by 15%, with both First Air and WestJet removing capacity from this connection.

Eight international country markets were served from Edmonton in 2018. Unsurprisingly, the US dominates, with more than 520,000 one-way seats, accounting for 69% of all departing international capacity in 2018. The second largest market is Mexico. Only three markets were served outside of the Americas and Caribbean: the Netherlands, Iceland and the UK. The Netherlands supports the largest international link from Edmonton outside of the Americas and Caribbean region. 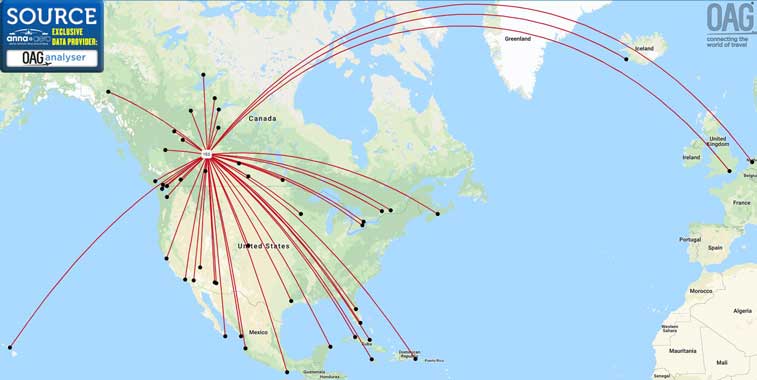 Edmonton Airport was on course to welcome to about 7.80 million passengers in 2018. This would represent a 6.1% year-on-year increase compared to 2017. Domestic services accounted for 82% of the airport’s traffic between January and November last year. Edmonton’s largest international route is to Las Vegas. It also has long-haul links to the Netherlands, Iceland and the UK.