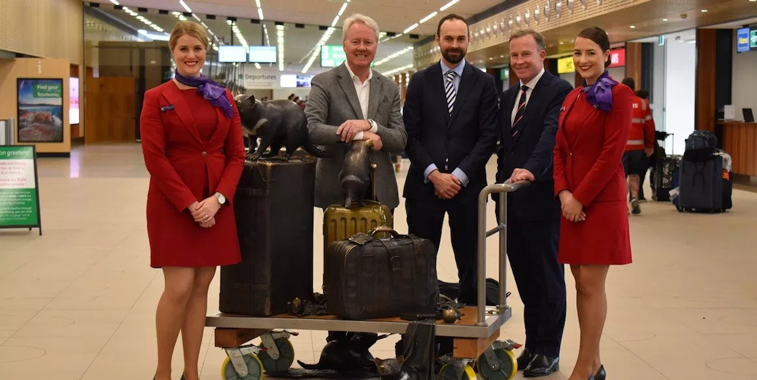 Hobart Airport is the largest airport in Tasmania, with the island’s other major airport being Launceston. The island is reliant on tourism, with visitor expenditure for the year-ending September 2018 reaching $2.41 billion AUS (€1.51 billion), up 4.0% versus the previous year according to data from Tourism Tasmania. During the same period, visitor numbers grew 1.0% to 1.3 million. With the growth rate for tourist statistics lower than the growth of expenditure, it suggests that the average spend per tourist is also on an upward trend. The business travel sector is growing at a much faster rate than vacation visitors, with statistics from the same source showing that business travel grew 16% in the 12 months analysed, with conference travel to Tasmania up by 9.0% as well. These statistics show that now is a great time for Hobart Airport to be pushing on this success.

During the period between January and October 2018 (the last available month of data), Hobart Airport handled over 2.17 million passengers, up 6.8% versus the same period of 2017. If the airport was able to maintain that result for November and December, it will mean that just under 2.68 million passengers would have travelled through the terminal in 2018. This will be the airport’s best year of growth since 2013, when passenger numbers grew by 9.0% according to statistics published by the Bureau of Infrastructure, Transport and Regional Economics (BITRE). 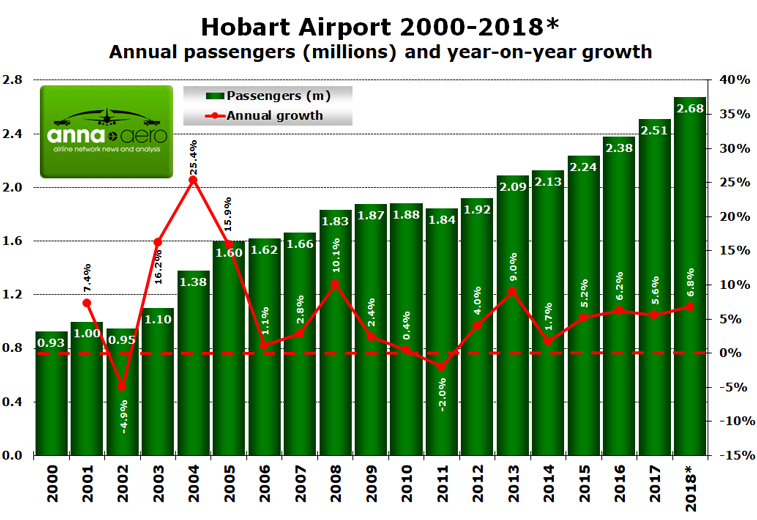 Since 2000, the have only been two years recorded where passenger numbers fell at Hobart, with the facility recording a 4.9% drop in traffic during 2002, the year following the 11 September attacks, and again in 2011 where passengers numbers fell by 2.0%. For the time frame analysed, Hobart has recorded an average year-on-year increase in traffic of 6.3%.

Hobart is a very good year-round destination for airlines when calculating the airport’s seasonality profile. When using monthly passenger data for 2017 and placing it in anna.aero’s Seasonal Variation In Demand (SVID) calculator, it performs well, generating a score of 1.70 – an “Excellent” rating.

The leading destination for Hobart is Melbourne, with all four of the airport’s serving airlines, namely Jetstar Airways, Virgin Australia Airlines, Qantas and Tigerair Australia, offering at least one daily service. Jetstar is the most dominant carrier on the route, operating 44% of the 127 weekly departures. The airline is also the leading carrier of choice for services to Sydney and Brisbane, accounting for 49% and 53% of departures respectively. 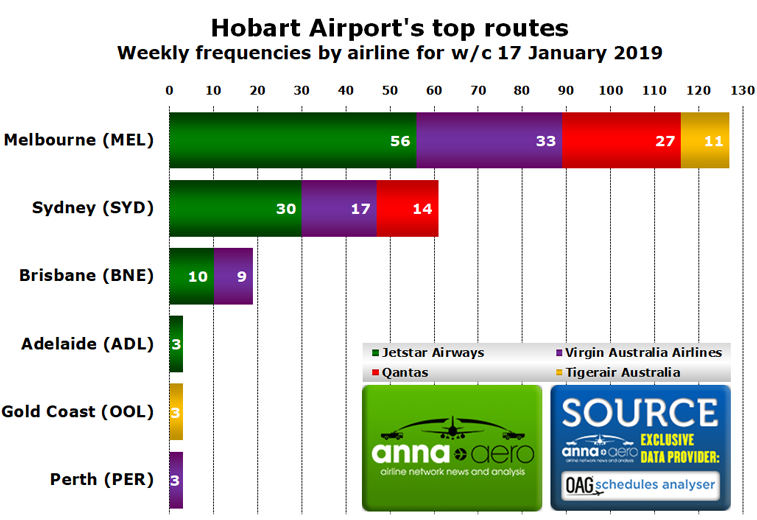 This winter, the airport’s four serving airlines are offering 216 combined weekly departures, which is only four less than the same week last year. OAG data indicates that Tigerair Australia is only offering three weekly flights to the Gold Coast this winter (summer season in the Southern Hemisphere) versus four last year, while Qantas and Jetstar Airways are both operating one or two less flights this week compared to the same period of 2018. Since last year, one new destination has appeared on Hobart’s departure boards, with Perth now being served three times weekly by Virgin Australia. However, one destination left the airport’s route map in 2018, with Jetstar Airways ending its three times weekly service to Melbourne Avalon, although at the time of the closure, the airline was offering a three times daily service from Hobart to Melbourne’s main airport. In 2017, the airport’s destination board gained two new routes, which are still operating, with Adelaide and Gold Coast services being launched courtesy of Jetstar Airways and Tigerair Australia respectively.

With the airport’s destination count having grown by one-third over the past few years, anna.aero has decided to examine which destination is most likely to be launched next. With Perth having been the last top unserved market, with around 57,000 indirect two-way travellers in 2017, a new destination is now top of the unserved list. Statistics from OAG Traffic Analyser data clearly show that there is strong demand for a non-stop service from Hobart to the nation’s capital – Canberra. Between July 2017 and June 2018, the data shows an estimated 52,900 passengers travelled indirectly between the two airports, with 84% of these travellers transiting via Melbourne, with the rest going via Sydney. It means that the average PDEW figure for Canberra is 72. The result of 52,900 annual travellers is a 9.0% increase versus the previous 12-month period, again with transit passengers 84% in favour of Melbourne.

A further breakdown of this potential city pair highlights that Qantas was the leading airline for transit passengers, taking 56% of the market, with Virgin Australia second, accounting for 41% of traffic. With these two airlines being the largest operators at Canberra, it will be interesting to see if either will look at picking up this city pair. Since Qantas only has two routes to Hobart (Sydney and Melbourne), while Virgin Australia has four (Melbourne, Sydney, Brisbane and Perth), anna.aero feels that the latter carrier would be more likely explore this new route opportunity.

Along with Canberra, it should also be noted that there are still a number of destinations which are popular but still have no direct service from Hobart, with the top five unserved markets being completed by Cairns (20,300 indirect passengers in 2017), Auckland (16,140), with the latter being the top international destination not served, Sunshine Coast (16,000) and Newcastle (14,500). 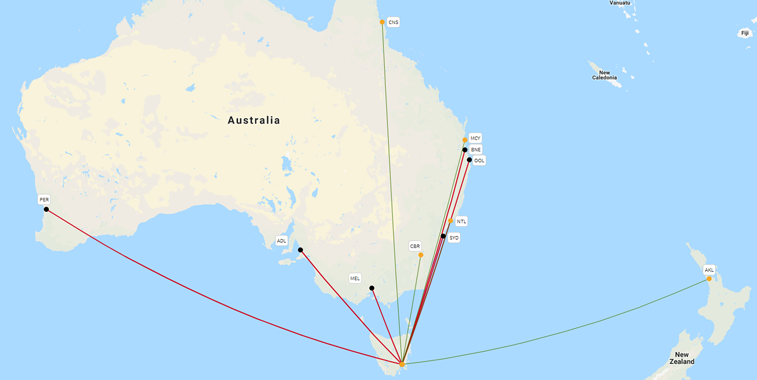 Hobart Airport currently has six non-stop destinations (highlighted in red), with the top services being Melbourne, Sydney and Brisbane. During the past two years, routes to Adelaide, Gold Coast and Perth have been added. anna.aero can confirm that the top five leading unserved markets from Hobart (shown in green) are Canberra, Cairns, Sunshine Coast, Newcastle and Auckland. Canberra is the leading unserved market, with 52,900 indirect passengers between July 2017 and June 2018, with this having grown by 9.0% versus the 12-month period from July 2016 to June 2017.