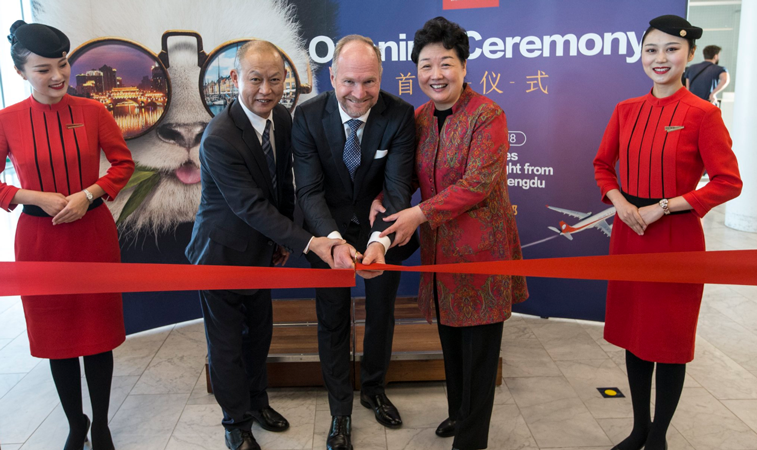 Research conducted by the European Travel Commision (ETC) highlighted that in 2017, Europe was the most popular global region for Chinese tourists to visit in 2017 after local Asian markets, with close to 12% of Chinese travellers visiting the continent. Some six million Chinese visitors travelled to Europe in 2017 according to statistics from a joint report between the China Tourism Academy and Chinese online travel agency giant Ctrip. Last year marked the 2018 EU-China Tourism Year, with a report by ETC and ForwardKeys identifying that Chinese arrivals in Europe were up 9.3% during the first four months of 2018, with May to August visitor numbers predicted to have grown by 5.3%. With the market continuing to go from strength-to-strength, anna.aero has decided to see how the airline market has adapted to these changes.

Last year was the best for seat capacity growth between Europe and China since 2011, with the market returning to double-digit growth as airlines posted a combined capacity increase of over 10%. Just over 17.72 million two-way scheduled seats were offered in the market last year, up from 15.99 million the year before, meaning 1.73 million seats were added last year, the biggest net increase during the past decade. 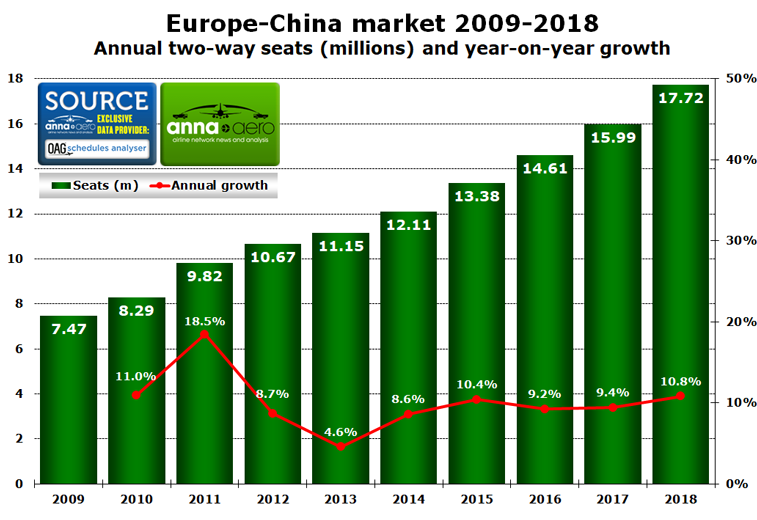 Since 2009, the market between China and Europe has grown by 137%, with only 7.47 million two-way seats having operated 10 years ago. During 2009, the market share of seats flown by Chinese airlines was 38%. In 2018, airlines based in China had grown their combined market share to 52%, with the number of Chinese airlines operating in the market increasing from four to 10, with the new entrants over the past few years having been Beijing Capital Airlines, Lucky Air, Sichuan Airlines, Shenzhen Airlines, Tianjin Airlines and Xiamen Airlines.

Air China is by far the largest airline operating between Europe and China, with the Star Alliance member accounting for 24% of all seats in the market last year, upping its market share from 22% in 2017, a result of the airline adding over 600,000 extra seats between the two regions in 2018. While Air China’s growth was the largest in terms of net seats added last year, when it comes to the fastest growing airlines based on percentage growth within the top 12, the leading carrier is Hainan Airlines, with it reporting a 27% rise in seat capacity over the last 12 months. Of the top airlines, three (highlighted in red) have cut capacity over the past year, namely Aeroflot, British Airways and SAS. Aeroflot’s cuts, and China Southern Airlines’ solid double-digit growth means that the latter airline has become the fourth largest in the market. 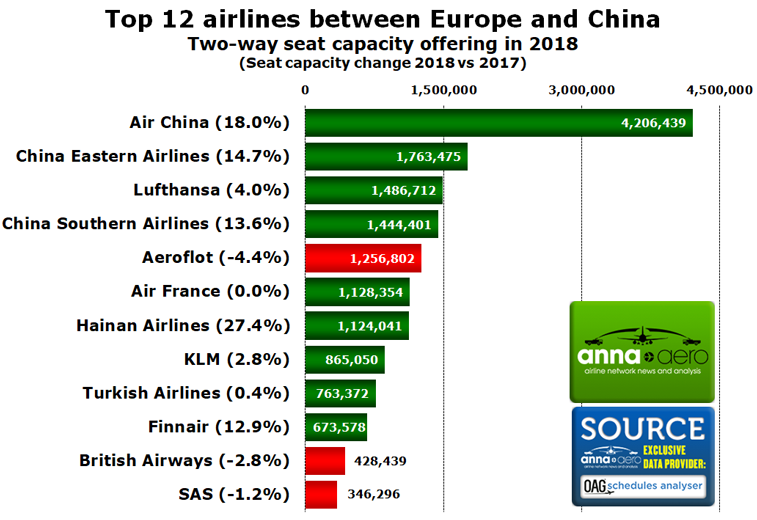 Outside of the top 12 airlines in the market, only one has reported adding over 100,000 seats to its own schedules during the past 12 months, with Beijing Capital Airlines having added 104,000 two-way seats in 2018. This means that the airline increased its capacity in the market last year by 87%, the highest of any airline flying between China and Europe. Sichuan Airlines and Tianjin Airlines also expanded in the market, growing their capacities by 44% and 68% respectively.

A total off 30 routes were launched by airlines between China and Europe in 2018. These are detailed as follows, listed in alphabetical order by airline. It should be noted that routes that launched last year, but are flown as scheduled charters (i.e not bookable on airline’s website) have been excluded.

Of the 30 routes launched in 2019, only three were introduced by European carriers, with the rest originating from China. It is also interesting to note that, of the routes launched last year, 21 were from cities that are classed as second-tier cities in China. Taking these launches into account, last year there were 128 unique airport pairs linking China and Europe, with this having grown from a total of only 36 in 2009, meaning the route count between the two regions has risen by 256% in the past 10 years.

Looking ahead to 2019, the following new routes have already been announced for launch, all to be inaugurated by Chinese carriers, with two of them poised to be new entrants to the market, namely Juneyao Airlines and Tibet Airlines. Their arrival means 12 Chinese airlines will be active in the China-Europe market in 2019. 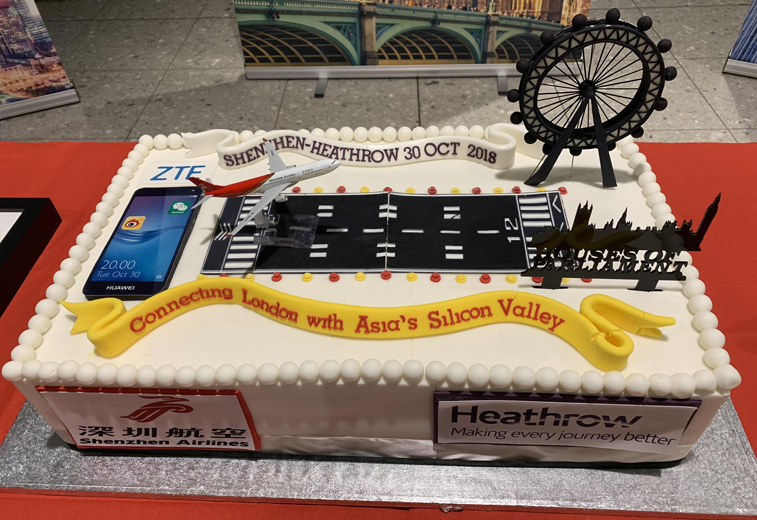 Shenzhen Airlines was a new player to the China-Europe market when it launched services from Shenzhen to London Heathrow on 30 October, with the UK hub celebrating the new service with this cake.