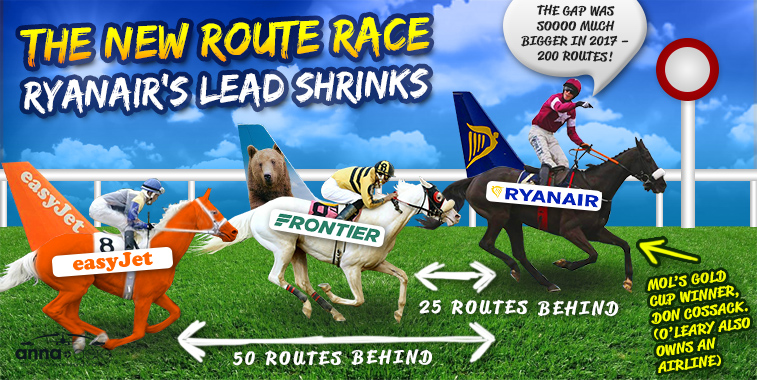 Airlines launched 3,765 new routes in 2018. Ryanair once again took the crown as the airline launched the most new services, adding 218 new connections to its network. However, its lead over the chasing pack has shrunk, with Frontier Airlines and easyJet both gaining ground. In 2017 the Irish ULCC launched 187 and 199 more new routes than Frontier and easyJet respectively. In 2018 it only introduced 26 more routes than Frontier and 51 more than easyJet.

According to anna.aero’s New Routes Database, airlines launched 3,765 new scheduled services around the globe during the calendar year 2018, representing a 6.8% increase on the previous year. Ryanair was the number one airline for new air services, while the US was the leading country market for new connections and Berlin Tegel the leading airport. It should be noted that for the purposes of this analysis, a new route is defined as a new service introduced by an individual airline, and does not necessarily mean that the airport pair in question was previously unserved. In addition, the focus of the New Routes Database is purely on scheduled flights. Although this might include some scheduled charter operations, other non-scheduled charter routes will not be included.

Ryanair remains top for new routes but competition is gaining

The top 20 airlines that launched the most new services in 2018 included 14 LCCs or ULCCs (highlighted in light green). The remainder consisted of three full-service carriers and three leisure airlines. Ryanair retained the title it held in 2017 as the number carrier for new route launches, with the Irish ULCC adding 218 airport pairs to its route map last year. It subsequently accounted for 5.8% of all new scheduled services introduced around the globe in 2018. Marrakech and Frankfurt welcomed the most new Ryanair routes with 16 and 14 services respectively. Edinburgh was another notable beneficiary of new routes from the Irish carrier, with 12 services launched from the Scottish capital last year, following a decision to transfer its based aircraft from Glasgow.

Despite continuing to top the airline rankings for most new routes, Ryanair launched 60 fewer connections in 2018 than in the previous year, while most of the chasing pack increased their respective rates of network expansion. In 2017 Ryanair launched more than twice as many connections as second-placed Eurowings, with a 153 route advantage over the German carrier. In 2018 it held a far slimmer lead of 26 routes in the new route race, over second-placed Frontier Airlines. The top five airlines for new services consist of the same LCC or ULCC carriers that made up these positions in 2017, but there has been a changes in ranking positions. Frontier Airlines and easyJet each more than doubled their number of new connections in 2018 versus 2017 and subsequently moved up to second and third in the table. Wizz Air also increased its new route count from 104 in 2017 to 133 in 2018, but dropped to fourth in the table owing to the greater growth at Frontier and easyJet, with the latter benefiting from dealings with airberlin’s aftermath. The only top five carrier, other than Ryanair, to introduce fewer new links last year versus 2017 was Eurowings, with the German operator commencing services on 88 new links in 2018, compared to 125 the previous year. It subsequently dropped from second to fifth among the top 20 airlines. 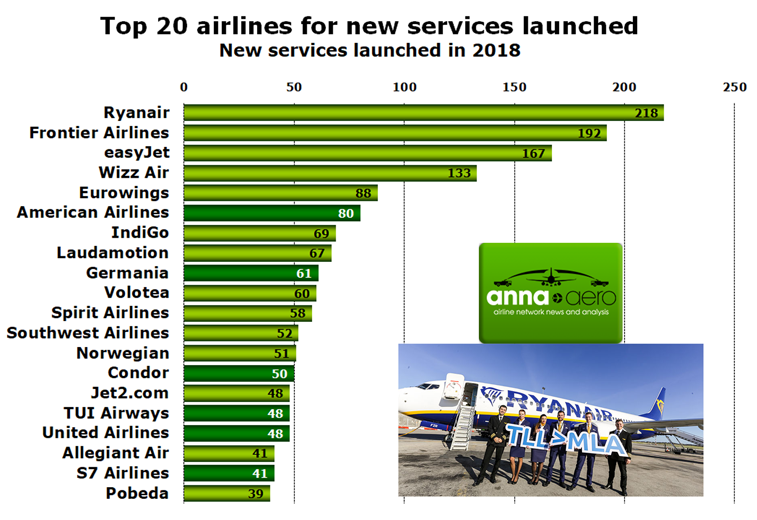 Another LCC of note among the top 20 airlines for new routes is Laudamotion, which is a new entrant, having only begun operations in June 2018 as it looked to fill the void left by the demise of its predecessor NIKI, plus airberlin. The Austrian carrier, which is majority owned by Ryanair, opened 67 new routes last year, ranking eighth overall.

The top-ranked, full-service operator for new route launches in 2018 was American Airlines, while Germania was the highest placed leisure carrier. In all, 11 of the top 20 airlines are registered in Europe, with a further six based in the US. The remaining three operators are registered in India (IndiGo) or Russia (S7 Airlines and Pobeda). Russia has not been classified as a European nation in this instance since OAG data considers half of the country to be located in Asia.

US extends lead as top market for new routes

The US continues to top the table for the most new routes by country market, with 1,228 links launched from its airports in 2018. This represents a significant 26% increase on the number of new services introduced in the country in 2017. It should be noted that, in this country market section of the analysis, new domestic services are effectively double-counted, since they are considered to represent a new service for both the departure and arrival airports. Since the US is the biggest domestic market in the world for commercial air services, it is unsurprising that 81% of the new routes identified from US airports are operated internally. This still leaves 236 new international links that were launched to or from the US in 2018. The international country markets which saw the most new connections with US airports last year were near neighbours Canada and Mexico, which accounted for 41 and 32 new links respectively. 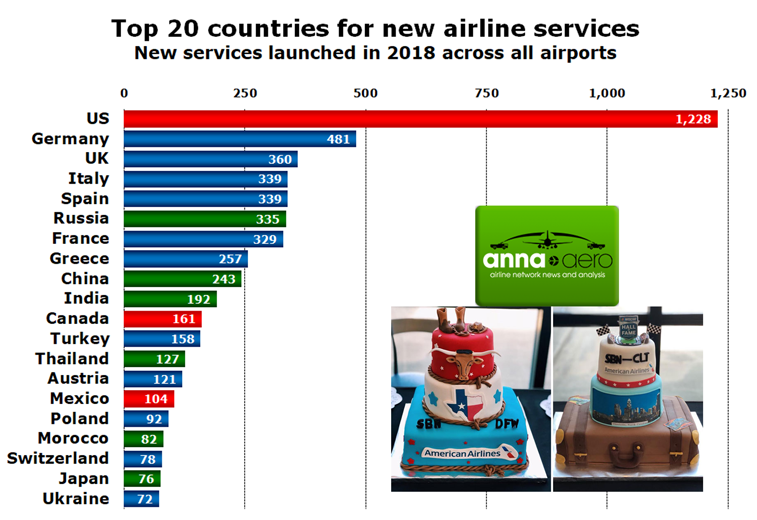 The US extended its lead as the top market for new routes in 2018, with 747 more services launching from its airports than from those in the next biggest market of Germany. This is up from a difference of 507 routes between the top two markets last year. The countries making up the top seven for new routes remain unchanged from 2017 but there has been some movement in the rankings, with the UK leapfrogging Spain to claim third position. Along with the US, Germany, which remains in second place, and France, saw an increase in the number of new routes opened from their airports in 2018. The remainder of the top seven saw a decline in the number of routes introduced last year.

Half of the top 20 country markets for new routes in 2018 were located in Europe (highlighted in blue), with a further three situated in the Americas (highlighted in red). The remainder included Russia, India, three countries in the Asia Pacific region and one in Africa. 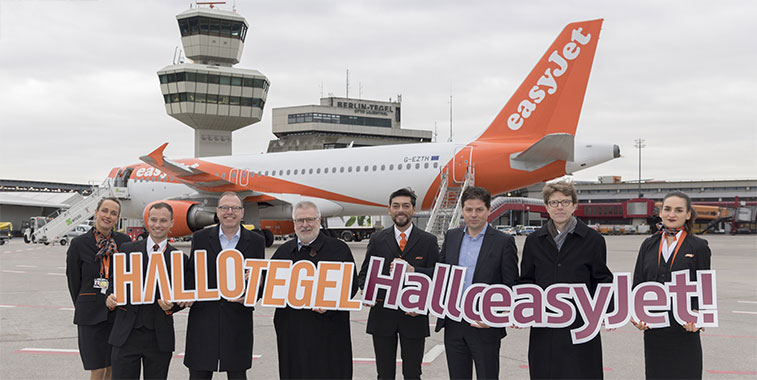 Berlin Tegel saw more new scheduled airline services launched in 2018 than any other airport around the globe. Around half of the German airport’s new services were introduced by easyJet, with the LCC opening a base following the demise of airberlin the previous year. easyJet was third in the airline rankings for most new routes in 2018.

According to anna.aero’s New Routes Database 1,182 airports welcomed at least one new airline service in 2018. Berlin Tegel and Vienna witnessed the most new route launches with 111 and 84 respectively. Neither airport featured among the top facilities for new links in 2017, but have risen to the top of the charts as multiple carriers look to plug the network gaps left by the demise of airberlin and NIKI. easyJet’s decision to open a base at Tegel accounted for around half of that airport’s new services last year, with Laudamotion and Germania were also significant contributors to its impressive raft of new flights. Vienna’s new route count was driven by Laudamotion, Wizz Air and LEVEL, which all opened bases at the airport during 2018.

European airports dominated the rankings for new route launches. As five facilities tied on 35 new routes last year, a top 23 chart has been included here. This shows that 18 of the top 23 airports can be classified as European (highlighted in blue). This includes Moscow Sheremetyevo and St.Petersburg, which are classified as European in this section of the analysis, since they are considered as Eastern European airports by OAG Scheules Analyser. The remaining five airports in the top 23 include four in North America (highlighted in red) and one in the Middle East. On a country market level, Germany, the UK and the US are all represented by four airports among the top 23. The non-European airport celebrating the most new airline services last year was Orlando. The only airport to feature among the top-ranked facilities that was located outside of Europe and the US was Tel Aviv in Israel, which is classed as the Middle East. 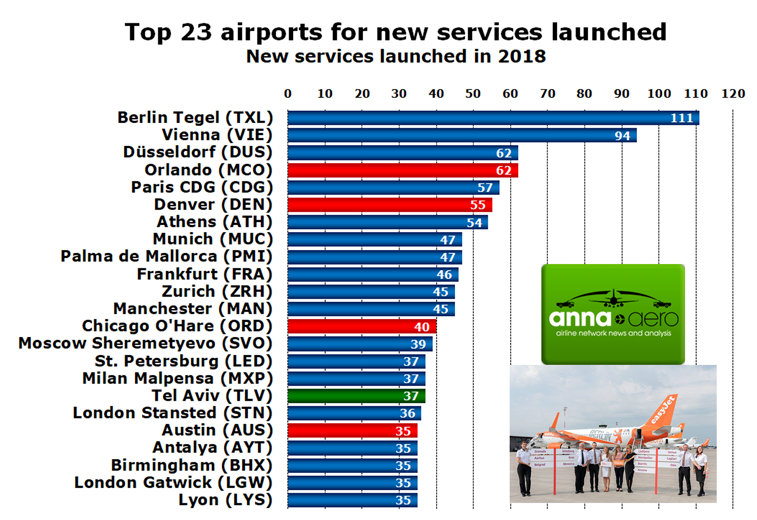 anna.aero’s New Routes Database contains details for more than 1,000 new services currently announced for 2019, but further additions will continue throughout the year. American Airlines has announced the most new routes so far for this year with 53, including 13 new links from Dallas/Fort Worth. Next comes TUI Airways and Wizz Air, which have both confirmed 43 new routes so far for 2019, and United Airlines which has announced 41 services.

If you are an airline or airport and have pictures of route launch celebrations this year we want to see them, especially if they involve cakes, ribbon cuttings, mascots, fire truck water arch salutes, big welcome banners, celebrities, speeches, flowers, cultural dances, juggling, gift exchanges etc, etc, etc. Please e-mail your pictures, ideally with names and titles of any key people involved, to nick.preston@anna.aero and jonathan.ford@anna.aero. We will then gladly share these pictures with our global readership. 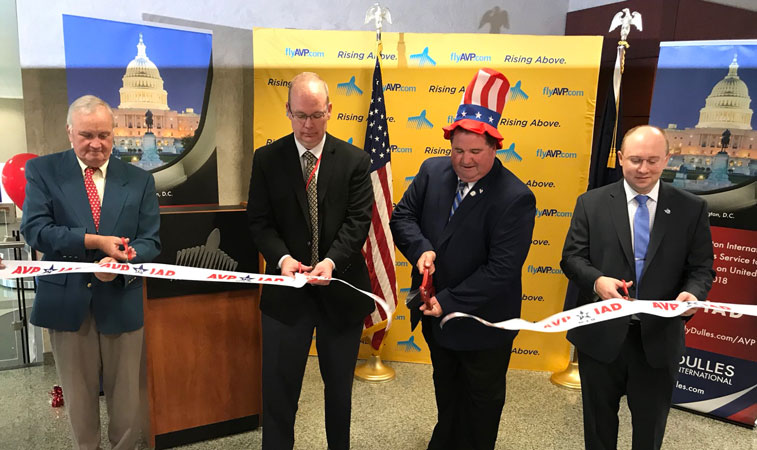 The US is the biggest market in the world for new airline services, with 1,228 launching from American airports in 2018. About 81% of these services were domestic. A ribbon cutting ceremony was held at Wilkes-Barre/Scranton Airport on 4 October last year to officially open United Airlines’ inaugural service from Washington Dulles. United was one of just three full-service carriers to feature among the top 20 airlines for new route launches last year.