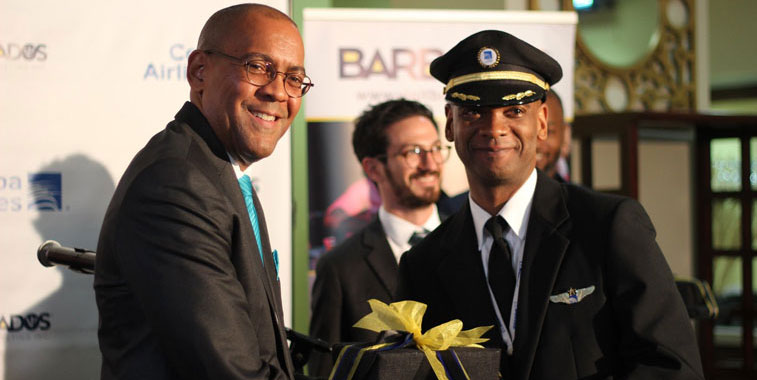 Barbados joined Copa Airlines’ route map on 17 July 2018, the day that the carrier launched a twice-weekly (Tuesdays and Fridays) service from its Panama City base. On hand to greet the inaugural flight at the Caribbean island airport was Kerrie Symmonds, Minister of Tourism and International Transport, who presented Barbados-born Copa Airlines Captain Marc Holford with a gift as a thank you for operating the first return service to Panama City. According to statistics published by Barbados Airport, a total of just over 2.19 million passengers passed through the terminal last year.

Barbados is served by Grantley Adams International Airport, situated some 16 kilometres to the east of the island’s capital and largest city, Bridgetown. The airport is the only point of entry by air to/from Barbados, making it a very important economic and transport hub for the island, regarding passenger movements and cargo. Last year the airport handled 2.19 million passengers, however it is still behind the traffic levels it witnessed prior to 2007 and the global financial crash.

Last year marked the fifth year of consecutive growth in passenger numbers for Barbados Airport, with traffic up 1.0% versus the 2.17 million passengers it handled in 2017. While this growth is minimal, the airport is handling 19% more passengers (345,625 people) per annum then it was in 2013, the year which saw the lowest levels of traffic during the period analysed between 2003 (earliest data available) and 2018. 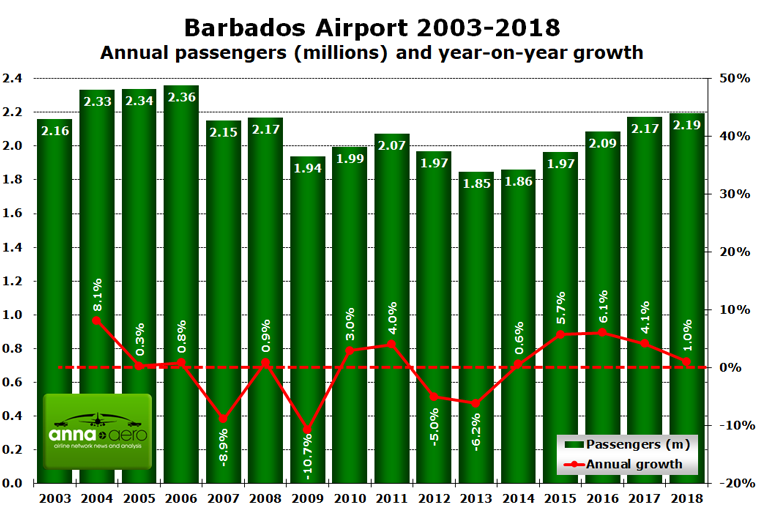 While the airport’s recent history shows that it has developed well in recent years, its traffic levels are still behind those it was reporting in 2006, when the airport was handling 7.0% more passengers than it reported last year.

When placing Barbados’ 2018 monthly traffic figures into anna.aero’s Seasonal Variation In Demand (SVID) Calculator, the airport posts a score of 5.92 – a “Good” rating. While traffic did grow last year, the airport posted a slight worsening in its seasonality profile, with it having garnered a score of 5.70 in 2017, still a “Good” rating. Overall in 2018, 57% of Barbados’ traffic travelled through the airport in the winter months of October to March, with this matching the same percentage that was generated in 2017.

The main purpose of travel to Barbados according to figures from Barbados Tourism Marketing is pleasure, with 76% of the 663,511 visitors to the island in 2017 travelling for the purpose of taking a vacation. Last year’s total visitor numbers were up by 5.1% versus those recorded in 2016, while the previous year saw a 6.7% year-on-year increase in visitor numbers to Barbados. This shows is that the rate of tourism growth to the island is not too dissimilar to the growth statistics seen at the airport. Why this may seem obvious, it is worth pointing out that Barbados is also a popular destination for cruise ship arrivals and departures, with many visitors possibly visiting Barbados while having arrived and departed the Caribbean from another airport in the region.

The United Kingdom is the leading market for international visitors to Barbados, with the country market responsible for just under 34% of tourists to the island in 2017, with its visitor numbers growing by 1.7% versus 2016. In 2018, four British airlines served Barbados, namely Virgin Atlantic Airways, British Airways, TUI Airways and Thomas Cook Airlines. Combined, the four accounted for 29% of Barbados’ airline seat capacity last year, with all four airlines reporting capacity growth to Barbados in 2018, with the leader of the pack being TUI Airways. The leisure operator posted a 7.9% rise in seats to the island in 2018. With the UK airlines having key roles in serving Barbados, it is not surprising that the airport’s most popular route is London Gatwick, which accounted for 19% of seats from the airport last year, with Manchester responsible for 6.6%, and Birmingham 1.5% respectively. 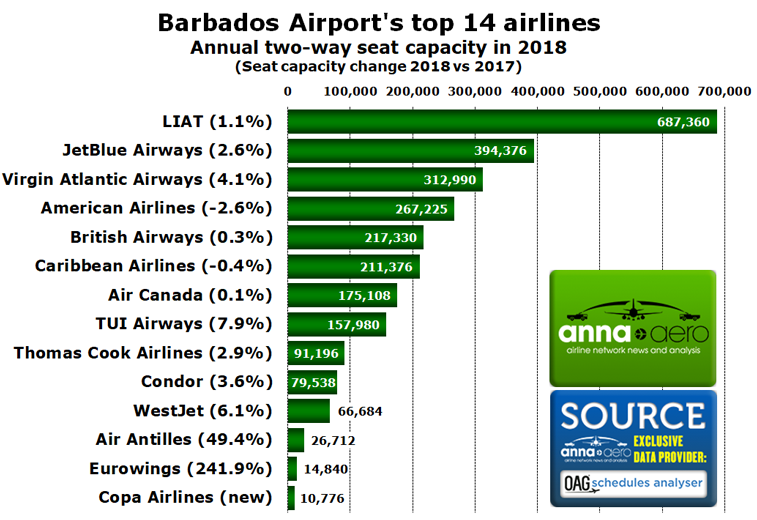 Barbados’ leading airline is LIAT, known as Leeward Islands Air Transport. It currently operates nine routes from Barbados using its fleet of ATR 72-600s and ATR 42-600s, namely to Antigua, Dominica, Fort-de-France, Georgetown, Grenada, Pointe-à-Pitre, Port of Spain, Saint Lucia Charles and Saint Vincent Argyle. During the past 12 months, it has grown its seat capacity from the airport by 1.1%. It should be noted that while Eurowings reported a 242% rise in seats from Barbados in 2018, it did not start flying to the island until 19 November 2017, the day it launched a twice-weekly service from Cologne Bonn. It only serves Barbados during the winter season, with it now linking the island with Düsseldorf and Munich.

A new airline to Barbados in 2018 was Copa Airlines, with it having inaugurated a twice-weekly service from Panama City on 17 July. Two airlines that operated from Barbados in 2017 did not serve the airport in 2018, with Avianca and Delta Air Lines having dropped services. Avianca pulled flights from Barbados on 5 August 2017, ending its twice-weekly service from Bogota, while Delta Air Lines ended its route from Atlanta on 12 August of the same year. 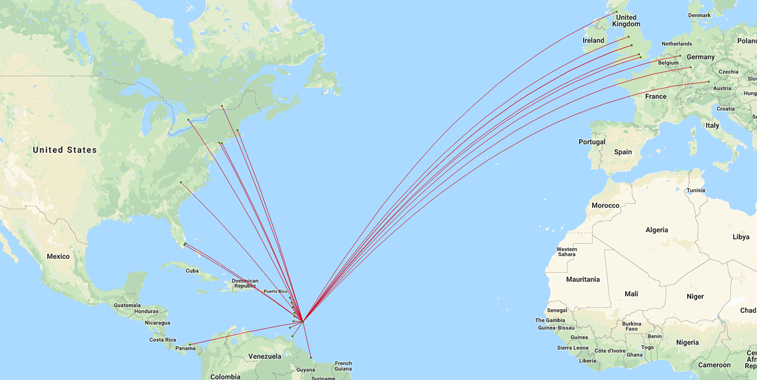 Barbados’ route map shows the importance of the UK market to the island, with it directly connected to five UK airports this winter. The European country accounts for around 34% of the island’s tourists per annum. Along with European and US/Canadian routes, Barbados is also well connected with a number of other islands in the Caribbean.