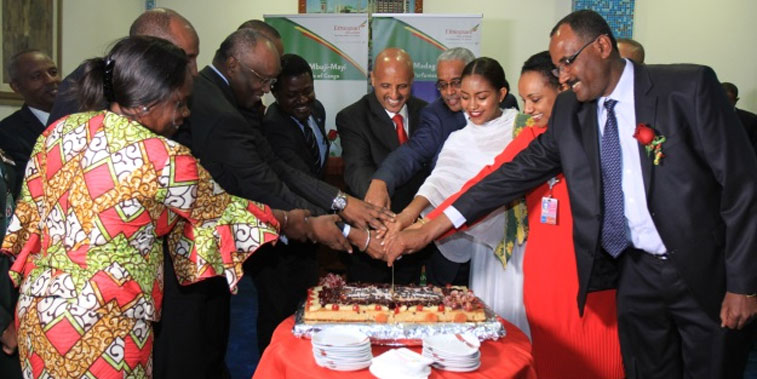 Ethiopian Airlines inaugurated three new destinations from Addis Ababa on 27 March 2018, including to Nosy-Be in Madagascar. Among those at the triple-launch ceremony was Tewolde Gebremariam, CEO of Ethiopian Airlines (centre) who can be seen helping to cut the route launch cake. Capacity on all flights serving Madagascar increased by 8.9% in 2018, with Ethiopia the strongest growing international market.

Madagascar is an island nation in the Indian Ocean, situated to the east of Africa. According to the country’s national tourist office, it has 23 million inhabitants and covers an area of 587,041 square-kilometres. It has 4,800 kilometres of coastline too. In recent times, the available capacity on air links to/ from and within Madagascar has been increasing. anna.aero decided to take a closer look at the air service trends that have taken shape over the past 10 years.

Seat numbers up by one-third since 2009

There were 1.58 million two-way seats available on all flights serving Madagascar in 2009. This had increased to 1.84 million by 2012, before back-to-back years of cuts saw seat numbers drop to 1.49 million in 2014. Since then, the Madagascan market has returned to growth, with four straight years of capacity increases. From 2014 to 2018, capacity grew by 41%, reaching 2.11 million two-way seats last year. The average year-on-year growth rate during this period was an impressive 9.0%. 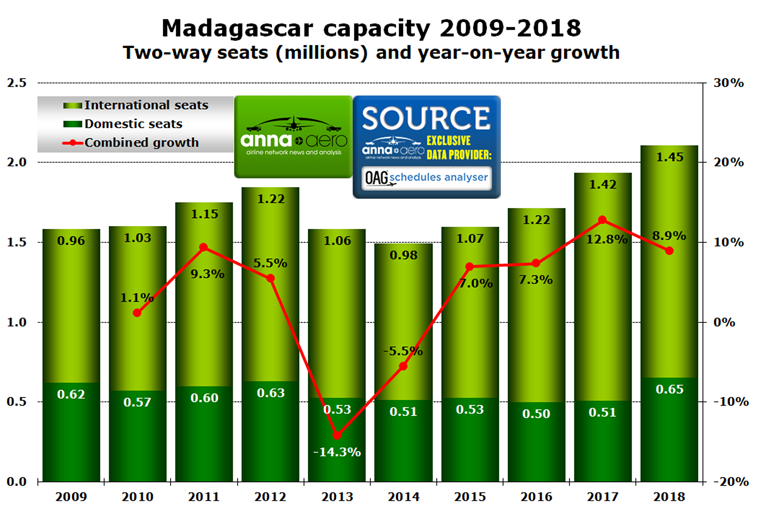 OAG data shows that 14 different airlines offered scheduled services from Madagascar in 2018. Air Madagascar was by far the largest operator, with nearly 880,000 seats available last year, accounting for 42% of the country’s total. A notable new entrant was Tsaradia, a domestic subsidiary of Air Madagascar which began operations for the first time last year.

On an individual destination level, the most popular international airports from Madagascar were Mauritius and Réunion, followed by Paris CDG. The only Madagascan airport with direct flights to Mauritius in 2018 was Antananarivo, which serves the country’s capital city. In contrast, there were scheduled services from six different Madagascan airports to Réunion last year, although several of these saw a limited number of services. The biggest single international airport pair was the link between Antananarivo and Mauritius. OAG data shows that this sector will be served by three carriers offering a combined 13 flights during the week commencing 29 January. The international destination that saw the biggest increase in capacity from Madagascar in 2018 was Addis Ababa. Ethiopian Airlines added a new route from its home hub to Nosy-Be last year, while also offering more capacity on its connection to Antananarivo, which was introduced in March 2017. Five of the top 12 international destination airports witnessed a cut in capacity from Madagascar in 2018 (highlighted in red). The largest of these cuts came on services to Paris Orly, with seat numbers down by 43% 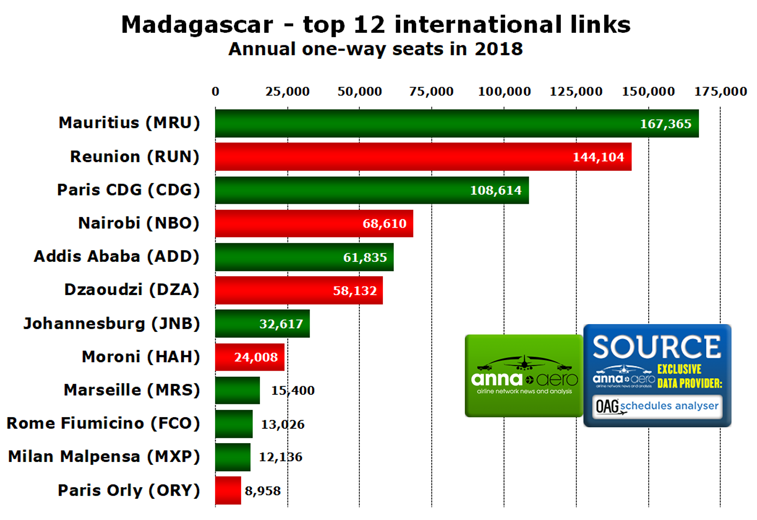 Schedules show that 11 Madagascan airports offered domestic services in 2018. The biggest domestic connections were the links from Antananarivo to each of Toliara and Nosy-Be. According to OAG Schedules Analyser, Tsaradia will serve these sectors with nine direct flights and 12 rotations respectively, during the week commencing 29 January.

Although 11 Madagascan airports offered scheduled air services in 2018, only two of these, Antananarivo and Nosy-Be, offered more than 100,000 departing seats. Antananarivo is by far the biggest commercial airport in the country, accounting for 62% of all departing seats last year. It is the leading airport for both domestic and international flights. There were 21 destinations available from Antananarivo last year, with 10 domestic links and 11 international connections. Departing capacity grew by 9.6% at the country’s biggest airport in 2018, but second-placed Nosy-Be saw the strongest percentage growth, with seat numbers up by 38% compared to 2017. 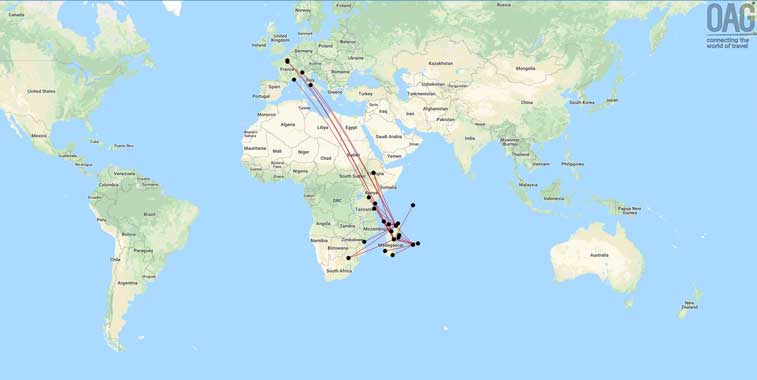 Madagascar’s direct connections in 2018 included 12 different international markets. Although 10 of these are located in Africa, there were also long-haul links to France and Italy. France was the biggest international market outside of the African region, with direct flights available from Antananarivo to Paris CDG, Marseille, and Paris Orly.