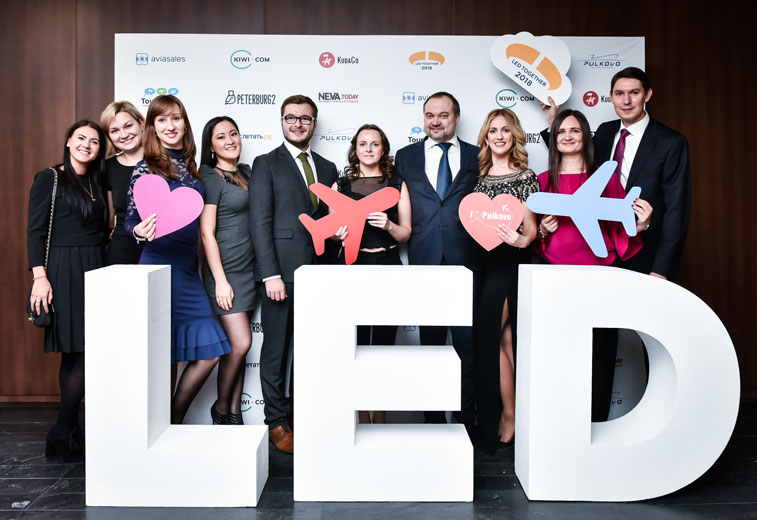 St. Petersburg Airport hosted its seventh annual airline awards on Friday 25 January. Carriers that serve the airport are rewarded for their continued contribution to further increase passenger traffic, development of the route network, plus increasing transfer services at the airport. The winners in 11 categories were revealed at the annual ceremony, titled ‘LED Together’. All winners received awards from the airport and gifts from the partners of the event. The partners of the ceremony were the leading Russian travel search engine, Aviasales.ru; social network for tourists and travellers, TourOut.ru; online entertainment guide to St. Petersburg, Peterburg2.ru; online newspaper, NEVA.TODAY; popular portal about events and places in St. Petersburg, KudaGo; the largest service for package tours search in Russia, Sletat.ru; and the leading international flight booking service for independent travellers, Kiwi.com.

Last year was a very successful one for St. Petersburg, with the airport handling over 18.12 million passengers, representing an increase of over 12% versus 2017. Of those passengers, 11.03 million flew on domestic services, an increase of nearly 11% over the previous year, while 7.09 million travelled on international flights, representing a 15% increase in traffic within the sector.

Among the highlights for St. Petersburg last year was its involvement in the 2018 FIFA World Cup, with the peak day of travel being 11 July, the day after the semi-final match between Belgium and France. Some 74,608 passengers used the airport within 24 hours, representing an average of 3,109 passengers being handled per hour that day, with this comparing to an average hourly passenger processing figure of 2,069 for all of 2018, meaning that 11 July was 50% busier than the average day last year. Overall within the dates of 13 June to 15 July, the time frame of the World Cup, St Petersburg handled 2.2 million passengers. With this success, the airport is happy that the city has also been picked to host some games for the UEFA Euro 2020 tournament, with it scheduled to stage some group games and a quarter-final. 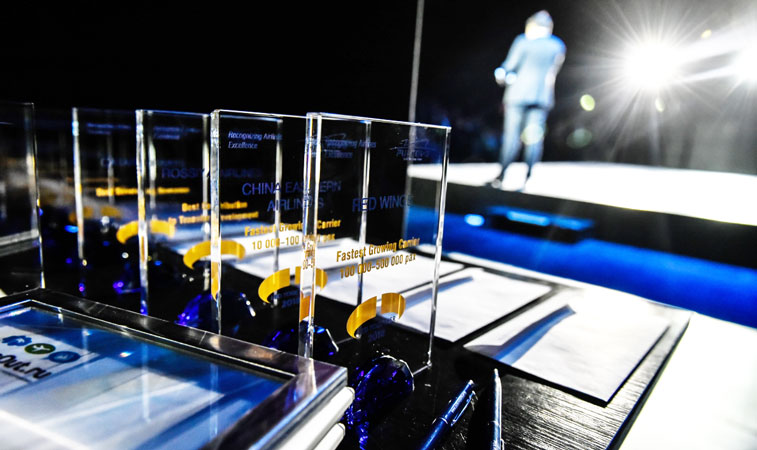 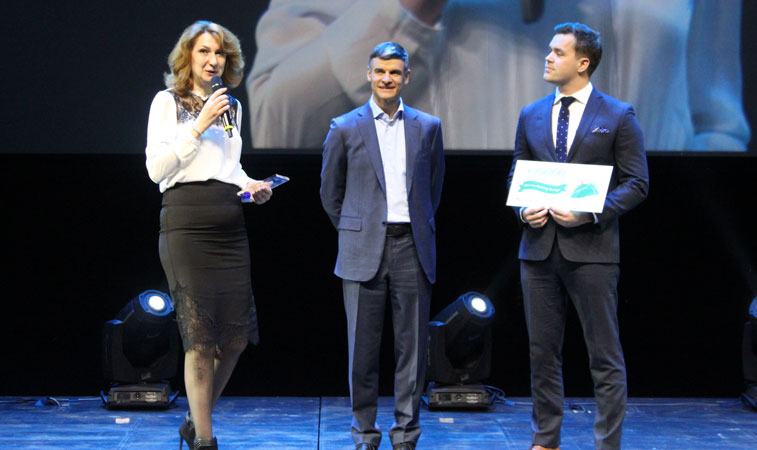 The first award of the evening was presented to Red Wings Airlines, winning in the Fastest Growing Carrier 100,000-500,000 passenger category. Pictured collecting the award for the airline is Lilit Iskandaryan, Deputy CCO, Red Wings Airlines, who was presented the award by Vladimir Yakushev, CEO, St. Petersburg Airport, and Zdenek Komenda, Chief Business Development Officer, KIWI.com. The carrier operated 11 routes from St. Petersburg in 2018.

The first award of the evening was presented to Red Wings Airlines, with the carrier collecting the prize in the Fastest Growing Carrier 100,000-500,000 passenger category. In 2018, the carrier served 382,000 passengers from St. Petersburg, representing an increase in traffic carried of 95% versus 2017. During the year the carrier flew to 11 destinations from the airport, including domestic routes to the popular resort cities of Krasnodar, Simferopol and Sochi/Adler, along with international services to Antalya, Bourgas, Dalaman, Enfidha, Naples, Rimini, Tivat and Varna. 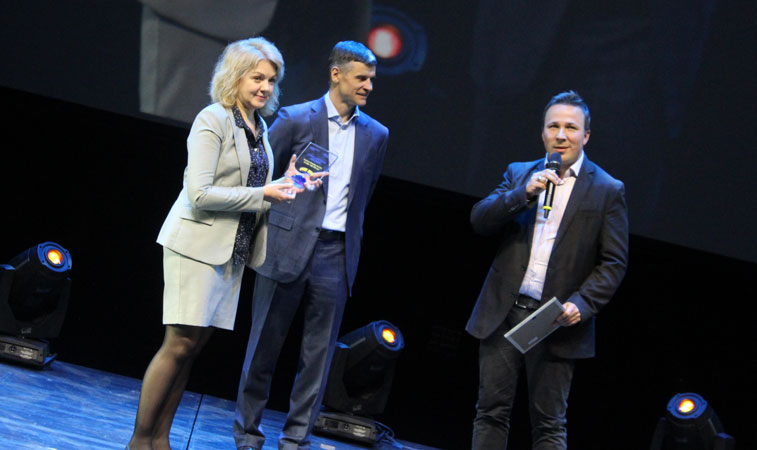 China Eastern Airlines collected the award for being the Fastest Growing Carrier for 10,000-100,000 passengers. Collecting the award on behalf of the airline was Tatiana Khromova, Sales Manager Moscow Branch Office, China Eastern Airlines, who was presented with the trophy by Vladimir Yakushev, CEO, St. Petersburg Airport, and Andrey Dobry, the founder of PDG Publish House. The airline launched its second route to St. Petersburg from Xi’an in 2018.

China Eastern Airlines launched flights to St. Petersburg in June 2016, when it commenced a three times weekly summer seasonal service from Shanghai Pudong. Since then, the airline has continued to grow at the airport, with it adding a second destination to St. Petersburg in 2018, having begun a twice-weekly service from Xi’an in May, while its route from Shanghai Pudong is now flown direct up to five times weekly during the summer. Last year the airline transported 60,000 passengers from St. Petersburg, with this figure being 76% greater than its total passenger count from the Russian city in 2017. With that, the airline was awarded the title of being the airport’s fastest-growing airline in the Fastest Growing Carrier 10,000-100,000 passenger category. 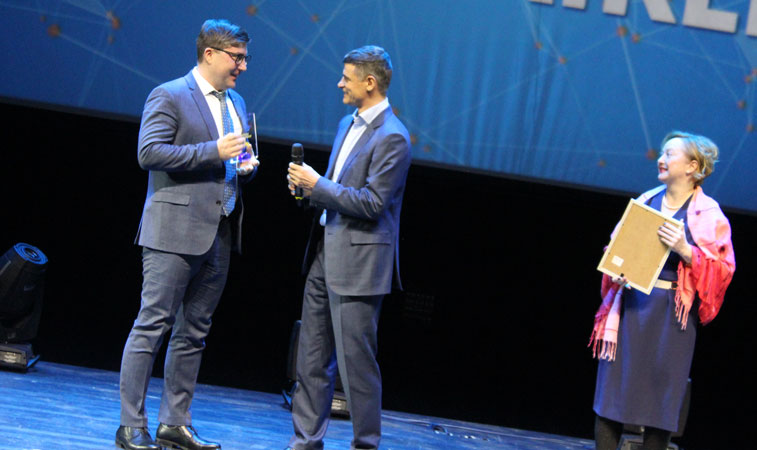 The award for the Best Contribution to Transfer Development was presented to Rossiya Airlines, with it growing its transfer traffic to 467,000 passengers in 2018. Sergey Starikov, Press Secretary, Rossiya Airlines, was presented the award by Vladimir Yakushev, CEO, St. Petersburg Airport, while a gift was also handed over by Tatyana Nikolayeva from TourOut.ru. In 2018, the airline flew 467,000 connecting passengers via St. Petersburg.

The award for the Best Contribution to Transfer Development was presented to Rossiya Airlines. During 2018 it transported 467,000 connecting passengers over the airport, with its network from St. Petersburg spanning 40+ destinations, with the carrier effectively using St. Petersburg’s geographical location as an advantage to offer conveniently timed and short connection options for passengers travelling between Europe, including destinations such as Düsseldorf, Hamburg, London Gatwick, Paris CDG, Prague and Vienna, to destinations in Eastern Russia, including Ekaterinburg, Kazan and Krasnoyarsk. Rossiya Airlines performs flights from St. Petersburg on various aircraft types, including 777-300s and 747-400s. 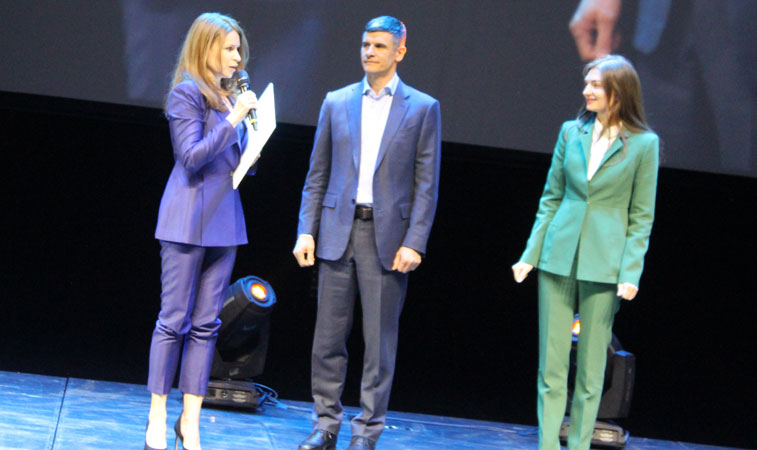 The winner of the Best Developing Newcomer was Qatar Airways, an airline which started flying to St. Petersburg in December 2017. Collecting the award on behalf of the airline was Marina Zabavina, Sales Manager Russia, Qatar Airways, presented by Vladimir Yakushev, CEO, St. Petersburg Airport, while a prize of 100,000 RUB (€1,325) was presented by Sasha Fedorenko, Ad Manager, aviasales, given for the airline to use in advancing its marketing campaigns in the B2B sector.

Qatar Airways launched flights to St. Petersburg on 19 December 2017, operating a daily service to the city from its hub in Doha. In 2018, the carrier flew 66,000 passengers on the connection, with it also using its larger 777-300s during peak times in summer instead of using its A320s which usually perform the route, to meet strong demand. When referencing OAG Traffic Analyser data, the top connections for St. Petersburg-originating passengers using Qatar Airways’ route via Doha are Bangkok Suvarnabhumi, Colombo, Denpasar, Phuket and Singapore. 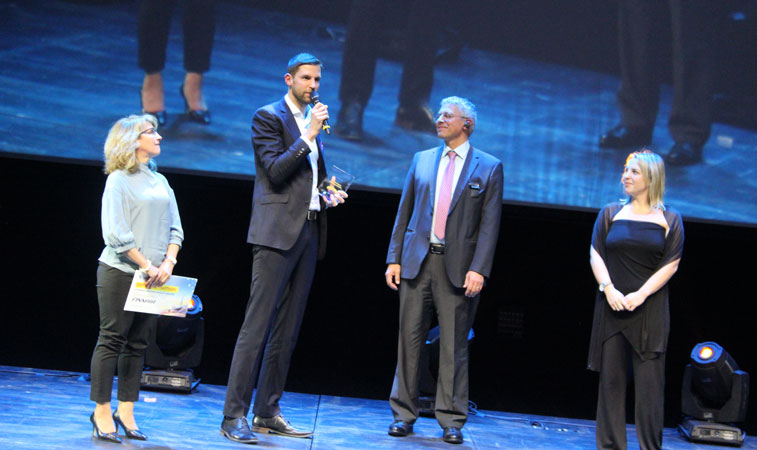 The prize for the Best Developing International Carrier was presented to Finnair. Collecting the award on behalf of the airline was Fredrik Charpentier, Area VP EMEA, Finnair (centre left), with the award being presented by Rudolf Marquet, Director for IT, St. Petersburg Airport (centre right). Another marketing prize was presented to the airline by Elena Tomashevskaya, Deputy Director, Sletat.ru (right). Finnair will add a fourth daily flight to St. Petersburg from March.

Finnair took home the prize for the Best Developing International Carrier. During 2018, the airline transported 144,000 passengers to/from St. Petersburg, with this growing by over 43% versus its result for 2017. During 2018, the carrier increased the number of daily flights it operated to St. Petersburg from Helsinki from two to three, with it also upgauging the aircraft type used on the route from ATR 72-600s to E190s, while from March this year the airline will introduce a fourth daily service. The airline offers seamless connections via its hub in Helsinki, with the most popular onward destination for St. Petersburg passengers in 2018, according to OAG, being New York JFK. 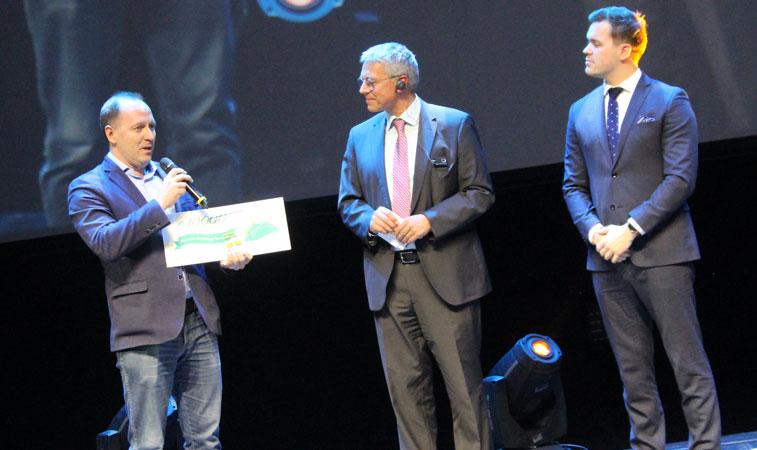 Azimuth Airline first started serving St. Petersburg on 10 October 2017, the day which saw it begin services to the city from Rostov-on-Don. Last year, which was the airline’s first full-year of operations from the city, it flew 166,000 passengers to/from St. Petersburg, while the airline has also added routes to Grozny, Krasnodar and Stavropol since beginning services from St. Petersburg. The airline operates 21 weekly flights from the airport this winter, all flown on SSJ 100s, of which the carrier currently has 10 in its fleet based on Flightradar24.com data. 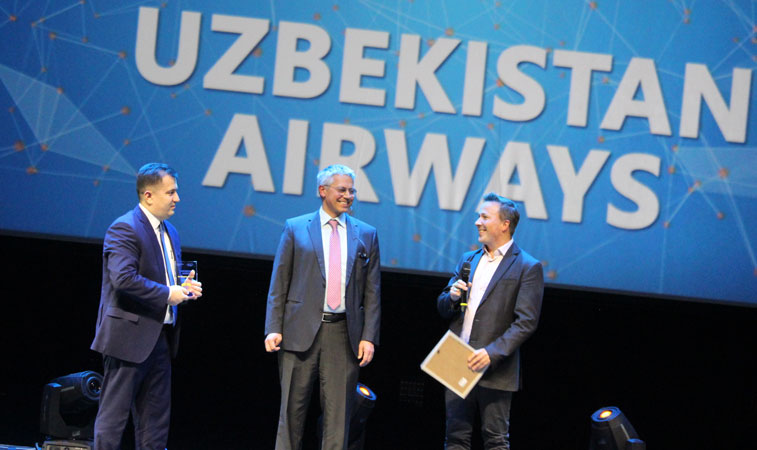 The next prize of the night was the Best Developing CIS Carrier, with the title going to Uzbekistan Airways. The award was received by Ulugbeck Khusainov, Deputy Station Manager St Petersburg, Uzbekistan Airways, with the prize having been presented by Rudolf Marquet, Director for IT, St. Petersburg Airport and Andrey Dobry, the founder of PDG Publish House. In 2018 the carrier flew over 240,000 passengers from St. Petersburg.

Uzbekistan Airways transported over 240,000 passengers from St. Petersburg in 2018, with this result marking a 14% improvement versus the number of people it flew from the city in 2017. The airline currently links St. Petersburg to eight destinations in Uzbekistan, including Samarkand and Tashkent. The carrier, according to schedules data, operates into St. Petersburg using its fleet of 757-200s, 767-300s and its newest aircraft type, the 787-8, with it currently having four of them in its fleet. 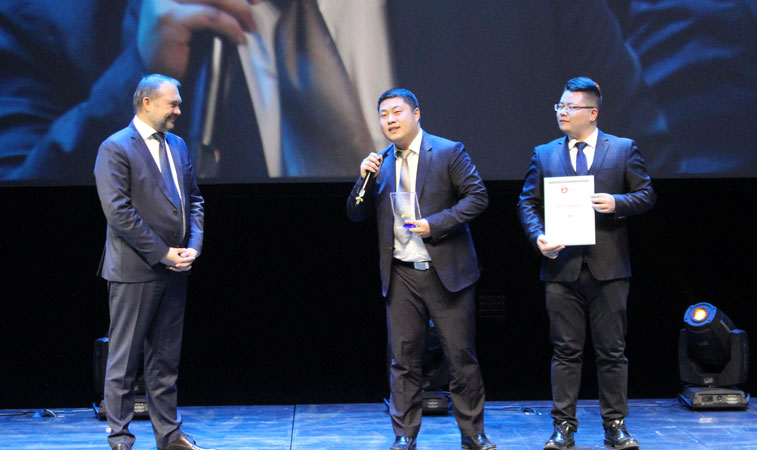 Sichuan Airlines received the prize for Best Developing New Destination, with it being given the prize due to it launching flights to St. Petersburg in January 2018 from Chengdu. The award was presented by Evgeniy Ilyin, CCO, St. Petersburg Airport, with it being accepted by Peng Chao, Head of Representative Office Moscow, Sichuan Airlines (centre).

On 26 January 2018, Sichuan Airlines launched flights to St. Petersburg from Chengdu, a route that it operates twice-weekly. Operated on a year-round basis, the carrier during 2018 flew over 32,000 passengers between the two cities, and with that, the airline was awarded with the Best Developing New Destination prize, with the route helping boost inbound Chinese tourism flows to St. Petersburg. 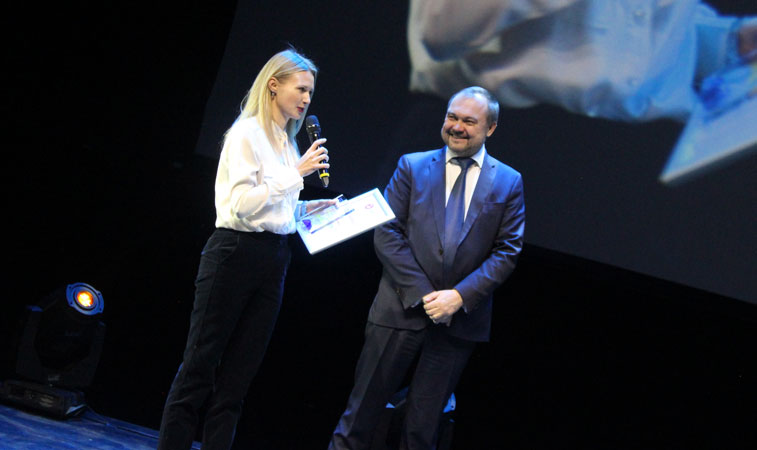 Air Malta was awarded with the title of Best Route Revival. Having not flown to the city since 2015, the carrier reinstated the route between Malta and St. Petersburg in March, with it having flown more than 10,500 passengers over the course of last year. 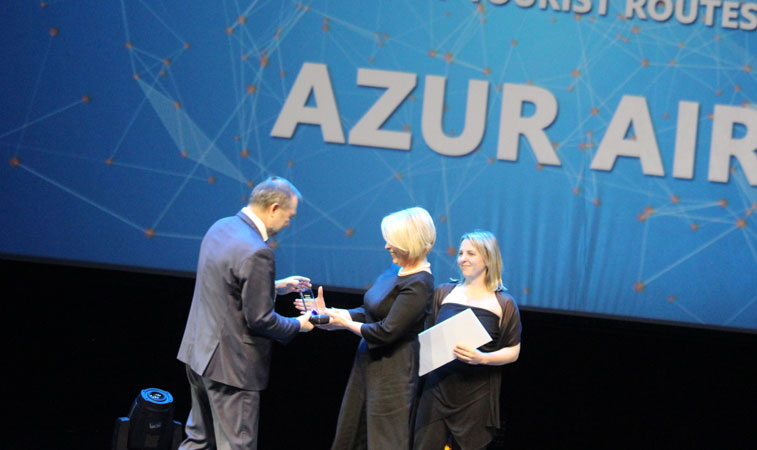 Azur Air was presented by St. Petersburg with the award for Best Development of Tourist Routes, with it operating to 16 destinations from the airport in 2018. Evgeniy Ilyin, CCO, St. Petersburg Airport, presented the award to Anastasia Matyushina, Head of PR, Azur Air, while another prize was handed over by Elena Tomashevskaya, Deputy Director, Sletat.ru. Overall the airline operated 16 routes from St. Petersburg in 2018, carrying 400,000 passengers.

The award for the Best Development of Tourist Routes was given to Azur Air. Offering an extensive flight schedule from St. Petersburg to 16 short- and long-haul destinations, including Nha Trang in Vietnam, plus Punta Cana in the Dominican Republic, Phuket in Thailand and Varadero in Cuba, the carrier flew more than 400,000 passengers from the city in 2018, up by close to 50% when compared to its operation in 2017. The airline reported 1,700 ATMs from St. Petersburg in 2018. 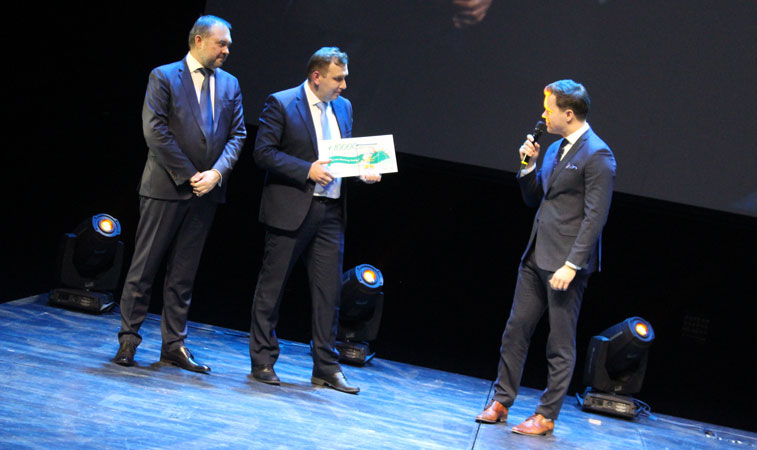 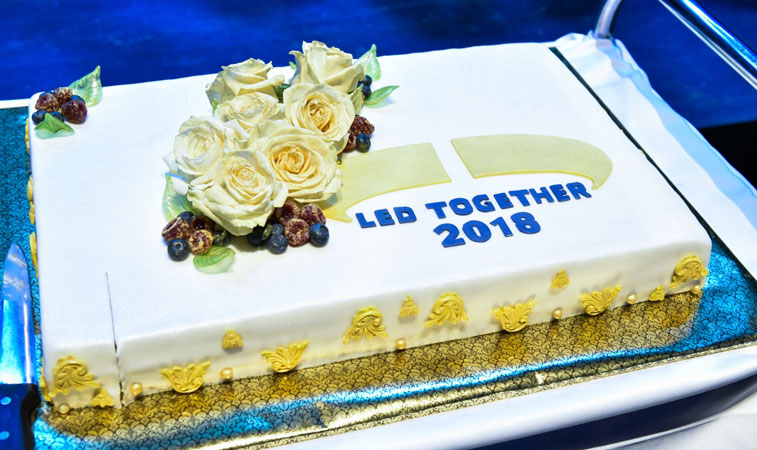 No celebration would be complete without cake, and in true aviation fashion, St. Petersburg made a splendid baked wonder to toast the awards after they had been handed out, with the showstopper featuring the strapline for the evening ‘LED Together’. anna.aero can confirm that the cake, flavoured with an apricot cream, tasted wonderful! 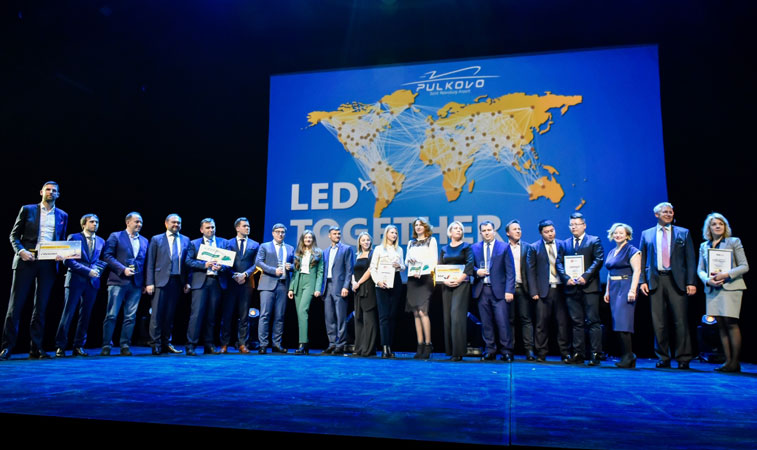 Once all of the awards had been presented, the winners of each category, along with the award presenters, gathered onstage for a group shot for the class of 2018 picture. anna.aero would like to thank St. Petersburg Airport for inviting them along to attend their annual awards ceremony, particularly Margarita Potekhina and Anna Nikiforova. 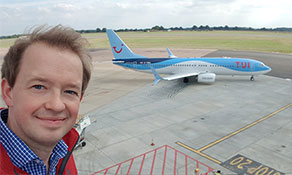 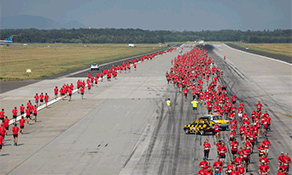