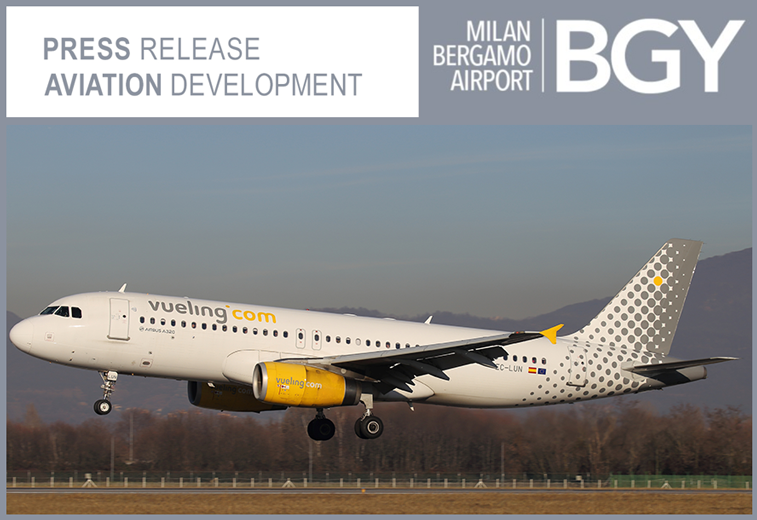 Vueling is returning to Milan Bergamo to operate 14 return ad-hoc flights from Barcelona between 12 April and 5 May, following a series of successful flights that it conducted on the route over the festive period. “Barcelona is one of Milan Bergamo’s most popular routes, with 369,000 passengers travelling between the two airports in 2018. With that, it is great to see that Vueling can see that there is still more opportunity to be had on this pivotal airport pair,” comments Giacomo Cattaneo, Director of Commercial Aviation, SACBO. Photo by Orio Spotter.

Having operated a successful flight program over the festive period, Milan Bergamo has confirmed that European low-cost carrier Vueling is to return to the airport over the Easter break, offering 14 return ad-hoc flights between the airport and Barcelona between Friday 12 April and Sunday 5 May. The result of Vueling’s decision to serve Milan Bergamo during this period means that it will offer close to 5,200 two-way seats on the route to the capital of Catalonia. Flights will be operated by the airline’s fleet of A320s.

“It is great to see Vueling return to the airport this Easter after having operated a series of seven successful flights over the festive period,” comments Giacomo Cattaneo, Director of Commercial Aviation, SACBO. “Barcelona is one of Milan Bergamo’s most popular routes, with 369,000 passengers travelling between the two airports in 2018. With that, it is great to see that Vueling can see that there is still more opportunity to be had on this pivotal airport pair.” Adding further comment, Cattaneo states: “Vueling is the fourth largest airline in Italy’s aviation market, so it is a further boost to the nation’s third largest airport that its passengers can now fly to Barcelona with one of Italy’s most popular airlines using these ad-hoc services over the course of the Easter break.”

Presently operating a fleet of 118 aircraft, Vueling – part of the IAG Group – is the largest airline based at Barcelona, carrying over 19.21 million passengers to/from the city in 2018, up 11.9% versus 2017. “Vueling is in a big expansion drive from Barcelona, so we are very happy that the airline is looking for the second time to Milan Bergamo for further opportunities as it continues to grow its operations from the Spanish gateway,” adds Cattaneo.

MIlan Bergamo Airport’s confirmed route developments for 2019 so far include: