AirAsia grew by 23% from Kota Kinabalu in 2018 and added two international links; operates a 20-destination network from the airport 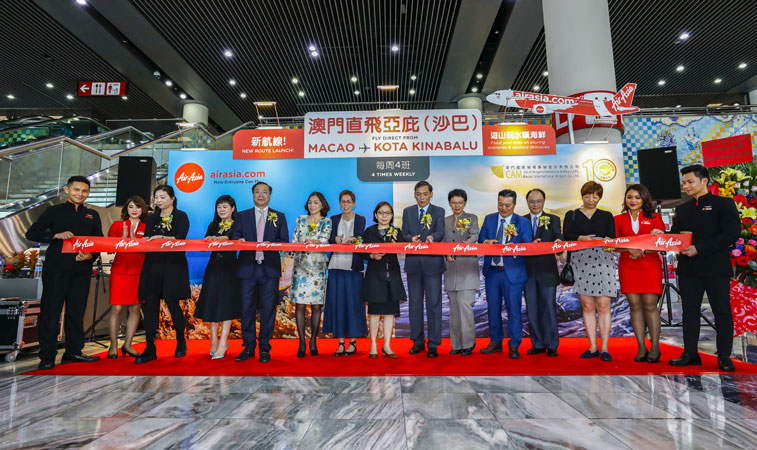 AirAsia launched flights from Kota Kinabalu to Macau on 2 November, a route that the carrier operates four times weekly using A320s. It was one of two routes launched by the airline from the Malaysian airport in 2018, with the other being Kunming, with the latter becoming the airline’s 20th route from Kota Kinabalu. Overall the airline offered 5.73 million seats from the latter airport last year, with this marking a 23% increase in capacity versus its 2017 operation.

AirAsia’s second largest base, regarding total seat capacity in 2018, is Kota Kinabalu, with the airline having offered 5.73 million two-way seats from the airport last year. The airport itself had a total of 11.20 million scheduled seats on offer across all its airline partners in 2018, up 11% versus the 10.07 million two-way seats flown in 2017. Over the past year, AirAsia has grown its market share of all seats from Kota Kinabalu from 46% to 51%, with 2018 being its most dominant at the airport over the past decade, with its market share having fluctuated between 46% and 50% from 2009 to 2017.

It should be noted that the analysis for this feature only takes into account flights operated by AirAsia under their AK flight code, with Kota Kinabalu also being part of the Thai AirAsia (FD flight code) network, with it operating three weekly flights from Bangkok Don Mueang, a route which launched on 16 August last year. Kota Kinabalu has also been part of the Philippines AirAsia (Z2 flight code) network since 1 February 2017, the day in which the carrier began a four times weekly service from Manila. 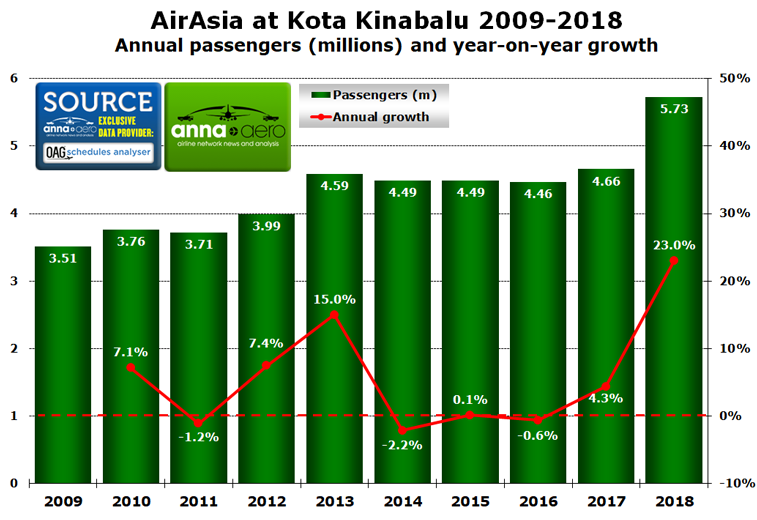 During the past 10 years, only three have reported drops in capacity, with the number of seats on offer decreasing in 2011, 2014 and 2016. When looking at individual route data, a number of services saw increases in available seat capacity last year, with the average capacity increase across all routes being 18%. Kuala Lumpur saw the biggest increase in net seats, with there being 329,000 more two-way seats operated on the route in 2018 versus 2017, while four other routes, namely Tawau, Kuching Sandakan and Miri, all saw a six-digit increase in available two-way seats last year.

KUL is the killer route

The leading route for AirAsia from its second largest base is to its biggest, with the carrier operating between 13 and 15 daily flights to Kuala Lumpur during the week commencing 13 February 2019. Overall, services to Kuala Lumpur account for 28% of all of the airline’s weekly flights from Kota Kinabalu during the week analysed. Following Kuala Lumpur, the second most popular service is Tawau followed by Sandakan. The top international services are Hong Kong, Shenzhen and Singapore, with these three routes all seeing a twice-daily operation during the W18/19 season. 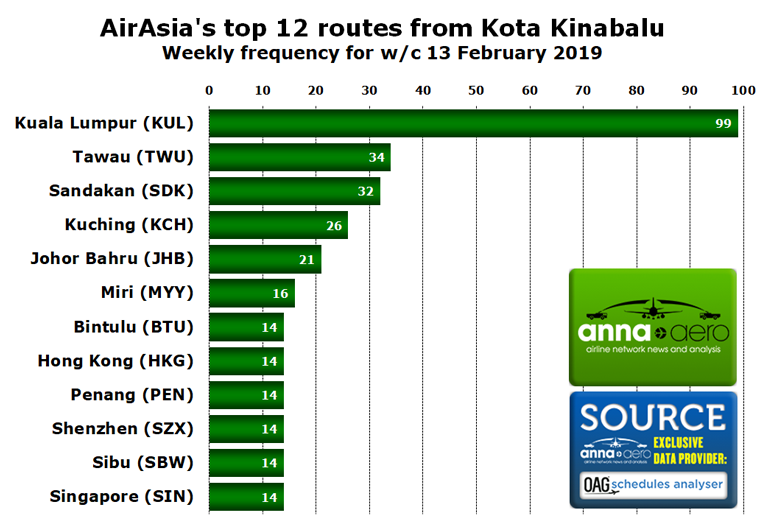 In 2018, AirAsia’s route map from Kota Kinabalu grew from 18 to 20 destinations, with routes to Kunming and Macau added to the schedules in November. Of the 20 destinations flown to by AirAsia from Kota Kinabalu, the split between domestic and international services is 50/50, with both sectors having 10 routes each. Back in 2009, the airline offered 12 routes from Kota Kinabalu, with the only route operated than that is not flown now being Clark in the Philippines. Since then, the carrier has expanded Kota Kinabalu’s reach to North Asia. In 2010, routes to Hong Kong and Taipei Taoyuan, while two years later a service to Guangzhou was added to the schedule. Flights to Hangzhou were added in 2013, while 2016 saw the introuction of flights to Wuhan, with these developments highlighting the carrier’s push of more routes to the North Asia from Kota Kinabalu. So far for 2019, AirAsia has not confirmed any new routes from Kota Kinabalu, although on 18 January it did begin a daily link to Bandar Seri Begawan, a route which is just 166 kilometres in length. 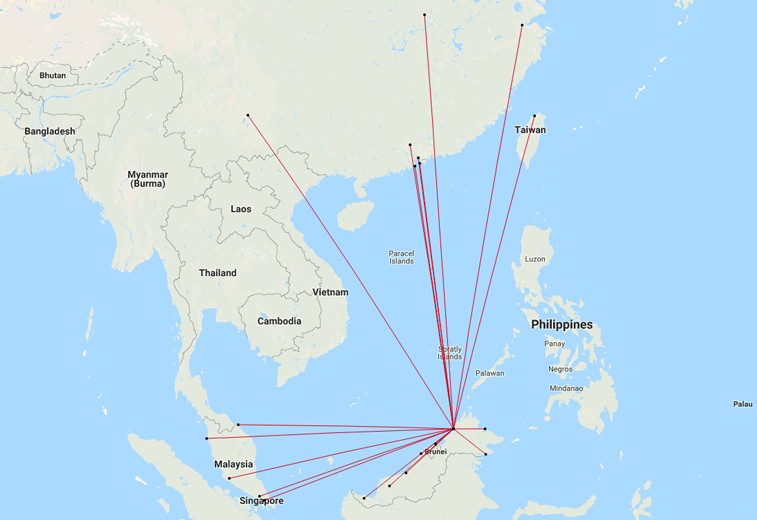 AirAsia operates a network of 20 routes from Kota Kinabalu, with the most recent additions being Kunming and Macau, routes that were launched by the airline in November last year. For 2019, no new routes have been confirmed so far. Overall the network is split 50/50 regarding number of domestic and international links, with 10 in each market.