Wizz Air to base third A320 in Kutaisi and open six new routes; results in a total of 27 routes for 2019 and over one million seats 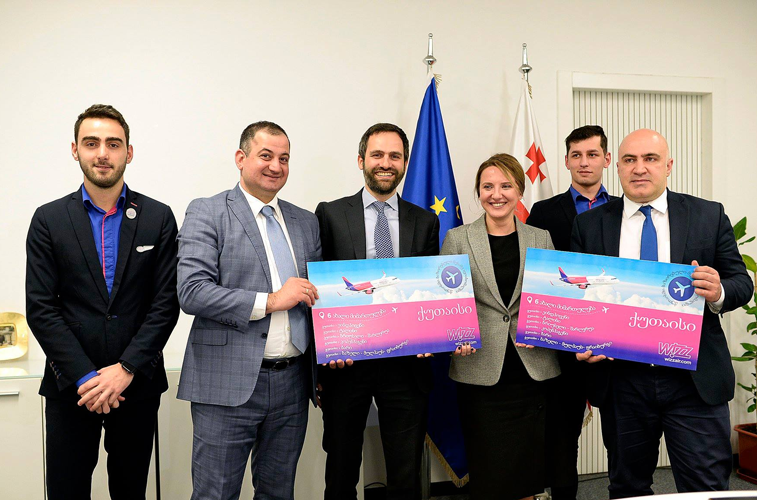 Wizz Air confirmed on 1 February that from 1 August it will base a third aircraft in Kutaisi, opening new routes to Bari, Basel, Brussels Charleroi, Copenhagen, Eindhoven and Tallinn. Among those pictured at the announcement along with some of the airline’s crew were: Akaki Saghirashvili, Deputy Minister of Economy; George Michalopoulos, CCO of Wizz Air; Dea Matchavariani, Chief Business Development Officer, United Airports of Georgia; and George Chogovadze, Director General of United Airports of Georgia. The news means that Wizz Air will operate 27 routes from Kutaisi in 2019.

On 1 February, Wizz Air announced that from 1 August it will base a third A320 at Kutaisi Airport in Georgia, operated by United Airports of Georgia, the company which successfully hosted CONNECT 2018. The investment will allow the airline to open new routes to Bari, Basel, Brussels Charleroi, Copenhagen, Eindhoven and Tallinn. All routes will be flown twice-weekly except for Eindhoven which sees a three times weekly rotation. The result of the investment means that for 2019, the carrier will operate one million seats from the airport, supported by a network of 27 destinations across 18 countries, with new routes to Gdansk (launching in April) and Krakow (September) also scheduled to begin in 2019.

Zero to one million seats in seven years

Wizz Air launched its first flights to Kutaisi in October 2012, with it having begun services from Kiev Zhulyany under its then Ukrainian IATA code (WU) when Wizz Air Ukraine existed. During the three months of operation for the airline in 2012, it flew 12,240 two-way seats from Kutaisi, with this having grown to 685,500 last year. The airline opened its base at the airport on 23 September 2016, initially with one based aircraft. The airline based its second aircraft at the airport on 17 May 2018, with the third aircraft following just over 12 months after. “Our continuous growth in Kutaisi further strengthens Wizz Air’s commitment to Georgia, the city and the airport of Kutaisi, as well as stimulate the tourism and hospitality sectors in Georgia,” commented Johan Eidhagen, Chief Marketing Officer of Wizz Air on the news of the company’s decision to base a third aircraft in Kutaisi.

The news of the based aircraft comes as the Georgian aviation market continues to thrive. Kutaisi Airport alone in 2018 transported 617,373 passengers based on data from Georgian Civil Aviation Agency, with this representing an increase of 52% versus the traffic throughput of 2017. The result also means that Kutaisi overtook Batumi to become the second busiest airport in Georgia. 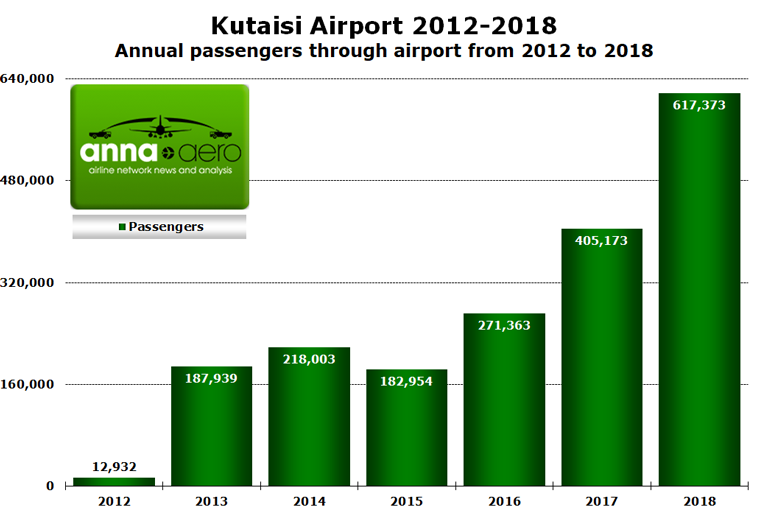 The investment of a further aircraft at Kutaisi by Wizz Air from August means that the airline will operate just over one million seats from Georgia in 2019, with this representing an estimated increase for the year of 40% versus 2018. Of the new routes being announced by Wizz Air on 1 February, non of them are currently served directly from Tbilisi, however the Georgian capital is connected non-stop to Brussels Airport by Georgian Airways. Based on OAG Traffic Analyser data, 12,000 people flew indirectly between Georgia and Copenhagen between October 2017 and September 2018, while 14,100 travelled between the nation and Tallinn within the same period. Brussels, although served directly, saw 20,000 indirect passengers during the same 12 months. While the market from Georgia to Basel is not big, there is currently no direct service between the nation and Switzerland, with this service opening a non-stop link between two nations which saw over 26,000 indirect passengers over the 12-month period analysed. While Bari and Eindhoven are not massive markets from Georgia regarding indirect traffic flows, the airline has proven that it can generate demand from both airports, with this also evident from Kutaisi. 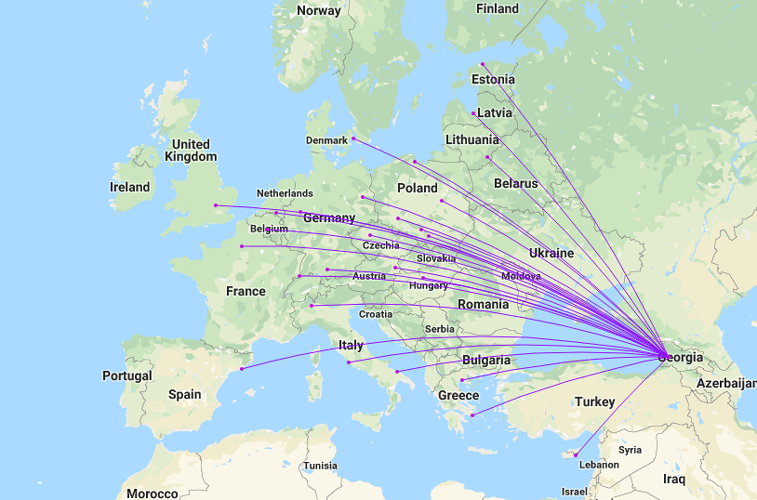 Wizz Air’s route map from Kutaisi in 2019 is made-up of 27 destinations, with the third based aircraft allowing for new routes to Bari, Basel, Brussels Charleroi, Copenhagen, Eindhoven and Tallinn to be launched, while flights to Gdansk (launching April) and Krakow (September) have also been confirmed. The airline will offer one million two-way seats from Kutaisi in 2019, with the commitment of a third aircraft resulting in a capacity increase of 40% this year.