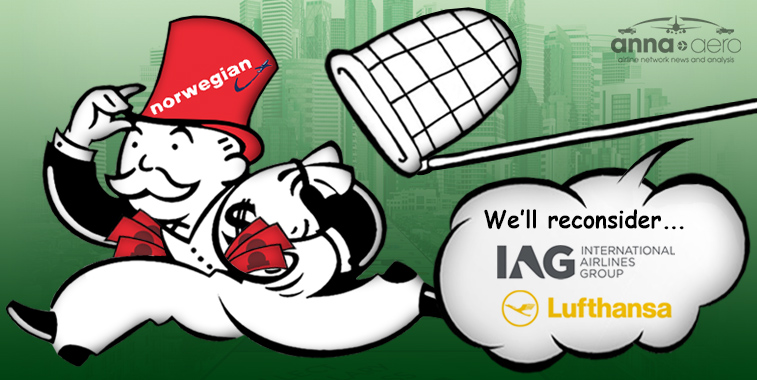 Over the past few months, both IAG and Lufthansa groups have looked at the possibilities of pursuing a purchase for Norwegian, however neither has made a move. Could the news that Norwegian’s average fares across the Atlantic went up in 2018 sway them? British Airways, Iberia and Lufthansa have posted drops in average economy fares, which in turn will impact on profitability as costs, including fuel, start to rise. Could this entice an offer from these groups as Norwegian reaps the benefits of the transatlantic market? With the airline also posting an improvements in its yields from Gatwick, it could also sweeten the prospect.

anna.aero has partnered with RDC to bring you the latest in-depth aviation industry outlooks. In the second feature of the tie-up between the two companies, an evaluation of Europe’s leading flag carriers’ point-to-point economy air fares, which includes government taxes, across the Atlantic has been conducted to see how they have changed in the past 12 months as the market continues to be saturated by LCCs.

While the talk of low-cost travel in the lucrative transatlantic market has been discussed for over 30 years, it is only in the past four-to-five years that the sector has really thrived. Based on capacity data from OAG, 8.60 million two-way seats were flown on routes between Europe and North America in 2018, with this representing a massive increase of 66% versus 2017, while the market has grown from just 124,000 two-way seats in 2013.

This analysis looks at the data for the following full-service airlines: Aer Lingus, Air France, British Airways, Iberia, KLM and Lufthansa (classed as European flag carriers), while for the LCC sector Norwegian is the only airline to be scrutinised due to its domination in the low-cost transatlantic market.

Based on data provided by RDC, the weighted average fare on point-to-point services from Europe to North America for European flag carriers in 2017 was €491.13. A year later, and the recorded result was €446.32, with this marking a 9.1% decrease in the average fare over the past 12 months. The biggest change in fares among the European flag carriers has come from Lufthansa. It is the most expensive carrier when it comes to point-to-point transatlantic airfares, with its average fares in 2017 having been 23% greater than the airlines’ collected mean fare. In 2018, its North American airfares fell by just under 17%, with its fares now being just 13% above the collective average. Following Lufthansa, the other airline which saw a big drop in its average weighted airfare was Iberia, with a 13% decline. 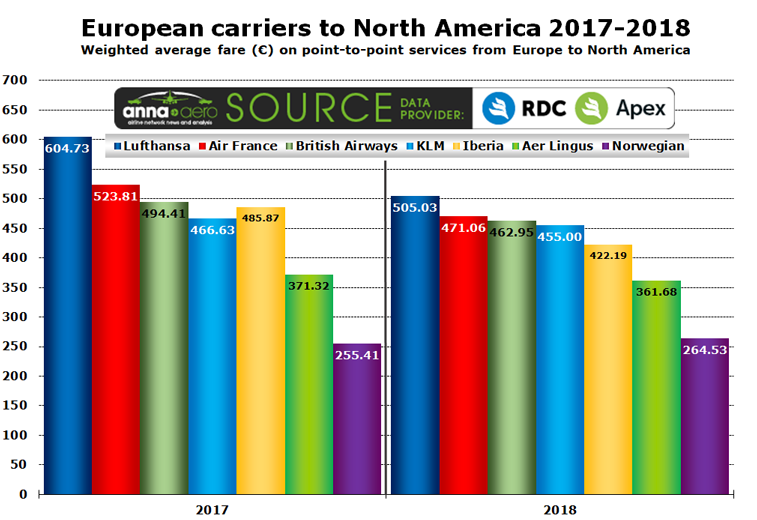 The smallest decrease among the European flag carriers came at KLM, which reported a 2.5% cut in its average fare, while Aer Lingus was the second smallest, posting a 2.6% reduction. For KLM, its home market of the Netherlands has not been a big player on the low-cost scene, with the biggest development in 2018 coming from Norwegian which began services to New York JFK. Ireland however saw Norwegian begin an array of North American services from Dublin, Shannon and Cork, in 2017, although non of the routes competed directly with Aer Lingus. The Irish operator the had lowest average weighted fare among the European flag carriers included in this analysis. Aer Lingus’ average fare advantage over Norwegian on services from Euorpe to North America dropped from 45% to 36% over the past 12 months.

Going against the trend of European flag carriers, it would appear that low-cost airlines grew their average fares in 2018, with Norwegian seeing its average weighted fare on point-to-point services growing by 3.6% from €255.41 to €264.53. This would also support the airline’s reports of improving its yields on services from London Gatwick, with many of its operations from the airport being long-haul.

With Lufthansa and Iberia reporting the biggest drops in weighted average point-to-point fares, it is not surprising to see that their home markets of Germany and Spain saw the biggest rise in low-cost transatlantic seats last year. Spain reported a 244% increase in the market during 2018 based on OAG data, with the number of departing low-cost transatlantic seats going from 85,000 in 2017 to 294,000 last year. Germany encountered a 143% rise, going from 79,100 one-way seats to 192,500 during the same period.

Looking ahead to 2019 developments in the market

These are the newest North American transatlantic routes which are being launched by the airlines which were included in this analysis, with them all to launch this coming summer.

While these are new routes from these airlines for 2019, it should be noted that Lufthansa is taking over from Condor between Frankfurt and Austin, while Norwegian’s new routes to Miami and San Francisco from London Gatwick are airport switches from Fort Lauderdale and Oakland.

To get more detail into the numbers behind this feature looking at, go to RDC Aviation’s mini-site to learn more about their airline performance data. 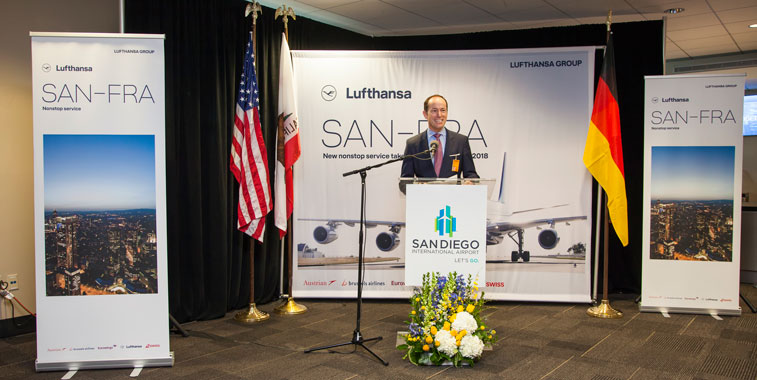 Lufthansa launched only one transatlantic service in 2018, with it beginning a five times weekly service between Frankfurt and San Diego. Pictured at the launch ceremony is Larry Ryan, Director of Sales US, Lufthansa Group. In 2018, Lufthansa’s North American airfares fell by just under 17%, with its fares now being 13% above the collective average of Europe’s leading flag carriers across the Atlantic, with it still being the most expensive airline for point-to-point routes.