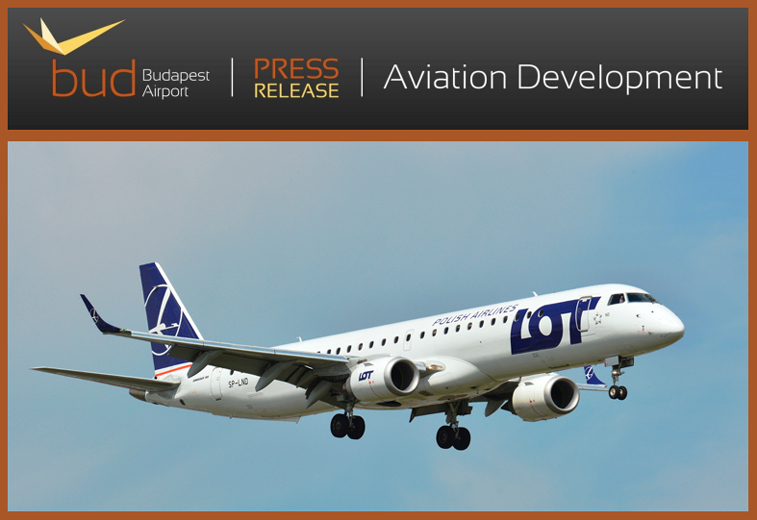 LOT Polish Airlines has confirmed that it will station an E195 at Budapest from 2 September, opening new routes to Bucharest and Brussels, with both European capital cities being flown to 12 times a week, allowing for passengers to make same-day returns for business, while also allowing for more seamless connections onto the airlines other routes from Budapest, including its pivotal transatlantic connections, along with fellow Star Alliance member services.

Budapest Airport and LOT Polish Airlines have announced a significant commitment to the future of the Hungarian gateway’s network development. The European flag carrier confirms it will be base one aircraft and add two further routes from Budapest later this summer. A member of Star Alliance, LOT will become one of the main hub airlines at the airport, with the investment also opening new connection opportunities for other European markets, which in turn will advance passenger flows through Budapest.

Commencing 12 times weekly operations to both Brussels and Bucharest from 2 September, LOT’s high-frequency service will utilise the carrier’s three-class E195s, ultimately targeting business passengers wanting to travel between the capital cities as well as vital onward connections, including the carrier’s pivotal long-haul routes to New York and Chicago from Budapest. While providing vital links for Hungarian travellers on LOT’s extensive route network, the new services make numerous other global destinations available via other Star Alliance partners.

Commenting on the news, Jost Lammers, CEO, Budapest Airport enthused: “We’ve always had a successful partnership with LOT Polish Airlines so it’s a proud moment to see the commitment the airline is making, not only to the airport but to Hungary as a country. Growing from just a multi-daily service to Warsaw in 2017, the airline has advanced to carrying over a quarter of a million passengers a year from Budapest. The announcement of further growth in 2019 shows that the airline is performing well at our airport, and that it is looking to further advance its presence here.” Commenting further, Lammers stated: “These services to Brussels and Bucharest are essential for the business traveller requiring day trips, as well as the tourist needing a weekend break in our beautiful city. Working closely with our partners we will continue to further boost the competiveness of the Hungarian market, strengthen our economy and increase our connectivity to the world, which is more crucial today than ever before. Moreover, BUD’s recently announced €700m airport development programme will significantly increase capacities, service levels and passenger convenience.”

“Fulfilling the promise given to Hungarian passengers, LOT continues to grow in Budapest as we announce more new direct flights to important cities in Europe and the world. After London City, it will be time for services to Brussels and Bucharest, the capitals with so far underserved connections by a full service airline. From now on, only LOT will offer three classes of travel on-board comfortable Embraer jets. That’s what our passengers are looking for,” says Rafał Milczarski, CEO, LOT Polish Airline. “With these new flights we will start developing transfer traffic via Budapest Airport. That applies to passengers from Bucharest, who connect in Budapest, i.e. to London City, New York and Chicago, as well as to Brussels. The offer of transit connections will definitely increase the attractiveness of Budapest Airport,” adds Milczarski.

Budapest Airport’s confirmed route developments for 2019 so far include: