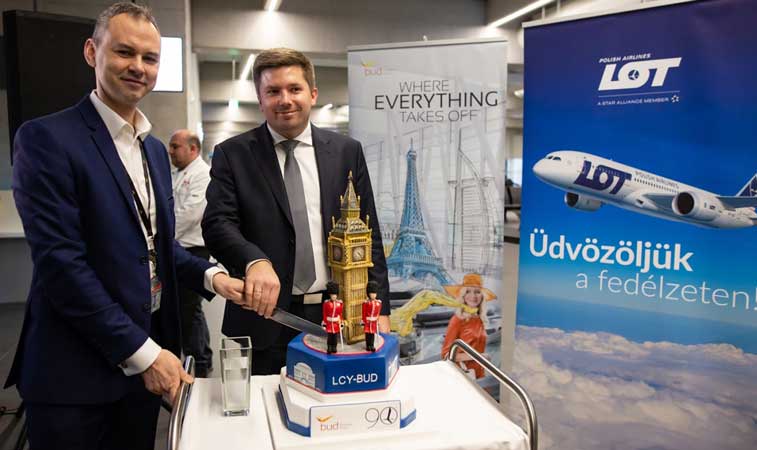 Cutting the impressive London-themed cake in Budapest to celebrate LOT Polish Airlines’ first flight to London City on 18 February were Balázs Bogáts, Head of Airline Development, Budapest Airport, and Adrian Kubicki, Executive Director and Spokesperson, LOT Polish Airlines. The carrier will serve this European capital connection 12 times weekly, with a twice-daily service on weekdays, with a single rotations on Saturdays and Sundays. 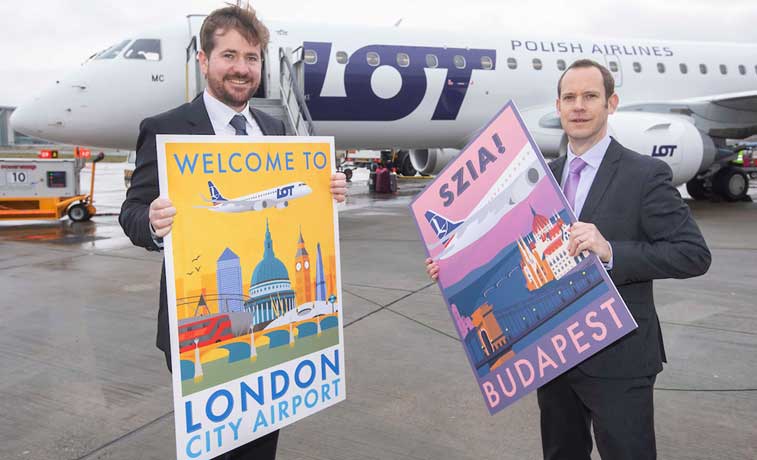 Welcoming the first arrival at London City were Richard Hill, CCO, London City Airport, and David Bentley, Regional Director of Sales, LOT Polish Airlines. The airline acquired four E190s for its operations to London City. It opened a route from Warsaw Chopin in January and will add a further connection in May when it begins flights from Vilnius. 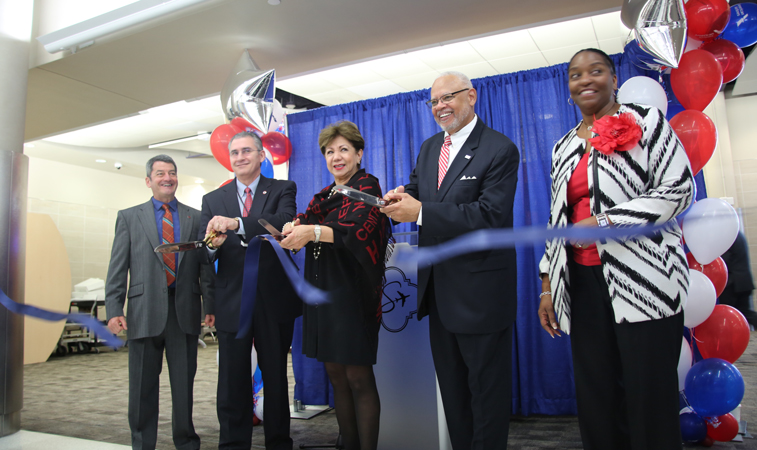 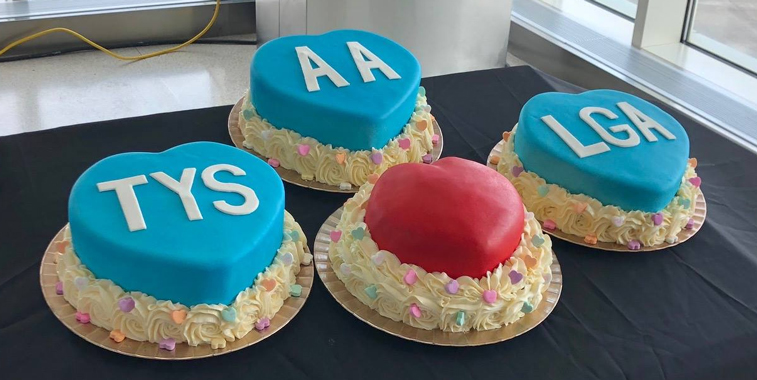 As American Airlines’ inaugural service between New York LaGuardia and Knoxville fell on Valentine’s Day, the Tennessee airport went along with the love-theme for the first flight cake, with it baking four heart-shaped cakes, with three depicting the airline’s new connection. The carrier will offer a twice-daily service on the airport pair. 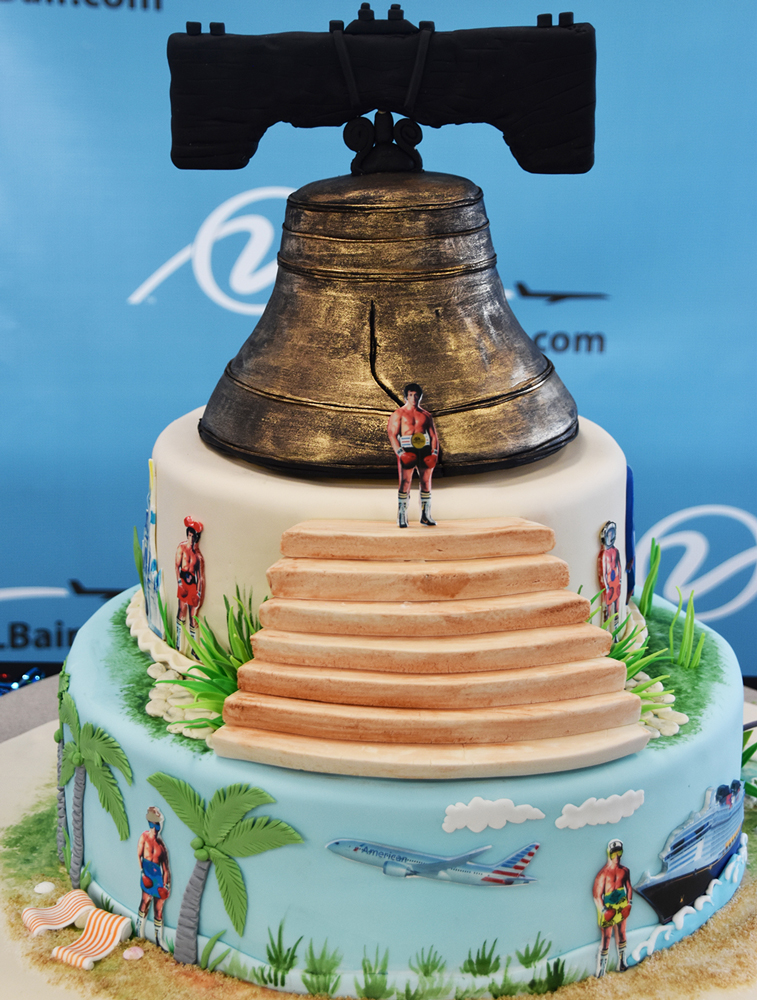 Orlando Melbourne went all-out with its cake to celebrate American Airlines’ first service from Philadelphia. The Rocky-themed cake was the spotlight of the event, with Rocky himself wearing his famous red boxing gloves along with some new gear fit for Orlando Melbourne’s beaches, cruises and theme parks, and then topped with America’s Liberty Bell. 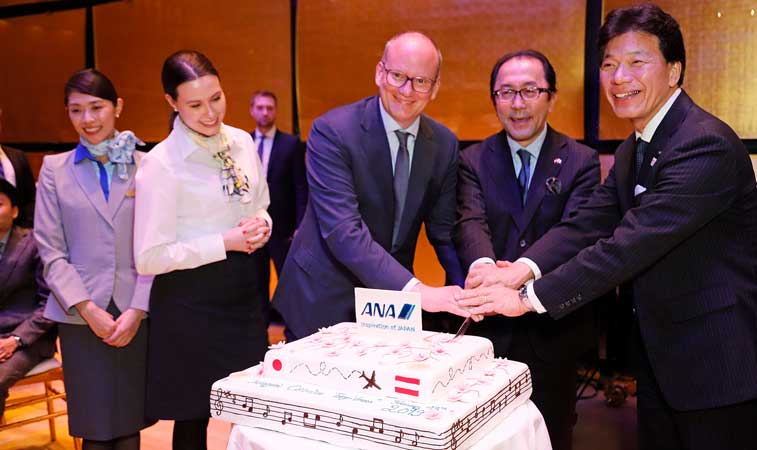 There were celebrations in Vienna on 17 February as All Nippon Airways launched its new service from Tokyo Haneda. Julian Jäger, Joint CEO and COO of Vienna Airport; Kiyoshi Koinuma, Japanese Ambassador to Austria; and Akira Nakamura, Senior VP, EMEA, All Nippon Airways, took part in a traditional cake cutting ceremony to mark the occasion. 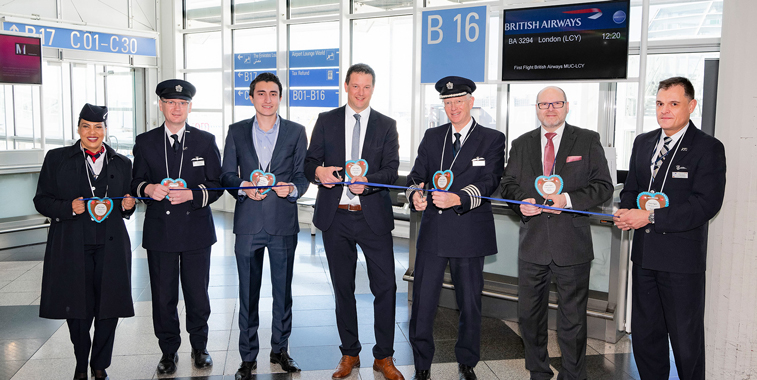 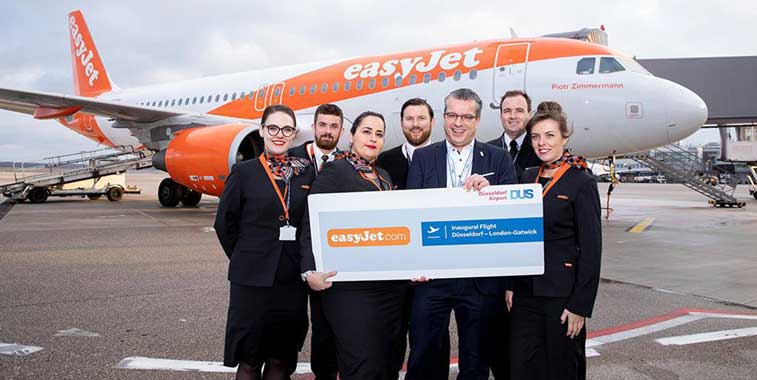 Düsseldorf Airport welcomed the return of easyJet flights from London Gatwick on 9 February. Ulrich Topp, Director Aviation Marketing, Düsseldorf Airport, joined the flight crew on the apron to celebrate the re-launch of services. The LCC previously served this 483-kilometre sector until March 2016 based on OAG data. 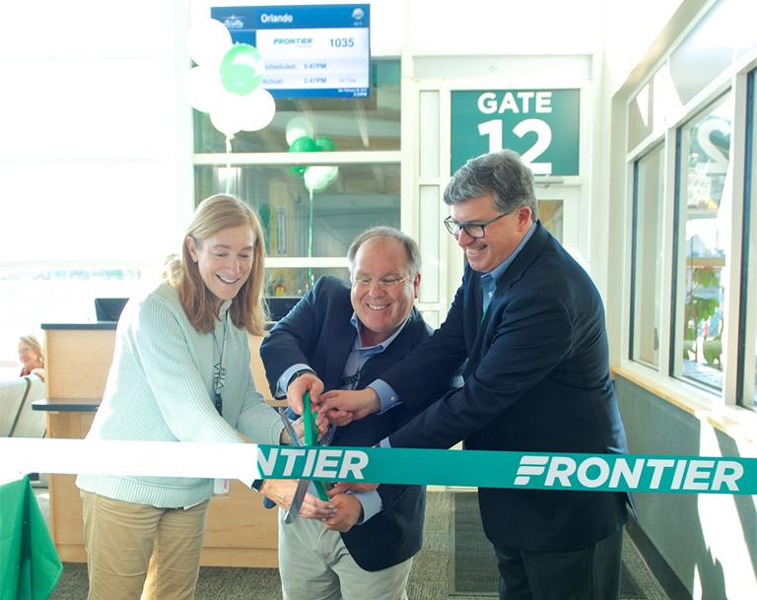 Frontier Airlines commenced flights from Orlando to Burlington on 9 February, a route it will operate twice-weekly (Wednesdays and Saturdays). Pictured at the ribbon cutting ceremony are: Karen Paul, Councillor, City of Burlington on the City Council; Gene Richards, Director of Aviation, Burlington Airport; and Jonathan Freed, Director of Corporate Communications, Frontier Airlines. The carrier will add a second route to Burlington, from Denver, on 1 May. 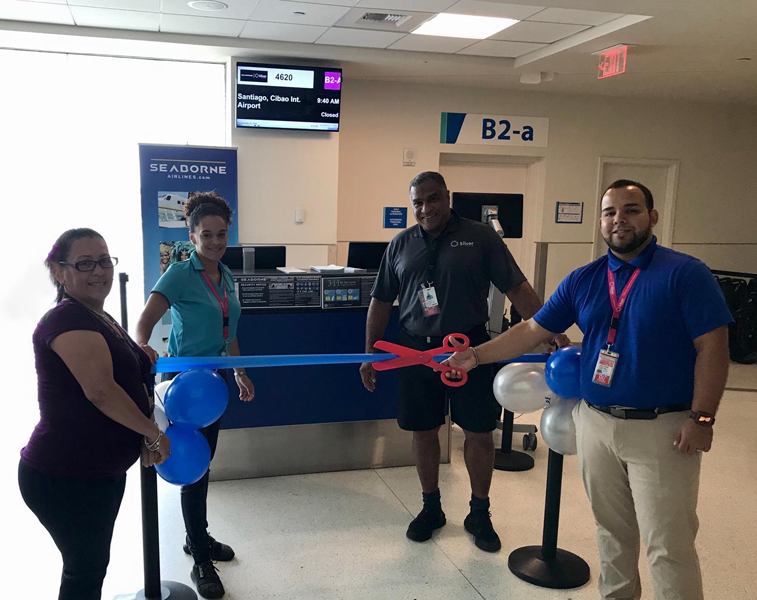 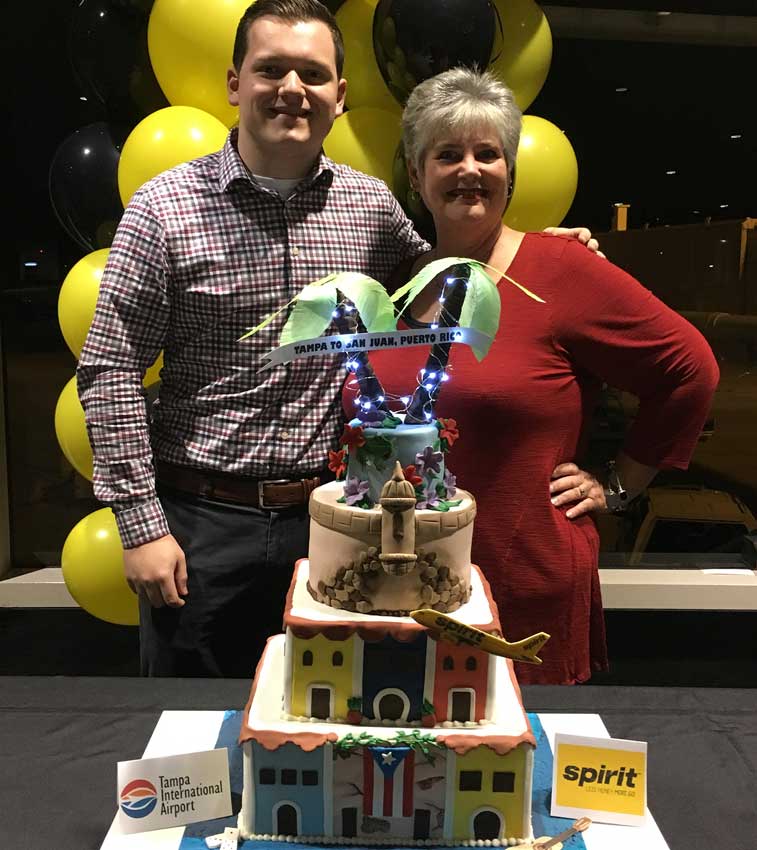 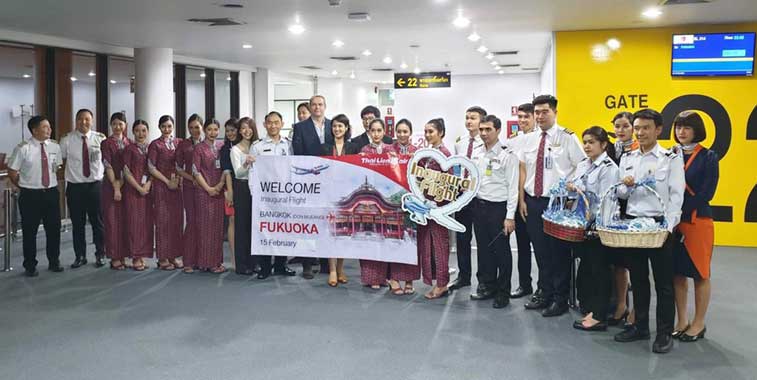 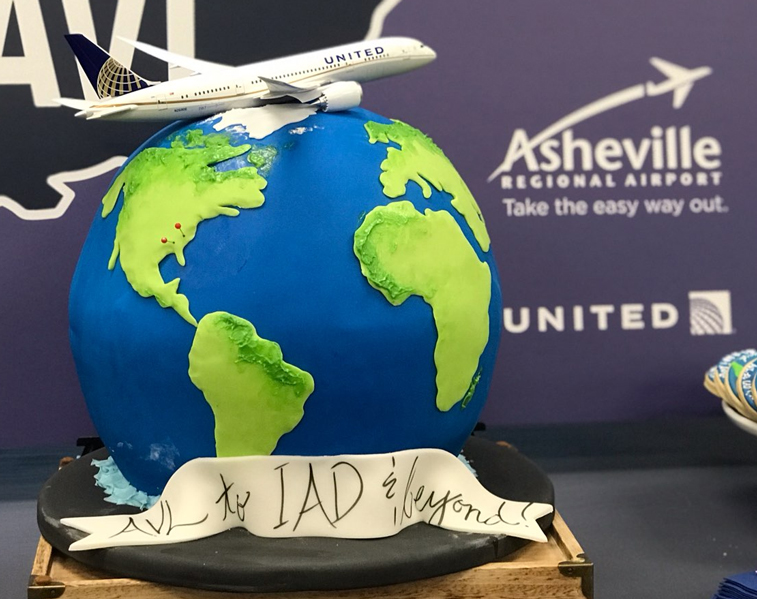 United Airlines launched twice-daily flights to Asheville from Washington Dulles on 14 February, with the former of the two airports baking this exceptional cake to mark the new service, highlighting the many opportunities that passengers have for travel via the airline’s US capital hub. No other airline links the two airports at this time. 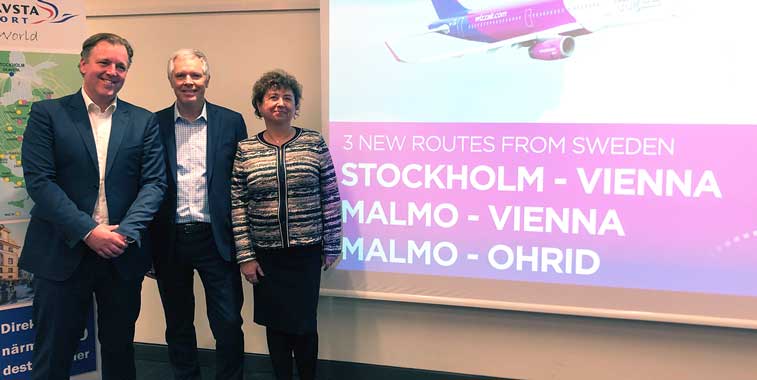 Johan Eidhagen, Chief Marketing Officer, Wizz Air (left), attended a press conference in Stockholm on 14 February ahead of the airline launching three new routes to Sweden. The links from Vienna to Malmö and Stockholm Skavsta both commenced on 15 February. The advertised connection from Ohrid to Malmö is scheduled to start from 18 March.