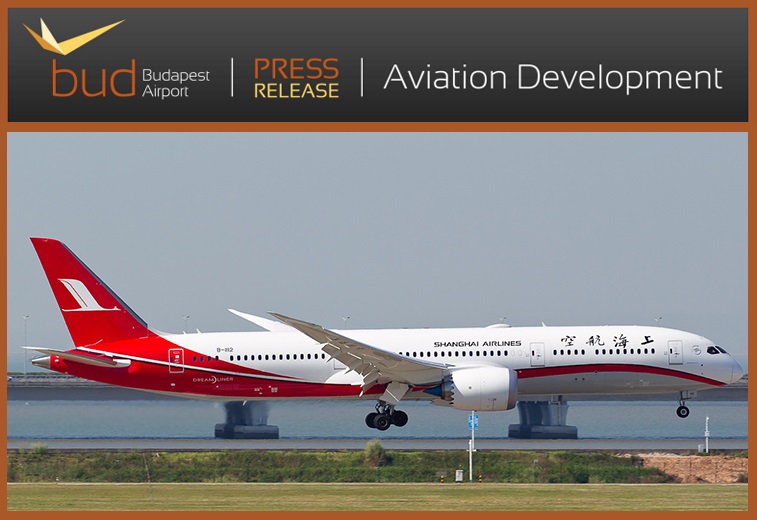 Shanghai Airlines, in partnership with China Eastern Airlines, has confirmed that it will begin a three times weekly service to Budapest from Shanghai Pudong starting 7 June, with the carrier using its brand-new 787-9s on the sector. The new city-pair service will introduce 41,000 seats to the Asian market from Budapest this summer.

Budapest Airport is delighted to announce another momentous enhancement in its route network development, with the confirmation that Shanghai Airlines, in partnership with China Eastern Airlines, will launch a three times weekly service between the Hungarian gateway and China’s largest city, Shanghai. Set to launch on 7 June, the 9,645-kilometre sector to Shanghai Pudong Airport will be operated by the carrier’s fleet of brand-new 787-9s.

Until now the Budapest-Asian market has been underserved, but this new service means Asia will become more accessible than ever, introducing an additional 41,000 seats to the Asian market during the season. Adding Shanghai to its network this summer will see Budapest provide more connections to several new Chinese cities, plus other Asian destinations including Hong Kong, Singapore, Osaka Kansai, Seoul Incheon and Tokyo Narita.

Commenting on the major efforts made to attract this important new service, Jost Lammers, CEO, Budapest Airport says: “We’re immensely proud to announce the arrival of Shanghai Airlines and the introduction of another direct link between Budapest and the Far East. Alongside the Ministry of Foreign Affairs and Trade, we’ve been working extremely hard on this project for many years to illustrate Hungary’s global economic strength and popularity.” Lammers added: “Shanghai is proving to be one of our major indirect Asian city pairs with an increasing number of Chinese river cruise passengers choosing Budapest as their arrival or departure point. With a potential market of more than 80,000 passengers per annum, the possibility of the service evolving into a year-round operation remains open. I have absolutely no doubt that this new route will be extremely popular and succeed in extending Hungary’s connections to the world.”

Budapest Airport’s route developments for 2019 include: