Spirit Airlines now transports two million passengers a year from Atlanta; offering 13% the number of departures on routes versus Delta 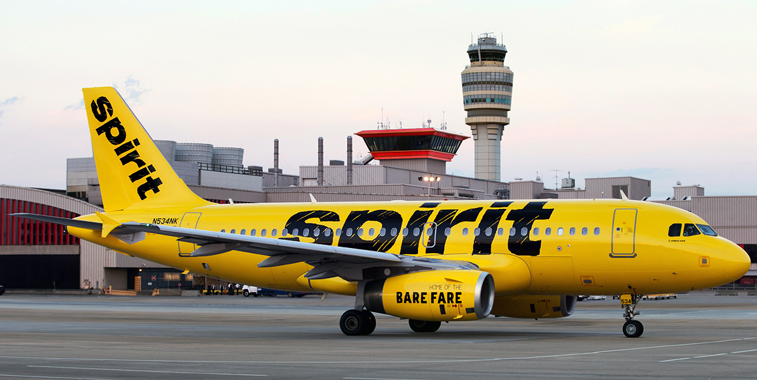 Spirit Airlines started its initial operations from Atlanta in 2006. In 2009, the airline was still operating a single route from Fort Lauderdale. However, over the past 10 years, the carrier has ramped-up its operations from the airport, with 19 routes scheduled to operate this coming summer season. Last year the airline grew its seat capacity from the airport by 18%, overtaking United Airlines to become Atlanta’s fourth biggest carrier.

Spirit Airlines is the fourth largest airline at Atlanta, after Delta Air Lines, Southwest Airlines and American Airlines, with the ULCC accounting for 2.3% of seat capacity market share at the world’s busiest airport in 2018. It has grown its market share from 2.0% in 2017, having overtaken United Airlines last year in the airline rankings, pushing the Star Alliance member down to fifth. Spirit Airlines was also the fastest-growing carrier among the airport’s elite, with it posting an 18% growth in capacity last year, while Delta grew by just 1.9%, Southwest 0.4%, with American reducing capacity by 1.0% and United Airlines 5.3%. The only other airline offering over one million seats a year from Atlanta is fellow ULCC Frontier Airlines, which grew its seat capacity from the airport by 9.7% in 2018.

Spirit Airlines set a record in 2018 when it surpassed two million passengers a year from Atlanta. This is based on a forecast conducted by anna.aero, with the airline having shown an average increase in monthly passengers from the airport of 19% for the first 11 months of the year according to data obtained from the Bureau of Transportation Statistics. Last year, Spirit Airlines accounted for 2.4% of passengers flying from Atlanta Airport according to the same source. 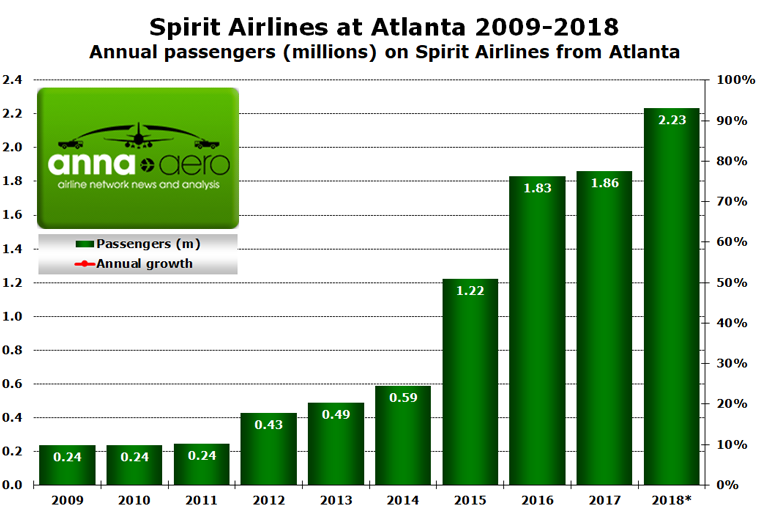 As stated, back in 2009 Spirit Airlines only operated a single route from Atlanta, with that being to Fort Lauderdale, it’s largest service from the airport today (more detail below). In 2010, a seasonal service to Myrtle Beach was added, however this was dropped at the end of 2011, with 2012 seeing services to Dallas/Fort Worth and Atlantic City being added, this being the year where the airline began its expansion mode from Atlanta. By S19 the airline will be operating 19 routes from Atlanta utilising 197 weekly departures (week commencing 7 June 2019), up 15% versus the 172 it operated during the same week last year.

Fort Lauderdale top route; Austin and Denver next to be added

Fort Lauderdale is Spirit Airlines’ leading route from Atlanta, accounting for 24% of the airline’s weekly departures from the Georgia state city. Offering 38 weekly departures on the route during the week commencing 6 March 2019, the airline is operating 40% of the number of departures that Delta Air Lines is performing on the airport pair over the same period. Given the SkyTeam member’s dominance at Atlanta, it is not surprising to learn that the airline serves all the routes that Spirit Airlines operates, with the ULCC averaging 13% the number of departures that the USB3 carrier performs on those airport pairs served by both carriers.The only new service added by Spirit Airlines in 2018 from Atlanta was New York Newark, a route launched on 6 September. 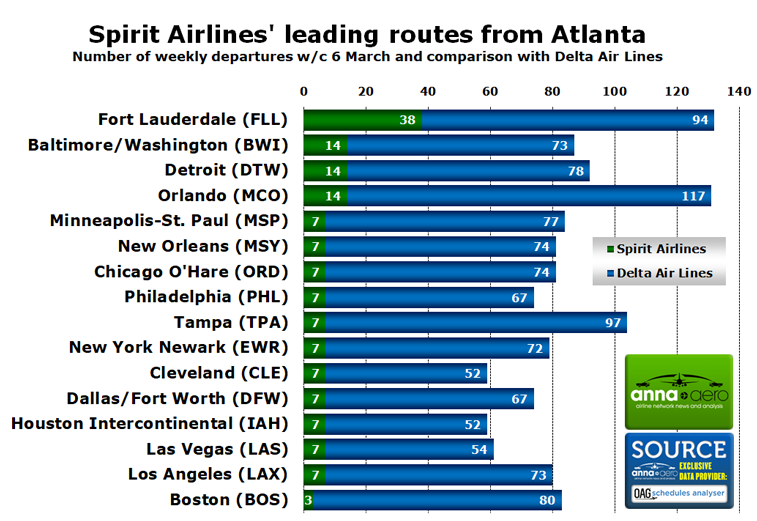 Along with the 16 routes showcased in the table, Spirit Airlines also provides a seasonal service from Atlanta to Atlantic City, this being its only route which faces no direct competition. The ULCC is planning to add a further two nodes to its Atlanta network in 2019, namely Austin and Denver, routes that are, not surprisingly, served by Delta. Services to the Texan city will begin on 23 May, with the year-round service poised to operate daily. Denver, a route which will be flown daily, albeit on a seasonal basis, will begin 2 May and operate until 4 September based on current scheduled data filed in OAG. 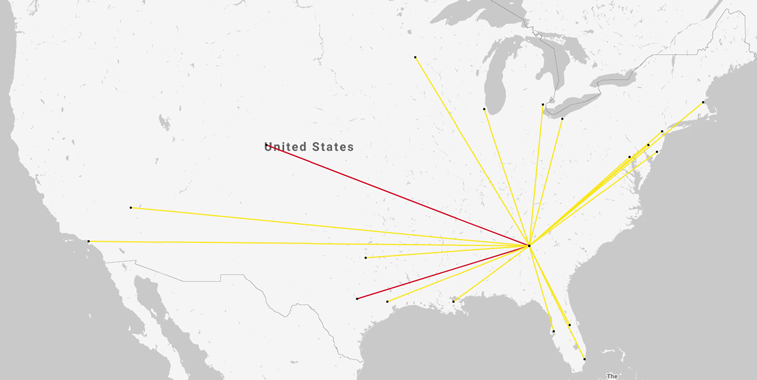 Spirit Airlines will offer 19 routes from Atlanta in S19, with the next planned routes to be added to the schedule being Austin and Denver (highlighted in red). The airline competes on all routes with Delta Air Lines bar Atlantic City.