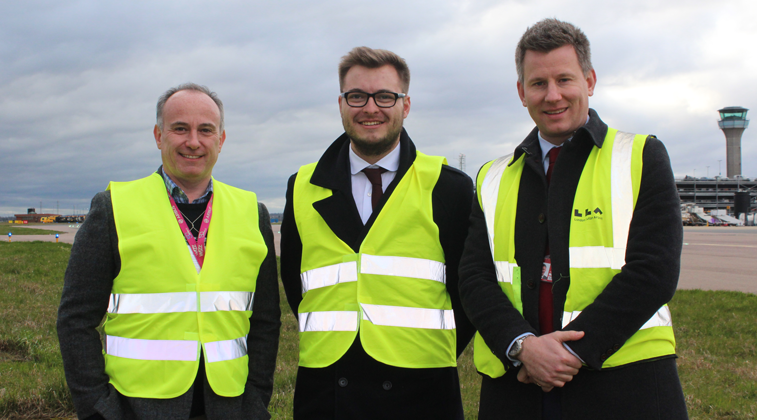 Pictured waiting on the airfield for the inevitable water arch salute that London Luton’s finest firefighters would soon give to Wizz Air’s first A321neo are: Owain Jones, MD, Wizz Air UK; Jonathan Ford, Aviation Development Editor, anna.aero; and Jonathan Pollard, CCO, London Luton Airport. The day was not only a celebration of the aircraft milestone, but also the airline’s recent route news, with it confirming new flights to Stavanger from 16 September. This announcement is also historic, as it become’s the carrier’s fourth route to Norway from Luton, and its 60th overall.

On 15 March Wizz Air operated its first ever A321neo service into London Luton, with the airline having took delivery of the type on 7 March. Owain Jones, MD of Wizz Air UK, said of the aircraft: “The arrival of the airline’s brand-new A321neo to our London Luton base is a major milestone for Wizz Air in the UK, both in terms of our industry-leading growth and our aim to become one of the greenest airlines in the sky. Wizz Air is proud to operate one of the youngest fleets in Europe, and this new aircraft decreases our environmental footprint even further.”

The day was not only a celebration of Wizz Air’s new aircraft technology, but also an occasion to rejoice in the airline’s decision to commence flights between Luton and Stavanger in September. The announcement of this service means that Wizz Air has 60 routes bookable from the London airport. When comparing this to easyJet, they currently offer 70 routes from Luton on either a seasonal or year-round basis. Wizz Air has nine aircraft on its UK AOC, with a further two, both A321s, joining later this year, meaning the carrier will have 11 units based at Luton. Based on OAG Schedules Analyser data, this summer Wizz Air is scheduled to offer around 5.22 million two-way seats from Luton, however this could still increase, while in comparison to easyJet, the latter is expected to fly just over 5.41 million from Luton. However, when comparing this year’s summer schedule to S18, Wizz Air is offering 14% more seats, while easyJet’s remains the same, showing that the former ULCC is certainly closing the gap regarding market share on the Luton-originating airline.

“We built the UK AOC for EU protection, and also to support our non EU-UK routes,” comments Jones to anna.aero. “It was originally designed for one or two aircraft, however then Monarch Airlines fell, we saw a commercial opportunity to expand here. Firstly we added more aircraft to take some of the W-pattern flying out of the schedule, and then looked at new opportunities from Luton. The UK aviation scene has been very different over the last year or so, and with the likelihood of more consolidation in the UK, it is likely going to allow us to develop even more opportunities from here, with new capacity allowing for even more new routes.”

“Wizz Air’s growth story started in 2004 here at London Luton, and every year they continue to go from strength-to-strength,” comments Jonathan Pollard, CCO, London Luton Airport to anna.aero. “In 2018, they flew 6.5 million passengers from here, and the scale of their destination growth is significant, with them now offering 60 routes from Luton.” Wizz Air’s first route to Luton was from Katowice, while for 2019 it will launch new routes from the airport to Krakow (launches 4 April), Bergen (1 July), Thessaloniki (1 July), Porto (2 July), Turku (2 July), Oslo Gardermoen (16 September), Stavanger (16 September) and Catania (17 September). “Wizz Air has provided new markets for Luton, and London as a whole, and the size of some of these markets shows that what they have created from here has been a success,” states Pollard. 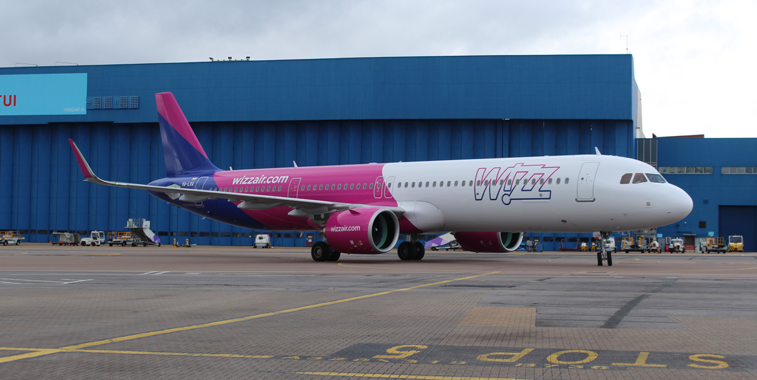 A celebration of new aircraft technology. Wizz Air flight W62205, operated by HA-LVA, the first ever A321neo to join the carrier’s fleet, landed at London Luton from Budapest just after 15:30. Having landed on Runway 26, it then taxied and parked on Stand 5 where it would be prepared for its turnaround to Budapest, plus a photo shoot. 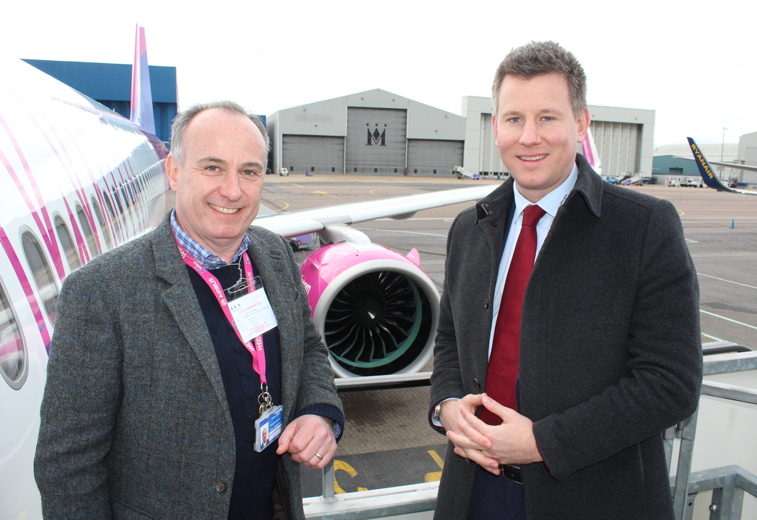 Of course, one of the most distinctive features of the A321neo, with neo meaning “new engine option”, is its engines, with them resulting in 15% lower fuel consumption per aircraft, 8% lower operating costs, reduced noise production, and a reduction of nitrogen oxide emissions by at least 10% compared to the original A320 series, as well as an increase in range of around 900 kilometres. Here, Owain Jones, MD Wizz Air UK, and Jonathan Pollard, CCO, London Luton, showcase the new technology. Wizz Air’s first A321neo is fitted with Pratt & Whitney PW1100G engines. Can you tell the difference? Along with the engines, Wizz Air’s A321neos are built with the revised cabin-flex fuselage. What this means is that unlike its other A321s, there is no main cabin door before the wing, instead having four emergency over wing exits, as shown here with the example of the neo compared to one of the airline’s existing A321s which taxied before HA-LVA received its water arch salute. This allows for an extra row of seats, with Wizz Air’s A321neos having a 239-seat configuration. London Luton’s firefighters sent off flight W62206 in fine style with this water arch salute, which is even more impressive considering the strong winds that battered the London area on 15 March. Once baptised, the aircraft taxied out to Runway 26 for departure back to Budapest. 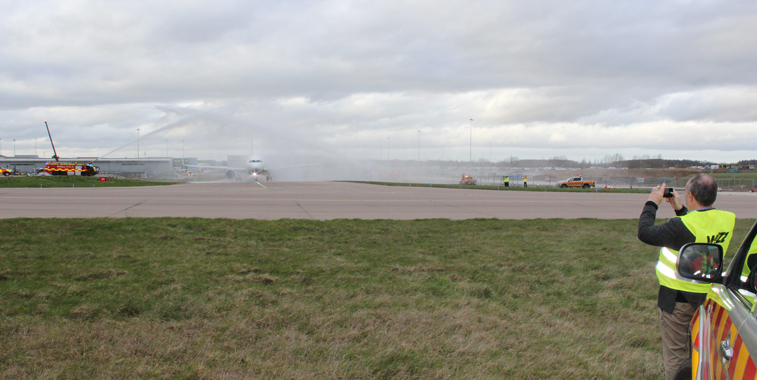 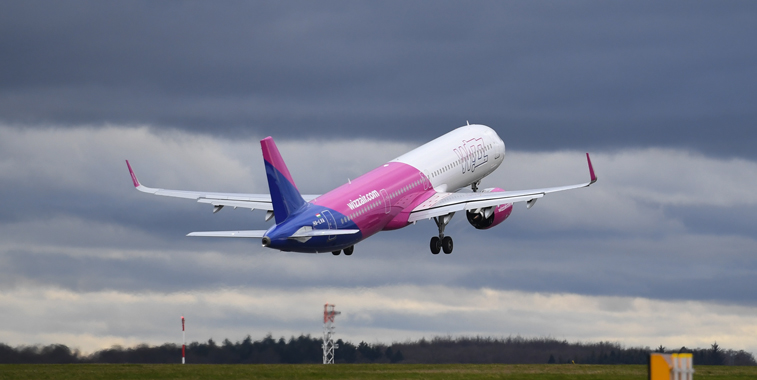 After a short taxi, flight W62206 quietly powered down Runway 26 and rotated for its two-hour flight back to Budapest. anna.aero would like to thank London Luton Airport and Wizz Air for allowing it to take part in proceedings to celebrate the carrier’s first day of A321neo operations from the UK airport.