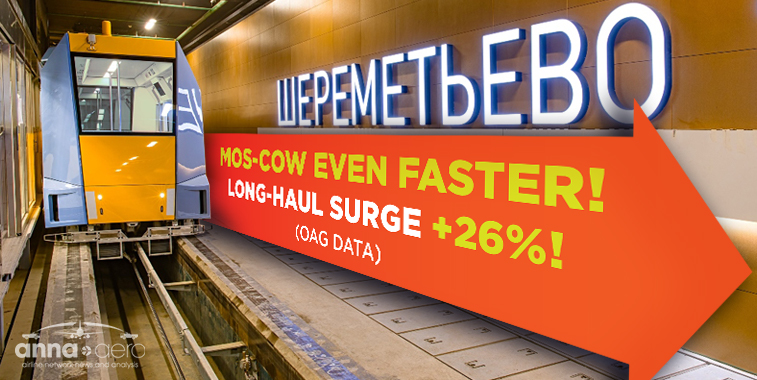 Moscow Sheremetyevo Airport is Europe’s best hub for long-haul seat capacity growth in S19 based on OAG Schedules Analyser data, with it reporting a strong 26% increase in long-haul seats. It’s certainly a case of Mos-cow even faster, as the hub’s growth has meant it’s overtaken London Gatwick and Munich for long-haul capacity.

With the S19 season fast approaching, anna.aero has taken a look at how Europe’s long-haul capacity is shaping up for the upcoming period, starting Sunday 31 March, analysing which leading airports and airlines are charging the growth in S19. It should be noted that for this analysis, a long-haul route is measured as a service which operates over 4,500 kilometres, and is based only on published data from OAG schedules, with final tweaks still likely to be made throughout the summer season.

So much for sanctions, looking at Europe’s top airports for long-haul capacity in S19, there is one airport which certainly stands out from the rest, with Moscow Sheremetyevo indicating a 26% increase in long-haul seats for S19. One of the reasons for this surge is due to hub carrier Aeroflot, with it highlighting a 10% increase in its long-haul capacity from the Russian hub this summer versus S18. However, it is not just Aeroflot growing from Sheremteyevo, with Beijing Capital Airlines (97% increase in long-haul seats in S19 versus S18), Nordwind Airlines (87%), Lucky Air (27%), China Southern Airlines (11%), China Eastern Airlines (5.7%) and Sichuan Airlines (1.2%) all posting increases in seat capacity this coming summer. Along with Sheremetyevo, a further two airports in the top 15 (highlighted in light green) are showing a double-digit increase in long-haul capacity for S19, with seats on sectors over 4,500 kilometres up at Lisbon and Barcelona by 12% and 14% respectively. 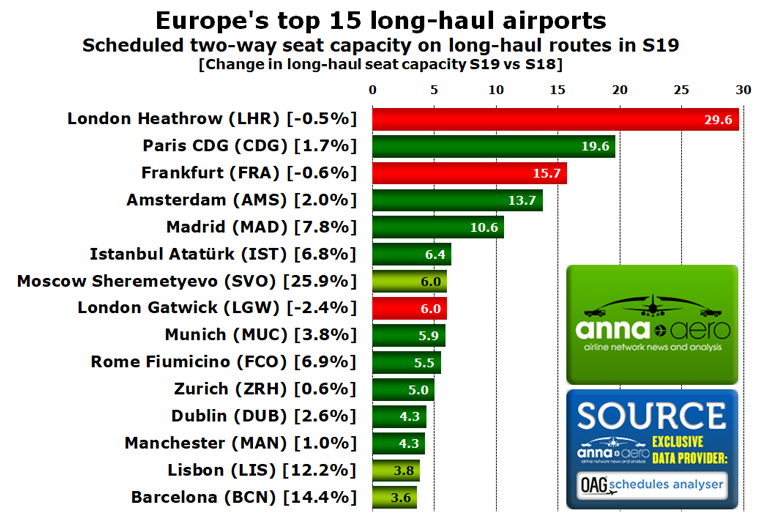 What is interesting to note is the cut in capacity at London Heathrow and Frankfurt, the top and third largest airports for long-haul capacity in Europe. Heathrow is currently showing a 0.5% reduction in seat capacity while Frankfurt is reporting a 0.6% reduction. For Heathrow, the biggest cut is from British Airways, with it indicating that it will operate just under 49,000 less departing seats on long-haul routes in S19, a cut of 1.0% versus S18. However, Virgin Atlantic (Heathrow’s second largest long-haul airline) shows a tiny 0.2% increase in long-haul seats in S19, while American Airlines (third; 4.8%), Delta Air Lines (seventh; 9.3%) and Cathay Pacific Airways (ninth, 3.2%) are airlines in the top 10 showing long-haul growth for the upcoming summer season. For Frankfurt, it is a similar case, with the leading long-haul operator at the airport – Lufthansa – reporting a 1.7% cut in seats on sectors over 4,500 kilometres from the hub this summer. However, Condor, Frankfurt’s second largest long-haul operator, has a 1.5% increase in long-haul seats in S19, with United Airlines (third; 5.5%), Air Canada (fourth; 0.1%); Air China (sixth; 3.9%); Singapore Airlines (seventh; 5.7%) and Qatar Airways (tenth; 26%) are all airlines in the top ten at for long-haul seats at Frankfurt showing growth. Apart from Heathrow and Frankfurt, London Gatwick (all highlighted in red) is the only other major long-haul airport in Europe showing a reduction in capacity within the market for S19 based on currently schedules.

Of the top 15 long-haul operators in Europe, five are reporting declines in their seat capacities for S19, including four of the top five. One of the most notable is Emirates, with it reporting a 4.0% cut in seats on European routes in S19. However, one of the likely reasons for this is due to the carrier reducing frequencies on a number of services for the closure of one of Dubai’s runways for essential work during April and May. While this is a limiting factor for Emirates, one carrier which is certainly making different strides is fellow MEB3 airline Qatar Airways, with it showing a 14% increase in seats this summer. The biggest growth in seats however comes from Norwegian, with it growing ever so slightly more that the Doha-based airline. 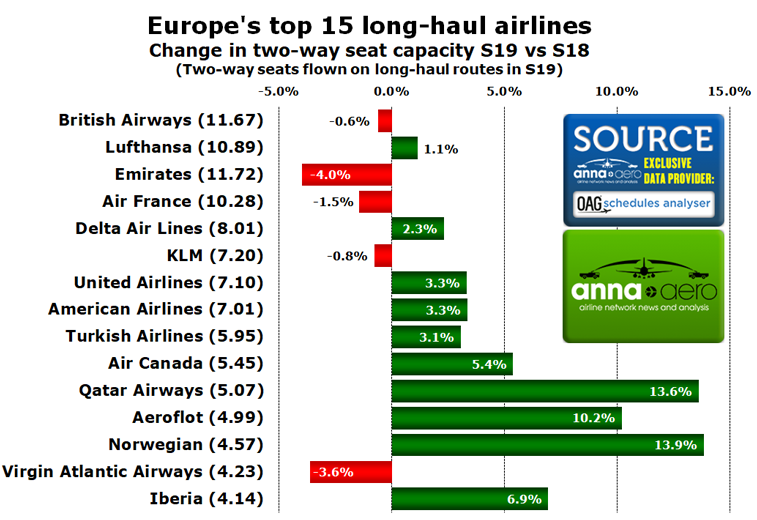 Airlines outside of the top 15 are also showing mixed results for capacity changes to/from Europe in S19. Between 16th and 30th place, the airline reporting the most solid rise in long-haul seat capacity is TAP Air Portugal (19th place), with it posting a 12% rise in long-haul seats this coming summer, while the the worst carrier in this category is Thai Airways (25th), with it expected to offer 4.4% less seats from Europe versus its seat count in S18.

Since S18, three new long-haul entrants have paved their way into the European aviation scene. Shenzhen Airlines, which inaugurated flights to London Heathrow in October, will continue serving the UK airport this summer, while two new airlines joining in S19 are IndiGo and Juneyao Airlines. IndiGo will initiate a route between Delhi and Istanbul Atatürk on 20 March, with Flightradar24.com showing that initial services will operate via Doha. The route from 25 March will operate twice-daily. Meanwhile, from June, Juneyao Airlines will begin services to Helsinki, operating a daily 787-9 service from Shanghai Pudong. Along with gaining three new long-haul carriers, two have also been lost since S18, with Primeria Air (collapsed) and Air Seychelles, ending flights to Paris CDG on 23 April 2018, having left the entire European market. 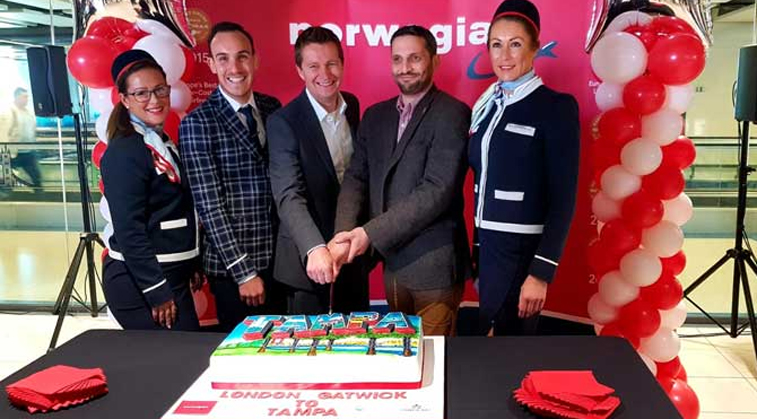 One of the last long-haul routes to be launched by Norwegian last year was between London Gatwick and Tampa, a route that will continue to operate this summer season. Norwegian is the fastest-growing major long-haul airline in Europe for S19, with it planning to operate 14% more two-way seats on long-haul flights this summer.