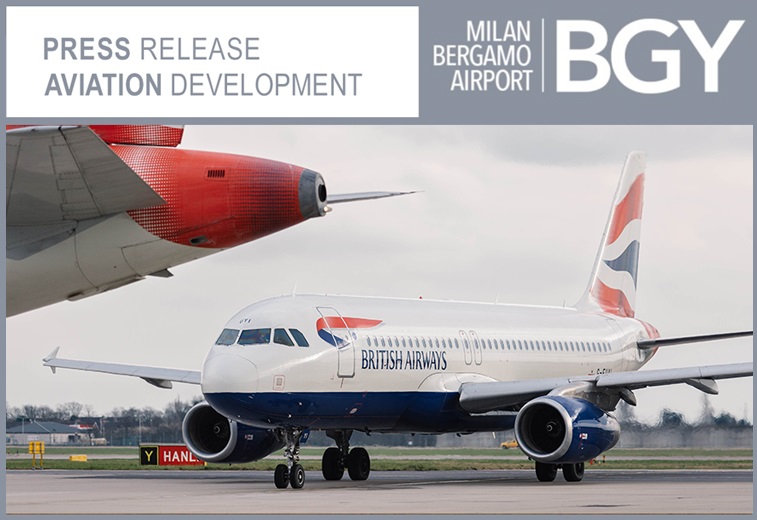 British Airways has confirmed that from 1 September 2019 it will begin a six times weekly service to Milan Bergamo from London Gatwick. Just under 3.06 million passengers flew between London and Milan in 2018, growing by 5.1% versus 2017. With the market growing at a strong level from such a high base of customers, it’s great to see that British Airways wants to grow its offering in the market,” comments Giacomo Cattaneo, Director of Commercial Aviation, SACBO.

Milan Bergamo Airport has announced that from 1 September 2019, UK flag carrier and oneworld member, British Airways, will begin operations from the airport. As the airline confirms it will operate six weekly flights between London Gatwick and Italy’s third largest gateway, the route becomes Milan Bergamo’s third London link and the first to offer a business class product.

“Just under 3.06 million passengers flew between London and Milan in 2018, growing by 5.1% versus 2017. With the market growing at a strong level from such a high base of customers, it’s great to see that British Airways wants to grow its offering in the market. By giving its passengers the opportunity to fly to Milan Bergamo, this is notably the carrier’s only flight option to Milan from London Gatwick,” comments Giacomo Cattaneo, Director of Commercial Aviation, SACBO. “Not only is this service great for those travelling for business, but with British Airways already serving Genoa, Turin, Venice and Verona from Gatwick, Milan Bergamo is the perfect fit for the airline, allowing UK leisure passengers wanting to explore Northern Italy a Milan flight. The link will also provide an option to return to the same UK airport that they started their journey from, and vice versa when wanting to travel the region.”

Adding further comment, Cattaneo states the importance that this route strategically plays in the London-Milan market: “While it is great that we can introduce a well-known brand to this important market for Milan Bergamo, it is also critical to stress that this service breaks the Milan monopoly that is seen at London Gatwick, while also giving the 8.63 million people that reside in South London and its surrounding counties direct access to the heart of the Lombardy Region. Gatwick is the second largest airport in London for Milan passengers – accounting for 29% of annual traffic between the two cities in 2018 – so it’s encouraging that British Airways has seen the opportunity to give passengers an alternative carrier to fly on, and crucially, another airport option in Milan.” Cattaneo added: “It is also important to note that the service gives the 880,000 people that fly between Gatwick and Milan annually a business class flight option, with this level of traffic making Milan the seventh largest market from Gatwick. As the UK airport supports more than 46 million passengers a year, British Airways is creating a great opportunity in the market, plus expanding flight connectivity options via Gatwick to the 10 million people in our catchment.”

British Airways will become the second airline after Ryanair to fly between Milan Bergamo and London. British Airways services to Gatwick will be flown utilising the carrier’s 177-seat A320s.

MIlan Bergamo Airport’s confirmed route developments for 2019 so far include: