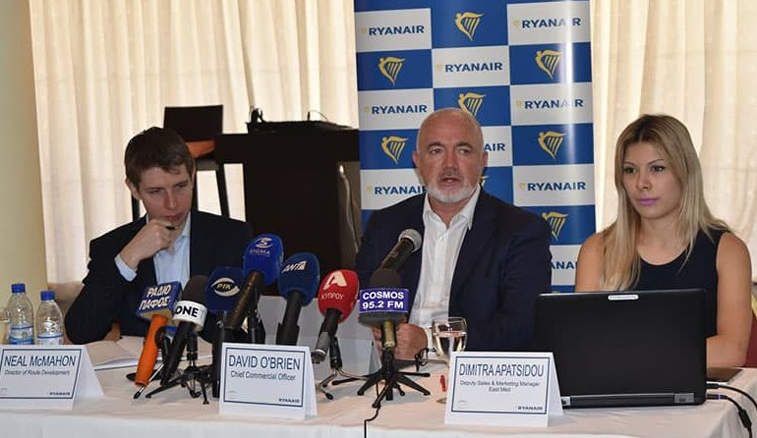 Ryanair is Cyprus’ biggest carrier in S19, up from fourth in S18, with it growing seat capacity from the isle by 22% this summer, with the ULCC taking advantage of market gaps and opportunities. For W18/19, the airline offered new routes to Bournemouth and Liverpool from Paphos, with it also continuing several routes which launched in S18 from the airport into W18/19. The carrier increased winter seat capacity from Paphos in W18/19 by 114% versus W17/18.

It’s safe to say that the aviation industry in Cyprus has been interesting in recent years, overcoming the adverse market conditions, including the collapse of carriers with significant operations. However, the market continues to grow, with passenger numbers for January and February combined up 7.6% versus the same two-month period of 2018, with Larnaca and Paphos airports handling 834,667 passengers during the first two months of 2019. This has been made possible due to the airlines taking advantage of the market gaps and exploring new opportunities, with many reporting double-digit growth.

Cyprus’ two leading airports of Larnaca and Paphos handled a record number of passengers in 2018, with the two greeting 10.94 million passengers, up 6.7% on the year before. Since 2013, the number of people flying from the two airports has increased by 66%, growing from 7.04 million to 10.94 million last year. Since the airport returned to year-on-year growth in 2013, the average yearly growth rate for the two airports combined is 9.4%. 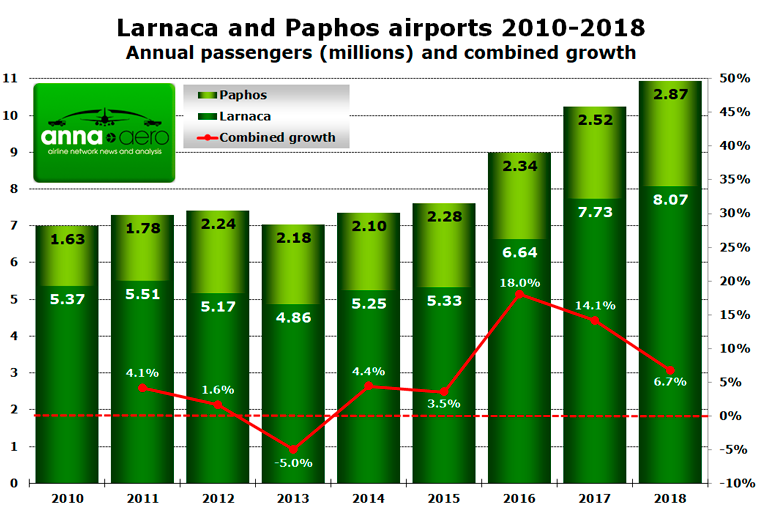 Most of Cyprus’ growth has been at Larnaca, with it handling 3.21 million more passengers per annum then it was five years ago, representing a growth rate for the airport of 66%. However, Paphos is also making strides, with it having grown its passenger numbers by 32% within the same five-year period. Last year Paphos was the fastest-growing facility of the two, with its 2018 passenger numbers increasing by 14% versus the year before, while Larnaca witnessed a 4.4% rise, even with the collapse of Cobalt. In fact, Paphos saw a greater net increase in passenger numbers in 2018, greeting 350,000 more passengers last year over 2017, while Larnaca processed 340,000 additional passengers.

What should be noted about Cyprus is its potential of being a year-round destination, with this evident in the growth patterns being encountered from Larnaca and Paphos airports. During the winter season months of 2018 (January-March and November-December), traffic from the two airports grew by just under 11%, while in the summer period (April-October), passenger numbers grew by 5.7%. With that, the greater growth in winter has helped reduce the island’s seasonality profile. When using anna.aero’s Seasonal Variation In Demand (SVID) Calculator, Cyprus’ seasonal score has gone down from 25.17 in 2017 to 23.19 in 2018. With the airports seeing strong growth for the first two months of 2019, with airlines such as Ryanair adding winter capacity, this score is likely to reduce further this year.

Ryanair has become Cyprus’ leading carrier this summer, with the airline poised to grow its seat capacity by 22% in S19, including the introduction of new routes to Mykonos and Kiev Boryspil. The ULCC has climbed from fourth spot last year, overtaking TUI Airways, Aegean Airlines and Cobalt (collapsed) in the process to become the leading airline. Another big mover up the airline rankings is Wizz Air, going from eighth to fourth, a result of it increasing its Larnaca capacity by 39% this summer, with new routes from Debrecen and Krakow being launched later this year. Jet2.com has also overtaken easyJet to become the fifth largest airline, having increased its seats to the island by 12%, however easyJet too has grown its seat offering, operating 5.5% more seats in S19 versus S18. 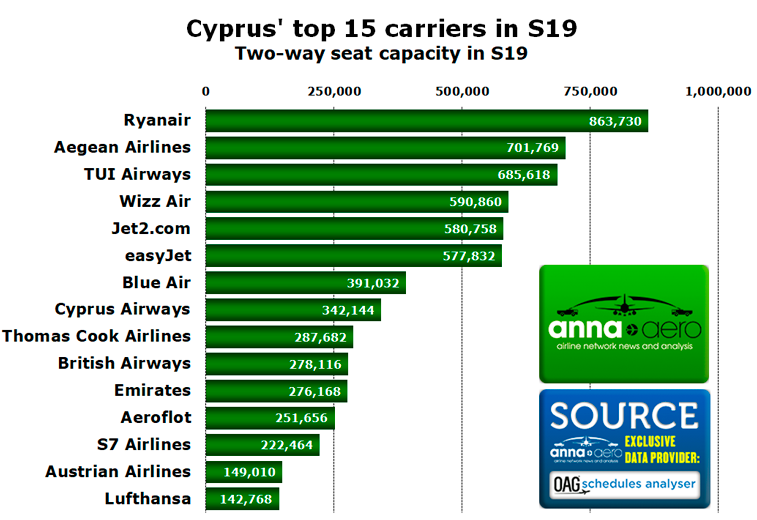 However, it is not just LCCs which are growing in Cyprus, with Cyprus Airways (61% growth in seat capacity in S19 versus S18), British Airways (4.5%), Aeroflot (4.3%), S7 Airlines (5.2%) and Lufthansa (1.9%) all showing sustainable levels of growth this coming summer. Along with existing airlines growing in the market, three new entrants will make their way into Cyprus’ aviation market in S19. SkyUp Airlines, a Ukrainian carrier which launched scheduled operations recently, will link Larnaca with Kiev Zhuliany and Kharkiv, while Kuwait Airways will begin services from its home market to Larnaca in June, a route it will operate twice-weekly according to the airline’s booking engine. Finally SWISS will launch a seasonal service between Geneva and Larnaca in July.

In 2018, the UK market accounted for just under 27% of seats from Cyprus. However, this has fallen from a market share of 31% in 2017. While the UK market last year did see a slight tumble in capacity, a result of Monarch Airlines going into administration in October 2017 and Aegean Airlines ending its route to London Heathrow at the end of the S17 season, it still remains the top country market from Cyprus. Wizz Air entered the market in 2018, while easyJet (2.6% increase in seats between the UK and Cyprus in 2018), Jet2.com (39%), British Airways (4.1%), Ryanair (18%) and Blue Air (18%) having all grown their operations in the country market in 2018. 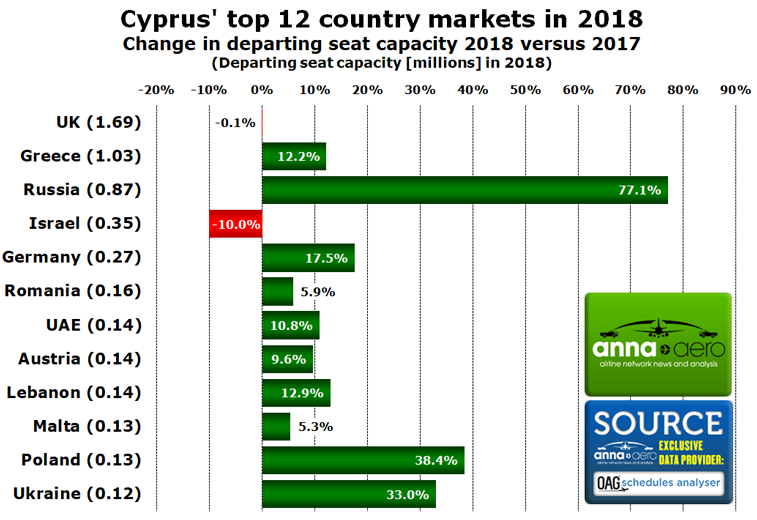 Despite the drop in seats to the UK, a number of Cyprus’ top markets thrived in 2018, particularly Russia, Germany, UAE, Lebanon, Poland and Ukraine which all experienced double-digit growth last year in scheduled seat capacity. Russia’s exceptional growth is down to Rossiya Airlines entering the scheduled market last year, however it would appear that in 2019 it is returning to charter services only between the two nations. It operated over 333,000 scheduled departing seats from Cyprus in 2018, making it the largest carrier between Russia and Cyprus. Other airlines did advance capacity as well, with Aeroflot increasing its seats numbers by 5.3% in 2018, Pobeda 29% and Cyprus Airways by over 150%. Nordwind Airlines and Azur Air also entered the scheduled market last year according to OAG Schedules Analyser data. One new country market this year is Kuwait, a result of Kuwait Airways intending to serve Larnaca. 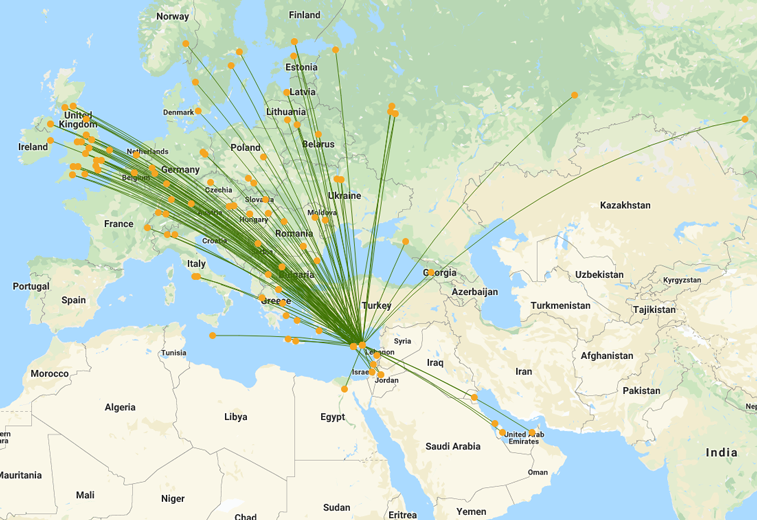 Cyprus’ route network clearly demonstrates the power of the UK market to the country. One new country market for Cyprus this summer is Kuwait, with Kuwait Airways starting flights to Larnaca in June. The expansion of Wizz Air, which will grow by 39% in S19 from Larnaca to become Cyprus’ fourth largest airline, has helped a number of countries in Eastern Europe to see double-digit growth regarding seat capacity to Cyprus. SWISS and SkyUp Airlines are new airlines for S19.